Pete, Doyle and I skied off the top of 5,710' Mt Ascension, just outside of Seward on Monday. Conditions were epic for mid-July. We had bluebird skies, breathless wind and corn that rivaled the best of May.

View Larger Map
Pete and I had been discussing the idea of getting the glaciated north side of the peak that towers nearly 4,000' above Lost Lake for the past week. The current weather cycle for the last couple of weeks has been dismal though. We're caught in the wash cycle: 2-3 days of rain, followed by a 12-36 hour window of nice weather between storms. The good news, the snow's just not melting and there's skiing in places that are normally lush tundra this time of year.
The rainy Eastern Peninsula is no exception. The ultra popular Lost Lake Trail still has remnant patches of snow on it, and the lake itself is holding a slushy covering of ice around its shores.
As a new storm rolled in Friday evening, It began to look like the stars, the moon, my work schedule and Southcentral weather were about to combine to produce a clear window Sunday through Monday and give us just enough time to make the accent and more important, descent, a reality.
Then, as if on cue, I got hit with the worst stomach bug, no wait, the only stomach bug, I've had in 10 years. Suffice to say, it knocked the you don't want to know what out of me that night and left me laid up and in rough shape Saturday despite the fact that we had 80 people in camp for a corporate tournament.
It looked Ascension was off.
After a long day, I slept for 12 full hours Saturday night and awoke feeling much like the sky above Sunday morning though, with the sky breaking apart and a sun starting to shine down.
The forecast was perfect, I called Pete and we planned to head to Seward in the afternoon. 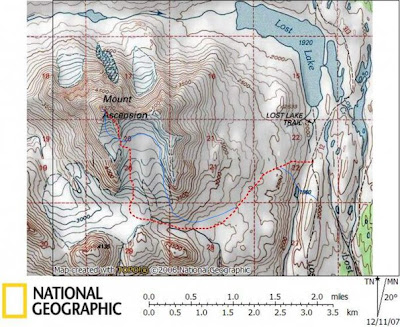 I stole this nice map from Keith, who climbed the peak last July with Edie, Emily and Kyle. Thanks Keith. 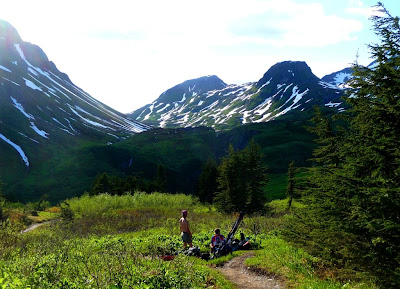 We hit the trail around 5 and headed up to the alpine lake. 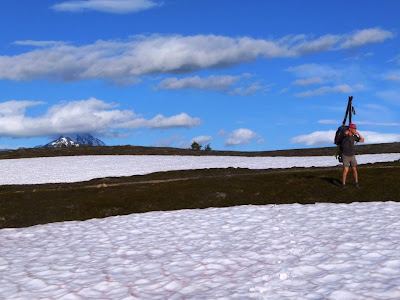 Doyle, up on the plateau looking for a good spot to camp. 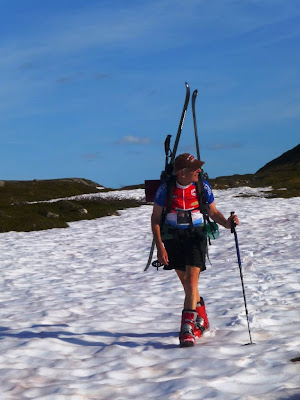 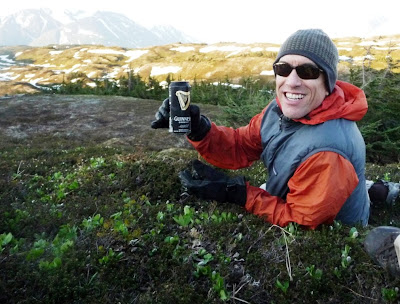 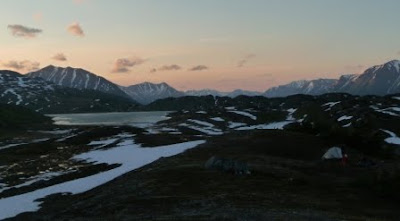 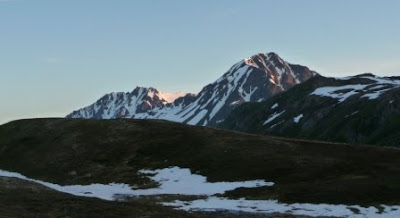 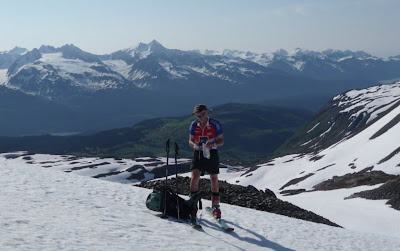 The next morning we headed up the bench below the peak, climbing for maybe 45 minutes including a stop to fill up on water before we made it to a good linear patch of snow that we could skin on. 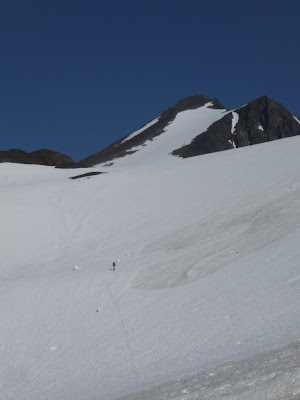 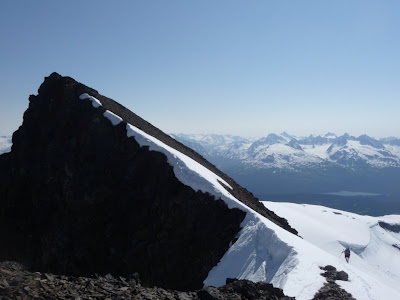 Pete, with a sub-summit behind him. Doyle destroyed the climb, blasting upward on his skins to the last foot of snow. Pete and I had our tails between our legs though. About 2/3 the way up the summit field, we opted to scoot across to a vertical band of scree and scramble the rest of the way up to the skyline ridge. 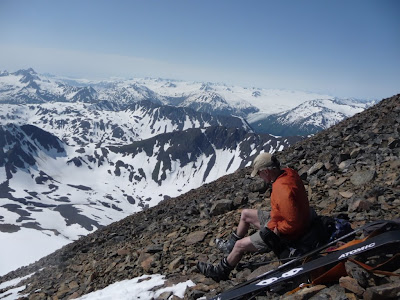 The snowfield clawed up the mountain's neck to within about 200' where we left our skis and scrambled the remainder to the top. 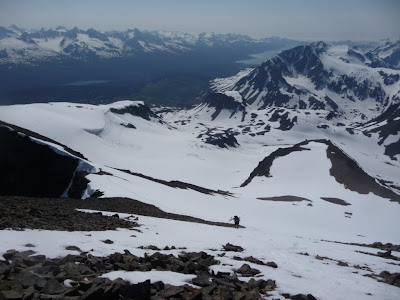 A good view of the summit field descent with the glacial bowl to the left. 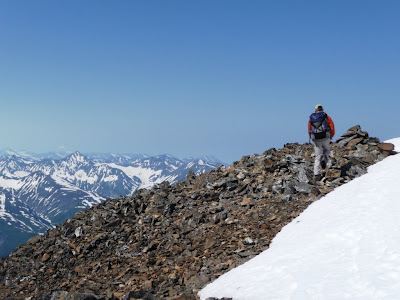 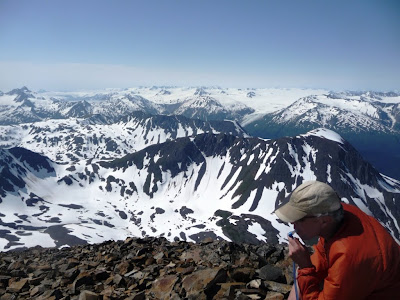 The Harding Ice Sheet with Exit Glacier in the center right. 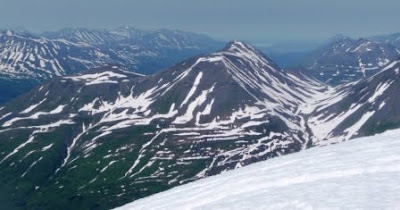 Looking west we could see all the way to the Central Peninsula with Skilak Lake in the distance. 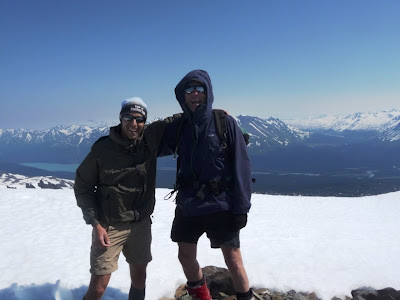 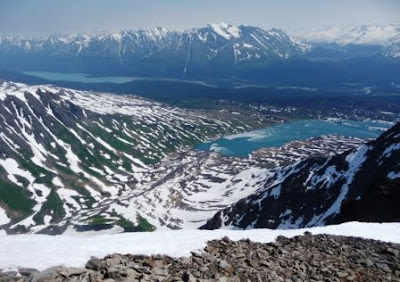 Lost Lake, with the south end of Kenai Lake past that and the aptly named Snow River Drainage beyond that. 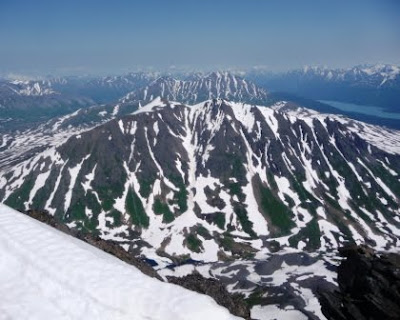 Looking north we could see all the way the mountains north of Turnagain Arm and had it been a little bit clearer we might have seen the Alaska Range. To the south we could see into the Gulf. 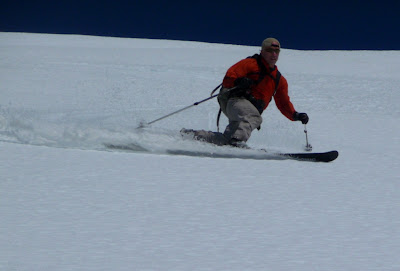 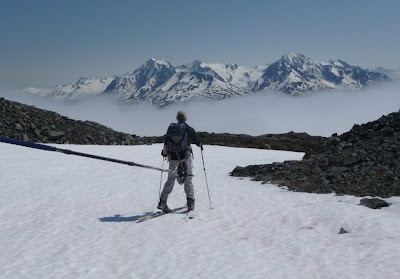 The descent was simply awesome, our timing was perfect and we dropped down bast the glacier before the snow really began to get sticky.
Just on time, a new storm was working it's way in from out of the Gulf. We watched as clouds were pushing over the farthest southern edges of the Peninsula while on the summit, and as we dropped off the glacier, a thick bank of fog rolled in our of Resurrection Bay obscuring everything.
We picked our way through the obscurity and soon enough the angle of repose fell enough that I split my board and went into tele mode as we worked our way back around the mountain trying to stick to our climbing route and avoid a deep gorge. 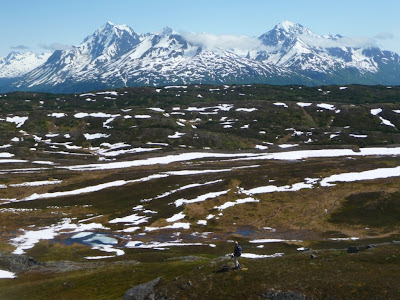 The fog bank eventually lifted enough and we were able to ski to within about 100' vert of the trail by skiffing over tundra to connect up snow patches.
From camp, the tour took about 5 hours.
Posted by Dante at 8:26 PM

Dante, what a great post. Thank you for the time it took to write about your adventure. Ed Schmitt

Thanks for recording your trip with my brother Tony. Love the pics. Robert Doyle

After three years of wanting to do it,I got to have a great trip with Pete and Dan. Thanks for the inspiration.

After three years of wanting to do it,I got to have a great trip with Pete and Dan. Thanks for the inspiration.

Thanks for the trip beta and route. We're looking to ski it in the next few months and appreciate your efforts to post this. Cheers!