It only took 4 years to convince Andrew, also known as Bernie, to make a trip to the north and see what the heck I was doing up here.
Well, OK, and like 4 years worth of airline miles too because, after all, it is a little pricey to get up here.
This post is waaaaay late, but here it goes.
Andrew flew in on July 27. It should be noted for the record, that I literally lost nights worth of sleep in advance of this trip over the weather, and a huge front that surged in over the Bering a few days prior to his arrival did not help my liver...but despite this, we lucked out BIG time.

Andrew had shipped up a mountain bike and a cross bike earlier in the week, and being a super great pal, if I don't say so myself, I assembled the former for him so we could hit the road early Saturday morning and go to Seward.
We started the trip by meeting up with Adam and Brian and riding the Lost Lake Loop, starting out at the Lost Lake TH and climbing up to the lake, riding Primrose down to the junction of the Iditarod Trail, and taking the latter back to Seward.
Unfortunately, we were socked in up high, so Andrew just had to take our word for it that the views were out of this world, + 10.
Despite this, the trail is in awesome shape, very dry, and fast.
And though there were no views of mountains, there were a fair number of runner headed from Primrose to Lost Lake in the opposite direction of our travel, more than a few of them being rather slender, athletic, and female; mostly running in pairs.
Somewhere headed down Primrose Trail, after perhaps the dozen'th of these pairs came by, Adam and I were stopped, when Adam asked "If he thought my friend might be wondering about all these girls."
Indeed, I had had the same thought now too, was wondering if Andrew would comment.
AS if on cue, Andrew came clattering down the hill (keep in mind this is a guy who could barely get over a small stick some 4 years ago on a mountain bike), and had not come to s top when he began deriding me for my complaints of there being a lack of attractive women in the state of Alaska...should have seen that coming.
Anyhow, here's a few photos from Lost Lake... no runners, sorry.


﻿﻿﻿
We headed from Seward to Sterling, where we base camped at fish camp for the next few days.
The next day Adam met up with us again and we drove out to the Resurrection Pass TH in Cooper Landing and dropped off Adam's car, piling into mine. We then headed to the Devils Pass TH to ride up Devils Pass Trail to its junction with Res, head north on Res to East Creek, back track back up the pass, and ride out to Cooper.
The trail was also fantastic, rock hard, and crazy fast. Though the skies were still overcast, at least we could see the mountains. Additionally, Bernie started laying it down on the climbs, leaving Adam and I to give chase. I was outmatched, and sulked in the back until I could get my revenge on the descents! Actually it was quite fun, and the trail was so fast on the way out for a while we were pace lining. Whoever thought that would be possible on Res. I was almost annoyed at how good the trail was as I felt, much like the parade of women that had gone by the other day, Andrew might be getting the wrong impression! 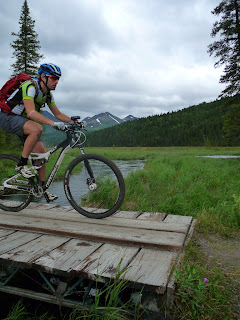 Monday we took a "rest day." By rest, I mean, get up long before the sun rises ... which is not too long after the sun sets ... and go catch sockeye with Angelo. We all caught our limits.

Tuesday, we packed up our stuff, and loaded up the car to start making our way back toward Los Anchorage. We were feeling pretty good, and decided to go ride the south end of Johnson Pass trail to the pass and back. We ran into bad ju-ju early though. The trail was much more grown up than it had been several week earlier when Brian and I rode it after work. Then a few miles in we crossed a stream with a half-eaten salmon sitting on the small bridge's deck.
"HEY-OH."
A few miles later we passed another half-eaten salmon at yet another crossing.
I was not looking forward to riding back.
Then Bernie blew a flat.
We put in a new tube, but several miles later he blew another. This is why I always ride with two tubes and note one. We put the second one in, but worried that there might be a bur on his rim or something, we called it, about 8 miles in.
The way back was uneventful, with no more flats, though we heard a bear below one of the crossings.
Back at the car, the day still quite nice, we decided to load up, and go ride Crescent Lake. Turned out we should have just done that in the first place! 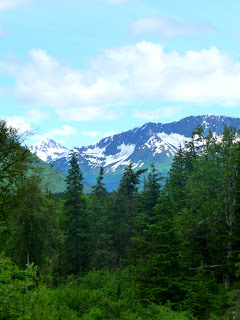 Wednesday was a pretty clow-key day, catching up on sleep, building up Andrew's cross bike, and doing the Wedneday night bangers ride with the crew just before the rain showed up, and of course, grilling up bangers and drinking beer in the Hilltop Parking lot after.
No pictures, but it was nice to show Andrew the trails that are quite literally in my back yard.

Thursday was pouring-down rain, but Andrew's cousin Ali, who lives in Fairbanks, came through town for a visit. The rain let up in the afternoon so we did a short hike from Glen Alps up to the "Football Fields" a glacial plain below O'Malley Peak, to the overlook of Black Lake and the Williwa Lakes beyond that.


On Friday we drove up to Hatcher Pass to pre-ride part of the Hatcher Pass Road Race course. The race, held the next day on Saturday, started at the Gold Cord Mine, hosted by the Trimble family, went down about 1,000 feet, before climbing nearly 1,000 feet to Hatcher Pass, and then descended to Willow, before doubling back, for about 68 miles and 6,000 feet of climbing. The heavy rains in Anchorage the day before had materilized into flurries at the pass, and snow still clung to the ridgeline at 5,000 feet on Friday and Saturday.
Andrew and just rode about 30 miles of the course on Friday, but the skies were partially clear, so we took a few pics. Race day was pretty much rain the whole time, and temps as low as 38 in the pass. I borrowed a friend cross bike for this race, and had a total blast. Who would have thought I would ever say anything like that about corss bikes? Despite the cold and wet, I stayed warm and rode steadily, place 5th of the 13 contenders and feeling very good at the finish.


Sometimes, when living so far away, it's easy to forget why friendships existed, and grow ever furthur apart. While Andrew was always one of my best buds through college, and it's only been a few years, I was glad to pick things right back up where we left off. I have plenty of good riding partners up here, but none can ever be replaced either, and I was reminded of this on Andrew's trip.
Posted by Dante at 11:12 PM