Gold Cord Peak and the Pinnacle

I’ve got some intel.
The snowpack on the backside of Microdot in Hatcher Pass is “fluffy.”
My anonymous shred-head source informed Nathan, Cody, and I of this on Sunday evening after throwing a backflip into the shaded backside of Microdot where we were skiing laps following a spectacular couple of days of skiing.
We appreciated this late-breaking information, though perhaps the 100s of awesome lines that had been skied already on the surrounding peaks could have told us this as well, if not for our own experiences.
Fluffy is one way to describe the Hatcher snowpack, but near-record breaking deep is another.

So what can we derive from all of this?
Either Hatcher is in for a banner year, a total bust, or something between.
This complex mountain range is hammered and then abandoned by even more complex weather. It can go months without significant snowfall, and has been known to get buried by large quantities of snow at any given time.
In the end, all we know for sure is what’s going on now, and that’s “fluffy.”

This season has been lackluster so far compared to the previous few, but everything changed when the skies cleared on Thanksgiving Day.

I synced up with Jack and Kruse in negative temperatures on the west ridgeline of Gold Cord Peak Friday morning.
Later we were joined by JT, Nathanael (not to be confused with Nathan), and Chris. A trail was broken up the sunny ridge line of this centerpiece summit, and frankly we all felt a bit warm.
At the top, we were greeted with sweeping views in almost all directions, and inviting lines to the west into Gold Cord Bowl.
Jack cut the run and moved a surprising amount of slough at first, but the run, which consisted of short chutes and broken bands of cliff, skied well. JT may have scored the ultimate run by venturing further up the knife edge summit ridge and taking a beautiful open slope from the top, though no one was too disappointed one way or the other.
In the cold shade of the bowl we remembered how chilly it was, and while flexing my camelbak tube to take a drink, the normally malleable plastic hose snapped like a twig making a jagged break that resembled broken glass.


A cross skinner was broken across the lower west face back to the ridge skinner, and we skied a second run through the alpenglow down the open south face to finish out the day…though the elders of the group tagged one more line in the dusk as we youngsters scurried off for beverages.

While skiing Friday, we had all noticed a skinner and a set of tracks that had been put into the west face of the Pinnacle on Thanksgiving Day.
It certainly captured the imagination, and upon discussion with Nathan, we decided to head that way Saturday morning.
I flew virtual circles around the Pinnacle on Google Earth later that night and noted that from the top of the skinner, a long, slightly curved couloir ran down the southeast corner of the pillar of granite. It appeared to go.
Aaron, Dan, Cody, Nathan, and I all headed out of Independence lot, in temps slightly warmer than the day previous, but weary of the potential for growing north winds that could reject us.
Despite it being a pretty busy day on the slopes, we were blissfully alone for almost the entire outing.
The skinner up Pinnacle was a piece of work, and I say that with genuine admiration. Aside from making it possible to achieve our objective of skiing two sides of the Pinnacle by only having to break trail once, I can safely say I could not have threaded an uptrack through the broken cliff bands as well as the Thanksgiving Day folks did.
We were grateful. Thank you.

When we crested the ridge line, we got out first look into the southeast couloir.
It was a site welcomed by couloir skiers everywhere: steep, dark blue, cold, walled in by high granite sides, and mystery around a corner.
We discussed our approach. Returning to the ridge by coming back up the couloir looked like it could be a serious wallow-fest. Were we willing to ski out to the groomed Archangel Road and slowly plod back to the road and hitch back to the car for a one run day if the ascent proved too much? What if the winds picked up while we were sheltered in the couloir? We might not feel them, but we could be in a dangerous path of overhead dangers.
We could always ski the sunny west face too. There would be no shame in that.
We decided we were willing to make the long trek out and call it a one run day if necessary to ski this couloir.
The plan was set: Nathan would make a top cut to a small fin, and if nothing let go, board to a buttress of rock near the elbow. As long as he didn’t spot any danger below, he would signal up and Cody would ski to him. Nathan would finish out the run, and Cody would signal up to the next person when Nathan was clear. Rinse and repeat for the rest of us.
Nathan dropped in.
I could not believe my eyes when nothing sloughed.
I had pushed a small bit of slough off the skinner, not to mention what we had seen the day before. This steep couloir seemed guaranteed to get snow to move.
He boarded the rest of the way down to the elbow, the snow vaporizing in each turn.
If we were all drooling, it would have been understandable.
Nathan signaled up, and Cody dropped in next, his second outing in 11 months after being knocked out by a knee injury last season.
Our drool continued, probably freezing in place at this point.

It was as good as it looked, and despite its size, it was over way too fast.
From the bottom, we decided we would make a go of it and climb back up.
Nathan, who had informed us at the car park that he was running at 20% and would be very slow today, only to lead all the way up the west face, broke trail about 2/3 of the way back up the couloir.

We had our one and only scare of the day when a couple cubic yards worth of slough came tumbling off the Pinnacle into the couloir a couple hundred feet above us.
The slough arrested upon contact, but we kept a weary eye to the sky from then on. Nothing else ever fell in after that.
Eventually, the steep kick turns became draining, and we switched to booting. Nathan and I started the charge, doing 40-step or less rotations, and soon enough, we had the whole group in the mix.
It was really funny how all of us got hero syndrome on our first two rotations, trying to put more time and steps in than we agreed on, but after two rotations, and getting to enjoy the fruits of the group’s labor in the back, everyone chilled and got into a rhythm. My alter ego as Patches O'Houlihan came out to ensure that no one tried to be a hero either, and if I had a wrench, I'm sure I would have thrown it. I’m not a big fan of booting couloirs - I like booting ridges when I have to boot - but with a good team, a good attitude, and lots of jokes, it was kind of fun.
The final 100 feet got tough: steep and deep. We adapted and did "10-step sprints," plowing upward. It worked, and we finally emerged into a golden sunlit ridge, just in time for a sunset descent. 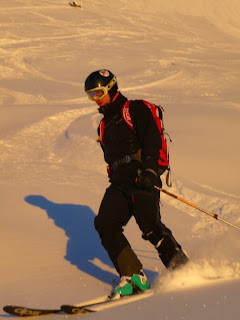 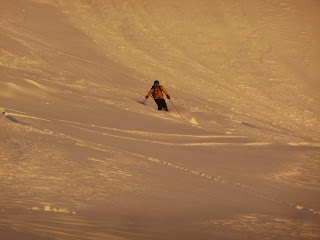 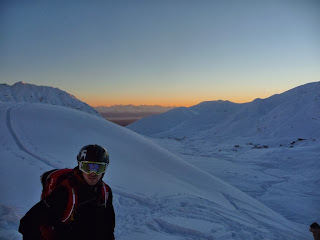 
Sunday was a day for doing laps. Cody, Nathan and I didn’t have the legs or inspiration to chase an objective, and the shady side of Microdot had plenty of untracked snow left, plus one ill-advised run down the summit chute.

If you can dodge a wrench you can boot back a couloir?

If you can dodge a wrench, you can boot-pack a couloir?