Eighteen and on a Mission to Mountain Bike in Alaska

I was 18 years old, and on a mission to mountain bike in the last frontier.
I was headed to a place called the Kenai Peninsula. I wasn’t really sure where that was, except that I had read about a bunch of bear attacks there in some book about bear attacks in Alaska. 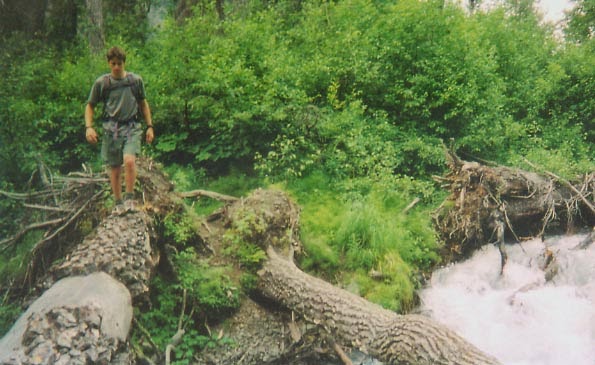 All summer I’ve been trying to figure out what I wanted to say in this post.

Coming to Alaska was a dream for that 18 year old; living here now is a fact of life to this 28 year old.
That I can recount every day, and every ride of that trip like it happened last weekend, is telling of its impact; the fact that those same mountains and trails have become the backdrop to my life is the evidence.
Over the course of a few days that summer, about 100-miles of remote trail and a group of people changed the course of the rest of my life more than any other trails I’ve ridden since then. 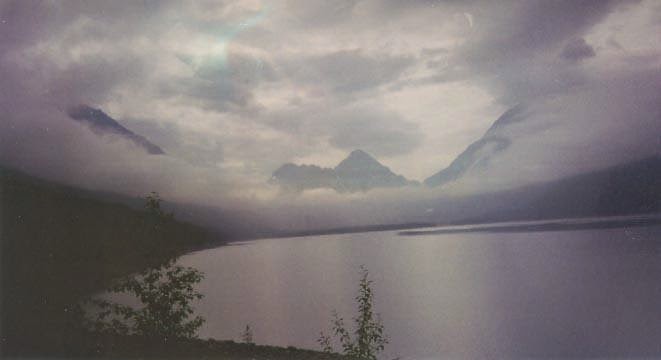 I spent the first two days in a hostel in downtown Anchorage, riding the nearby Eklutna Lake and Powerline Pass trails.
In retrospect, these seem like pretty boring rides, except that, everything I saw blew my mind: the color of Eklutna, the jagged edges of the Chugach, the soaring view from Powerline over Turnagain Arm, the hissing wind that spit small stones and made the high-voltage wires sing, eating a handful of the icy crystals from a decaying cornice in mid-July.
Perhaps what surprised me more, was how near all this apparent wilderness was to the hustle and bustle of downtown Anchorage.
I’d only been west twice in my young life. Snow-capped mountains, glaciers, and grizzly bears, among other novelties, existed only in pictures and my imagination.
I also grew up in a rural Vermont town. While I’d visited some of the metropolises of the Northeast, those visits often highlighted one fact: cities weren’t for me.
A resident of Anchorage now, I’m hesitant to sing its praises, as its shortfalls are many; but then, wandering around downtown and the Coastal Trail on those warm summer evenings, it was the first urban setting I had ever felt comfortable in.

On day 3, the tour group formed, and we packed into a van and drove south.
We set up a base camp on the shores of the Kenai River in Cooper Landing.
Crescent Lake, Russian Lakes, Seward, and Johnson Pass were on the agenda for the remainder of the week.
I had never seen country like this.
The white and green, snow-streaked Kenai Mountains felt towering.
The change in climazones as we rode fascinated me.
In the Northeast, if you drove in your car on a highway for 6 hours in any direction, you would still essentially be in the same environment. Here, I was riding my bike, and the environment seemed to change every five minutes.
I found myself near the front of our group with whomever the lead guide of the day was, and around each corner I expected to be greeted by a terrifying brown bear, ready to induct someone else into the next publication of that book I’d read.

While my fear was blatantly irrational, could you blame me?
It was a never-ending ying and yang of fear and awe with each corner and vista.

When we rode Russian Lakes as a point-to-point, we rode for over four hours – the pace was generally leisurely to account for the range of abilities in our group – even so, it was clear that we were covering some ground on this ride. There was nothing that even remotely hinted at civilization between our start and finish.
Along the way, we passed cold-water lakes fed by glacier-capped peaks beyond. I saw my first Alaskan salmon. Holding in the crystal clear waters of the Russian River where the trail runs alongside, kings so big, I stared at them for at least several seconds while our guide Paul pointed at them, thinking I was looking at three oblong stones.

It was more than just those couple of days though.

As I’d grown up, I’d dabbled with different kinds of riding, but in the end, all I ever really wanted to do was ride, and ride all day. I cobbled together link-ups of networks of unmapped logging roads, ATV trails, vigilante single track, and quiet dirt roads in the heart of the Green Mountains. These maze-like loops were fun, but in the end, it was rare I ever drifted more than a dozen miles in a straight line from where I started.
I yearned for more, and here, I was finding it. 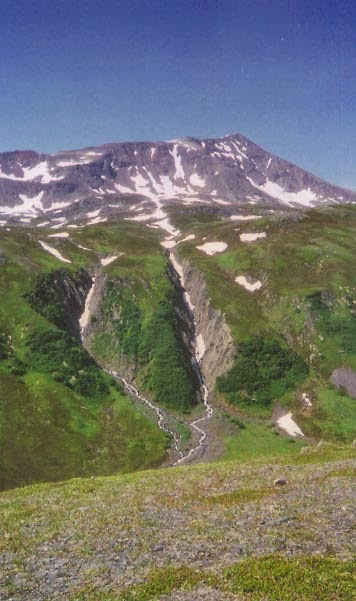 All summer I’d been preparing for this.
I don’t know what exactly triggered it, but in the weeks leading up to the trip, I started doing something I’d never done on a bike before: training.
I’d been mountain biking for 5 or 6 years at this point, I rode a good bit, and every now and then I went off on some mis-guided epic that often ended with a pay phone call to home asking a distressed mother for a ride home from who-knows-where; but I was still a kid, and I rode on a whim and in spurts.
In retrospect, calling what I did in advance of my trip north “training” is a pretty loose use of the word, but for once, I was consistently doing short-distance, mid-distance, and long-distance circuits every night and weekend.
I had spoken with tour operator Tony at some point in the spring, and he definitely stressed that we would be doing fairly long, remote rides, and it would help to be in shape.
I’d done enough group rides where I was hanging off the back sucking wind to know without a doubt, that was not how I wanted to spend the week.
I wanted the most out of my trip, and I knew that I would have to work a bit to get there.
The consistency or hitting the same loops, noticing that I was riding them smoother and faster as the weeks went by, and the positive feedback loop that was built off of it, was something I liked, and I guess I never really stopped afterward.

A secondary off shoot of this was diet. Though it was chance, on the flight up, I was flipping through a mountain bike magazine, and I stopped on an article about fueling and nutrition.
These diet articles in cycling magazines are a dime a dozen it seems, but this was 2004, and the low-carb, whole grain craze was kicking into overdrive.
I’m fortunate for many reasons, and one for sure is to have had a mom who was a brilliant cook and a savvy shopper. We ate well: lots of fresh local vegetables, lean proteins, balanced with healthy servings of carbs.
Up to this point, I’d never really thought much about eating; what was there to think? Mom cooked dinner, and I was a skinny little Italian kid who couldn’t seem to gain weight if I tried.
With the increased load in riding, I’d begun to see the effect that fuel choice had on how I felt on my rides. Some of the lessons I learned were obvious: you can’t do an 8-hour ride fueled by a single snickers bar. Others were more complex, as I saw how the effects of a late night out with friends or pigging out on junk food translated to a rougher, less enjoyable ride.
I was just a few months away from leaving behind mom’s home cooking, and would soon enough have to decide what was for dinner on my own. Grasping some of these concepts was likely pivotal, and though I’m sure this article said nothing that isn’t obvious to most athletes about the importance of diet, at the time, it clicked. 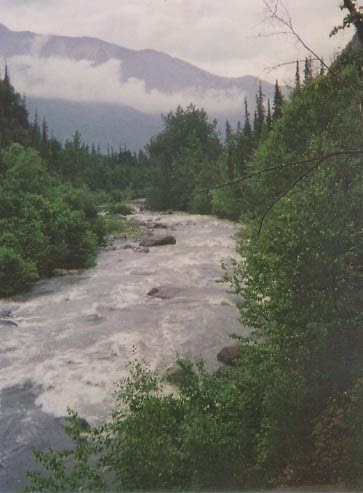 Day 5 was the day it all happened though.

A planned rest day, the other clients headed off to give their legs a break by taking a scenic cruise or kayaking in Resurrection Bay.
Guides Jen and Paul were eager to ride a trail they’d been talking about under their breath all week called Lost Lake. They didn’t have a permit to guide on this trail, and made it clear we were just going out for a self-paced group ride, but they invited me along.
All week, I’d been riding in this awesome land with people from all across the country in every stage of life: a soon-to-retire doctor and his son – fresh out of med school – both from southern California; a newly-wed couple from the mid-west on their honeymoon; a middle-aged lawyer couple from the east coast with children about my age. Then of course, there was Tony, Paul, and Jen. Their passion for riding and for living the Alaskan life came out in everything they did, whether it was talking about climbing distant peaks in the valleys we rode through, using their mountain bikes to transport moose out of the bush, or surviving the cold dark winters.
I learned a lot from each of these people, and all these people had one thing in common: they loved mountain biking. That common bond was the foundation of a camaraderie that can sometimes only be forged on a trail, and yet can still be as warm as the glow of the evening campfire where we shared life stories each night.

When we hit the plateau above Lost Lake, reveling in the hot July sun and splendor of the blooming alpine flora, my mind was set: I could see the beginning of my adult life as clear as we could see into the glistening Resurrection Bay.
Posted by Dante at 9:59 PM