Ok, I don't know about that, talk to me during finals week I suppose, but for now, you couldn't pay me to leave.

Here are two reasons why- 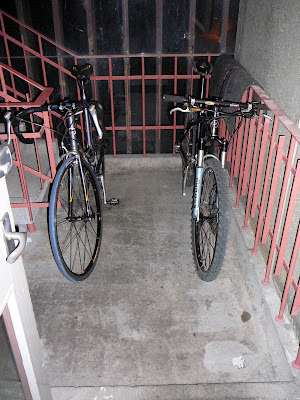 
I can't even begin to tell you how complete my life feels now. Everything seems to be "snapping together" for lack of a better term. I can cruise around the city and well beyond as I please. On Friday I made my debut on the New Zealand single track, catching a ride with the bike club to one of the trail heads. They were all doing shuttle runs, so, though they were a pretty cool group of dude, I high tailed it to earn the rest of my turns. The riding is just wide open on the ridges of the porthills overlooking the city and sea. I hammered for three hours, or until dark, dropping down to the turquoise shores of Governors bay in Lyttelton for a bite to eat at Coffee Culture. My ride back lead me right through downtown, though I'd already cruised through earlier to get some essential bike parts, (locks and lights are a must in this city) what a contrast coming from the windy ridges where I saw only a few other riders and, ya imagine, a bunch of sheep, to the hustle and bustle of chch on a Friday night. That's something I just can't get in good ole Middlebury or Saratoga.

So today I took the road hound out for a 5 1/2 hour, 60-70 mile (or should I say 120-140k, that sounds a little more badass ehh?) hammer fest over three gaps, cruising to the end of the road beach town of Purau (poo-row-ah) before doubling back and coming around the length of governor's bay to Lyttelton, stopping back in at Coffee Culture for another awesome berry Friand, which I definitely needed to make the 30 minute climb, I'm serious, all climbing, maybe one or two 10-20 meter tops, flat's, no dips though, before finally beginning my decent back down into the city. It was a beautiful, but pretty grueling ride, being my first in three weeks now! The asphalt is a good deal tougher here as well. They call paved roads sealed, and I'll tell you why. In America, our roads are nice and smooth (this does not include the states of Vermont, Maine, Alaska, or Idaho), kind of like say, like a butter cookie. Here the texture is more similar to a rice crispies treat, like someone just poured a layer of transparent coating on top and made the gravel stick together. It would probably be a lot better if they just started doing that however, since falling on gravel tends to facilitate trips to the ER and pulling your pants down for the nice folks at the school's health services office just to get some gauze, ahem, and rice crispie treat roads would make life a lot easier when bikers get so excited for a ride they leave without any food, hahah, lot of space to fill when you ride all day.

Sorry, no photos from either ride, though I've adapted to the different riding patterns almost instantly, (I did whip out into an oncoming lane when I took the mtb for its first roll Thursday night, no cars though or I wouldn't be telling you this) I haven't felt like taking anything more than I need to risk; pics in the future I promise. You can try and see my route from today, though doubt this link will work, http://www.routeslip.com/routes/24476-

umm, did I say the riding is fantastic here? These guys know it- 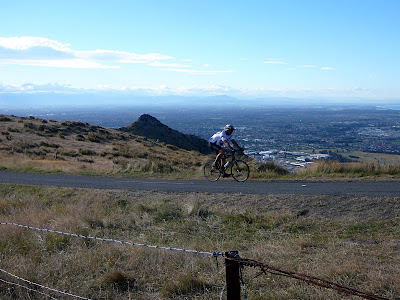 Just above the Rapaki track 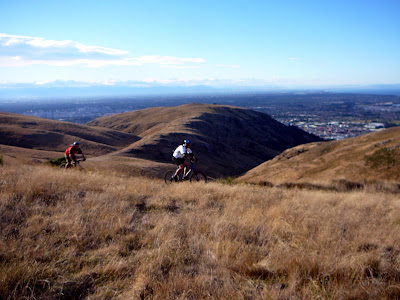 Still waiting for my bikes, I went for a hike Tuesday. I saw a ton of riders, both road and mountain, each one was puuuuuure torture 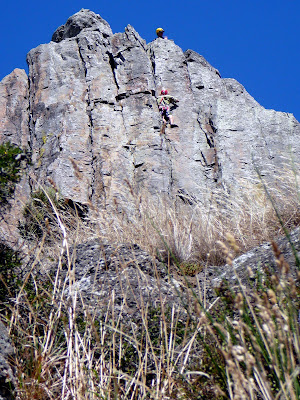 Can you see the climber? 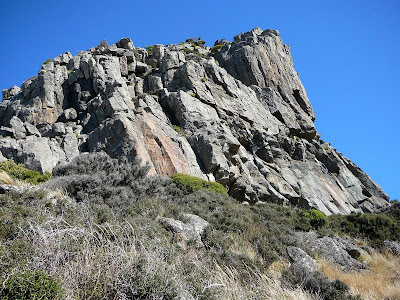 How about now? (click to enlarge and look in the top right) itsabigrock, Castle Rock (not Castle Hill in Arthurs Pass) is a local hotspot 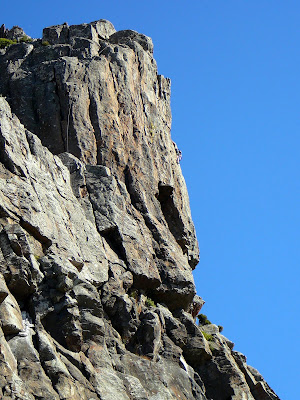 Cheaters, the easy way up Mt Cavendish on the Gondola, so wierd to see one of these again with no snow under it- 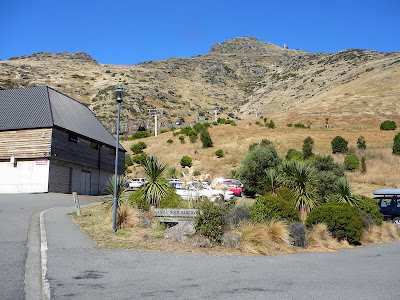 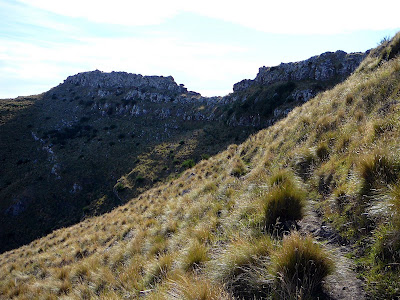 How about that plane ticket ehh? What an awesome place to have a little trail dinner. Below is Cass Bay, see the boats moored in it, one day, I'll haveone there. 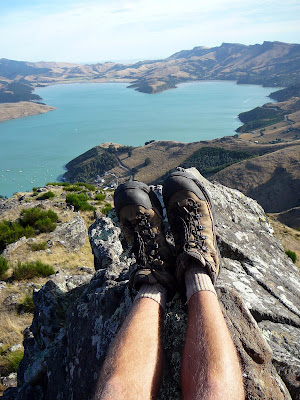 "...
Maybe one day I’ll live on a boat
Moored in the turquoise blue below

The Chch end of the Lyttelton Tunnel, a mile long link to the major port where I watched, and then funnily enough paced with, a giant British cruise boat deporting on Friday. I had to stop and laugh with a local, gathered with hundreds of others along the road to Evans Pass watching the thing go. At first it hardly moved, but once it cleared the pier it really began to move and stayed just over my shoulder no matter how hard I tried to drop it, damn paceline moochers- 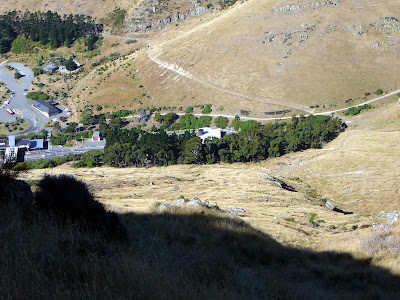 How's this for perspective? 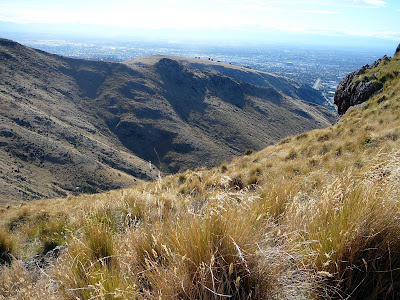 Castle Rock from behind 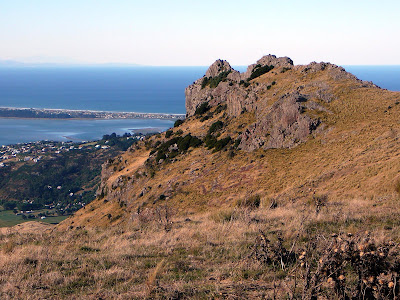 I think this is one of the best shots I've managed to get of Chch so far. From afar my camera does a pretty lousy job and always seems to add a white haze to the image, but not so much here. The Southern Alps in the distance seem a lot close, but in reality, they're just big mountans really pretty far away. 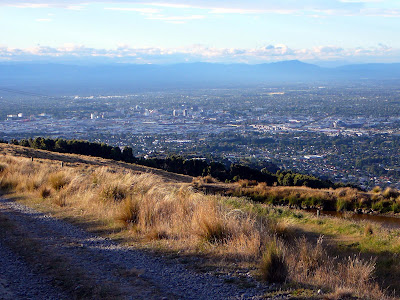 Do I need a title? I like these rocks 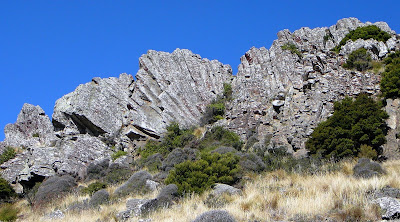 Beefy, New Zealand steak just isn't quite as nice as our fat flat midwestern bovine, the lamb however, is another story- 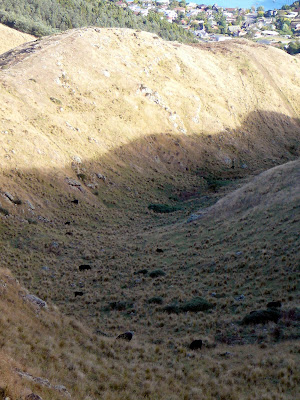 P.S. if you're having trouble seeing a photo click it to enlarge
Posted by Dante at 11:59 PM