As the title would suggest, this post is stuff from my week off. Last week we were pretty much empty, and not wanting to have to polish rocks in the driveway, I took a cut and went fishing and riding everyday. Tough life eh?

Warm dry weather has helped fuel a 13,000 + acre wildfire about 20 miles south of Sterling (map). Officials are letting the area burn to reduce fuel accumulation.
Smoke has been drifting north when the wind sends it this way and last week the mountains were hazy and smoky, so this week's photos look more like they were taken in the vicinity of LA.
On Wednesday night, sitting around with Adam's dad Tom, who'd just finshed his motorcycle trip from Iowa to Sterling, an ugly yellow cloud blew in and even though it'd been in the high 70's all day, dirty snow started falling. The snow was of course ash, which coated everything and made the place smell like a campground. 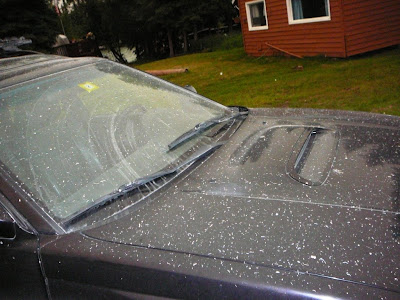 On Thursday Mike from the Clarion, his two pups Natty and Chloe, and I went for a hike up Summit Creek. 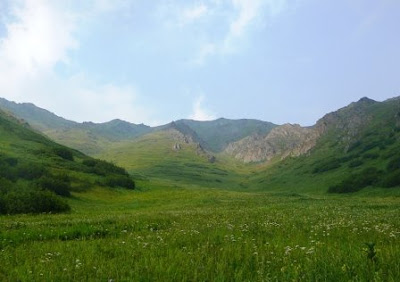 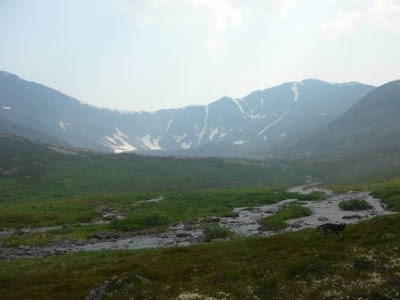 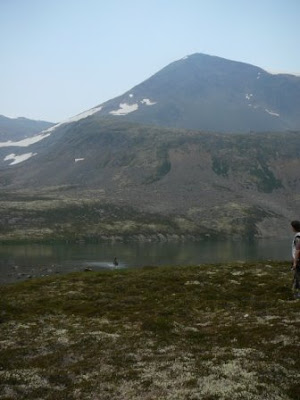 Chloe tears into the main tarn. 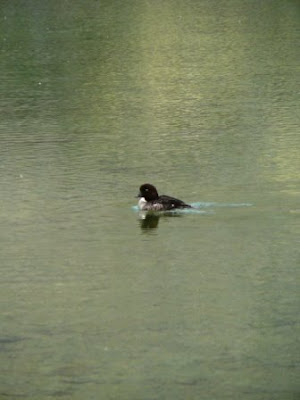 A pair of buffalo head ducks lives in the main tarn. 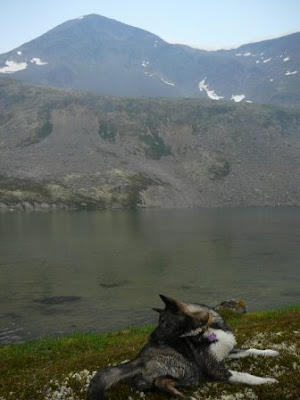 Once Chloe realized how cold the water was she decided to stay on the tundra. There was also the duck,which, after being chased, became surprisingly bold. 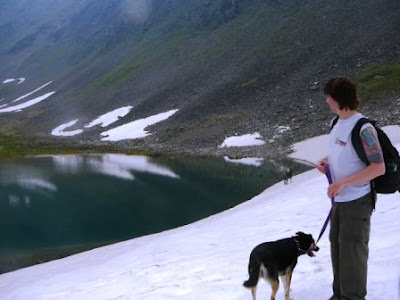 The highest of the series of tarns still has a snowy beach. 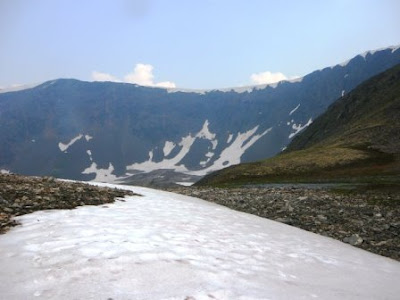 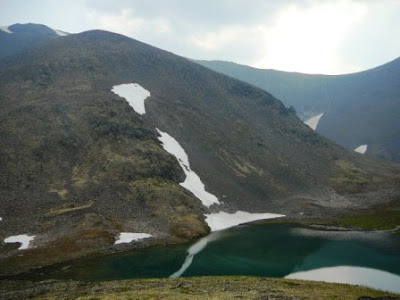 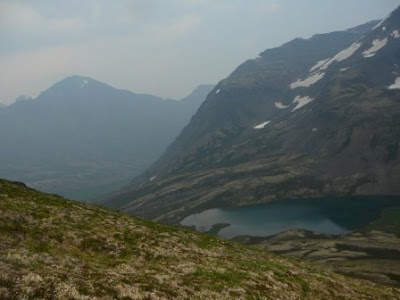 The main tarn from a ridge above the highest. 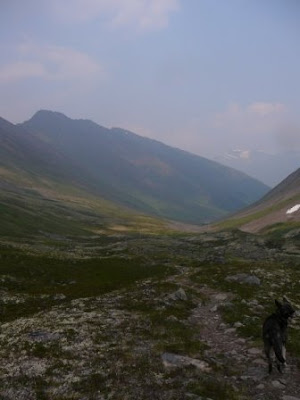 Looking back down the valley toward Summit Pass. 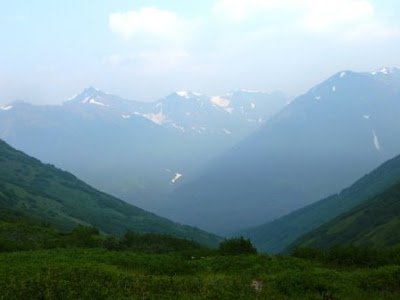 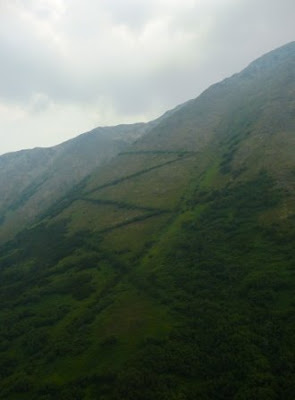 Odd growth pattern on the south side of Summit Creek Valley, the Alaska version of crop circles, or an old mining trail? 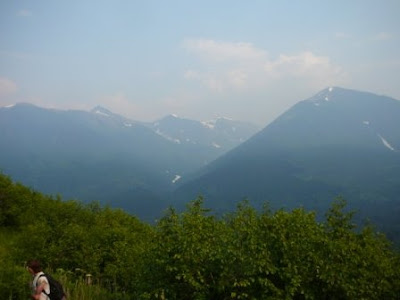 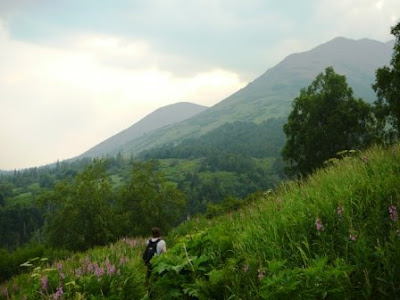 On Friday Angelo, Adam, Al and I went on Adam's guide boat out in Kachemak Bay for halibut. These three pictures were shot as we went around the Homer Spit, still in the lee of the much angrier ocean. We didn't stay out too long as three to four foot waves grew to six to seven feet, with a few eight or nine footers in just for good measure.
In Adam's 20 foot Willie Predator, we were getting tossed around pretty good. The day's catch by the way: I somehow found one little munchkin of a chicken, that was promptly gaffed and bonked. The trip ranked high in adventure points anyway. 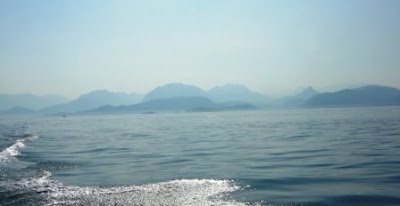 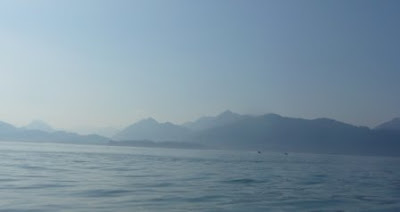 Saturday I was content to play in mountains made of stone, not water, and headed for one of my all time favorite trails, Lost Lake, outside Seward. The ride started with low cloud cover, but mid-ride things blew off opening up the spectacular scenery that surrounds that area. 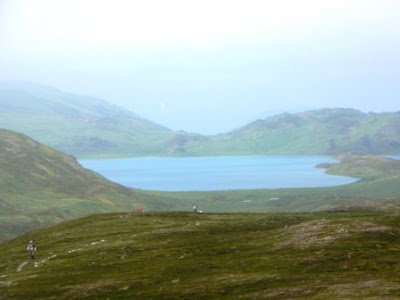 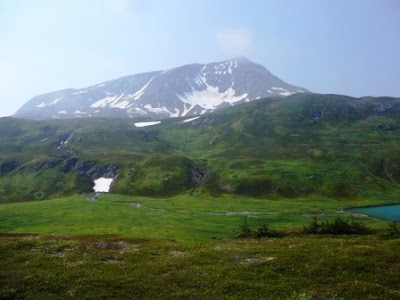 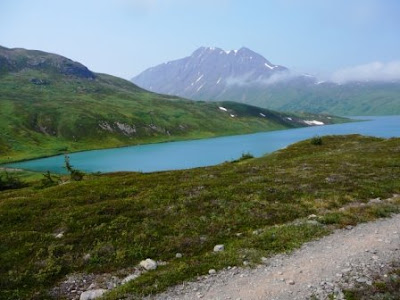 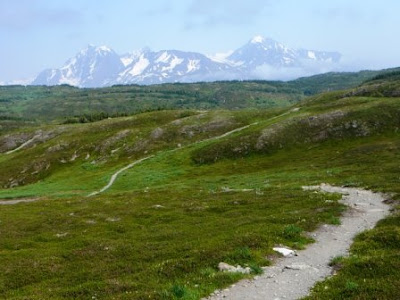 Just try and hang onto my handebars for a minute: You're flowing through open tundra on a bright white single track trail. Powering over a steep short climb, you drop back in the saddle, feel the suspension adjust under you, look up and breath in to see the next mile of trail unfolding before you, while 100 miles of glaciers and rock tower in the distance. That's Lost Lake. 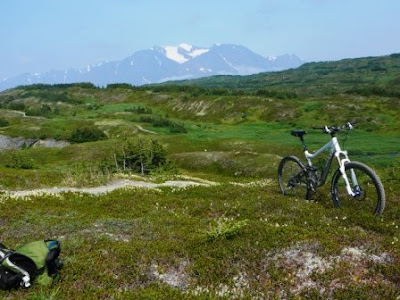 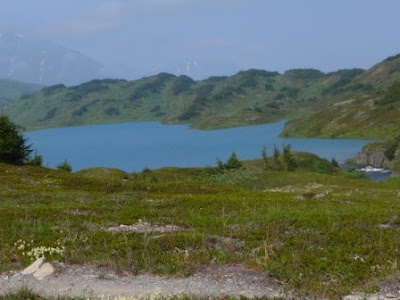 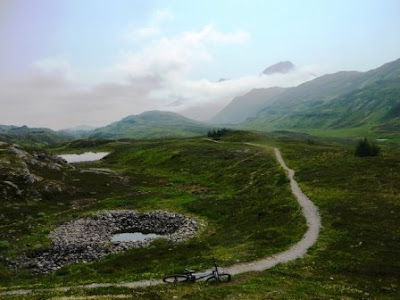 One of my all time favorite Lost Lake views. The peak to the right almost always seems to be partially veiled. 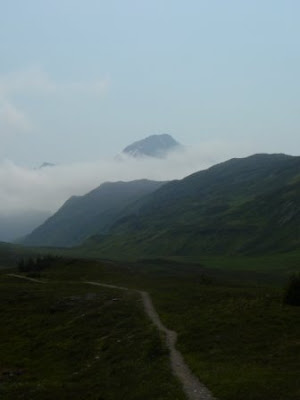 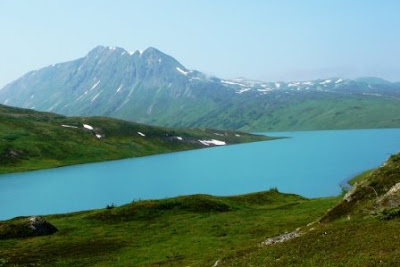 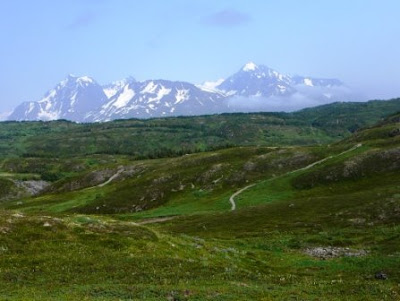 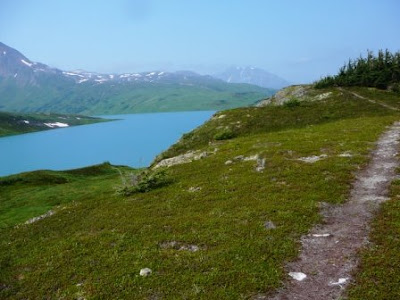 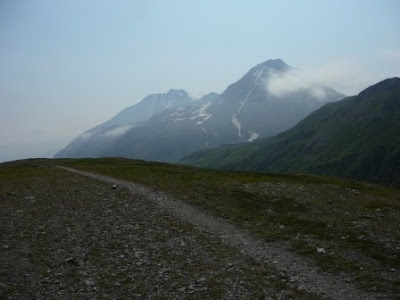 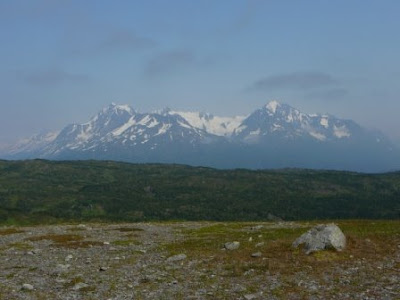