I know my Lower 48 readers aren't going to believe this when I say, that summer is on the way out up here.
First, my apologies for disappearing for the past few weeks. This is what I do in the month of August, and maybe I should have said that at some time, oops.
Here's the wrap up. King season closed July 31 at 11:59 p.m. and, the hardest week of the season began.
The first two weeks of August are chuck full of red fishing and this year, the silvers were in too.
That meant ceaseless fish cleaning and processing for me. Those are the days where often I don't drift off to bed until well past mid-night, only to awake a few hours later to do it all again. During it all I still managed to get out plenty and kill some fish for the winter.
There were some evenings and weekends silver fishing this August that even when the fish weren't biting, were just spectacular.
One night, early in the month, I finished up around 12:30, and just collapsed on the deck next to the river listening to sockeye roll out front while a full moon beamed on the water. 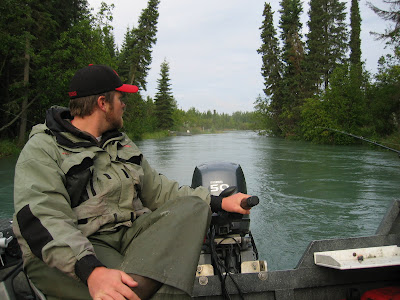 Ryan backtrolls for silvers in highwater. Photo courtesy of R.S.

By August 10 my right wrist was ready to fall off and I'd seen just about all the fish I wanted to see for one season.
Just in the nick of time my friend Rachel swooped in from New Jersey for a visit. 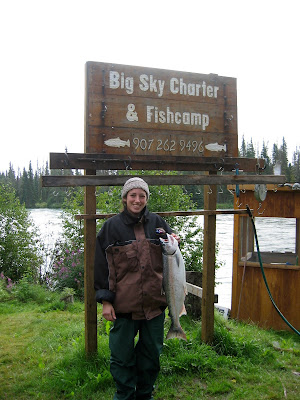 Rach with her first ever fish, a Kenai River Silver.

We spent the next week and a half running around the trails and backcountry of Southcentral. We explored some places I've been wanting to check out, did a little fishing, even a little hunting, and just relaxed. I didn't check my email other than to do my weekly video and left my phone off as much as I could.
I'll have more on Rach's visit on Thursday, there's just too many photos to go through right now.
She went back on Friday, and I came back to camp with the intent of settling down to move from my summer residence in the trailer back into the main lodge.
That plan lasted an hour, then Joe, Adam, Adam's two boys and I hopped in the boat and spent the rest of the afternoon silver fishing.
Sunday was my first day back at the Clarion full time. I literally put it off as long as possible, waking up early and going back out for silvers, "fishing for lead art."
Anyway, I eventually did have to go back into the office. Fortunately my Sunday through Thursday schedule means I start my week slow, and typically end it with a bang.
Today was slow, though felt weird nonetheless.
The dynamics of an office environment to that of a fish camp aren't really comparable, and yet, for another week or two, I'll know them both.
In the office, my relationship with my coworkers is friendly and casual. At camp, it's more of a family environment. Though we all have our own responsibilities and work independently of each other, we still eat dinner together at the end of the day and play together at the end of the week.
It's a pretty unique way to live, and it's an experience not afforded by many jobs. While I wouldn't be thrilled to clean three boat limits of fish tomorrow morning, with most the camp cleared out now, it sure is lonely, and I already miss the summer. 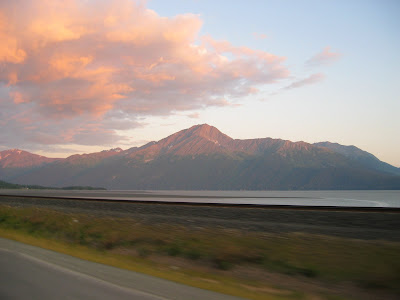 Kenai Mountains seen from the north side of Turnagain Arm. Photo courtesy of R.S.
Posted by Dante at 9:06 PM