Low visibility, heavy snow and gusting winds brought me back to the northerly slope that falls into Tenderfoot Creek off of tri tip, AKA "the bad place," on Friday.
Jack and I got a leisurely start around 11, and found liquid propitiation falling just below 900.' We forgot to bring gravy for the mashed potato snow at the highway up to just past 2,000' so we headed as high as we dared where 40 mph winds buffeted us.
It was definitely a "put some hair on your chest" kind of day. Visibility was the dominant factor. On the first run we could barely see the treeline below us and had no tracks to offer depth perception as the wind had already blown out our skin track.
We almost bagged it after the first run, but the snow was promising in the trees so we decided to go back and give it a second shot.
Well wouldn't you know it, the winds kicked up and the clouds started to blow off. We got back down to the creek and examined the ravine crossing to get to the mellow westerly face of Tenderfoot ridge and decided a tri tip to tenderfoot tour would have to happen another day.
We had some nice goods where we were in the trees even if the bowl run wasn't the best and the sky seemed to be lifting even if the winds weren't laying down.
Of course, by the time we got back up to the top, visibility had gone from fair to zero and the snow was falling in earnest. We couldn't even see the treeline from the top on the run, but thank gosh at least had remnant tracks from the previous descents.
After that the clouds really did lift and the snow let up. We put in two more runs, skiing until 7 p.m.
In the mean time we got to fully explore that particular aspect of tri tip as well examined where best to make a crossing of Tenderfoot creek if the need ever arose.
The clingy and blowing snow meant we broke trail all day so we were thoroughly exhausted. 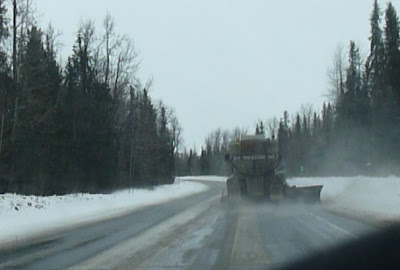 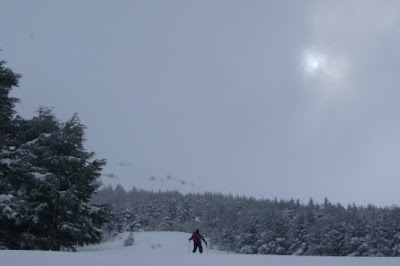 What the hell is that bright thing? 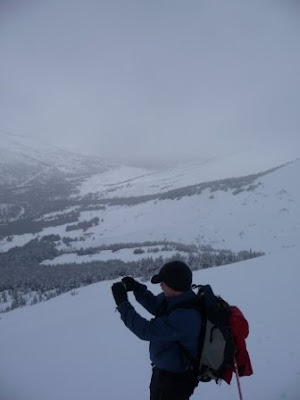 Not much of a view. 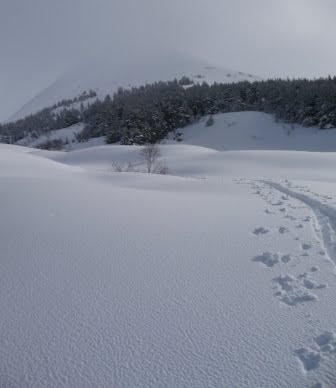 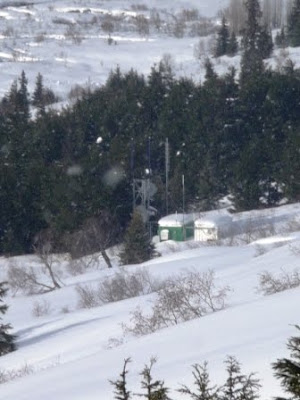 The summit weather station I think? 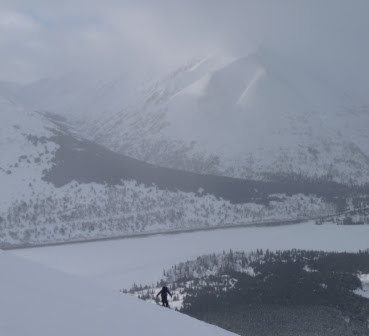 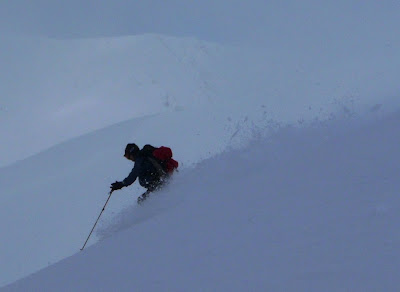 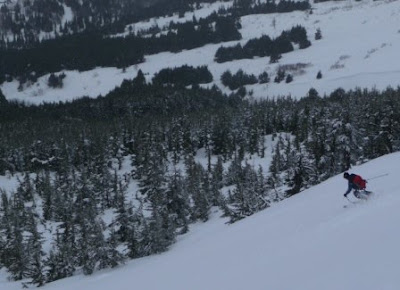 Clear skies and cool temps stuck around Friday night over the pass and sucked up the moisture from the snow, letting it set up nice and tight. Feeling a little tired and running solo, I decided to go ski the mellow tenderfoot ridge west face, expecting that with blue bird conditions, I probably wouldn't be alone. 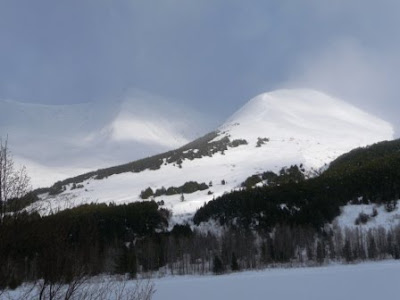 The west face of tenderfoot ridge.
Not to my surprise, when I pulled into the lot, a group of cen-pen skiers known as the tele-babes, + 1, pulled in behind me.
They too had seen the clear blue sky and also Jack's blog post on our adventure at tri tip the day before and decided to crank in some turns there.
Back to tri tip I went, in good company. 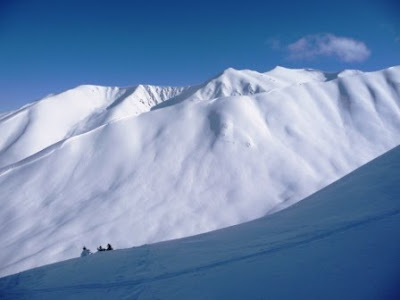 The south face of tenderfoot ridge, so many lines, so many perils. 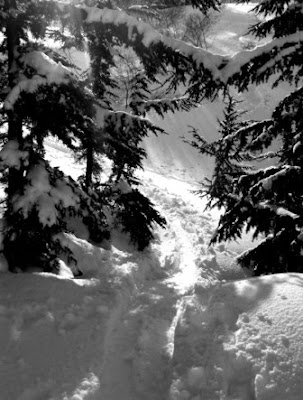 Jack set a beautiful meandering skin track from the bench above Tenderfoot Creek on Friday. This was one of my favorite views along the way. 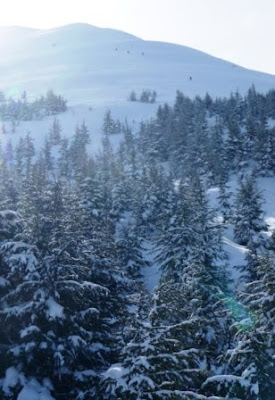 The little black dots are the tele-babes making their way up to the top of the run. 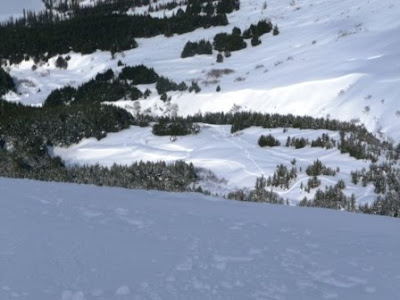 A view of the bench above the creek from the top of the run. 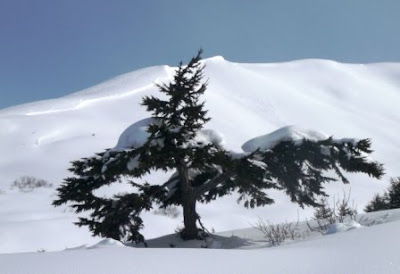 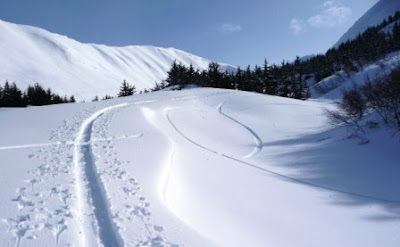 A natural half pipe on the bench made for some fun and artsy lines. Riddle me this: Where did the mysterious track that runs perpendicular to the up track come from? 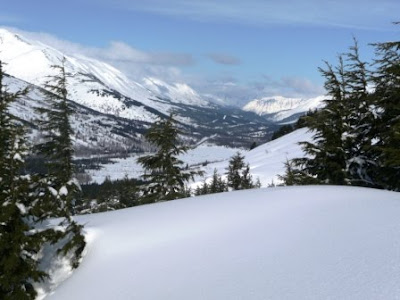 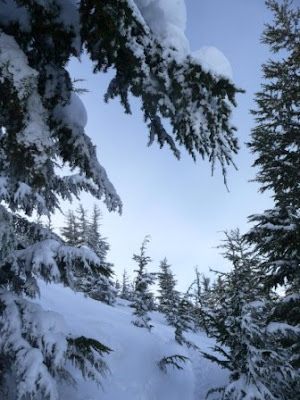 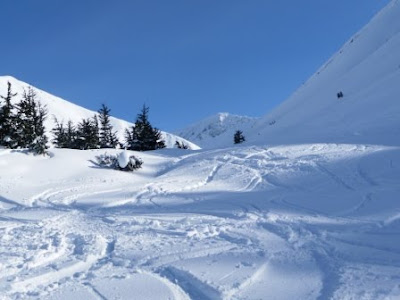 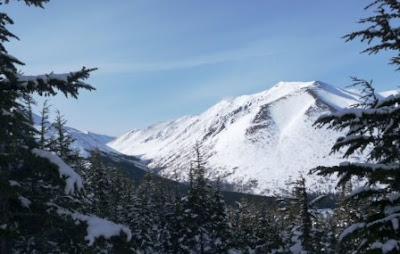 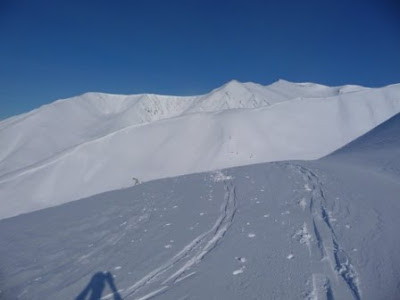 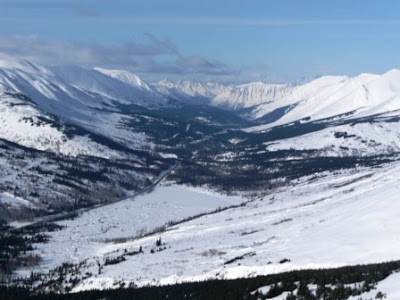 I ended up putting in 5 runs again in much less time then the day before thanks to far less hassle from the weather. I pointed my board downhill for the last time at 5 with hours of daylight left.
While for the most part I skied on my own, the tele-babes made a move to the east, skiing the next aspect of tri tip over and uncovering an excellent stash of powder Jack and I missed the day prior. I greedily carved a two lines out of their fine discovery.
I also enjoyed a cool tasty beverage compliments of the tele-babes back at the lot which was nice as I had not thought to bring one of my own, so, for any tele-babes reading this post: Thanks!
Is it next weekend yet?
Posted by Dante at 11:36 PM