Another year, another Tour of Anchorage skied. I can't believe it's come and gone already, this winter is ripping.
I upped the anti this year and did the 50 k not 40 k like last year.
I finished the 50k race in a time of 3:13:55.2 to be precise, 143rd 0f 237 overall. In my age group (18-24) I was 21st of 27. The winner of my group skied in at 2:19:23.5, the winner overall 2:11:22.7.
Obviously in a race that has 1,700 participants (for all distances obviously) and attracts more than a fair share of elites, you're not skiing for placement.
I was shooting for a time of 3 hours to 3 hours and 10 minutes. I missed my mark by 3 minutes and I've only got one guy to blame for that.
Overall this is what I should have expected based on points I made following the Tsalteshi race. While my technique and overall strength is way up this year compared to last, I've done virtually no long skis comparatively. Last weekend I did my longest ski of the season, a 45 k in Tsalteshi at 3:10. Last year I'd put in a few skis over 3 hours. (Not to side track but one could think that a 48k in 310 one weekend and a 50k in about the same the following weekend is a bump, it's actually not, the terrain in Tsalteshi is grueling.)
I really needed to have better pacing going on and to have kept my foot on the accelerator through a few sections and I probably could have shaved an easy 5 minutes off.
I came into the finish feeling pretty chipper and definitely had juice left in the batteries, not much, but enough for sure.
To get better pacing means putting in more long skis, that simple.
The tour is not a particularly grueling race if the conditions are good, as they were this year. We had fairly cold packed powder and clear blue skies. The only two pissers was warm snow in the sun and a constant wind that could in places put the burn on the legs. I guess a half of a third point was that some of the climbs later in the race were a little chewed up and soft, but that's almost always the case anyway.
As I was saying though, it's not really a super hard race. The 50k event starts with a long climb that definitely wears you down a bit, but it's never that steep and it's stepped so you get plenty of breathers as you go. After that it's pretty much all gradual downhill for 45 k as you descend to sea level.
The problem is, it's really easy to get out by yourself, drift off the pace and just start enjoying the ski a little too much.
That happened a few times today. The other issue is of course knowing how much is left in the tank for the final 5k ish climb up to Kincaid Stadium. Lots of people blow themselves up and end up pretty much crawling to the line. I wasn't worried about joining that crowd but I didn't want to push it either. The climb is pretty wimpy in comparison to Tsalteshi, but because it's at the end of a long race, the margins for error are slim.
So, all suffice to say, that when I got into the finish, I was certainly pretty worn out from the climb, but within 5 minutes, I realized that I still had a lot of energy and could have pushed a bit more at certain points during the race, taken 2k easy on the approach right before the final climb, and would have been no worse for the wear.
Alas, Keith beat me by about 5 minutes, and the tides have turned, so I guess as they say, next year.
Some high points, since I seemed to have dwelt heavily on the low, was as said, great weather, good company for pre- and post-race activities, generally pretty fast snow, my split times for the first and second half of the race were exactly identical (1:36 and 1:37, showing consistent pacing overall) and most importantly, my technique is so phenomenally better than it was last year it's stupid. I caught myself laughing a few times when I would see someone that looked probably a lot like I did last year. The thing is of course, I still have a long way to go yet.

Next weekend I'll be heading to Homer for the Kachemak Nordic Marathon. I won't up the anti on distance there though I don't think, 25k on their hilly technical course is more than enough for me. 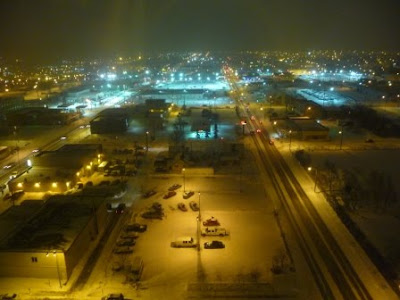 A view of downtown Anchorage from our room on the 15th floor of the Sheraton. 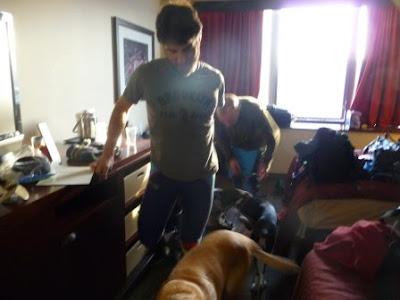 Stretching out in the hotel Sunday morning. 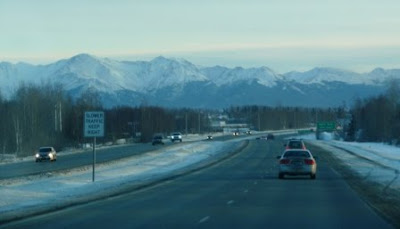 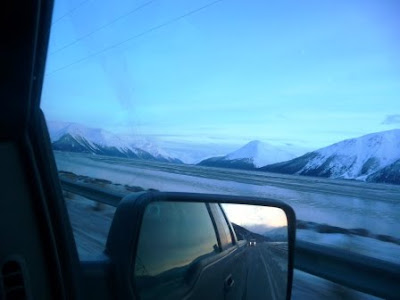 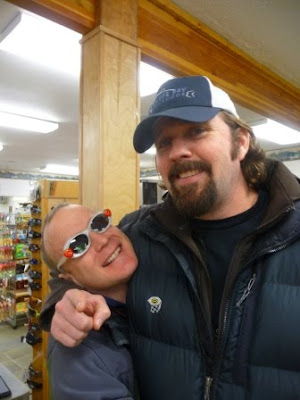 Keith (left) may have beat me, but he doesn't have a blog to post embarrassing pictures on. The shades really work for him though I think...
Posted by Dante at 9:43 PM

Dante, they call it TOUR of Anchorage for a reason. It's ok to drift off pace and enjoy the ski. My buddy, Kruser (who usually skis the TOUR, but skipped 2010) eloquently states the touring axiom: "It doesn't have to hurt."

Glad you had a good ski in Anchortown, enjoy Homer.

Jack, you're right, and I'd much rthe drift off because I was enjoying the day than because of delerium.

Bernie, I wondered if you'd notice that shirt.