It sure feels like it's been a while, but the Kenai Gods were smiling upon the mountains this weekend.
Blue bird skies and plentiful sun and north-facing powder runs were to be had in both Turnagain and Summit passes.

I met up with the Anchorage crew on Saturday morning. Initially we thought about making a trip back to Pastoral Peak (LINK) , but with not a single spot left in the Taylor Creek lot, the typical access to both Sunburst and Pastoral, we realized other probably came to the same conclusion. Sarah had skied Corn Biscut the week before and reported great conditions so we drove a little farther down the road and found the Corn Biscut lot was empty. Score. 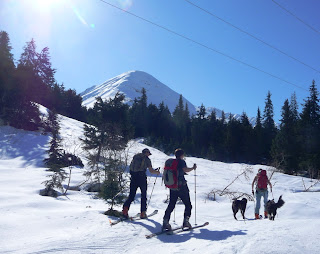 Heading across the powerline clearing. Lips is in the background. 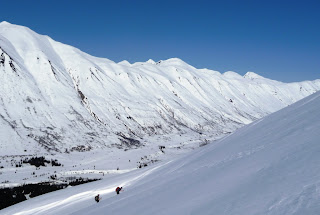 Down low the snow was baked rock hard and some skate skiers have been getting after it at highway elevation, however, higher up, the crust is still punchy. 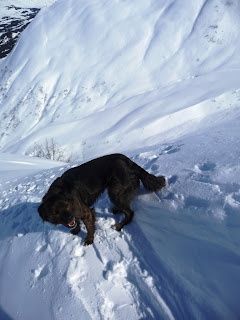 Pancake eyes the goods on the north side of the ridge. 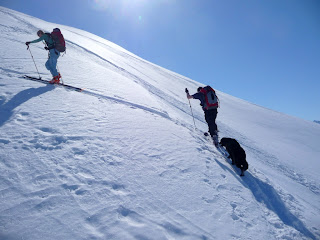 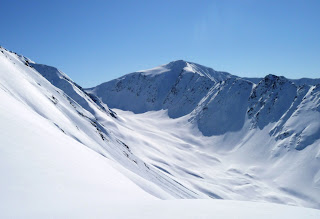 Grand Daddy and the Grand Daddy Couloir beckoned, but were not for the day. 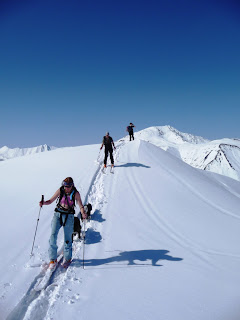 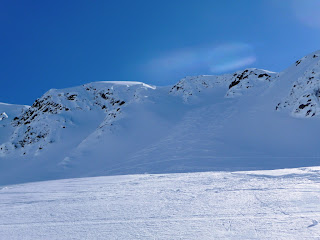 We stuck to the north side of Corn Biscut, putting in three powder laps. One other part of three showed up but never went higher than our lowest point, and stayed on the west face harvesting corn. When we left around 5 the harvest was perfect, not too crispy but not over ripe or bottomless either. 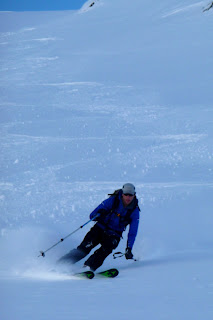 Josh lays into it.
Saturday was a major kick in the tail for my whole body. Just as last winter made me strong in the backcountry but feeling short on the skate skis, the opposite has been true of this one.
Nonetheless, Jack and I met up Sunday morning and headed south.
We drove through Turnagain and looked at Corn Biscut, but so did everyone else I think. We put in some spectacular lines there on Saturday no doubt and people saw them. I was thinking maybe jack and I could go back and snake out a few more Sunday, but with six cars in the lot at 1130-ish, we kept driving.
We decided on Tenderfoot Ridge, recalling the epic day we had back there last April (LINK). 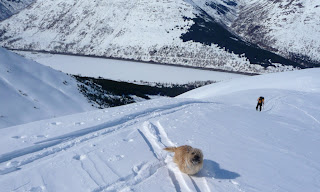 Down at the small parking area this little puff ball came running over from Summit Lodge or one of the private cabins nearby. He, or she, seemed playful and friendly, and decided it was coming along.
The damn thing ended up following us all the way to 4,000' when we reached what I refer to as Tenderfoot's lower summit. I don't think that's what it had in mind when it took off with us.
It really didn't expect to see us drop over the north side into one of the dozen or so couloirs that go down into Butcher Creek either. The light little dog had no trouble staying afloat on the sun-crusted west face of Tenderfoot, but on the powedery north would have been wallowing. After some indecision, the little puff ball scampered back down the ridgeline to home where it apparently pestered another skier.
What an adventure that thing got! 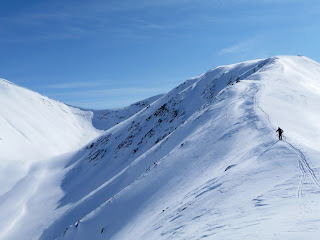 Jack approached the Tenderfoot's Lower Summit. Three skiers had gone up the ridge the day before and tracked out a couloir just on the other side of the minor flat knob Jack is approaching. We dropped into the couloir Jack appears to be looking down in this shot. The slightly skinnier one just past that actually wishbones into the one we skied, but is a bit steeper and a lot tighter on the entrance. We saw later that the one the three guys had skied the day before was rather discontinuous, and ultimately we picked the best of the few in this are of the ridge.
When Jared and I trekked up Butcher Creek last year (the valley to the left) I specifically remember that of all the couloirs and gullies that fall off this ridge, everyone but one goes, though some are thin, some are discontinuous, etc. That one that didn't go though, cliffed out, and where it was I could not recall. Based on our ski back out and what I can remember, it was farther up the ridge mixed in with a set of gullies that come right off the Lower Summit, most of which aren't very attractive in the first place. 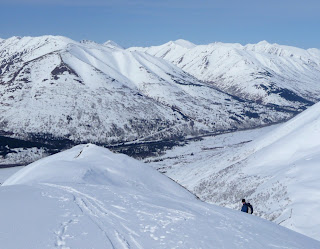 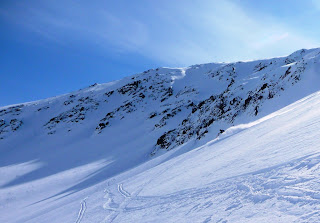 Headed down our couloir, the snow was hollow sounding, with about 4-6 inches of stale powder on top of a 4-5 inch layer of very breakable crust on top of 18 inches of bottomless sugar, on top of the bullet proof layer. We got out of there fast. No collapses, but it felt ready to go and I didn't like it at all. 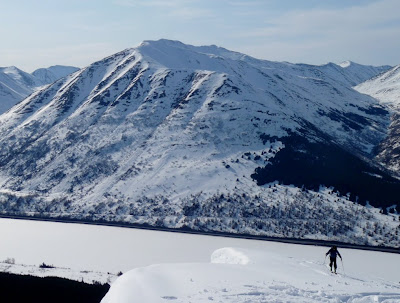 We headed back down the valley and put in an uptrack on what I refer to as Tenderfoot's Lower North Face, the partially treed broad northwest-oriented slope of the ridge that drops down to a table above Butcher Creek. It's a great run with a little less exposure and a longer line than the Bad Place over on Tri Tip next door, which, for what it's worth just looked ready to rip and take anything in its path with it. 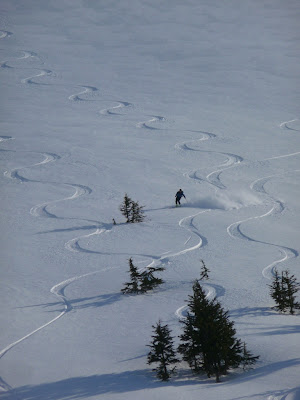 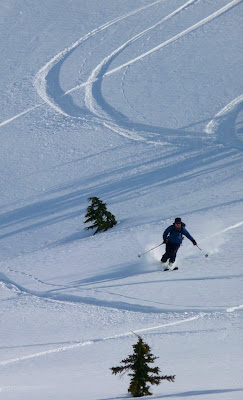 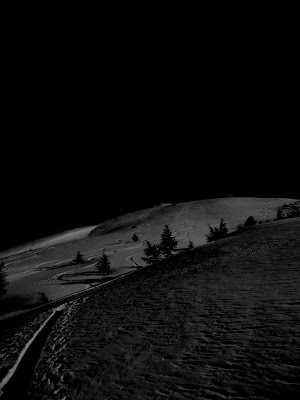 Making lines on the mountain pop. 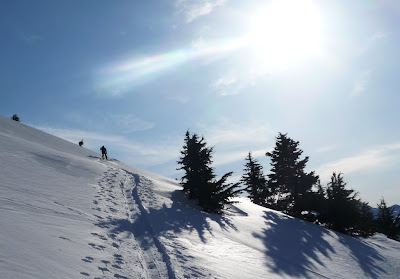 The lower north face had about a 10-inch deposition of great powder burying the thick layer of breakable crust and the sketchy sugar layer beneath that. Snow quality was perfect for an April north face run. 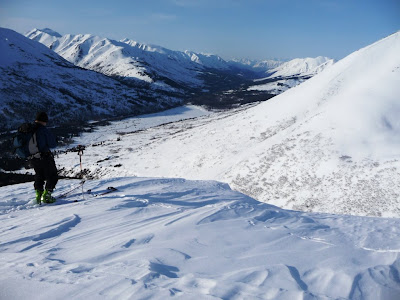 We would have had the area completely to ourselves, but about mid-afternoon Mike Hancock of Soldotna came up to make a few runs. Our climb synced with his, and when he said he planned to head back down the west face for a sun run, we just about dragged him down the north for powder. He didn't seem too upset. I posted a couple pictures below that he emailed me. 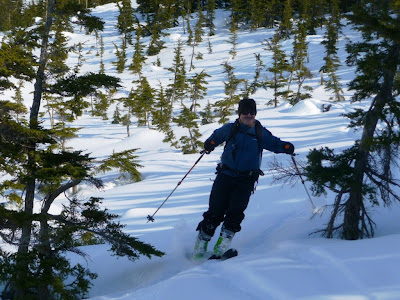 We exited around 7 after five laps. to maximize powder we went out the north exit, which is a bit flat and a bit woody but a lot of fun. We skied straight onto corn, bypassing the usual inbetween suncrust where the powder has melted out, however, the thick layer of sugar is causing the bottom to fall out in many areas. Jack got taken by surprise when one of his skis plunged deep into some rotten snow and went face first. Though much lower than where Jack fell through, even on a board I began to wallow if  wasn't careful to stay on areas that have already been skied. Some more warm temps should take care of that. 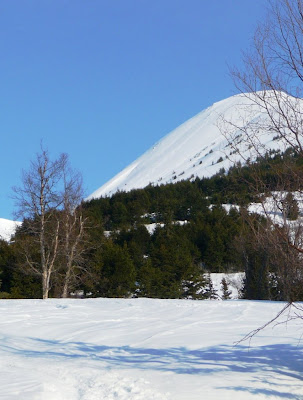 One last look back. 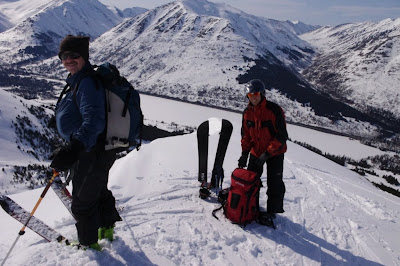 I always appreciate getting to see the mountains through other people's lenses, and better yet, a few pictures of yours truly on my own blog. Thanks again Mike, hope to see you out there again. 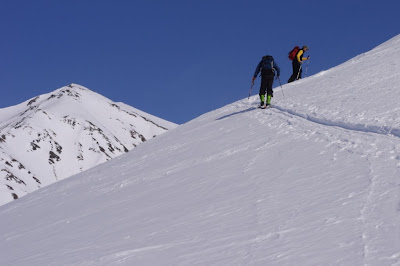 Jesus Christ, dude. I got tired just reading this.