It's the time of year when legs, strong from a winter's worth of skiing, pair up with the crystalline ice structure known as crust snow, to make for epic adventures on skate skis. I took a trip down to the Peninsula this weekend to get some car work done and put some miles away on skis. Chalk another one up for the small town by the way: affordable car care and reliable trustworthy mechanics seem to be easier to come by. I guess when you're only working with a small population base it doesn't pay to become known as a rip off. After the suby had its recently discovered gas leak repaired, I headed back to the lodge. The ice is out on the river, probably for three weeks or so now, but the shore ice builds up thick through the winter, due mostly to groundwater seepage that pours across the mostly exposed river bottom, and glaciates, forming a thick cover. Typically, by breakup, the shore ice is about 4-feet-thick at camp. The surface of this ice is more crystalline than most other waterbody ice, perhaps because it forms gradually and from the top up not the bottom down. As it melts it has more of a course structure that suits the gliding nature of skate skis well. I've tried to take advantage of this in the past, but last winter for example, the inside bend just below camp was washed out during breakup, and it wasn't possible to ski around the corner. I could have just walked through the woods obviously, but the woods aren't exactly all that open, and though the river is mostly uninhabited by people though the winter, the few that do live there don't tend to take kindly to trespass. This year, however, the bank ice hung on just below camp, and after scouting it out on foot, I decided to put on the skis and see how far I could make it down river. 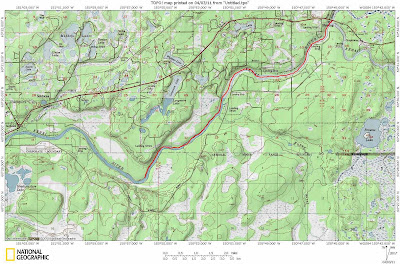 Since I started by first skiing upriver to the confluence of the Moose, that's where my ski started for the sake of the map. I made it about 10 miles downriver to what's referred to as upper, or second powerline. Down river from there the shore ice appeared narrow and broken for a long distance, so I called it good and turned around. Surprisingly, skiing back upriver was easier thanks to a scoot from the winds, beginning to build with an incoming storm. 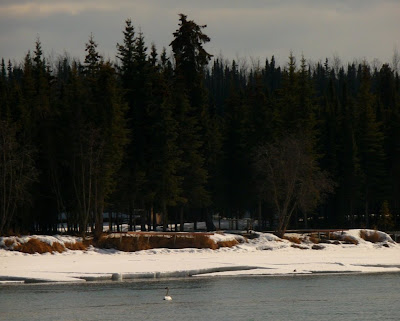 The river is a quiet and rather wild place this time of year. Most homes are empty, and due to the generally fast nature of this stretch making for poor winter trout fishing, few if anyone fishes it after mid October. This all makes it ideal for migrating waterfowl. I claim to know nothing of birds, though this is a swan, I can safely say that much, but there were hundreds of ducks of many sorts all along my ski. Many would come bursting out from under the overhanging shore ice where they had taken refuge. The hundreds of eagles that line the bank are clearly tired of picking the bones of freeze-dried humpy carcasses and much prefer fresh duck. 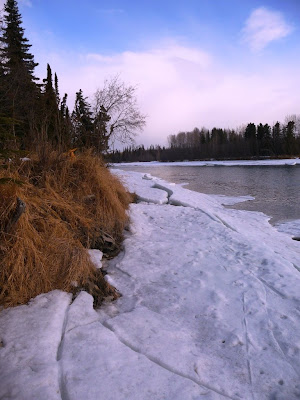 For the most part I found wide open stretches of ice. Several spots, however, were a bit tight. One unforeseen challenge was that when the river went out and the shore ice collapsed, it caused the large plates to settle in a staircase-like manner, where the block upriver of the one below was anywhere from a fraction of an inch to a few feet higher . On the way down these little drops were were pretty fun, but on the way back up I had to be a bit more careful in my route decisions or do some fancy footwork. 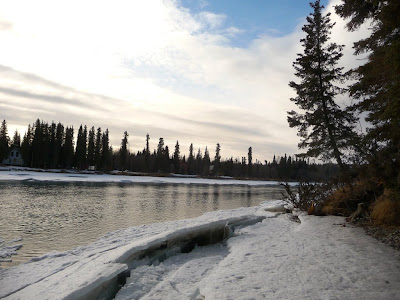 This was the trickiest spot along the route thanks to a clotheslining willow overhanging tilted ice. There were very few spots that there was any actual danger of taking a tumble into the river, but of the few there were the consequences were high. In retrospect, wearing a pair of self-rescue ice picks would have been wise. 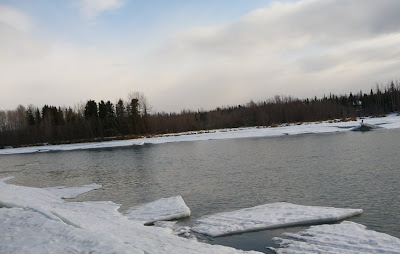 A juvenile bald eagle is sitting on the large up-thrust of ice across the river. Note the old snowmachine tracks on the plate ice. Also note how much thinner the river ice is compared to the bank ice, not to mention that you can't plunge into a moving current on bank ice. I would not recommend skiing the Kenai when frozen solid as it's nearly impossible to tell the difference between river ice and bank ice. While the plates in the picture above are thick enough to hold a cross country skier, and obviously a speeding snowmachine, falling through would mean almost certain death. ---- ------------------------------------------------------------------------ Kasilof Karl and I were hoping to carve powder on Saturday, but a dismal Friday report from Pete told us we'd be better off looking for another adventure. Creative Credit goes to Karl for heading to the Skilak Lake area in search of crust. When Karl called around noon, winds in Sterling were, blowing a steady 10 mph and building, with gusts in the mid-20s. "Well, were going to get blown around wherever we go," we agreed; so why not go to one of the windiest places around, Skilak Lake. Drained by the Kenai River, and fed by Kenai as well as Skilak River, the 15-mile-long, 4-mile-wide and 528-foot-deep lake is the rearing ground for millions of sockeye. It's east-west orientation also makes it an amplifier for east winds blowing out of the Sound. 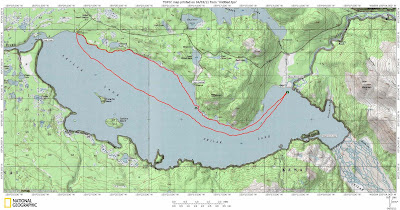 When we got to the lake, winds speeds were blowing a steady 15 with gusts up to 40 (read stopping power). Leaving from the Lower Landing, we hugged the northern shoreline, taking advantage of of both the lees provided by the minor points and bays, as well as the better surface condition of the ice. The western part of the lake was more smoothly polished by the accelerating winds and too far out from shore it offered nothing for the skis to kick into. 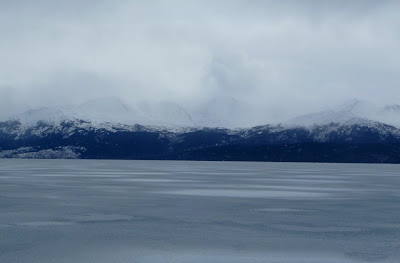 The patches of white looked like standing water, but was actually snow that had fallen Friday night. Heavy and wet, it was worth avoiding. 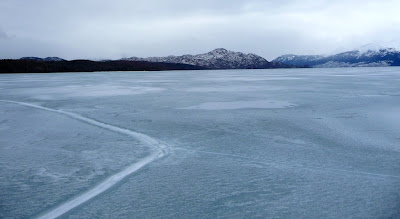 Looking north, we stared at this point for about an hour and 20 minutes. 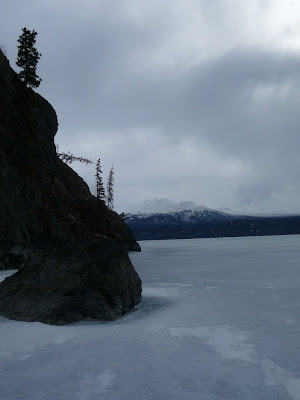 Once we made it up against the knob that protrudes into the lake we took shelter and had a snack. Despite the severe headwind, we made pretty good ground, and as we moved east, the texture of the ice improved, becoming more crusty and better for skating. 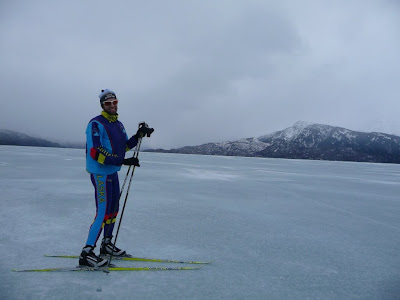 Yours truly, facing toward the Skilak River inlet. The winds were fiercest here, channeled through gaps in the mountains and driven by the frigid air pouring off of the Harding Ice Sheet to the south. After another hour of skiing we made it to within about 200 yards of the inlet of the Kenai River where we could see lots of open water. That was good enough. We had basically been climbing for over two hours non-stop, and hadn't gained a single foot of altitude. Now we had a long descent awaiting us. In 20 minutes we made it back around the point where an hour earlier we had eaten. 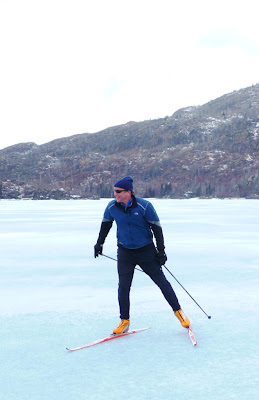 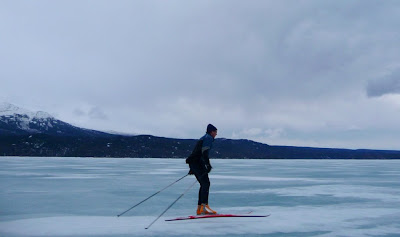 As this wind blasted us further ease we hit the polished blue ice negating the need to even skate. All you had to do was stand up straight. If you lifted your arms you would actually accelerate, but if you tucked, the normal way to build speed, instead you would slow down. We were back at the car in 50 minutes after leaving our turnaround spot.

Above is Karl is skating along into the wind. Since it is only flat and the surface is ice, even with a stiff headwind, its still possible to keep up a pretty good pace.

Above I buzz by Karl.

Karl shows that you don't need vertical terrain to crank turns, just a patch of snow and some skis to crank on.

My favorite of the day, I always like ski POV videos, plus, watching the ice zip by and seeing how Karl is just standing there getting blasted not skating and only making one half-hearted double-pole really shows how strong that wind was.

Well, is it next weekend yet?

Thanks. I think I found lenses too!

I like the classic DP laugh at the end of the last two video clips. Good stuff here and in the Reporter.

Thanks and thanks anon.