Rachel came to visit last week. It was too short and I'm none too happy about her return to the east, but no surprise there.
We spent a beautiful extended weekend down in Homer at the beginning on her trip soaking up the plentiful sun and skiing. 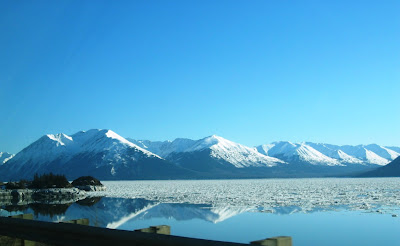 Hope, and Resurrection Pass across an icy Turnagain Arm. (Courtesy of RS.) 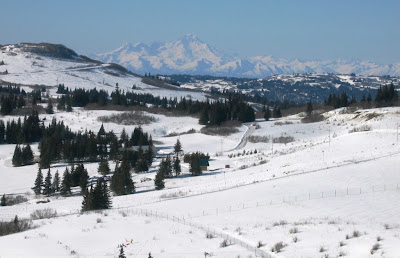 Iliamna, seen from the Ohlson Mountain Trails. I know the white spruce, and glacier-clad mountains are a giveaway, but some of the vistas above Homer remind me of the rolling pastures I grew up with back east. The open park lands on these low rolling domes don't harbor hers of bovines though, just a few lanky-legged moose here and there. (Courtesy of RS) 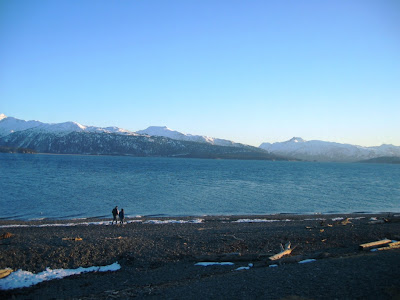 Winter-rates allowed us to stay at Lands End, named for its location at the end of the Homer Spit, the end of the North American continental road system. (Courtesy of RS) 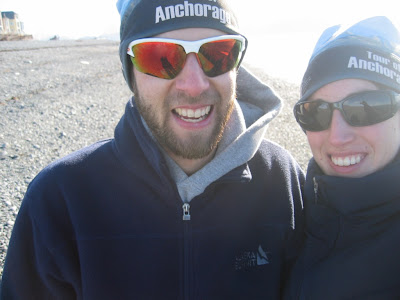 (Courtesy of RS)
While we were in Homer Karl called up to report that he skied the Kachemak Nordic Marathon the previous Saturday and the trail was as good as he had seen it in year. Despite the lack of snow this winter, the high winds over the past few weeks had helped to do much of the groundwork for the groomers, who just had to polish it off for the race.
He and Pete came down and Rachel put up with our obnoxious behavior by giving us a lift from the end-point at the Baycrest trails and dropped us off at Ohlson where she could ski in peace! 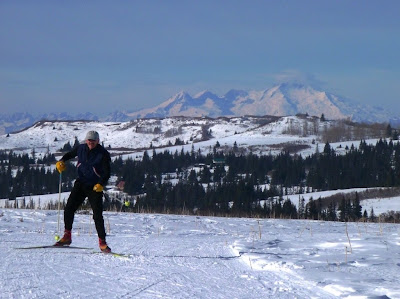 Mili's World. Pete, with Iliamna in the background. 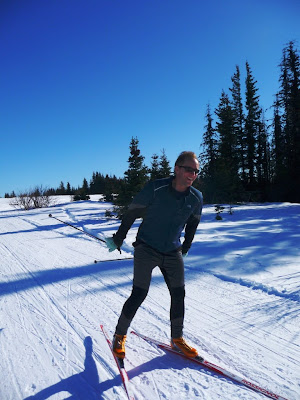 As usual, Karl is all smiles. 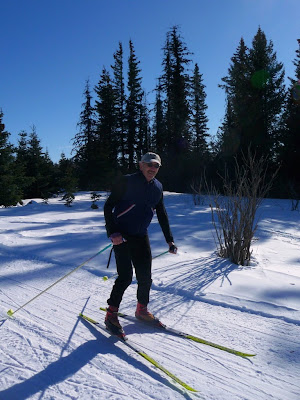 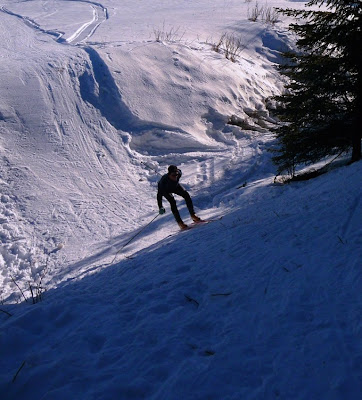 Karl pulls a few Gs flying up out of "Milk Toast." If this picture looks like a play on lighting and angling that wasn't the intention, it's actually just one of several steep-sided half pipe like gullies the Marathon connector trail traverses. The Marathon course is a little different, lulling skiers with magnificent views across Cook Inlet and Kachemak Bay, then suddenly diving through gullies, zig-zagging through tight corners, and watch out for that giant collapsed sinkhole that wants to swallow up your skis.
We took out time and enjoyed the long ski, but at the end, Karl and I got a little too excited for the long descent down to the baycrest trails and "lost" Pete, who ended up having to find his way out on a let's say, scenic but rather odoriferous route. Oops. That was my bad! It worked out OK in the end though, Karl and I repaid him for his troubles with a cold one at Fat Olives where we all met up after.
Posted by Dante at 10:33 PM

Nothing like spring skiing in Homer on a clear and sunny day. Off the top of my head, I can't think of a better xc skiing experience. I'd suggest a slight edit to the post. "Winter rates, and my new job in the natural gas industry, allowed us to stay at Land's End."

Anon, $85 a night at Lands End is still $85 more than sleeping in a tent on the beach, yes, got me there, and you get complimentary seagull crap on your tent. On the otherhand, it's $100 a night for a room onshore in the "Bidarka Inn" with sweet parking lot views. Methinks even on a PC budget I would have made the same choice.