Reports have trickled in since late August of winter's most dedicated fans cranking turns on the first snow of the 2011-2012 season since late August, from Hatcher to the Kenais.
I'm all for a seasonal lifestyle, especially with my summer sports. In Alaska, you can ski all 12 months of the year if dedicated, but in the middle of the cold winter months, good luck finding any soft, warm earth or even pavement to ride.
That being said, there are times of year when skiing and riding are both good, and plentiful, and this weekend that was the case.

On Saturday Mike C, Dan, Alex and I headed to Crow Pass hoping to find a little white on Summit/Jewel glaciers.
The smallish remnant glaciers are within two + hours of the Crow Pass trail head outside Girdwood, and are popular early season destinations for powder-starved Anchorage-ants.
We left under cloudy skies, and determined that given our general condition (suck, except Alex who was ready to rip after chasing the snow up high all summer) and visibility, we would head up and scratch out a run and get out if we were socked in.

﻿ ﻿
As we neared the top of the Pass and our exit into the valley that cradles the two small glaciers, the skies began to part and we were stoked on the thought of good visibility in a place better known for soup. 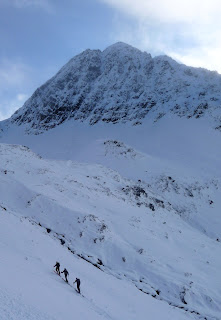 The first day of the season in one of lots of sore spots, feeling a little awkward, and unfortunately for me, forgetting poles. I ended up sufficing with a pair of weighty alders I broke down low. I cursed them on the hike up, but when we began to skin I didn't complain at all.


We were treated to fantastic views in all directions and 18 inches of consolidated, very stable powder, worthy of the best days of mid-season. Best of all perhaps, was that we had two runs in before the first party showed up. By the end of the day hordes were making their way up the trail, but we laughed as we descended, tired and content, that we had left little for the late-comers.

Tired and sore weren't strong enough words to describe how my body felt Sunday morning as I forced food down my throat in the pre-dawn murk, but another big day called to the south, this time nabbing the epic Lost Lake Loop with Adam R.
I've ridden this loop about this time of year in 2009 and '10, but the Eastern Kenai has seen significantly more precipitation this fall than in the past, including several storms that ranked as equivalent to Cat 3 hurricanes.
Needless to say, the trails are wet, but such is nearly always the case down there, and with cool clear nights, the ground was beginning to firm up.
Additionally, I was lucky to have co-adventurer (Rachel) on this trip who could split up the driving.

We started in a fog on the shores of Kenai Lake at the Primrose Trail head and rode south on the Iditarod Trail through Divide and down to Seward, making the return by going up and over Lost Lake.

The immense cumulative elevation of the ride wore at my already tired body and I hit a wall mid-way up the Lost Lake Trail. I reloaded the tanks, but the rest of the ride was slow-going for me.

The only snow we encountered was a brief section on the north-facing side of the plateau above the lake. Since we were headed down it was easy enough to ride through. 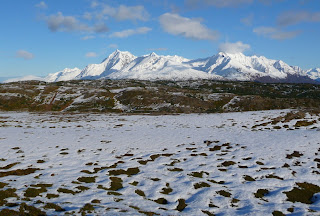 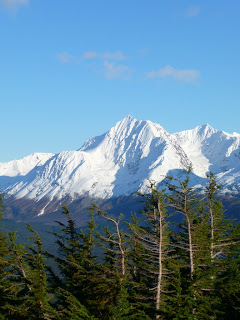 Great Shots Dante. Makes me want to head to Lost Lake this weekend, but it looks like I missed the window.,

Thanks for the picts and story Dante! I could see the snow level that Adam was describing.