Home for the Holidays

6:00 p.m. AKST Thursday﻿, December 22, 2011: Snow is falling heavily across the Anchorage Bowl in Anchorage, Alaska. My planned 18-mile skate ski has been buried under the four inches of of snow that's fallen since mid-afternoon, and I'm now working up a serious sweat on classic skis, fretting, "Why does she do this to me?"
This tempest, she pulls at my strings. For weeks, she's screamed and howled, then showered me in love, only to throw another tantrum and leave everything in ruin.
The snow is falling so hard now that it's begun to accumulate between my glasses and the bottom of my cap. I reach up with a pole-strapped hand and flick away the icy mass several times, trying not to slip out. I suck at kick-waxing and I can't get enough kick but the fresh snow is slowing my glide.
This was supposed to be a quiet weekend. We were to go to Sterling and hang at the fishing lodge, get out of town for a few days and relax.
When I checked the weather less than 24 hours ago, the forecast was unimpressive to say the least.
When I checked it before I left for my ski, Anchorage was under a blizzard warning and on the Doppler, a blob clung tightly to what is the general vicinity of Anchorage and the Mat-Su Valley, while the normal snow hot spots and the Cen-Pen saw but a few passing whisps.
It was on. The storm had arrived, as high above in the Anchorage Front Range, the Chugach peaks that form the backdrop of everyday life for the vast majority of Alaska's population, the snow too dumped, and yet, after four storms blasted through in the previous three weeks - two with winds topping 120 MPH - not a flake was stirred.
On Friday morning the FR ridgetop weather stations revealed that the winds had not blown overnight, and the forecasts called for none. This is abnormal for the FR to say the least. In the driveway, a little over a foot of light density snow had accumulated overnight.
The thing about my driveway is, that with a short jaunt through a neighborhood trail and a few skiffs across one road, I can access all of the FR without touching another road. I can't say exactly where I live here, but, suffice to say, it's one of the best places I can imagine for getting out.
Once was a day, years ago, where almost all of my great adventures started from base camp home. Long bike rides, hikes, backcountry ski, you name it, I grew up at the foot of the Green Mountains, an old logging road lead from my front yard to where ever I wished to go.
Those years seemed a thing of the past, until I moved to, of all places, the confines of Anchorage. So, long before the sun rose on Friday, I set off to reclaim something I thought I lost.
Up early, I beat most of Los Anchorage to the trails, and was so "fortunate" to break trail for about three hours through all the fresh snow. The STA trails down low were perhaps the worst, as their trough shape caused snow to collapse on top of my boards.

Past Prospect Heights Trail Head I was sure I would find the track of a skier or two, eager to stride in the fresh snow. Alas, I was disappointed to find none, and realized I would instead have to break trail for another 2 miles before I would hook into Jack's trail leading to the summit of Wolverine.
Up in the cradling bowl of Wolverine Peak the snow had gone from a foot to about 2.5, and was dry and light.
In the flattish light, I watched Jack and Adrian make a descent. I was confused, they disappeared.
The snow was so light it just billowed into a giant cloud creating a continuous face shot the whole run. If we didn't breathe carefully or use facemasks, the powdery snow was easily inhaled.
It sounds terrible, but this is the kind of snow that only happens in dreams and big-budget ski flicks.
We were in neither, but incredibly stoked.

Jack offered to give me a lift home, but gosh darn it, I was determined to ski from my home and back. So I headed back down, crosscountry snowboarding back down to the Campbell Creek crossing. I made a short shuffle back up to the Prospect Heights Trail Head, before re-assembling the board for one last descent down the Gasline Trail. From there, it was a short shuffle back to my house.

The trek home gave me the chance to take some pictures of a place I spend a lot of time, the Hillside Park at night. This is about a two-minute drive from my house, and these are the trails I ski nearly every night. The Hilltop Ski area is a little ski hill that runs in the afternoons and weekends, and has a very healthy business of young'uns tearing it up. Every now and then I catch conversations and shouts, "Hit it! Hit it!" "Aw siick!" that make me smile and remember when that was me and all my pals, terrorizing the Snow Bowl.


By the time I made it back to my backdoor, it was dark again, and had been over eight hours and 14 miles.

On Christmas Eve Day, having thoroughly tracked out the northerly bowl of Wolverine Peak, Jack Adrian and I went over to Rusty, a peak that forms the terminus of Wolverine's southern ridge.

My body, decimated from the previous day, begged for rest, but snow of this quality is rare, and snow of this quality in the FR could only be described as a Christmas miracle. I passed on the backdoor departure, and Rachel gave me a lift to Prospect Heights. On the drive up, I realized how far, and how much elevation sat between!

Light was flat, and though the snow was good, it was baseless. Our boards all found tundra and rocks. One left a deep, ugly gouge in the split.

The trails were packed in much better and my exit was far easier. I still skied down the Gasline and shuffled home, smiling the whole way, because I could.


On Christmas, Rachel and I relaxxed as snow feel outside. In the afternoon we carried on a Christmas Day tradition of poaching a ski run over at Hilltop. 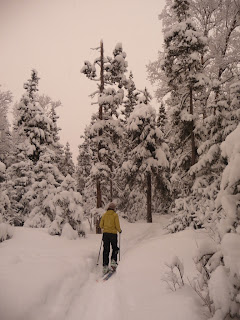 High in the mountains on Christmas Day, a wind blew, and though, by FR standards it wasn't much to speak of, the light snow was quickly transformed.
Jack, Eruk, Lucy and I hoped the northerly gully of Wolverine would collect it, but instead we found a thick, low-density slab up high.
It was a day for fat boards or one board. The split, with a touch of speed, lifted up ontop and I was able to make nice consistent turns. Skis, struggled though. 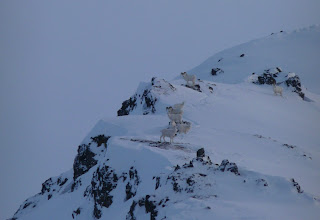 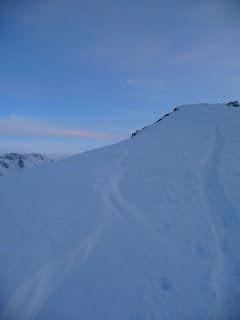 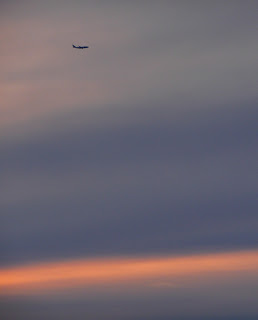 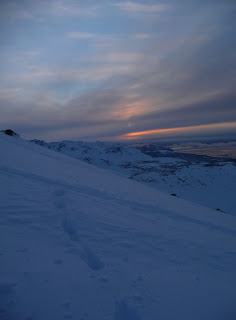