A full moon hovers clear above a snow-covered land.  White mountains catch the light, tossing it out over the coated forests that carpet their feet.
In this magical land of colorful skies and fairytale forests, the denizens appear to live happily; frolicking little snow creatures that glide upon magic boards that whisk them wherever they wish to go.
But this land is not what it appears.
Over their shoulders, the snow creatures know, a wicked demon is watching and writhing, seething with fury, her anger grows more ferocious by the day.
Without a second's notice she'll spin upon them, throw her head back into the cold, night air obscuring the stars and the moon. With wild white hair flying as she shakes her head, the snow will rise up vertically in plumes from the ground upon it once sat, and the demon will shriek, a shriek that's pitch builds and builds.  The white robes that cloaked he forests will fly away in a stinging spray, and a roars of wind bends tree to the point that they simply uproot from the frozen earth and collapse in defeat. The snow creatures cover their faces as the witch's hair whips their faces, running for the cover of their lowland retreats, praying that the rooves over their heads will stay put through it all.
-And that's just what the National Weather Service has to say about things lately.

Southcentral AK is getting pummelled this season. Some years are snowy, some cold, some windy. This year has been all of the above.  Coastal villages of Prince William Sound have seen snow totals of over 20 feet. Such a number is not shocking for that area when talking seasonal totals, but it's not even mid-January.
Here in Los Anchorage we are at a cumulative 80 inches as of this writing, with a supposed additional 6-18 inches forecasted to fall in the next 36 hours. Average annual snowfall for Alaska's largest city is about 70 inches, and the all time record is around 132 inches, set in the winter of 1954-55. Snowfall is common well into April in these parts.
But the season is as fickle as it is long. We've also seen a surprising number of "Chinook" events - sub-tropical blasts of warm, wet air that regularly cause wind gusts to exceed 100 MPH along the coast and higher elevations. Anchorage has seen five of these thus far this winter, with several other strong fall storms that preceded that.
Additionally, temps have not shied away from the negative mark, and though no records are being set in that arena in Southcentral yet this year, the Interior regions of the state have dipped to the -50s several times thus far.

This strange combo has created a fairytale feeling for the environment, where conditions have gone from fairy tale perfect to nightmare in matters of hours.

Here's a slew of photos from the last few weekends out and about. 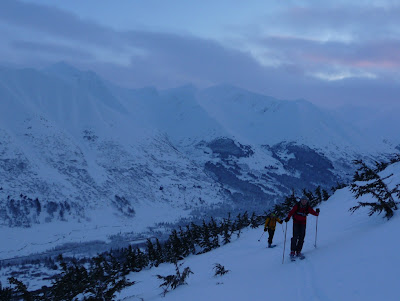 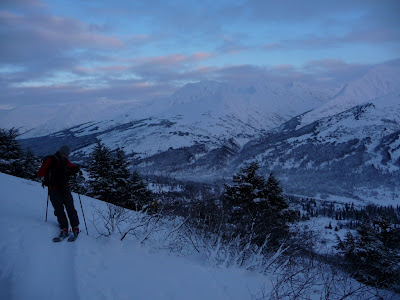 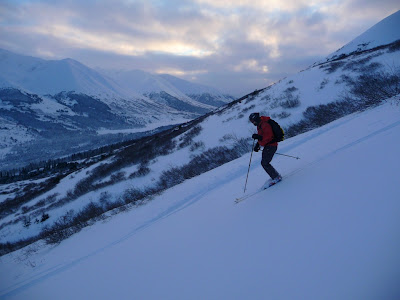 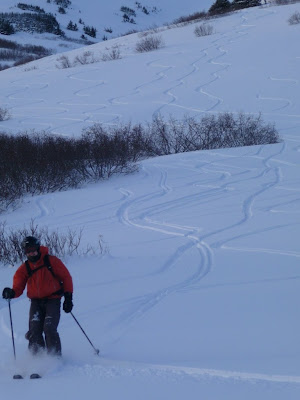 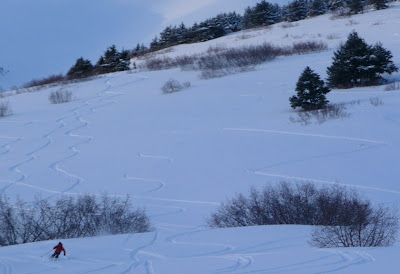 January 2, 2012:  Tenderfoot traverse:  "Skied a sunset run with Rachel. Went up Tenderfoot Creek and came down the ski hill." 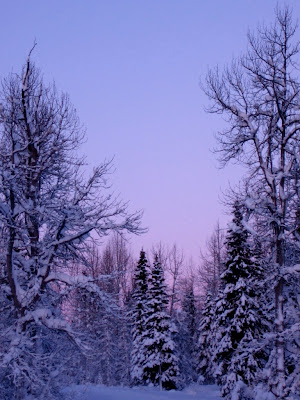 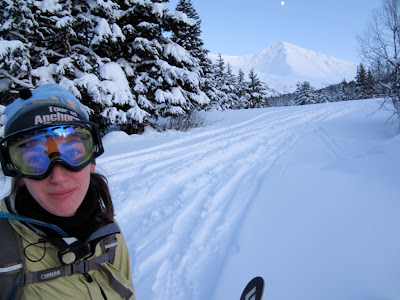 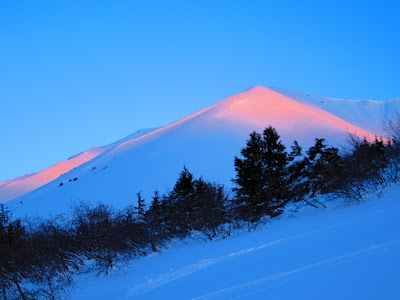 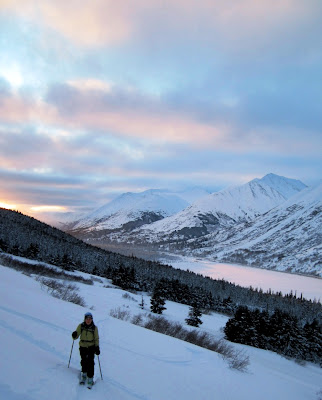 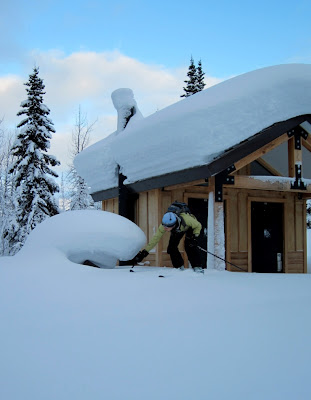 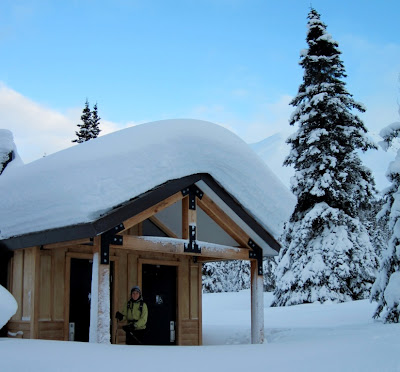 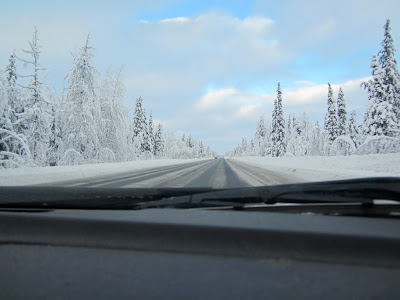 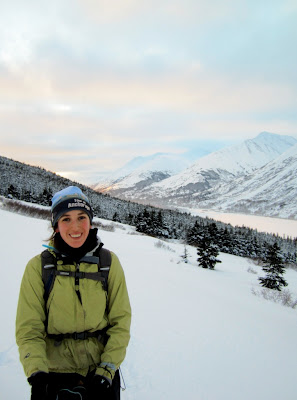 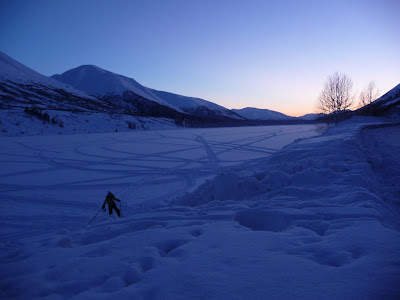 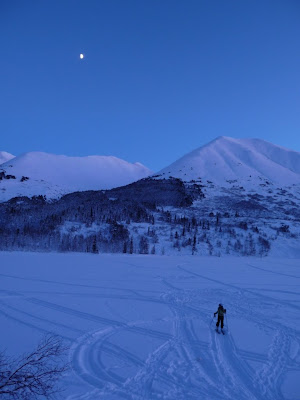 January 8, 2012, Wolverine Peak's center ridge:  "Brian and I got dropped off at Prospect Heights TH by Rachel with the intention of skiing Wolverine Saddle Bowl. At the rocks the winds was blowing and we decided to make a run in the hemlocks to see if weather would abate.  Wind on the ridgeline was fierce and cutting, blowing lots of snow, but exceptional skiing on the westward side into the trees. Four short laps there before descending back down to the house, 10.7 miles, ascent=4.1k vertical feet, descent=5.4k vertical feet). 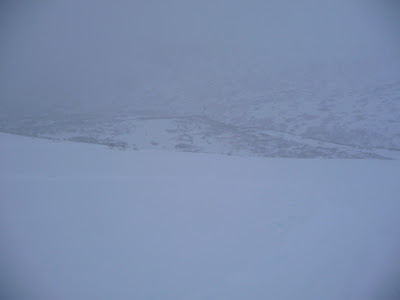 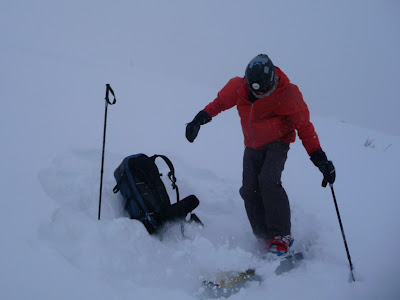 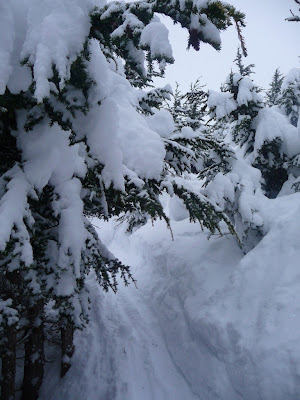 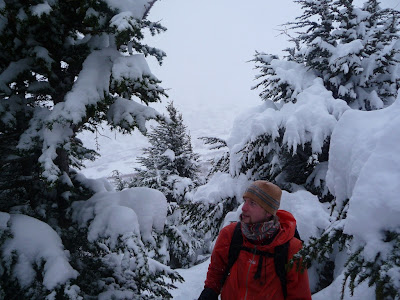 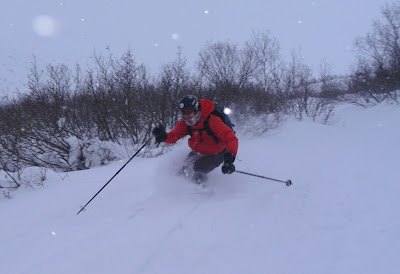