There's nothing fun about "below zero."
After literally weeks of incessant storming, the skies have cleared, and the orb of fire has reappeared in the sky, flying just a little higher than it did whenever he was last seen, sometime ago.
The thing about clear weather in January in these parts, is that it usually equates to deep cold.
I'm not talking Interior Alaska cold, like -50s or anything, which is what areas like Fairbanks see this time of year, more like -0s to -20s. I realize that Interions wouldn't bat a frozen eye-lid for Southcentral in times like these, but I didn't move here to play try and get frostbite either.
At the apartment, which lies in the toe of the Anchorage inversion zone, the mercury has struggled to climb above the 0 mark under the "F" column these past few days, while lows at night have dipped to about -10.  A few hundred feet above us, deeper into the inversion, temps are a good 10 degrees warmer.  Below us, they're 10 degrees colder.
Toward Anchorage's coast with Cook Inlet, temps again move up a bit.
This weather pattern is typical in mid-winter here.
In some ways, these days of crisp scenery, snow-clad trees, breathless winds and temps cold enough to crack the base of decades old trees in the middle of the night, are not much different than the ideal days of July that are so often equated with summer. It's just a state of mind.

On Saturday Rachel and I headed to Turnagain Pass to make some turns and tour around the Center Ridge area.  Center Ridge, as its name implies, is sandwiched between the two prominent peaks, Tin Can and Sun Burst, and protrudes a little over 500 feet above the valley floors of Tin Can and Lyon creeks, to its north and south, respectively.  The area is heavily treed, low-angle, and gets boatloads of snow. The Turnagain Pass NOAA Snowtel site is located at 1,800 feet on the ridge, and on Saturday was registering a snowpack depth of 80 inches (it has since subsided some as the snow settles over time).

Temps were -3 when we left the car in the morning, though up the ridge they felt above zero.  Temps these cold make the snow dry and very slow. This was ideal for Rachel, who is still getting used to the concept of actual snow and powder.  When we got back to the car in the evening the car registered a temp of -13, and my skins failed on the tour back. 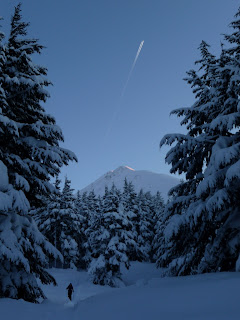 On Sunday Brian and I headed north to Peak 4068 in the Government Peak area of Hatcher Pass. We were drawn chiefly by the lack of winds in recent days and expected lack of crowds. Summit Pass had been buffed out up by high-winds as the weather pattern changed, and showed signs of dangerous instability in its snowpack, while Turnagain was getting lots of attention from skiers and borders.
We chose Hatcher area for lack of winds in recent days and the 4068 area as the bowl was relatively high and would thus be warm, not mention it was partially sunlit.
We were right on all counts, except the wind. While the last few days had been calm, the fifth Chinook of the 11-12 winter had hammered Hatcher and left upper-level snow quality variable.  We enjoyed sun and a good uptrack through the day regardless, making a summit run and two runs in the 4068 Saddle. 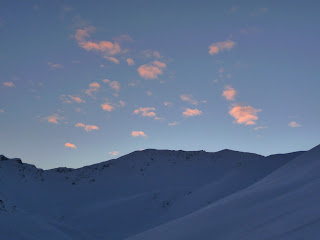 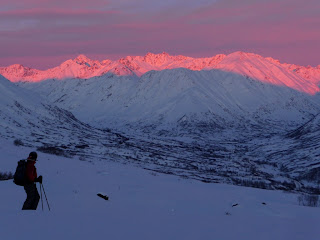