There is a phenomenon up here that involves the Coloradan. At some point, there is a good chance that every outdoor enthusiast in AK will get into a group where at least one individual whose spent some time in Colorado will feel the need to make repetitious statements about the state of Colorado, and how it sizes up to Alaska.
There are not often complimentary of AK.
These comments are not suprisingly not well received by people that came to Alaska seeking Alaska, not hoping to some how find Colorado somewhere near the Arctic Circle.
Alas, there is a place in Summit Pass, where perhaps a Coloradan could feel at home, though only in name and little else...and for the record, most of those who ski Colorado Mountain in Summit could give a damn about how Colorado Mountain compares to Colorado the state.
Tele-Pete gets creative credit for this weekend, and has been dutifully keeping an eye and his skis on snow conditions there through the week. Pete,reported that Colorado would be the ideal place to head.
While various sources are moping (LINK), rather loudly at that, about the dearth of snow up here this winter, a lot of it is probably a result of  being jaded from the 100-year winter we had last year and ugly conditions down at sea level.
Up high (1,000 feet plus), for the most part, snow packs are about average and slowely healing; and in some cases they are comparable to a year ago.
The one major exception is Summit Pass. Summit is WAY under. Impenetrable alders still blockade the lower slopes of a lot of the hot spots.
Colorado was a bit tricky to get into, especially for mid-January, but having bushwhacked up this peak a number of times, it's various dead-end spruce alley ways and thick meadows of alders have become fixtures in some primeval part of my brain, singed there by experiences I'd rather not repeat.
Jack and I arrived at the trail-less trail head under gray skies and started picking our way through a mostly breakable crust, that gradually became thinner and drier as we gained elevation.
At the base of the knoll that breaks Colorado's east slope, the crust disappeared, and as Pete reported, we found boot-top powder that went all the way to the last of the hemlocks before turning into slabby wind crust.
Pete, who was a bit behind us, reeled us in, and we took a run down the normal east face.
The next lap, recounting a day we veered northeasterly, Jack and I headed down the so called Santa Clause gully that drains into Fresno Creek. At the base of the gully in the meadows we found the vegetation was well covered, and meadow skipped all the way to the Fresno mining road where we found an old skin track. When we looked up, we saw Colorado's northeast face above us, and we knew what we had to do.
We felt bad, as Pete had headed back around the knoll, and we had initially intended to head back up Clause Gully and rejoin him, but the terrain here needed our desperate attention.
The face was well protected from a northeasterly wind by Fresno Ridge across the way, and may have even held slightly deeper and less settled snow, not to mention a steeper, longer, and unbroken run.
Jack launched the first run down this side and quickly threw up some big contrails on the steeper slope.
Exiting back to the highway later that day turned out to be far easier even on a board than it typically is thanks to a few sets of tracks heading down and firm crust to stay atop of.

On Sunday, Colin and I headed back.
We hit the trail head and were greeted with hot and heavy snowfall that was coming down at well over an inch an hour and plastering onto everything. Six inches had accumulated overnight at the road, and by the end of the day would total about a foot there.
We didn't waste any time, and rebroke a trail first up the east side, then dropped lower Clause gully right away, and broke a new trail up the northeast side.
In retrospect, I wish we would have just gone up the mining road to this area, but I'm not completely clear where it starts, and the uptrack on the east face made exiting in the dusk a bit easier.

After a party run from the hemlocks, the skies began to break up overhead, and the snow started to back off.
The slabs we encountered the day before above the trees were now covered, and the fresh snow was hanging on tightly, so we pushed higher up into the alpine and dropped the upper portion of Clause gully.
There were a tenuous few minutes as we transitioned off those slabs, that the day before creaked and groaned loudly, but today were stealthy quiet under the new snow, though still sitting atop the same lurking garbage hoar at the ground level. Once we made it a bit higher up the rib we were essentially on a foot of fresh on top of maybe two inches of crust on top of tundra and could again breath a little easier.

As we went for what appeared to be the last run of the day, the skies really started to split and the evening colors came out. With less than an hour of daylight on the table, we slammed it to the floor and pushed all the way to the skyline ridge so we could drop Colorado's 2,000 foot east face express route. 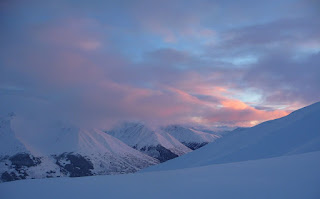 We schussed across the top of the express route and found that it's south-facing entryway was shallow, but the north-facing entry had a nice slab under the day's fresh snow, which was now somewhere between shin and knee-deep and undisturbed by the wind.
We hurriedly transitioned, and dropped into the long run with the Pass lit up below us.
I think I felt the base once on my first turn. It was bliss the rest of the way down to the meadows.

Colin said he thought I was joking when we left the car and I mentioned something about skiing till dark. That's just the way its supposed to be right?

This was the first weekend too that I took my new set up, a Jones Carbon Solution (LINK) with Karakoram Split30 bindings (LINK) out. I'd used the 30s before on the Voile, and was more comfortable with them on this outing, as seen below. The Jones Solution is definitely a new beast and rides much differently than my Voile Mojo. Conditions were ideal for it actually, and it performed well. It will probably take another day or two of making turns to really get settled on its ride, but one thing that will take no adjustment: it climbs like a champ.