Working for the Jan

Some Januaries in AK bring cold, clear stability, and despite their short days, open the window for some of the first big lines of the season.
Josh O more accurately described January 2013 as "chilly and windy, waiting for 40 and rain."
That easily summed up the last week, where above freezing temps climbed well past the highway elevations and basically to treeline in Turnagain and Summit. Accompanied by the warm, was wind.
This made for some very comfortable after work skate skiing last week, but did not bode well for weekend adventures.
Tele-Pete, yet again, clicked into his skis as the windows began to open on Thursday, and marched up nearly 1,000 vertical feet of supportable crust, only to find an unaffected, densified powder just above 2,000 FSL.
Josh and I headed to my new favorite playground on the NE side of Colorado Friday morning.
I was curious to see if we could pick up the Fresno Mines Road that slabs Colorado's north side for a more direct route to the playground. I suspected the road would start at a recently active mining claim across the street from the Mainitoba lot.
WRONG!
We canyoned out, but having made it far enough back, decided to try our luck scaling up the walls and through the brush.
WRONG!
We were clicked out of our skis and kicking steps in no time, swearing up a storm, eating pine needles like sprice chickens, and fighting our way through dense hemlocks for 45 minutes until we busted out. Things got so bad for a while that I would have to squirm my way through the branches about two ski lengths forward, then Josh would slide me the skis and poles and follow.
FUN!
Once out of the brush we found the road, and I was forced to sleuth its beginnings later on the way out. As it turns out, this road starts near the Lower Summit Lake lot, for future reference and pain avoidance.

The supportable crust did make for easy cruising on the way up; has safely sealed up all the buried vegetation; and despite running fairly high up, transitioned from supportable to breakable to powder in a distance as short as two vertical turns.
The powder Pete reported on Thursday had dried out and lightened up overnight as expected, and exploded into cold smoke in every turn.

We notched a run, and then Josh decided to go aggro on a small clump of alders. I didn't see impact. but I heard it loud and clear, and caught sight of Josh's orange boots where his head should have been as he flipped forward into the snow.
Alders always win.
At the top of the next run, Josh noticed the alders really did win. The top sheet of one of his skis had ripped up under the binding to make some sort of new fangled, reverse, top-side camber. Except for the side-to-side torsion, it didn't seem too bad, and the snow was sweet, so we launched again.
At that point though, Mr. Wind had noticed our fun, and wanted some freshies too.
Thing is, when Mr. Wind wants freshies, he gets 'em all. In the course of one run our slope had lost half its snowpack, and temps had dumped 15 degrees since we started. I had on all my layers, despite having been dressed pretty warm given the day's earlier high ambient.
We called it. 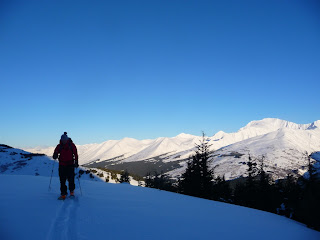 By Friday night the northwest wind was raging through the passes and temps had ditched it down to -10 on the ridge lines, with no hope of an inversion setting up. I figured I'd call the rest of the weekend a loss and skated surprisingly good trails despite a low ambient in Kincaid on Saturday, pretending I could feel the sun.
Tele-Pete, undaunted, headed up into the sure-to-suck cold and windy mountains and found that favored aspects were holding their own, and still skiing quite well.
More, sheltered aspects were showing good signs of stability.
Stoke: On.
I've had what's locally known as the Moonrise Shoulder of Ravens Ridge in my sights for a while as an optimal mid-winter locale, and it seemed like an ideal time to investigate.
The area features a broad, south-facing shoulder, two cirqs, and a peak known as Nancy's Peak or the Pfieffer Horn.
There are a ton of different lines in here, most unskied due to massive cornices that build up off the ridge. Mike C. joined me for this endeavor sporting his new DPS Wailers.

The climb up the shoulder was steep and at times daunting, but stability was good except for a few suspect fresh pillows that were easy to avoid.

It was good to be back on top of Ravens. It's hard to believe it's been almost 3 full years since I've been up there.


Mike makes his first turns on a mellow ramp in Moonrise Bowl. ﻿

Though the snow was consolidated after days of no additional accumulation and continuous wind, the cold air had sucked it dry and the powder skied super slow with a lot less of the pizazz Josh and I saw on Friday. It was good nonetheless.