April 18, 2009: a proud day for the 26th Alaska State Legislature. With a mere 2 days to go in the uber productive 90-day session, the state's lawmakers raised a curled, fuzzy hand to the Lower 48 and the powers that be, and said "Nay."
"Nay, we shant be the subjects of some plump gopher, wearing a top hat, and surrounded by men in vintage vests reeking of a colonial past!"
"Nay, we shall have Marmot Day."
Yep, February 2 up here isn't ruled by some Punxsutawney punk, who apparently thinks Spring is on the way shortly, but instead by a marmot.
If anyone extracts a marmot from the frozen ground to see if it can see its shadow, and whether the sun would cast enough light to even produce a sufficient shadow to scare the critter back into hiding, is unknown.
What can safely be said, is that marmots and groundhogs probably have as a good a shot of forecasting the weather and the future as the NWS and the Mayans this year.
Temps have been balmy here, with a lot of light but mixed percip that has bounced back and forth from liquid to frozen flake and back.
In town, skating was all time last week. Glide was amazing, and the snow was soft enough to make riding a ski effortless, but firm enough to not bog things down. I was finally able to comfortably ski the Hillside trails starting last week, the first time I've been on them since mid-December without fear of hitting rocks.
Moderation was not a forte. Eager to lay the hammer into some KMs on trails I've been missing, I ended up halfway across town one night after work before I realized I should be getting home or just head to work.

Saturday, Nathan and I fittingly headed to Marmot Peak in Hatcher and met up with Brian. Temps were mild to warm; skies, bluebird; and snow, soft and fun.
We quickly synced with a big crew that had dropped cars at the bottom of the road run, and were able to enjoy the apx 3,000 vertical foot run down Marmots 2nd rib with them. Two more long runs were had on the peak's northwestern shoulder. 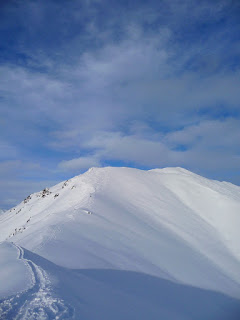 Our hopes for a repeat on Sunday were not to be had though. Thick clouds covered Hatcher on Sunday morning, and skiing the alpine in flat light was low on the list. Colin, Nathan and I drove south. Things were pretty ugly down low, with a temp of 41 in Girdwood and a dude driving a rig with California plates on it was wearing shorts at the gas station. Someone from AK, not a big deal, but California? That's really bad.
In both the passes, rain was falling at the highway, and the freeze line appeared to be a few hundred feet up.
After Saturday, no one was thrilled on the idea of skiing dense powder and rain crust, and for once, skate skiing the fast and cooler trails in town sounded not just like getting by, but a lot more fun. We turned around and were back in town before lunch.

Left my camera in Hatcher with Brian, so pics to be loaded in some other time.
Posted by Dante at 10:02 PM

Govmint Peak was OK Sunday. I saw no marmot shadows, no man shadows, and no other shadows; it was a little flat, the light. Maybe we'll have a few weeks of winter, after all.

Govmint Peak was ok Sunday with some pretty sweet snow. I saw no marmot shadows, no man shadows, and no other shadows at all - pretty much greybird. Maybe we'll have a few weeks of winter, after all.