Short post tonight, as I will not be around this week. I'm flying to Deadhorse Sunday morning, and will be driving south in segments over the course of the week down to Delta Junction by Friday, before heading back up to Fairbanks and catching a late flight back to Anchor-town that night. This is a work trip, but it should be a blast and I'm looking forward to it.

Big news of the weekend was climbing Silvertip Peak on Friday. Nathan and I started from Turnagain and climbed up and over its summit, skiing down the Block Creek headwall, and exiting out Manitoba. The 9+ mile traverse took just over 6.5 hours. We had a perfect vis window for the run. Snow was excellent. Sorry, not enough time to post pics, but I will attach a map and a linked video. The map is off, and shows a lap on Silvertip's east face and a lap on Manitoba's north side. Not enough time to draw a new one. Both those were extras were no-gos. The east face was pretty wind-loaded and not appealing. We were glad to get the summit at all, the winds were nasty and the final 500 feet were fierce. Silvertip did not want us. Manitoba run had to be bagged as we had to hitch back to the car and did not want to risk doing that in the dark for...Manitoba, ya. 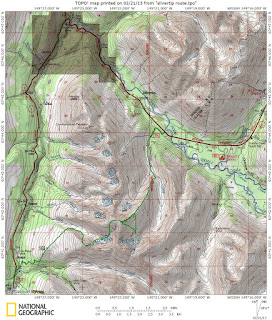 Saturday Nathan, Mike, Liz, Paul and I all skied the hell out of the NeCo gullies. Off-and-on storming through the day with a shot of pure bluebird on one run, but great fun, great crew, and a lot of vert.