As noted in my last post (LINK), two weekends ago Nathan and I skied off Silvertip Peak into the Block Creek drainage.
Silvertip Peak is the center piece of the road-accessible skiing of the northeastern Kenai Peninsula, and divides Turnagain and Summit passes. At just over 5,000 FSL, Silvertip is the highest point on what is, like many other peaks, a multi-pronged massif consisting of numerous smaller peaks and sub drainages. The massif includes areas like the mellow slopes of Manitoba, as well as the much steeper northerly facing Twin Peaks. The Seward Highway wraps around the massif’s north and westerly flanks, and skiers and riders have a view of this mountain from almost anywhere in Turnagain or Summit pass.
Depending on one’s view point, Silvertip can look substantially different. From Turngain, most skiers will note Silvertip’s average-grade easterly slope that so often catches the bright morning light. Farther south, from Lips or the two Petes, the mountain sports a vertical-looking north side.
Viewed Summit Pass, the mountain is yet again wholly different, forming the high-rising backdrop to the expansive and planar Manitoba. From this view, Silvertip is a low-angle, south-facing summit field that suddenly drops through couloirs and cliff bands into the headwaters of Block and Wilson creeks. While the upper portion looks as gentle as Manitoba, all the approaching ridgelines are knife edged and corniced.
The inspiration for this tour was far less dramatic than the previous week’s tour on the south side of Pastoral. While I’ve looked at the Block Creek headwall many times over, and the Turnagain to Summit traverse has always been something I’d wanted to do, I can’t say I had any burning desire to knock it off the list.
The inspiration for skiing down the Block creek headwall came really from my solo day on Colorado a few days prior.
I think, at last, I’m beginning to have lived here long enough to derive some level of perspective from winter to winter on the way the mountains fill in, or don’t. Obviously, not every winter is the same, and with that, sometimes lines don’t fill in the same way either.
For whatever reason, Block Creek caught my eye on President’s Day, and I snapped a few photos. Later, back at home, I zoomed in, and saw that the various couloirs that feed from Silvertip’s summit field into Block Creek looked really good.
I mean, really good; better than usual it seemed.
I thought about it through the week, scouted the Internets for some additional beta, and as it became apparent the weather window might open on Friday, rallied Nathan to the cause.
We started our day with some technical skinning when I missed the road that heads into Silvertip Creek, and found ourselves in a spruce forest on big pillows that might have been fun if we were riding. We re-oriented and easily found the big, wide road that lead us into the Silvertip Creek Valley.
Our ascent route was a long and gradual ridge that was just that: long and gradual.

Nathan had some issues with his touring mount on his 1-year-old Karakoram’s about mid way up and we were forced to do some rigging, but until we hit neared 4,000 FSL the climb was for the most part uneventful.
Then we started getting nailed by the wind. Like the previous week, temps were low, and the ceiling still had not cleared so our objective remained elusive.
From time to time the clouds would thin enough to reveal the silhouette of a fierce looking face ahead.
It began to feel like the mountain had sensed our presence and was telling us to go back.
Somewhere along the way we passed what I can only call a small crevasse, despite the fact that we were on a ridge, albeit a broad one. It was an absurd sight.
The ridge rounded a corner and began the final approach to the summit, which now looked over hung and inaccessible due to the build up of massive bulges of rime.

To our left was east face of Silvertip. Average in grade, a west wind was loading it with sugar snow. The ridge we climbed showed evidence of an old skin track that had been scoured so it was now higher than the slabby snow we climbed on. To the right, was a short slope that ended in vertical drop down the mounain’s northerly side. Said short slope became shorter and shorter, as we climbed further up the narrowing and increasingly tractionless ridge.
Poking out onto the east face would have reduced the exposure a hair, but we didn’t trust the snow.
With about 500 feet to go, we couldn’t skin any further, and halted on the tiniest of flat spots to transition top boot packing.
The summit was out of sight, and I began to wonder if you would make it over the rimey ridge ahead.
Boards on the packs, helmets on, Nathan lead the charge.

Progress quickly ticked upward, and through the overhanging bulges of rime and cliffs to our right were intimidating, the summit seemed again in reach, though still out of sight.
Boot packing is mindless, but the angle backed off, and the next thing I knew, the mellow summit field was unfolding in front of us through the hazy clouds.
The ridge left us maybe 50 feet below the true summit field, and we waded through the powder.
The sight was amazing.
Summit Pass was sprawled out below us like I’ve never seen it, the beautiful sunlit summit field at our feet, and between the two, a precipitous drop into Block Creek.
I didn’t expect the low-angle summit field to ski that well on a board, but was pleasantly surprised to feel the Jones take off down the skyline on deep and fast snow. As I leveled with our selected entry point I pointed it down.
It was the kind of 10-second experience that will last a lifetime, I think: the snow was exceptional, golden in the afternoon sun, and flumed off the edges with each turn; in front of me, I could see all off Summit Pass, but at the same time, the horizon directly in front of me abruptly ended.

We regrouped at the top of the couloir. As I entered a lot of heavy slough began to move. I skied about 100 feet below the entry point to a raised spine and stopped, letting the slough run most the way to the valley floor, before taking back off. The line skied incredibly well.

After so much lateral, the game plan for Saturday was obviously vertical. With overcast skies Nathan, Liz, Paul, Mike and I headed to NeCo. In four runs we had light snow, blue bird, high stratus gray bird, and nuking for the exit. We skied one lap in the trees and then moved through the gullies.
﻿ 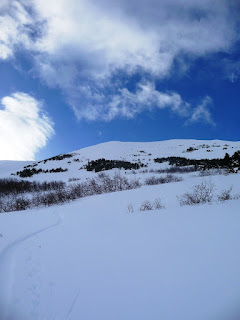