Since I moved to the AK, the first two weekends in March have always been dedicated to skate skiing events. The first Sunday in March is the Tour of Anchorage, and the second Saturday is the Kachemak Nordic Marathon.
I've done the former every year since 2009, and the latter twice officially, and one year a day late, or maybe a week late, unofficially, whatever. This year, however, was a no-go for both for me. Sometime back in early February I sprained my left MCL from over-doing it on the skate skis. I tried to ignore the pain at first as it was light and went away within 24 hours, but then one morning, even walking I couldn't make right turns without hurt and even sleeping tweaked it. I had to face the music and lay off.
The cause was over use and not skating was the easiest remedy.
Classic, and thankfully, backcountry, have not been a problem.
Truthfully, I wasn't too upset about missing out on the Tour this year. It's a fun event, but it was a lot more fun when I didn't live in Anchorage. I was already skiing the equivalent of the Tour once a week as it was (hence, the over doing it...) The upper half of the Tour's route is my home turf, and this year, I also started skiing at Kincaid one night a week too just to mix it up.
Mostly, I just miss going out and skating for hours on end, and am especially bummed I'm missing the golden season for skating with the daylight back and comfy temps. I'll miss the Kachemak Nordic Marathon for sure. That is a spectacular course and I can't say enough about it. Here's to next year.
I was sort of hoping this past Saturday would be a light day in the mountains with a leisurely start since I didn't get back into Anchorage until pretty late Friday night following the week-long road trip, but the weather window looked like it was only going to be open Saturday, and Turnagain had picked up a lot of snow during the week.
Nathan wanted to ski Kickstep, so we planned for a 730 launch out of town.
Ouch.
When Liz, Colin, and I grouped up at the edge of town though, we learned Nathan had contracted a nasty sickness and couldn't make it.
Double ouch.
We rolled south and headed to the Tin Can Lot anyway.
We made good time up "Liability Mountain" as Nathan has referred to it, and were rewarded with a spectacular view from the top of Tin Can Proper.
We watched some bro-brahs ski spines in the Library, and were thrilled to see big plumes of snow coming from their turns.
Our run was far less aggressive, but plenty long. High clouds in the morning had helped to block the sun, but the lower third of the run had a stiff sun crust already.
The thought of skiing more south facing was not appealing, and we were hesitant to head for Kickstep since Nathan was our main source of intel on the route specifically, the descent route down the face, which is lined with high-consequence cliffs. We decided to head up valley and take a look anyway.

As we closed in on a decision point, our confidence in Kickstep drained. Aside from not being familiar with the descent route(s), we began to wonder how good it would be with its southerly aspect.
Meanwhile, just across the valley from Kickstep was long escalator ridge that held promising-looking north and westerly facing terrain.
There is more country in the headwaters of Tin Can and Lyon Creek than I think you can ski in a lifetime. This was going to turn into a high vertical and lateral day.


We made one lap down the westerly side of the ridge in bright sun, and then steered down the backed-off slope of the end of Center Ridge to the valley floor of Lyon Creek for the first run, and down the northerly side to the floor of Tin Can Creek Valley for the  last run.

With a storm rolling in I met up with Dan S. in Summit Pass on Sunday and headed to Tri Tip.
We actually had descent vis on the first lap and I began to wonder if maybe the storm would be a bust. No such luck, by the time we climbed back up we were cloaked in clouds. 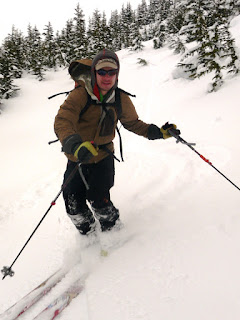 After a second lap on the Tip, we decided to tour over to Tenderfoot to ski its north side. Tenderfoot Creek was a party.
We found similar conditions on Tenderfoot's north side, and did two laps there before heading out for a good day even in the gray light.