Southcentral Alaska has had a record-setting September...as in, it's November and it's still going.
The oft wet and mild month continued its march right through October, and may very well butt into November.

Something happened to me during our exceptionally pleasant summer. I remembered that, I like summer. I like dry trails. I like not (constantly) checking analyzing the weather. I even like the heat (BLASPHEMY!).
I got used to it.
So as summer turned into fall, and it became harder and harder to get my fix on two-wheels, the transition was harder than it has ever been before.
After a soggy and muddy Labor Day weekend ride on the Kenai with Adam, I decided to work the actual holiday and combine it with a flex day the following weekend and skip town.
Initially, Whitehorse seemed like a good place to head, and I think next year there's a good chance that's where I'll be for the fall holiday (the last three falls have been drenchers here in Southcentral...I got the message).
Of course, given my lack of planning and the fact that it wasn't a holiday, I couldn't rally any company for the long weekend, so it looked to be a solo mission.
Simultaneously, my mom and Steve were most the way through a cross-country drive from Vermont to Oxnard, Ca to my mom's new house in sunny SoCal.
When I looked at airfare to LAX, it turned out the travel time by jet across the continent was slightly less than the drive to Whitehorse, and the trip costs comparable.
I got my plane tickets.

I had actually already planned to visit my mom in her new digs twice this autumn/early-winter, the September sanity-saving trip was a bonus.


My mom's new home is pretty awesome. Near the coast, it's cool and breezy, despite the sometimes warm temps found farther inland. Located on a mostly quiet street, the house is full of big sky lights and her small back yard features fruit and avocado trees. I arrived only a few days after she did on my first visit, and her furniture was still a couple weeks behind her, so meals were served Japanese style, and step stools and lawn chairs were utilized for seating.
Another huge perk, she lives maybe a 25 minute drive from the Sycamore Canyon trail head in Point Mugu State Park.
Narva and I rode here when I visited him in 2009, so I had a brief recollection of the trails as it was.


The first ride was a butt-kicker. The heat, and a wrong turn up the aptly named Hell Hill left me shivering on a ridge line in triple-digit temperatures. That means I'm hypothermic, right?
I used the rest of the day to ride mellow and acclimate.


After trial by heat stroke I dialed in the trails, and put together a really fun set of loops the following day. 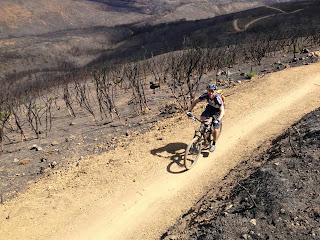 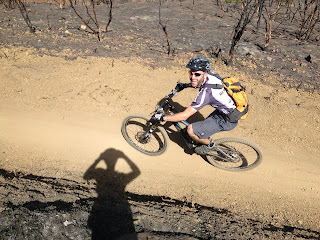 Also a big perk of going down to SoCal, is getting to hang out and ride with Narva.

I made my second visit in late October. Temps were much cooler, and peaked in maybe the low to mid-seventies in most places I was riding.


Even though temps were a bit more moderate, I learned my lesson, and started my trip with a break-in ride, before diving in.
Riding in SoCal twisted my brain a little bit. First, it doesn't take much to find trails more technical than what I ride here in AK, so finding trails where there is one line, and you take it or don't make it is welcome. Still, I always argue that here in the north, we win on the epic, scenic, and remoteness factor.
I think that's still mostly true, but the riding I did on trip 2 really gave AK riding a run.
On day two I stitched together a 40-mile ride that sported some 5,000+ feet of climbing, starting from the Sycamore Canyon trail head to the Los Robles Trail in Thousand Oaks, bringing in various loops on the two trail systems.

Day 3, I headed to Ojai to do a ride with Narva on Nordhoff Ridge and the Gridley Trail. 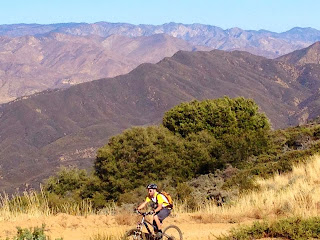 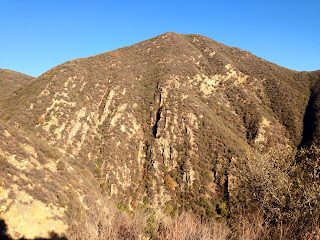 In the 20-some odd mile point-to-point ride, we saw maybe a combined half-dozen people within a mile of each trail head, and only three other people (riders) beyond that. From one side of the ridge we had pleasant views into the Ojai Valley, and to the other, the rugged Los Padres National Forest.
Gridley Trail was a gem, a hugely long descent with some sketchy sections and drop dead gorgeous views.


Great resource if you're mountain biking in the area: http://venturacountytrails.org/TrailMaps/MapsHome.html