The month of March has come and gone. Normally the highlight of the long ski season, this year, it featured not only the deepest, but the most consistent conditions. That being said, in general, conditions were passable, but meager in comparison to what we know.
Instead of doing a bunch of posts, here's the bulk of the month, sans Narva's visit, in one, mostly photo, conglomerate post.

Nathan, Cody, and I  started our day in Stair Step on some 16" of fresh with the consistency of cotton fluff. Unfortunately it was sitting on a base that hadn't seen a refresh in over a month and a half, and had been subject to two significant melt events. Basically, it was a lot of dust on a crust; and Mr. Weend showed up and helped to unevenly distribute it.
We learned pretty quick that the terrain we often seek out in the Stair Step and Delia area was not ideal, and that broad slopes were the better bet.
﻿
The ankle strap on my Karakoram Split30 snapped off at the inside strap as I was unbuckling after our second lap in Delia and third lap for the day. I was pretty ticked off, but could not help but laugh at the fact that this was the second time my Karakorams failed in Delia. This was also the Karakorams last tour.
Also, I came up with a new slogan for Voile ski straps, since Nathan and I have made extensive use of them while we used Karakoram: "Voile ski straps: You can't ride Karakoram without them." 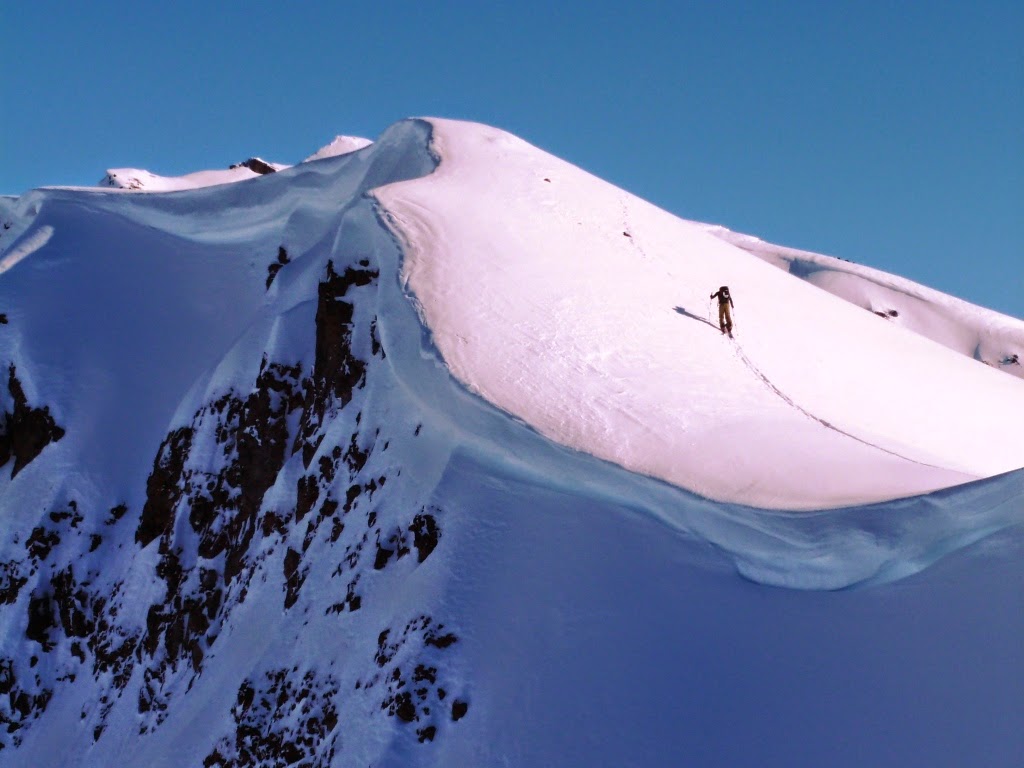 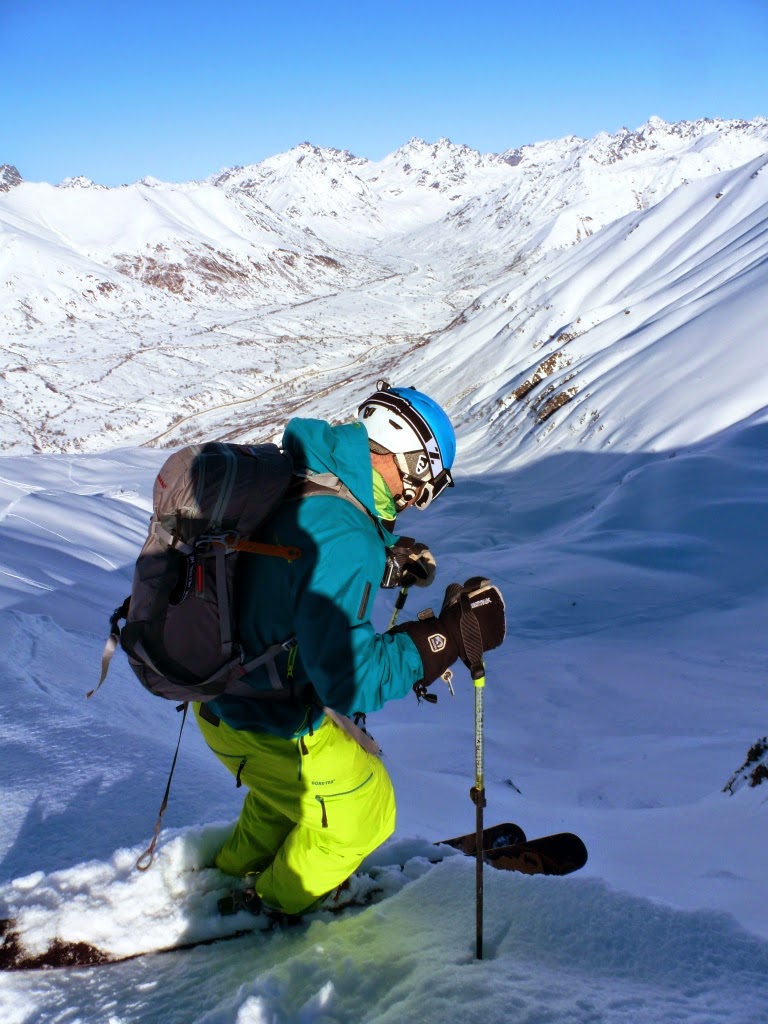 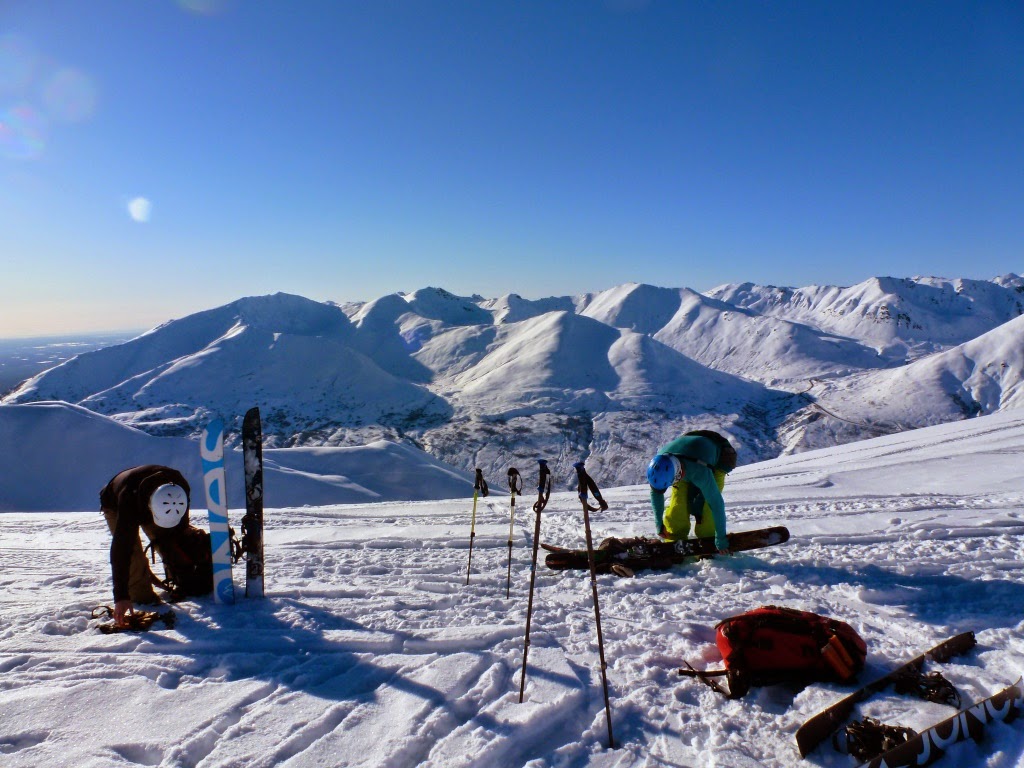 After the mid-March refresh, Turnagain was skiing well, and the west face of Pyramid seemed like a good call, having slid to the ground already earlier this season. I called Mike Kelly, and he suggested we use machines to access.
I had no objections.
Colleen, Mike and I buzzed up the snowmachine uptrack on the motorized west side of Turngain in a hurry. I had a good laugh at how quick it was to power up the slope on the well broken trail, compared to the normal tour I've done when the area is closed to machines. Both Colleen and Mike are competent sled riders, and though none of us had been to Pyramid before, we cruised the sometimes rocky ridge, riding right to the summit, with one machine staged about midway in a nearby drainage. 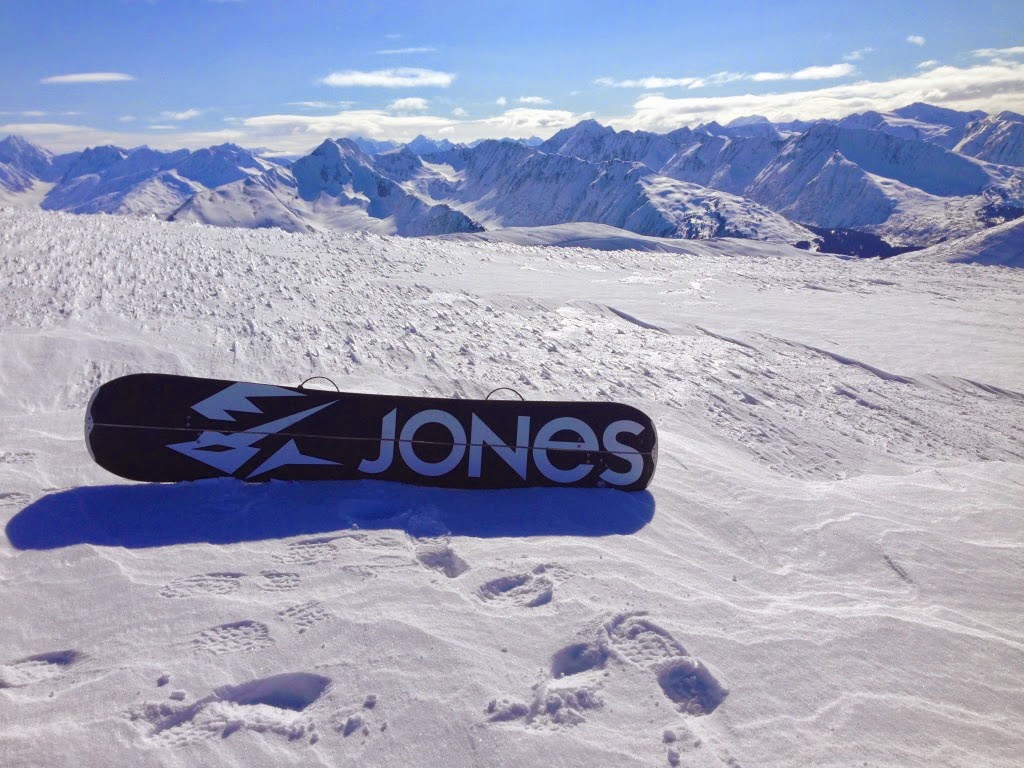 The west face had some big cornices, but Mike kicked steps down the northwest corner of the peak and scoped out an entry. It was a bit aggressive, especially with the steep, icy north face falling off on the other side. The upper slope skied marginally, with some wind-impacted breakable that gradually transitioned into more consistent powder. Looking back at the slope from the bottom, it didn't really matter!

The face reminded both Mike and I of Spiritwalker. Though not as steep, or as long since we did not chase it all of the way to Seattle Creek, it was still expansive and long.
The beauty of using machines for this trip came out as we began to skin back up to Mike's staged machines. At mid elevations, the snow was awesome, boot-top+ and consistent. If we had toured all the way in, our best freshies would have been on the uphill, but with machines, we were able to ski the big face, and then get several laps in on the ultra playful bowls nearby before calling it a day. 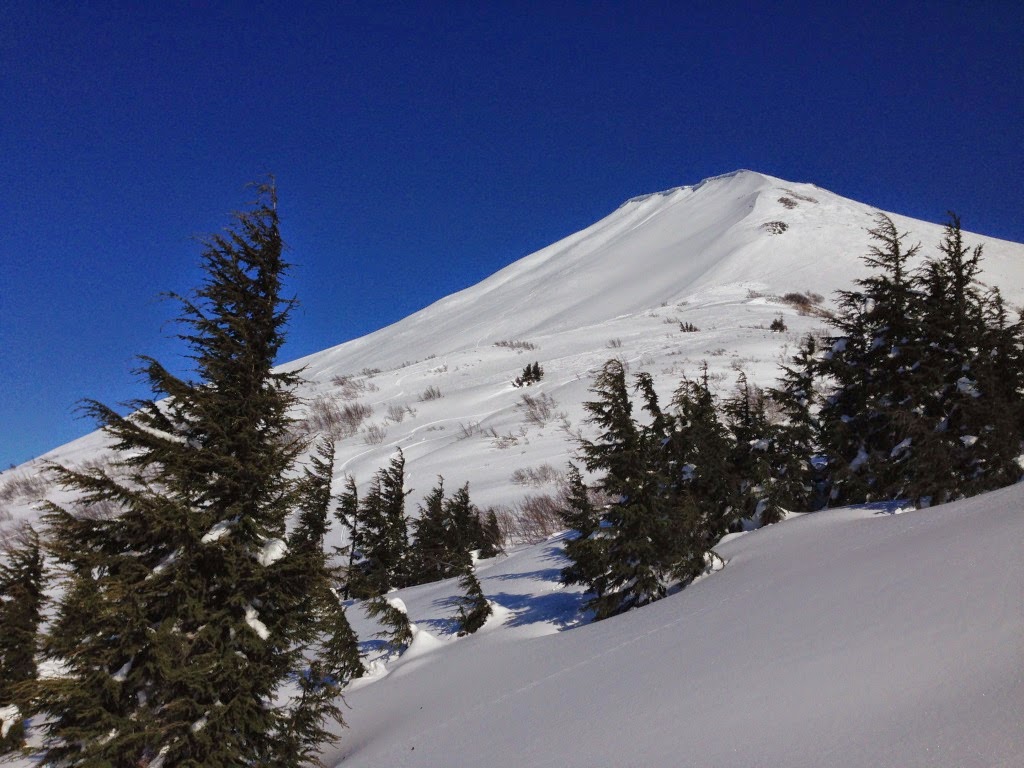 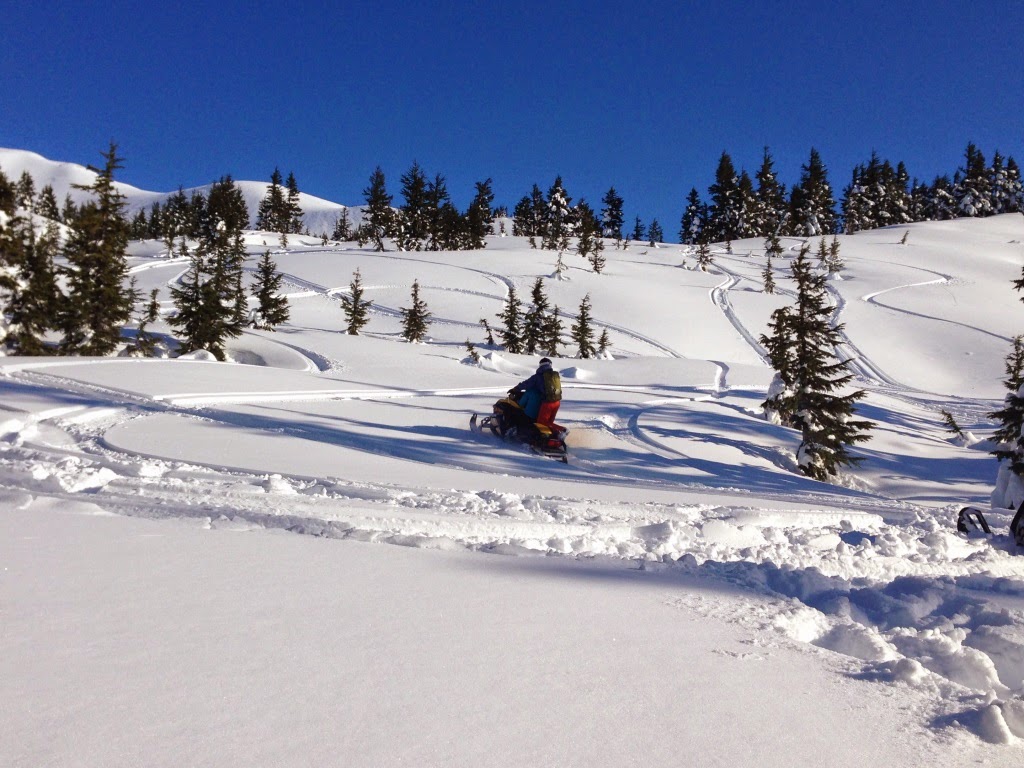 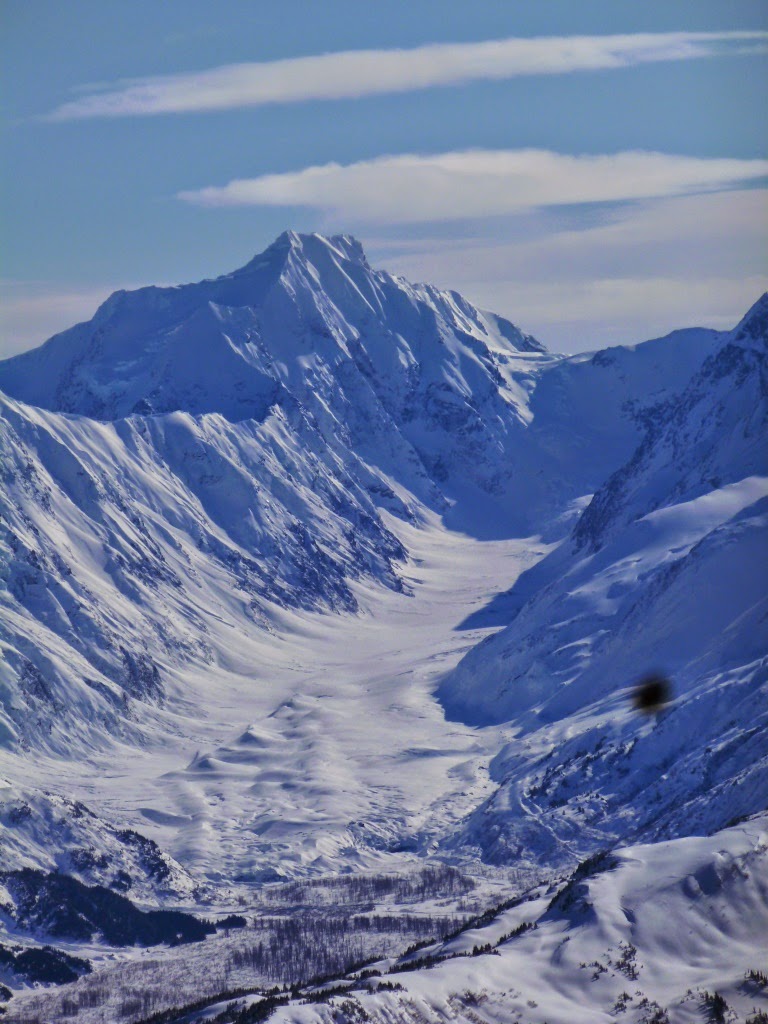 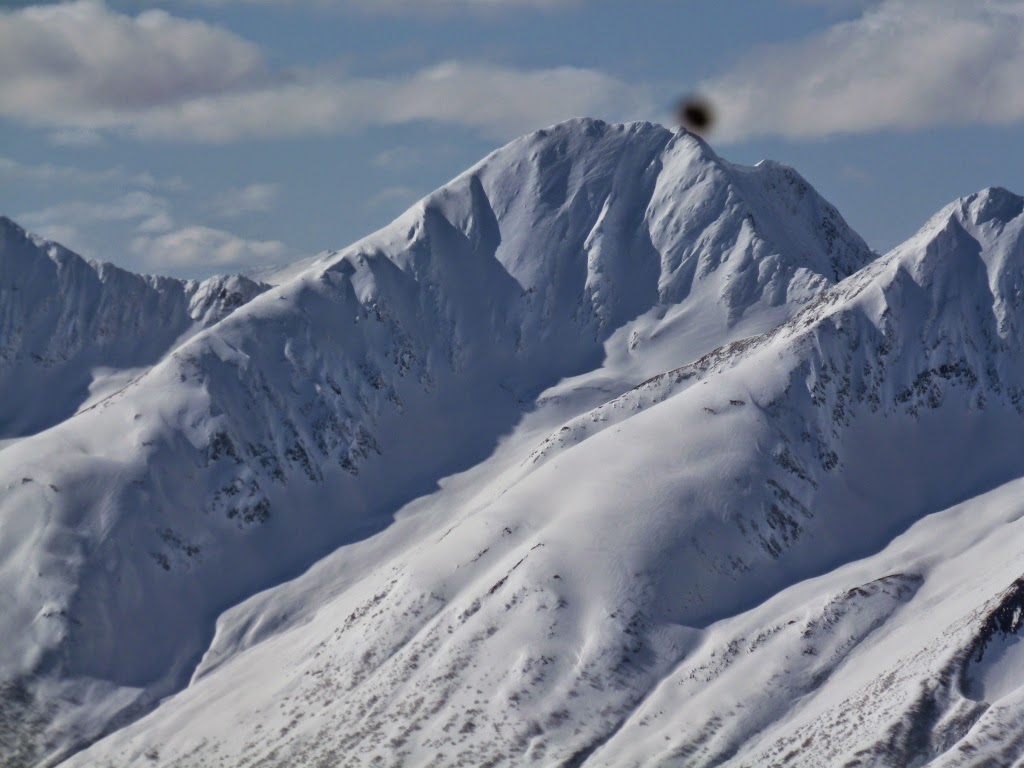 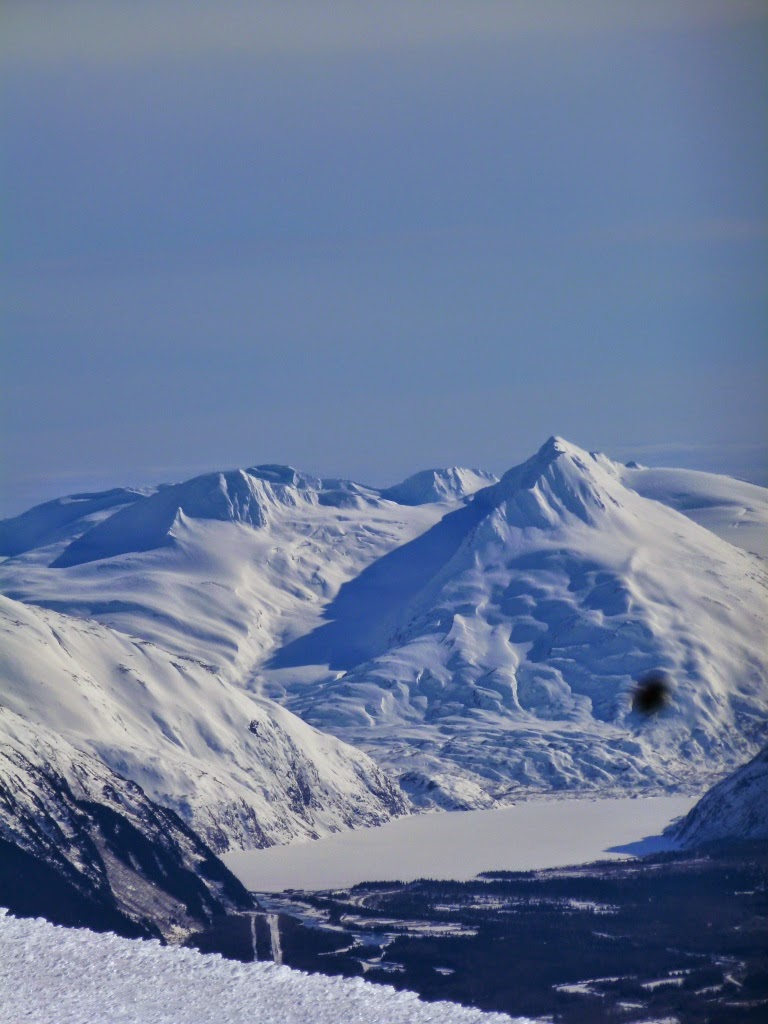 On the way out, climbing out of the last bowl before we were to begin the descent down the uptrack, Mike's sled had a major mechanical. He was able to limp it out the rest of the way, but it made for an interesting and icy dusk descent back to the highway. We were glad the machine decided to give out when and where it did though. One bowl back and we would have had to leave it behind to a later tow and possibly a late night of skiing or shuttling.

Nathan, Cody, Lizzy and I headed to Pastoral. After several days of mid-week sun, there were a lot of people out and about, and I saw more people on Pastoral than I have ever seen before: 12. I guess in comparison to other places, sharing a mountain the sized of pastoral with 12 people is kind of having it to yourself, but it felt different.
Conditions were pretty marginal, but worthy of a couple laps. We found a bullet proof crust off the summit, and breakable but easily caravable the rest of the way. 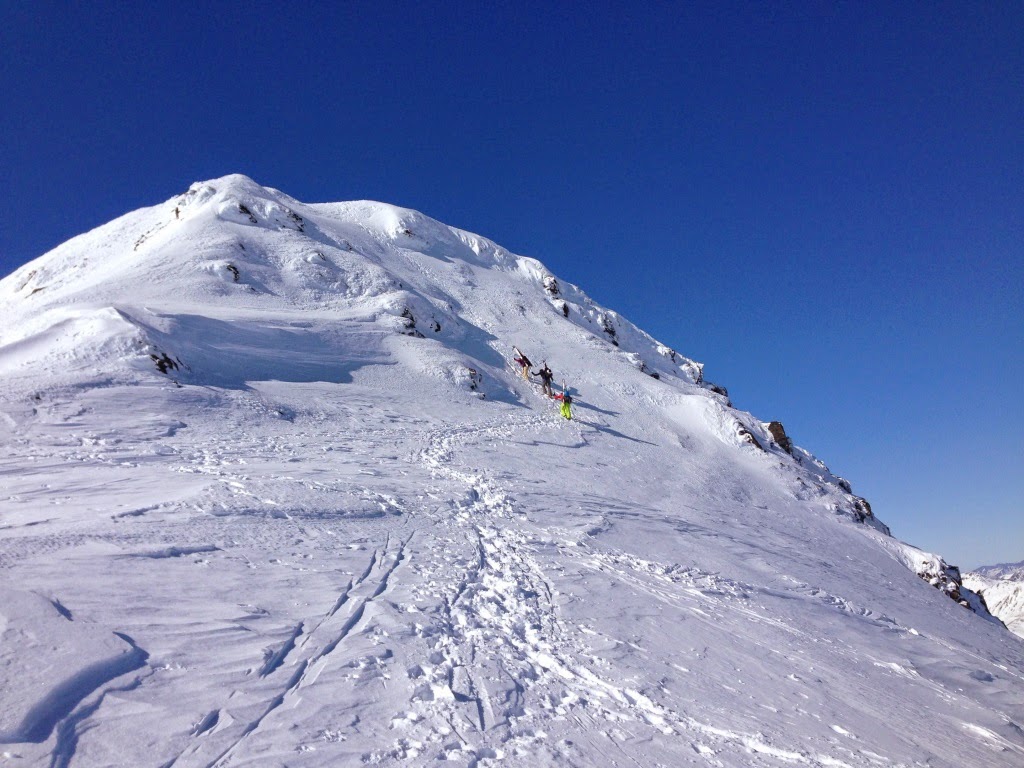 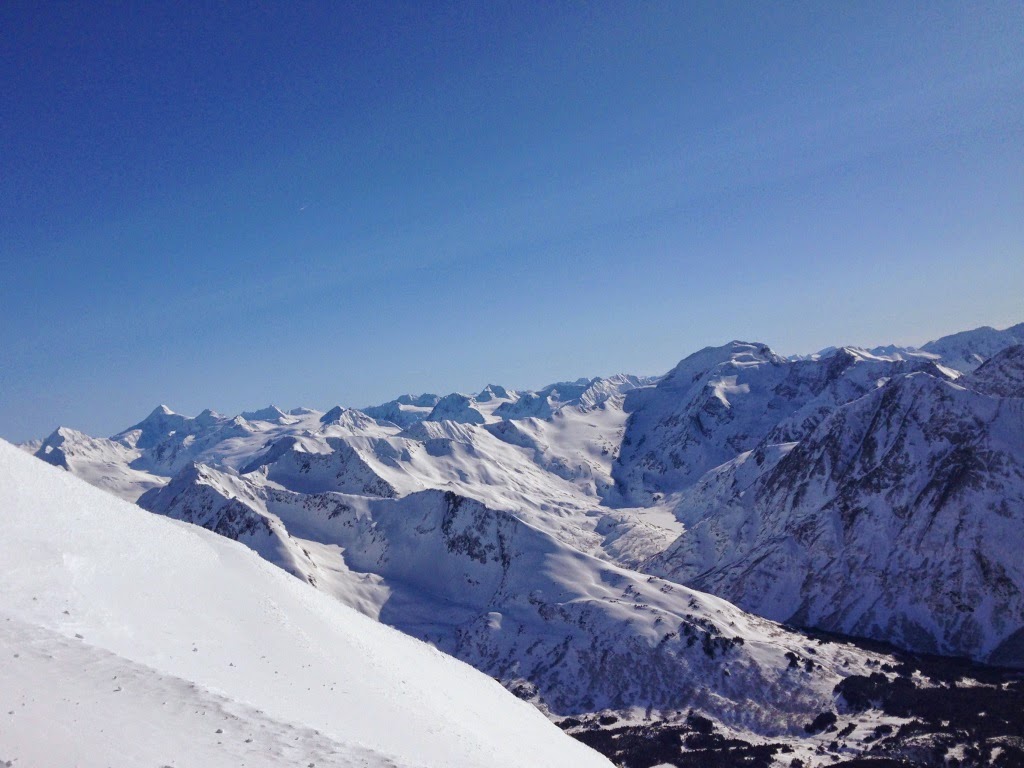 I don't really know what this place is called, I called it Plan B last year, after Lizzy, Colin, and I aborted a summit bid on Kickstep. Basically, it's whatever Center Ridge grows up and turns into. Nathan, Cody, and I headed back here and notched some laps. The higher elevation stuff skied similar to Pyramid, but the mid-elevation was the same boot-top, and south facing chutes were supportable enough to make GS turns in.

Lizzy and I set up a base camp a few miles up the Little Su and did some exploring around Arkose and Souvenir peaks.


Conditions were really variable thanks to Mr. Weend and his dog Mr. Woompf. It was one turn on recycled pow, one on breakable, one of supportable wind slab, and another on February melt crust. We picked an anonymous, sun-cooked couloir. It probably skied more consistently than anything else around: 2 inches of corn on a rock hard base.I would not have been able to boot it without strap on crampons.  If it slid, it was going to go catastrophically. We aborted the climb less than 50 feet from the ridge when I hit very old hang fire. The two inches of corn turned into 16 some odd inches of sun hammered mank that was sitting on a hollow layer above the rock-hard crust. While the amount of hang fire was somewhat insignificant, I knew if it popped, it was going to go, and rip out really fast with high consequence. Honestly, I think it would have held, and it was frustrating to have to drop from so close to the top, but I've also learned that my two closest calls have come on days like this one where I'm skiing extremely variable. I think the fact that every few steps I'm on a different surface with different stability numbs me. I was glad we decided not to push it. 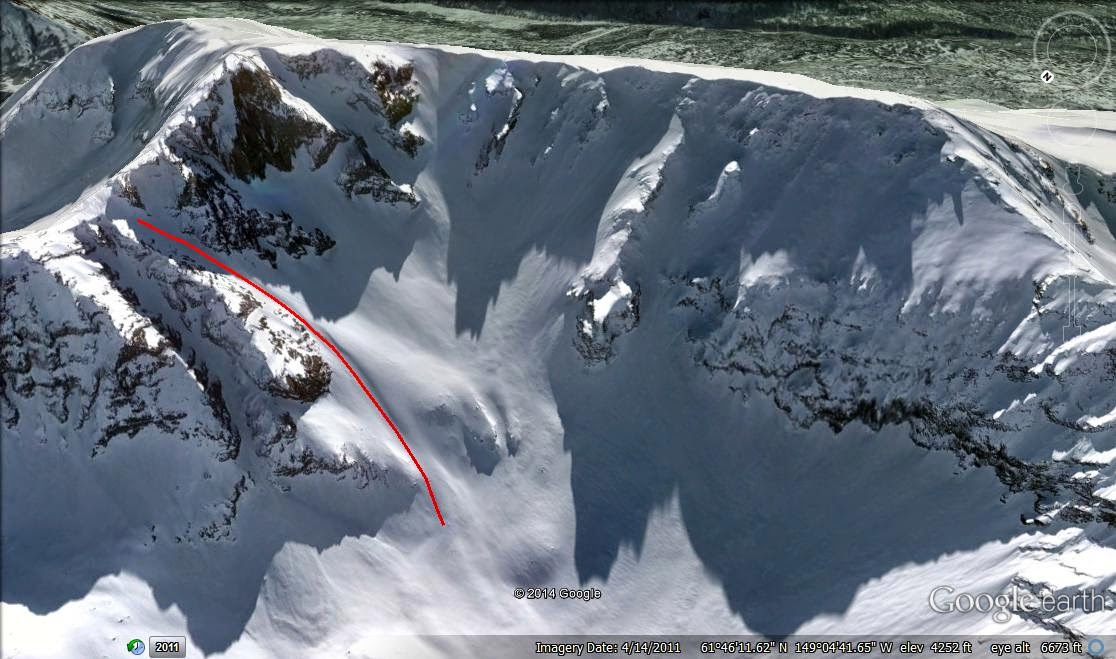 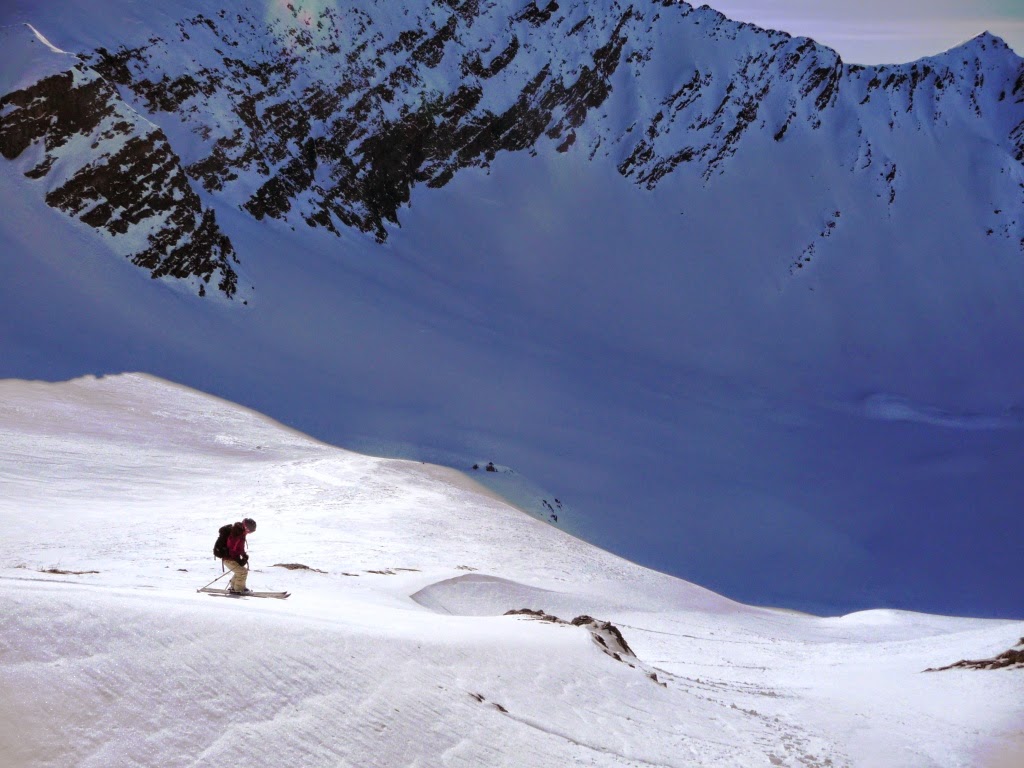 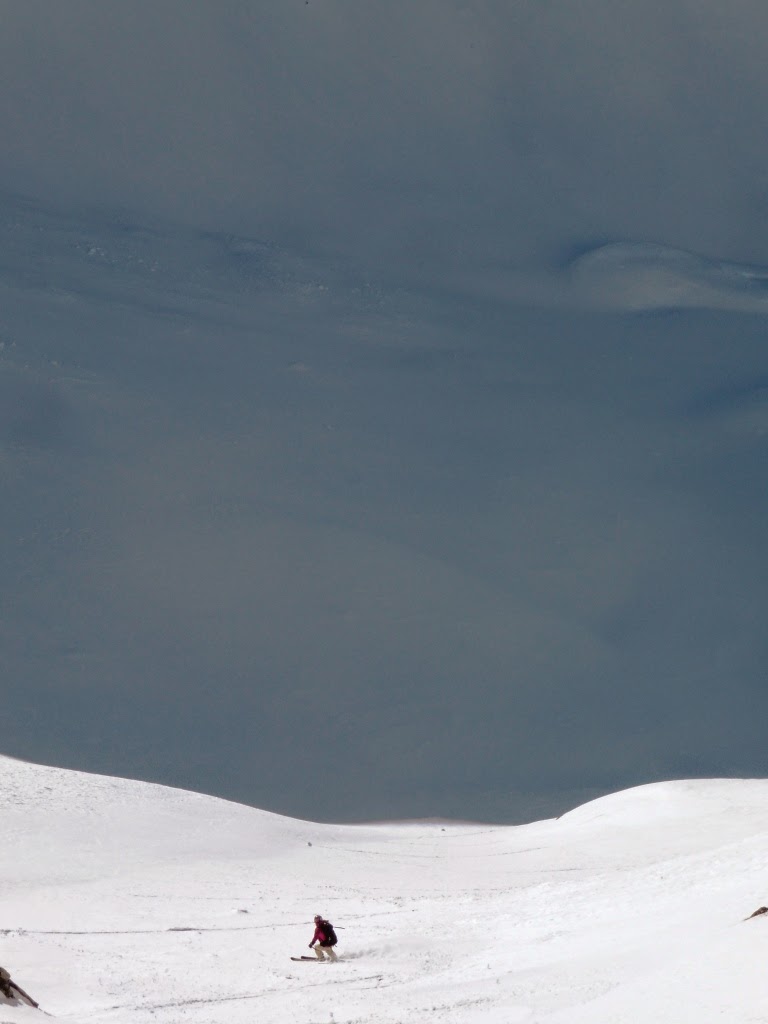 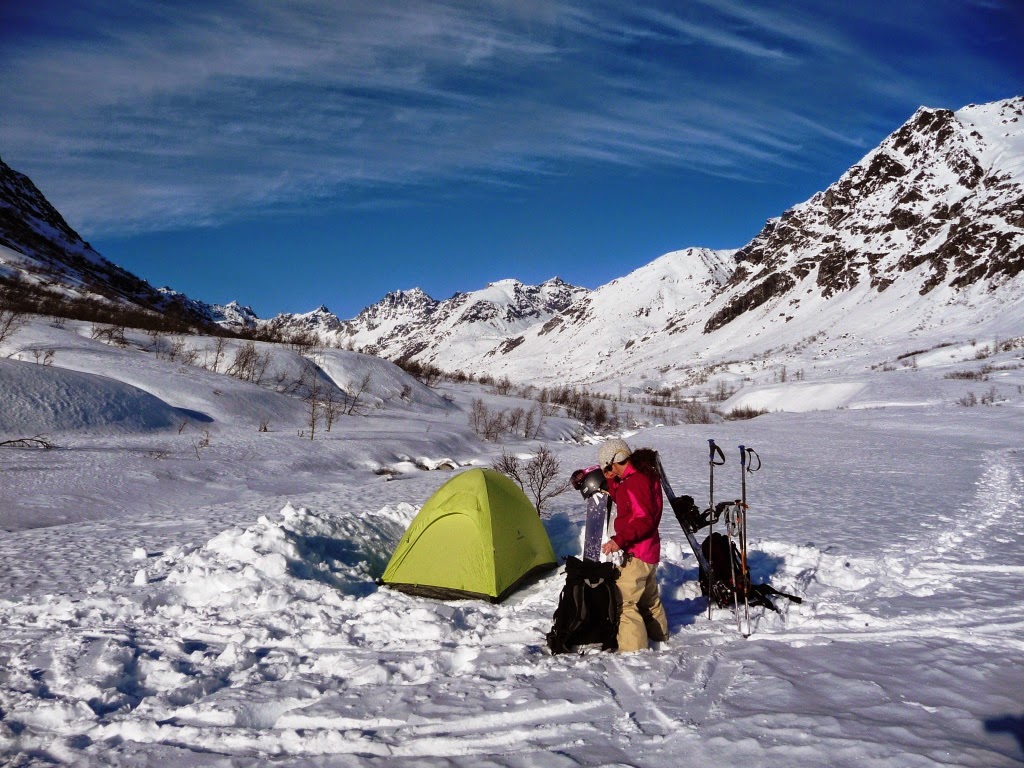 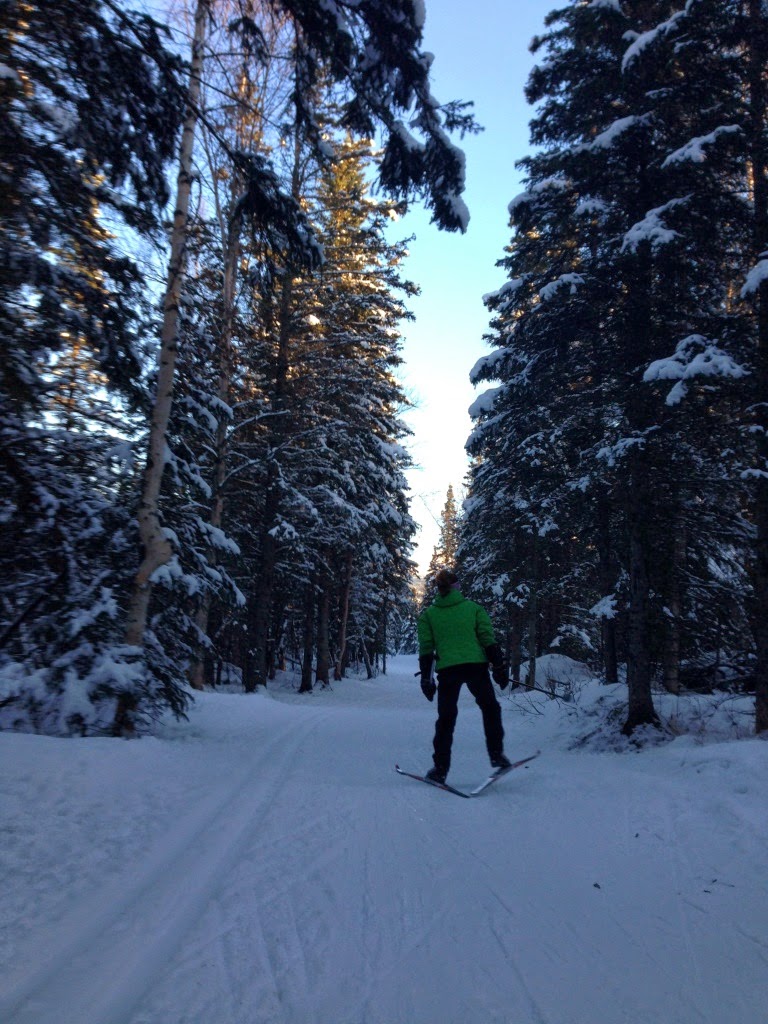 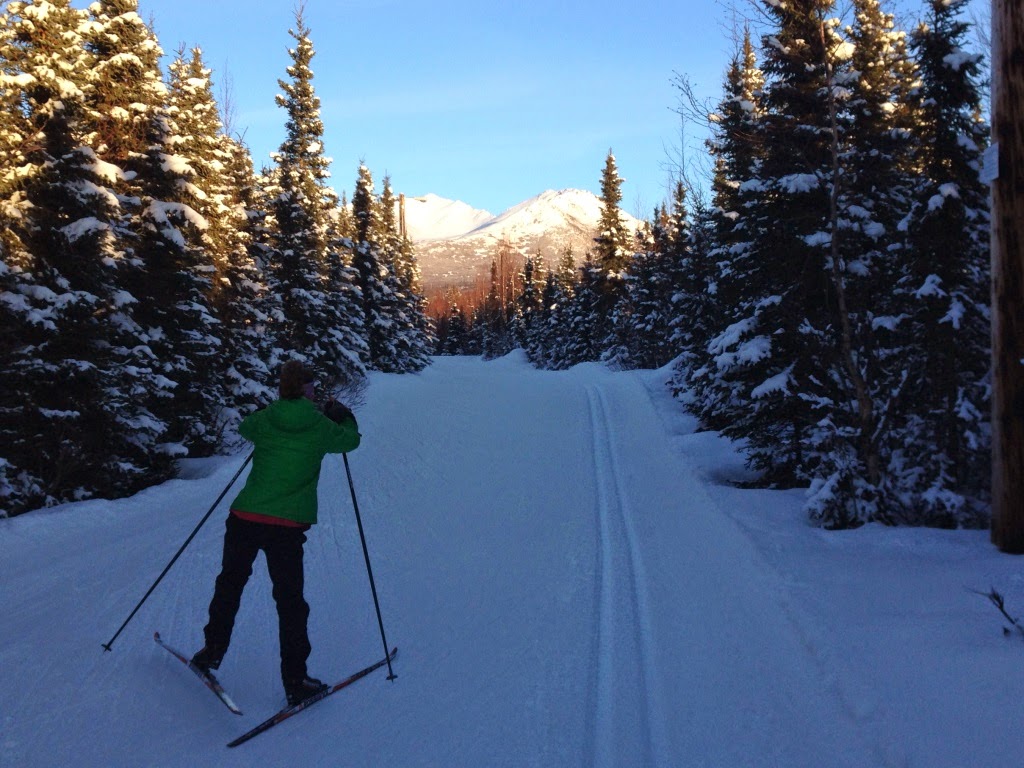