A Week in Valdez

I was in Valdez last week, part for work, part for play.
I drove in on Sunday. It’s 5.5 hours from my house to Valdez, and when the weather is nice and the roads are dry, it’s pretty sweet. The falling rocks of the Glenn between Sutton and Eureka are sketchy, but after that, some good tunes, a book on tape, and endless views of the state’s most stunning mountains, pretty much take care of the rest.
While work was super busy, I did bolt to Thompson Pass on Monday afternoon to get a lap in.
It was the first time I ever skied in “the real TP” alone, and there weren’t too many people out. I spied some tracks on Catchers Mitt (I didn’t know that’s what it was called at the time) that looked like they had avoided the pervasive, variable wind effect, and seemed like a good tour.
On the whole, the run didn’t ski that great. Every turn was different, and ranged from up to a foot of wind-blown powder, to varying density slabs. The good snow was predictably deposited, and all the slab was easily carvable, though, plus, I knew what I was going to get from the skin.
Mostly I was just happy to be skiing after work in Valdez. I’ve been there enough to have had the opportunity numerous times, but I’ve not always had a board with me.
Rain and work kept me in town even after hours after that, so I was glad to have gotten at least one after work run in.

Late Wednesday night, Cody pulled into town.
The next morning we got up and met up with the H2O crew.
When Narva visited in March (pics coming), we did a cat ski with H2O. Actually, Narva did a day and a half.
At the time, I wanted to do a day of mechanized skiing with Narv. Basically, I decided to ski with H2O for a few reasons.
A couple falls ago I went to a talk given by H2O owner Dean Cummings, and for whatever reason, a lot of what Dean said clicked for me
Although there are a lot of operators in the Valdez area (I think we counted over a dozen?), H2O is the only one that is based in Valdez proper, that I'm aware of.
We cat skied with H2O back in March as it dumped. It was early in the season for them, everyone was stoked to be out and to be skiing and the vibe was really positive.
One the mountain, they had their A-game on, even as the wind howled across the ridges.
Even though the day we skied with them was pretty tough (storm skiing), they got us into some fun terrain.
I was impressed as well that a number of H2O’s guides call AK home all year, and a few even live in Valdez all year.
The guided ski industry and fishing industry are incredibly alike. There are a lot of good anglers and a lot of good skiers out there, not all are fit to be guides; when the fishing is good or the snow is deep, anyone can hook you up, it counts more when the goods are hiding; knowledge of local spots, and knowing when and where to go makes all the difference.
Lastly, a bit more unique to skiing, is safety: mountains, machines, and machismo stack up quick and make deadly bed fellows.
Having a handle on all these variables is stressful, but I liked how H20 handled themselves.
That being said, it's not news to anyone familiar with the sport, heli skiing is spendy. I justified the expense this year thanks to a generally crappy winter. Runs that I can say I've been proud of, and days that I can say I didn't constantly feel stressed, have been hard to come by. Since I'm not doing any fly-in trips, a day in a bird with professionals seemed like a worthy expenditure, not to mention it's something I've wanted to do since I moved here.

Our first run demonstrated the sharp contrast between the melt line and where the goods were stacked deep: high. The transition was quick, and went from about a foot of high quality powder to carvable crust in a turn.

H20 has a huge amount of permit space in the Chugach, over a million acres. They generally operate alone, and they have a lot to chose from.

There real treat of the day for me, was skiing with Dean. We had a strong group  in our chopper, two snowboarders from Switzerland, and an older skier from LA who was openly intimidated to be skiing with 4 young guns, but showed he could step up.
Listening to Dean point out lines across valley and on nearby peaks, direct the pilot to drop in on areas to check out popped slabs and overhanging cornices, and just generally spout off about how much he loves those mountains, was fantastic. Better yet, our group, of the three that were flying that day, got to open every run, and never skied over anyone else's tracks. 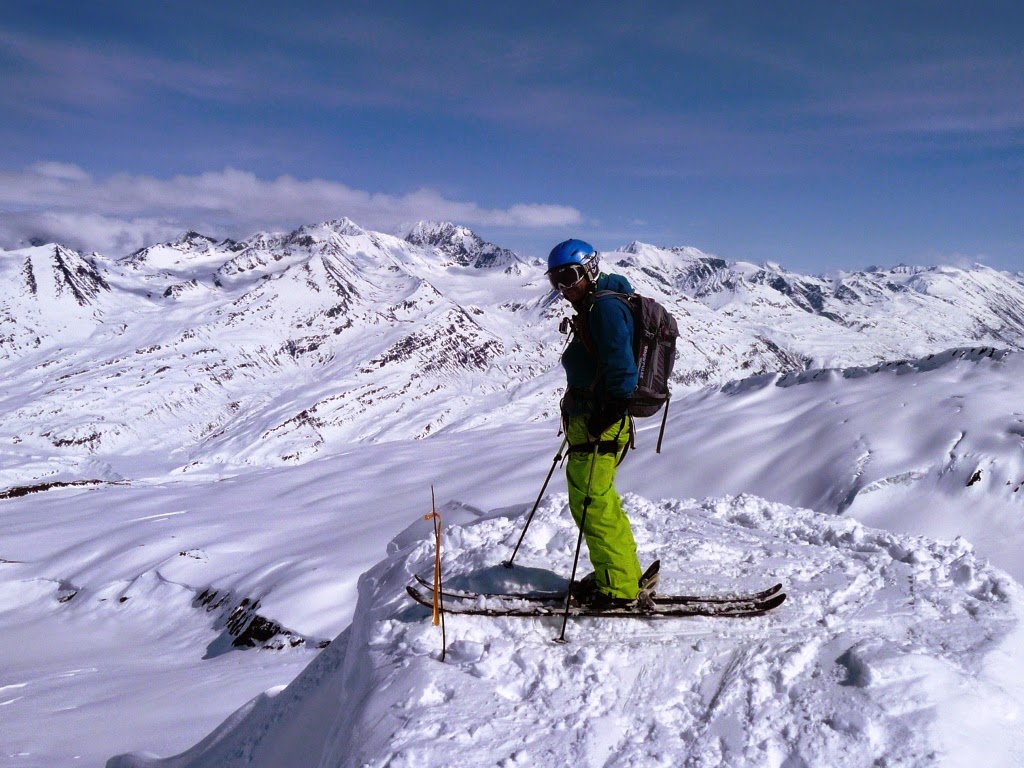 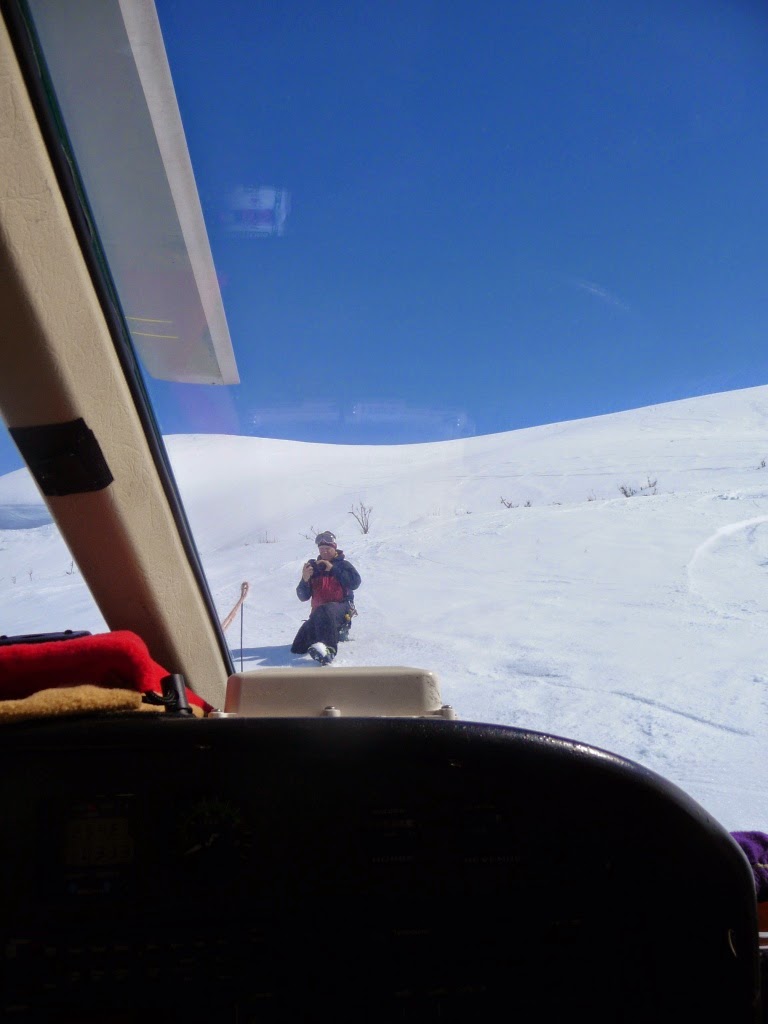 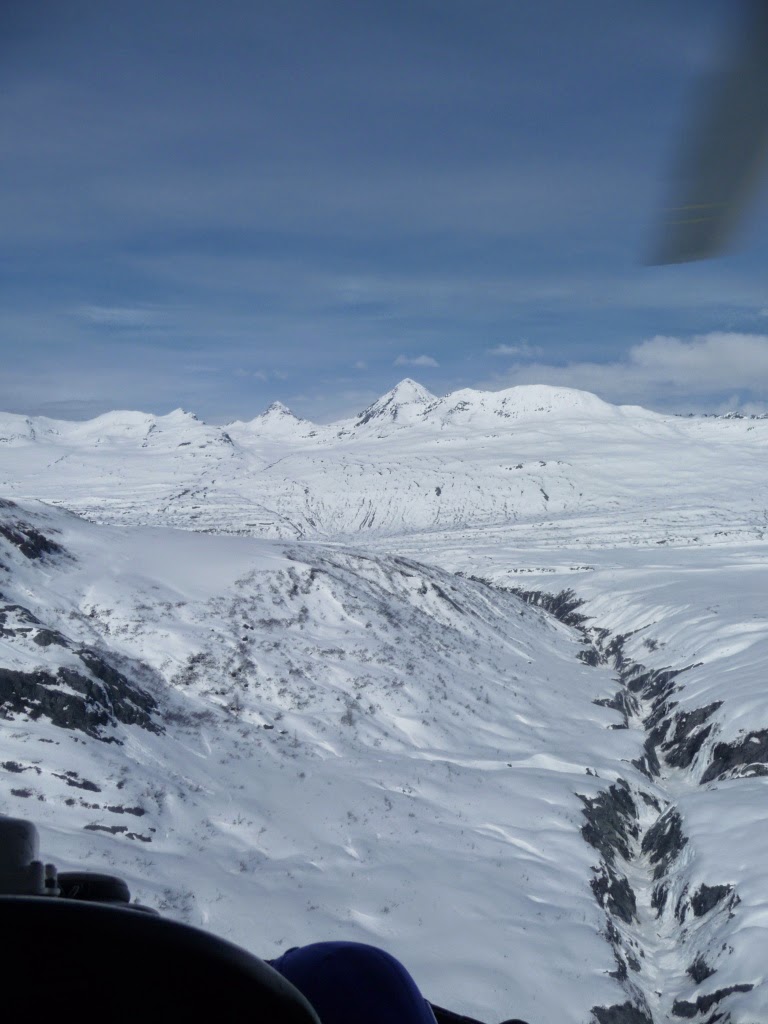 The only bummer about the day: it had to end. We were efficient, and clocked out our vert by 2:30.
I guess we could have gone to the bar and drank away the rest of a beautiful day, but instead we got our gear together, drove up to the pass, and did a long, sun-soaked run.

The snow at the highway elevation was corn, and higher up it was about an inch of warm, carvable, perfect for opening up and making big GS turns on. We skied between Gully One and Snatch. We got chastised a bit in the parking lot for having a sled in the truck but skinning, but then, we didn't mention that we'd been skiing from a heli all morning either... 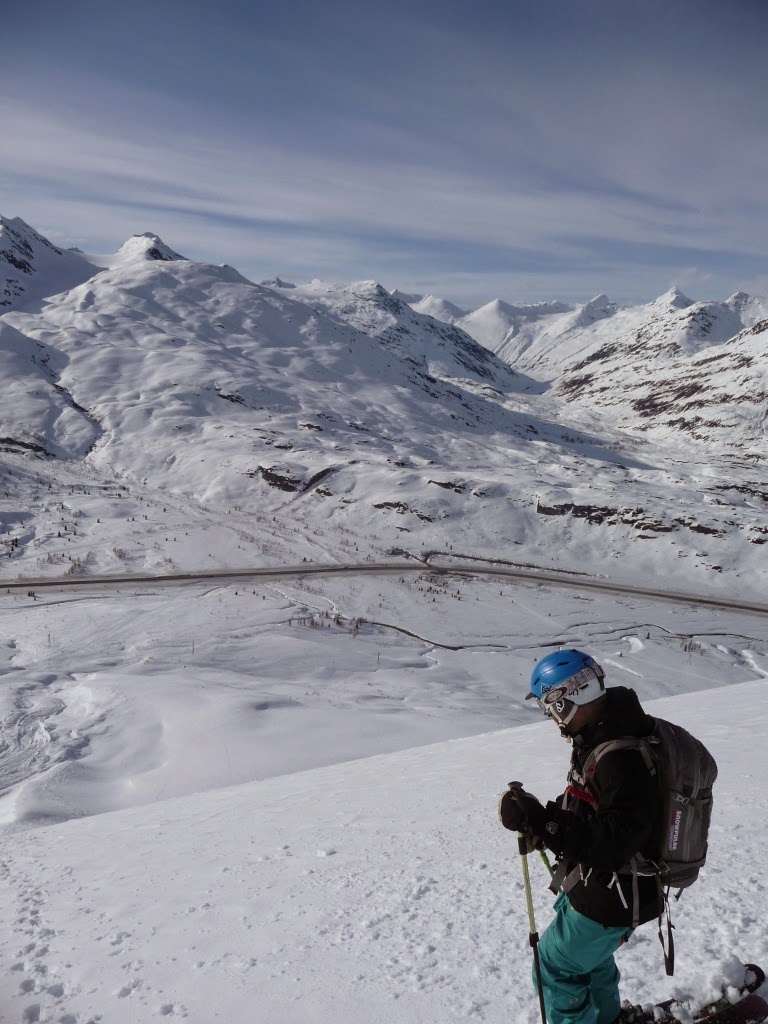 The next day dawned gray and rainy in town, with snow and rain falling in the pass.
We grouped up with Nick and Crystal of H20, and two of their clients, Gene of N.C. and Kevin of Coloardo, who were doing a mellow down day tour.
Nick gave Cody a really comprehensive tutorial on sled skiing, two-upping, and towing. We both learned a lot from Nick.
Because it was snowing pretty good, we used the sled to shuttle the group about 800 feet up from the road, and toured into Gully One from there. 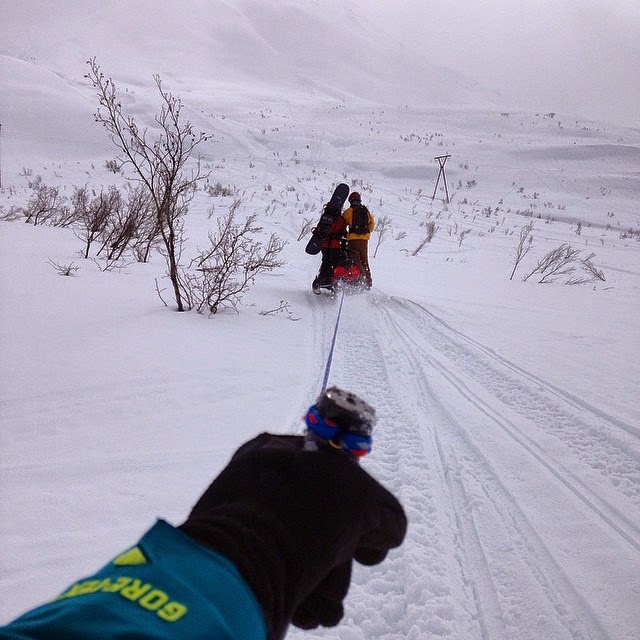 The snow intensified as we climbed, but Nick and Crystal lead us around to a ramp that got us to the top of a sweet run.

Pure luck intervened while we transitioned, and the snow let up, opening into a surprise sucker hole.
We excitedly clicked in and took advantage of the light. 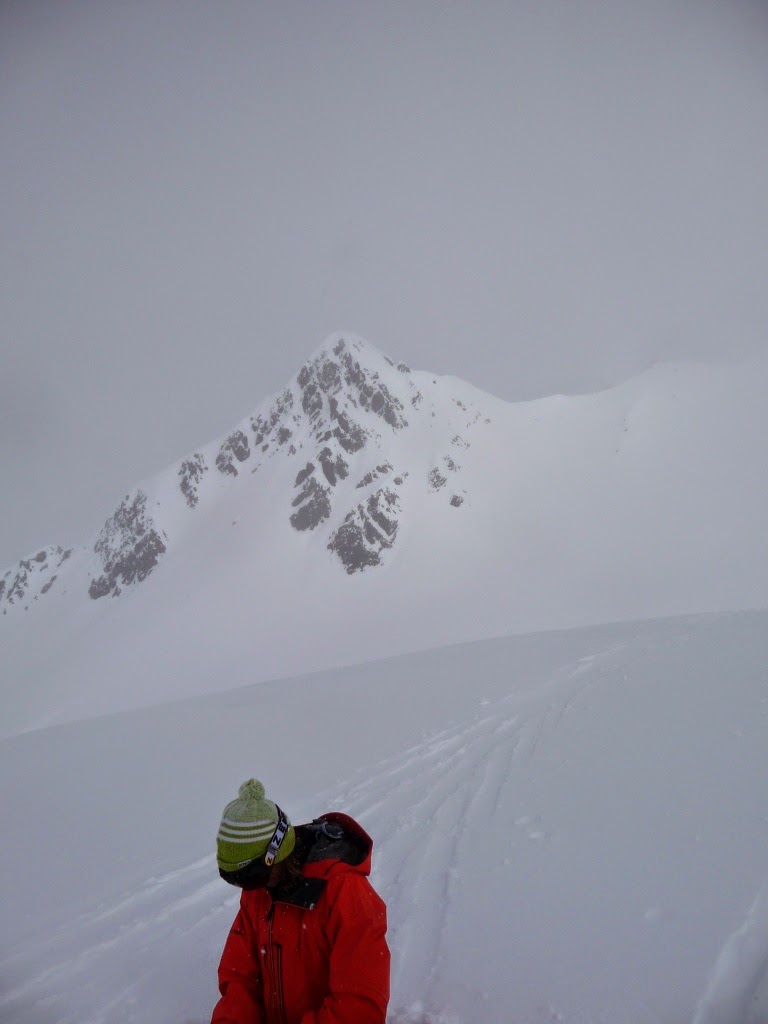 Skiing with Gene and Kevin, and watching them get their first real taste of AK was awesome. 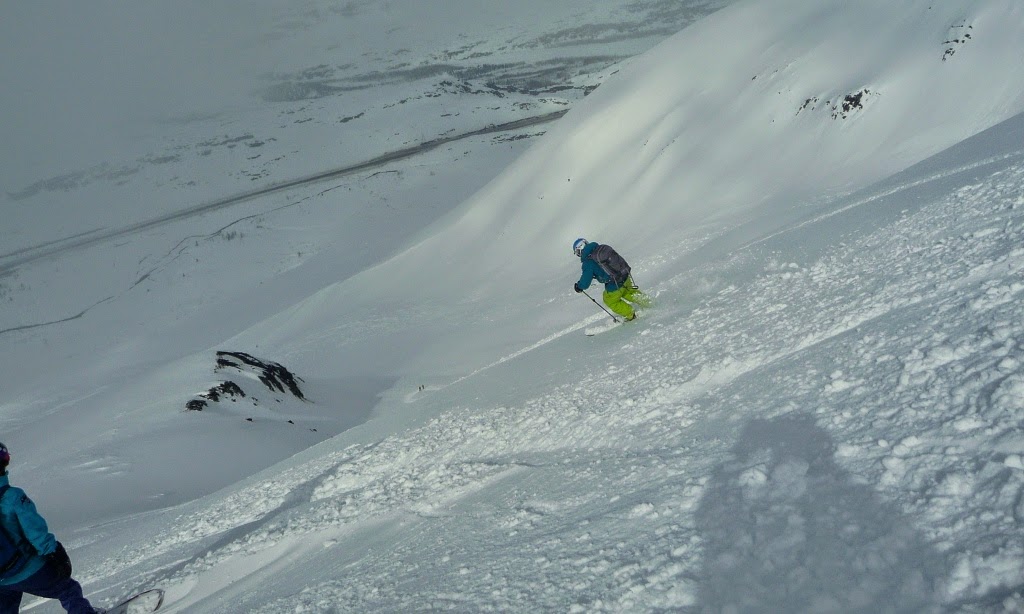 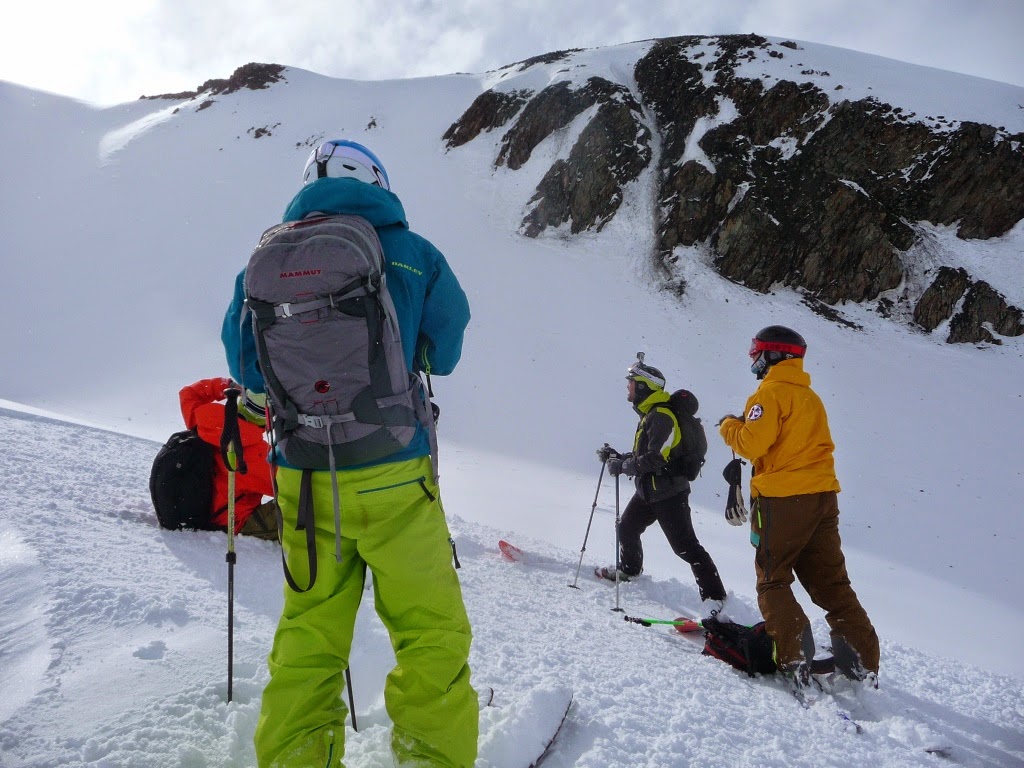 Saturday and Sunday we put what we learned with Nick to the test, and used Cody's sled to ski till we dropped.
Turns out, snowmachines are awesome.
Yep. I said it.
Touring is great and all, but despite what my friends say about how much I love uphill, I really just like to board. With the machine, we were slamming in runs faster than we could at a ski area. The more we did, the more efficient we got, and the better we handled it. By Sunday afternoon, we were climbing at 35 mph or better every run, not because it was cool, but because it just felt better the faster we went.
My favorite drop was on a ridge, where Cody would slow enough and I'd step off the side and just start running, letting him maintain some momentum and not get stuck before steering off the side.
I laughed everything we did it
I'm not going to say we were good, but we were having a blast.
To take a break from boarding, we'd mess around with the sled. I'd say this was wasteful, but really, our confidence with handling the machine just got better and better the more we rode. 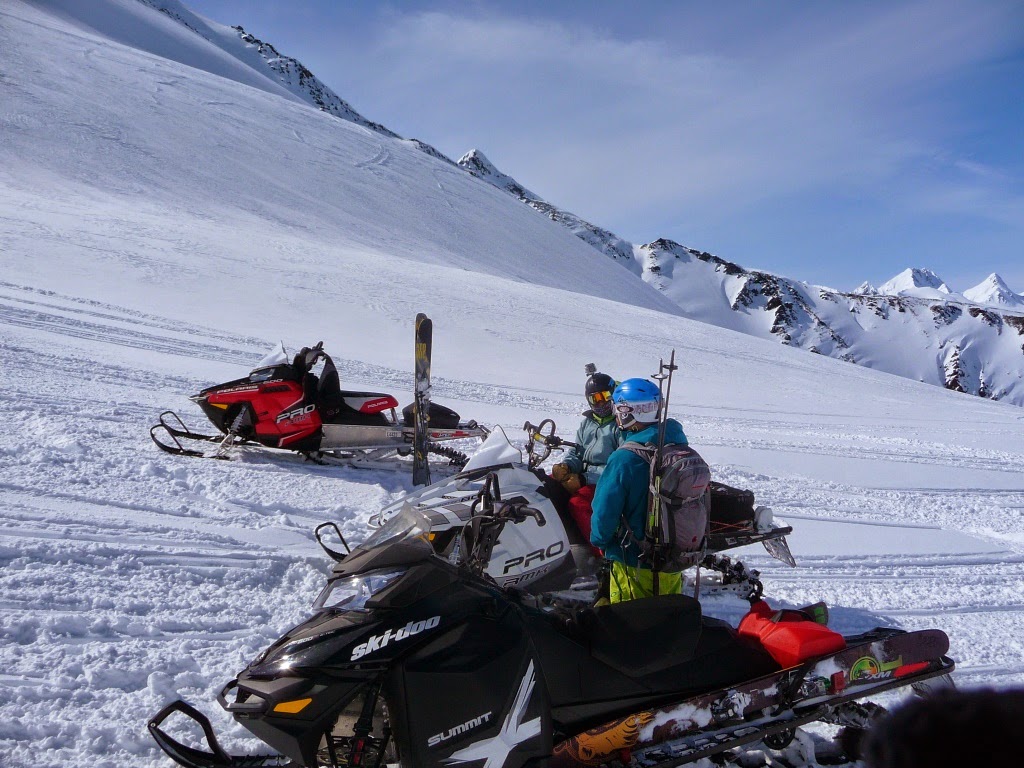 I have to say, I really want a sled now. This is the third time I've used one this year, and they really change the game for skiing. Sometimes, its just nice to ski, and in that case, they're a veritable chairlift. More though, I like the idea of using them to extend the range of my skins, and bring distant valleys into the fold.
My wallet doesn't foresee a sled living in the garage, but you never know... 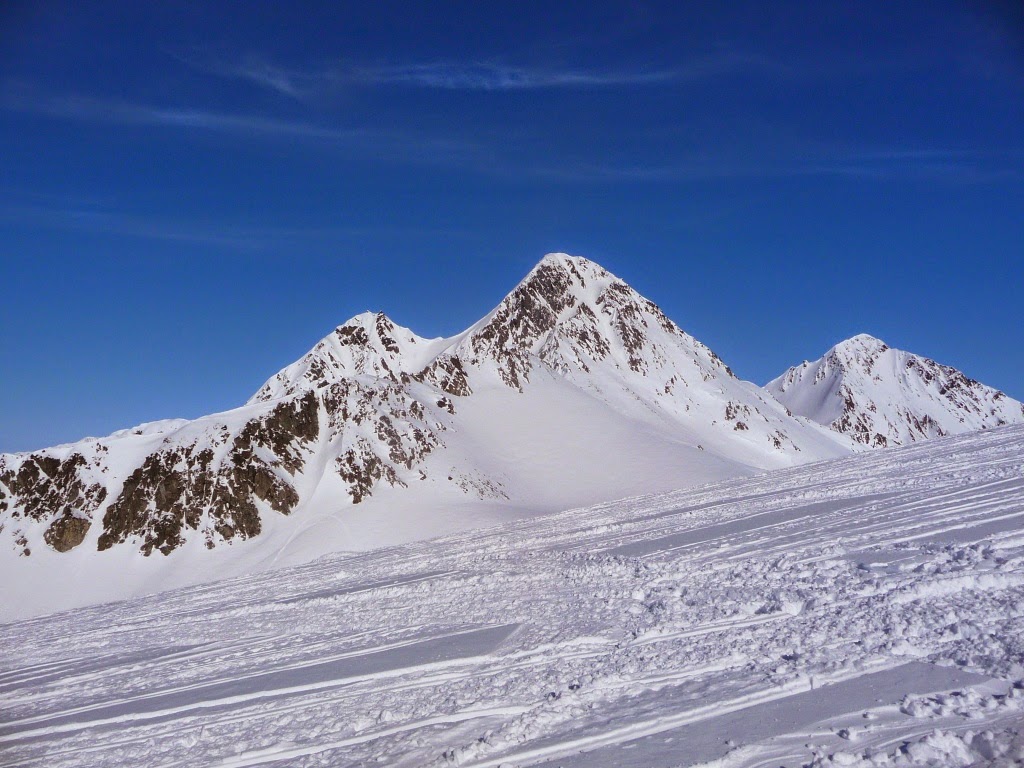 Awesome post! It was fun having you along! Love the picture of my bird too ;)

Thanks Jason, it was awesome flying with you!