Sometime back in September or October, the wheels began to turn, the emails started to go back and forth: winter is coming, and thick or thin, we’ll want to make an exit in late-January.
Colin has been plying us ceaselessly to visit Jackson. 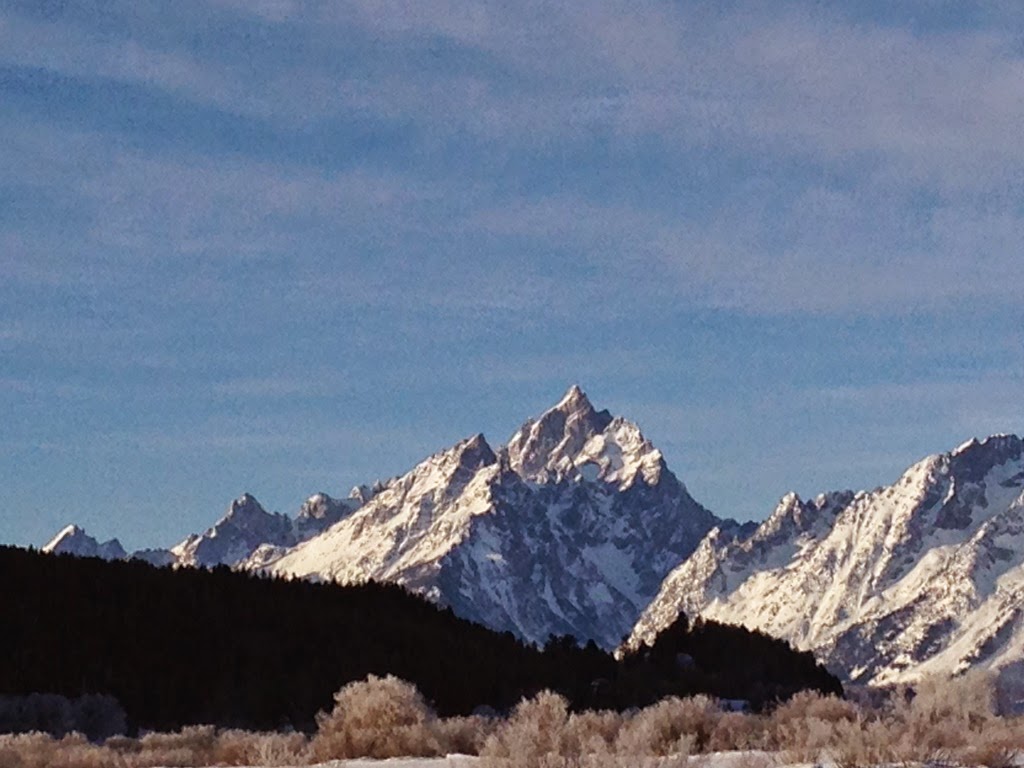 The crew booked their tickets, mobilized, and the AK semi-reunion was on: Cody, Colin, Dan, and Joe descended upon the Cowboy State. Nathan had intended to join as well, and we missed his presence and humor through the trip.


Day 1, everyone was eager to get down to business and start skiing the resort. While fresh snow was a bit scarce, JHMR is big, and full of nooks and crannies. Colin and crew guided us into the goods, and between runs in the trees, we charged groomers like a GoreTex-clad motorcycle gang.

A warm up trend was in the works, and with as strong inversion in place. Temps failed to go below freezing from 8,000-10,000 feet Sunday night.
Colin pointed us into Grand Teton National Park, and we trekked through the cold, thick inversion fog and forests to the foot of Prospectors Mountain to take a stab at the Banana Couloir.
South-southwest facing, the 3,000 foot line was taking a lot of heat. We ID’d a potential issue in the lower 500-700 feet of the line, where about 8-10” of transforming mank sat atop a smooth bed surface. It was soft, but non-reactive as we began the climb in earnest, and as we climbed, the layer was better bonded to the base, eventually becoming nearly undiscernible, likely due to winds that had blown while the snow was still cold.
The climb was a killer: no one was ready for the April-like heat, and the elevation took its toll on the sea-level dwellers. We pushed through, and eventually grouped up about 700 feet-ish below the top, in the shaded shelter of a narrow band of trees, dubbed the nest. Colin lead the final push, and Dan and I followed.
The bulk of the line skied ideally for spring, excellent corn perfect for opening up. We leap frogged our way down.
Near the base, anarchy descended as we exited the couloir and onto the adjacent shoulder we’d skinned.
This was a bad move. We lost sight of each other, and I Forest Gumped and got well ahead and alone. I stopped at the top of the final roll-over. Through a band of trees, I could see a sizable pile of debris where our skin track had been.
As I came to a stop, I pushed two blocks of the manky snow, each about half the length of my board. They rolled, and rolled, and rolled, gaining size and picking up more snow. About mid-slope, they triggered a classic wet slab, and propagation began, running out triangularly, grabbing ever more snow and picking up speed. By the base of the slope, the slide was fluid and fast. If someone got tangled in there, it’d be a bad day.
Shit.
Not good.
I looked again through the trees at the other debris pile. My first concern was that someone might have passed me and been intermixed.
Dan stopped a little ways above me.
He wasn’t sure where everyone else had gone, but I told him what I’d just kicked off.
I wanted to go investigate the adjacent slide, but I was also fearful that I could inadvertently ski below someone else. Suddenly, Dan said he saw Colin and Cody, directly above me, but out of my line-of-sight.
“I’m out of here.”
I shot into the trees toward the other slide, and then skied down the bed surface to the base of the slope and shot into the protection of the woods. I could no longer see the slope above, but didn’t feel safe being below it to keep eyes on.
I sat there, for what felt like a while.
It began to feel like something wasn’t right.
Eventually, the group began to come down.
Apparently, seconds after I’d got out from below Colin and Cody, one of them had inadvertently triggered a slide just as I had. Dan said their slide went exactly where I was standing, and had built up a good deal of speed and mass too.
While we had executed the more aggressive portion of the line by leap frogging from safe spot to safe spot, when we entered what in most conditions would be party ski-terrain, we failed to account for the fact that this area also featured the worst stability we’d seen all day.
Lesson learned. 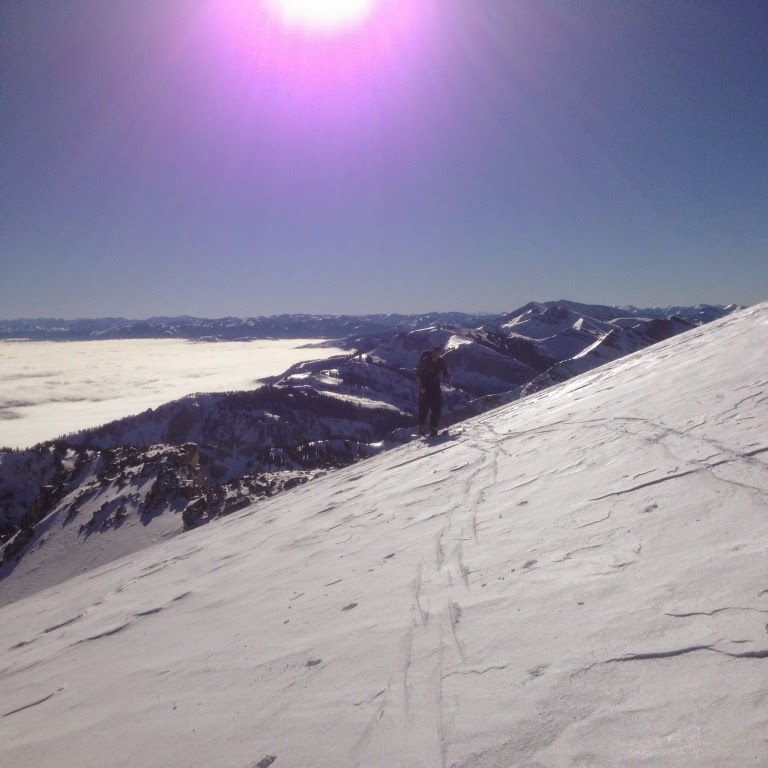 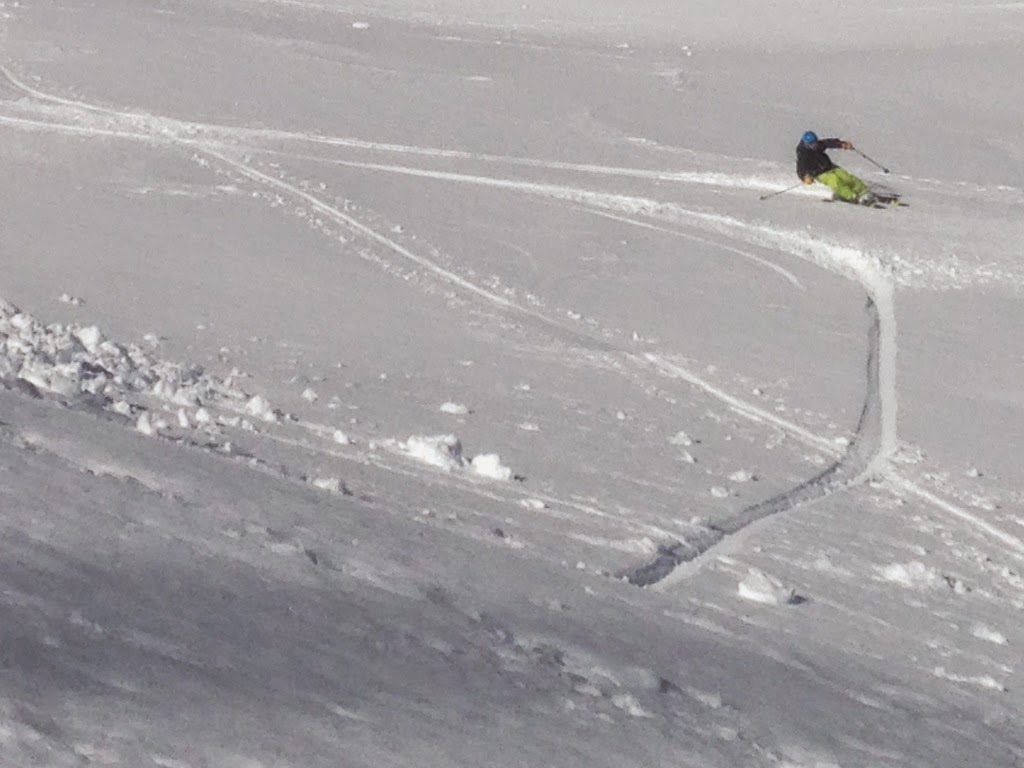 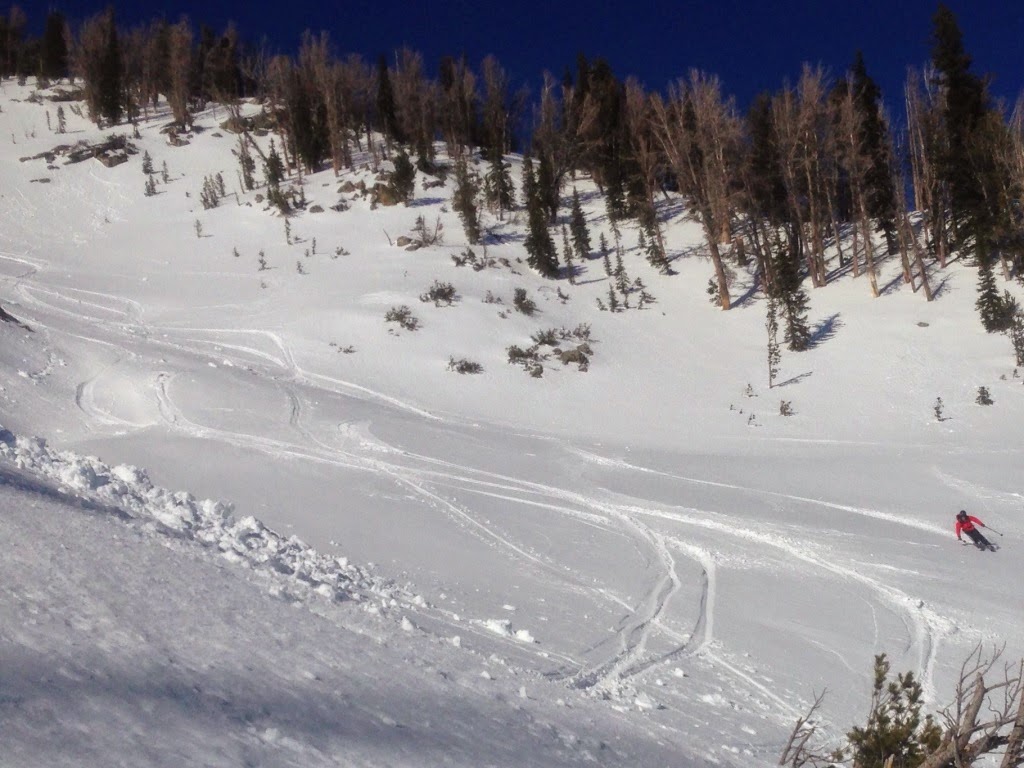 The next day proved to be warm as well, and we headed back to JHMR. The bump runs came in soft and supple like the best days of March, and we skied them all day. 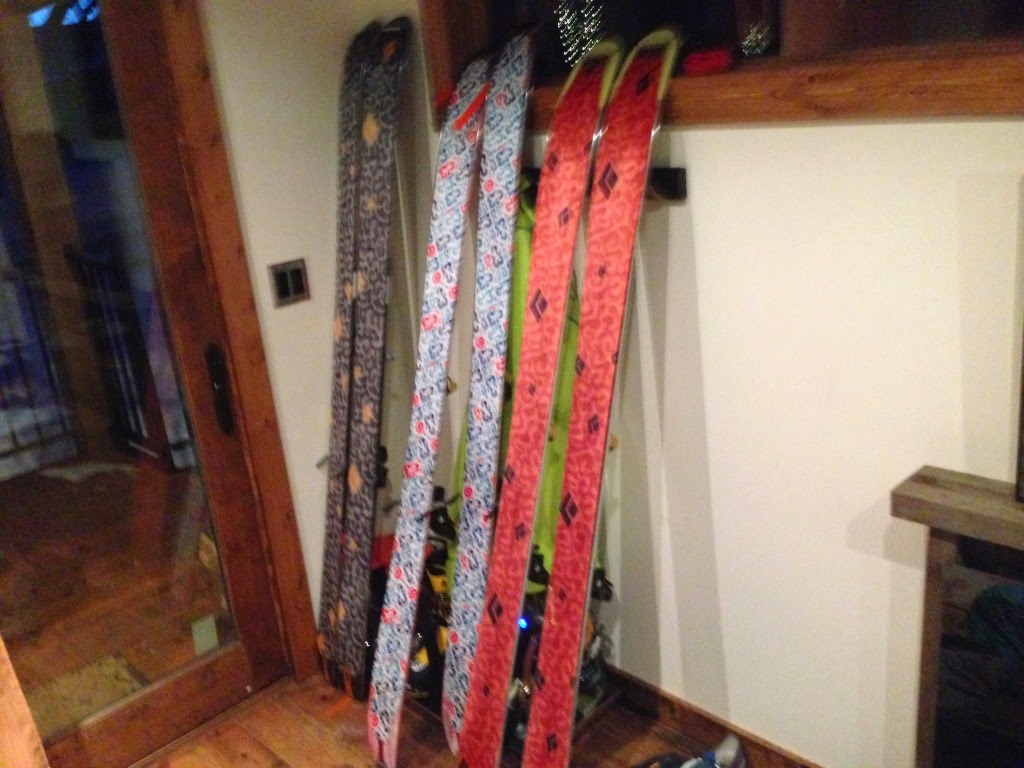 Sometime that night, my body revolted. The red-eye flights, staying up past my old-man bedtime, an ample supply of adult beverages, yadda-yadda, plus the fact that pretty much everyone I know or worked with had been sick in the weeks leading up to the trip: fate. Larangytis.
I literally could not order breakfast the next morning, although, the barrista thought it was really cute that Cody ordered for me (great).
A rest day helped, but as the rest of the crew split for points north, south, and east, I was happy to spend the next few days sleeping in, and getting some rest, and going to Teton Pass with Colin in the afternoons to successfully hunt for shaded powder in the trees.
I really got a kick out of skiing Teton Pass. A ridiculously short drive from town, and even shorter from the Village, followed by a ridiculously efficient booter north of the road, lead to incredible front country skiing. The options for going further or deeper on weekends stretched seemingly as far as the eye could see.
I think as much as we were all grateful for Colin showing us around his backyard, we were also a bit envious of the ability to go deep or stay close, and have high-quality skiing, regardless. I sure was. 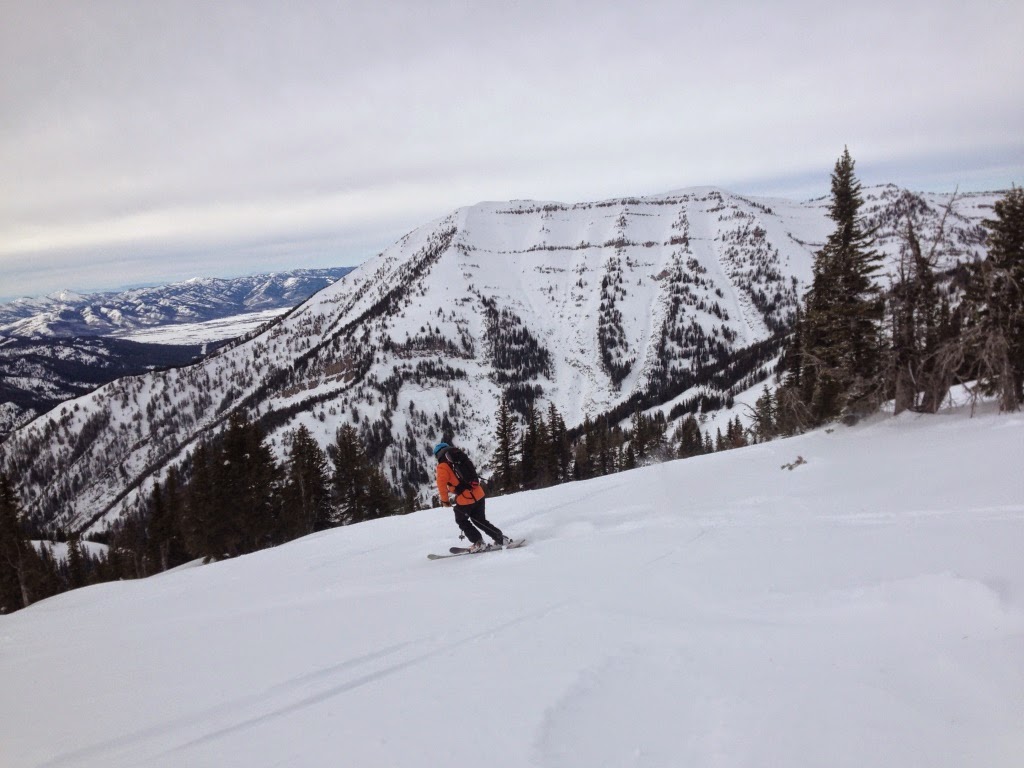 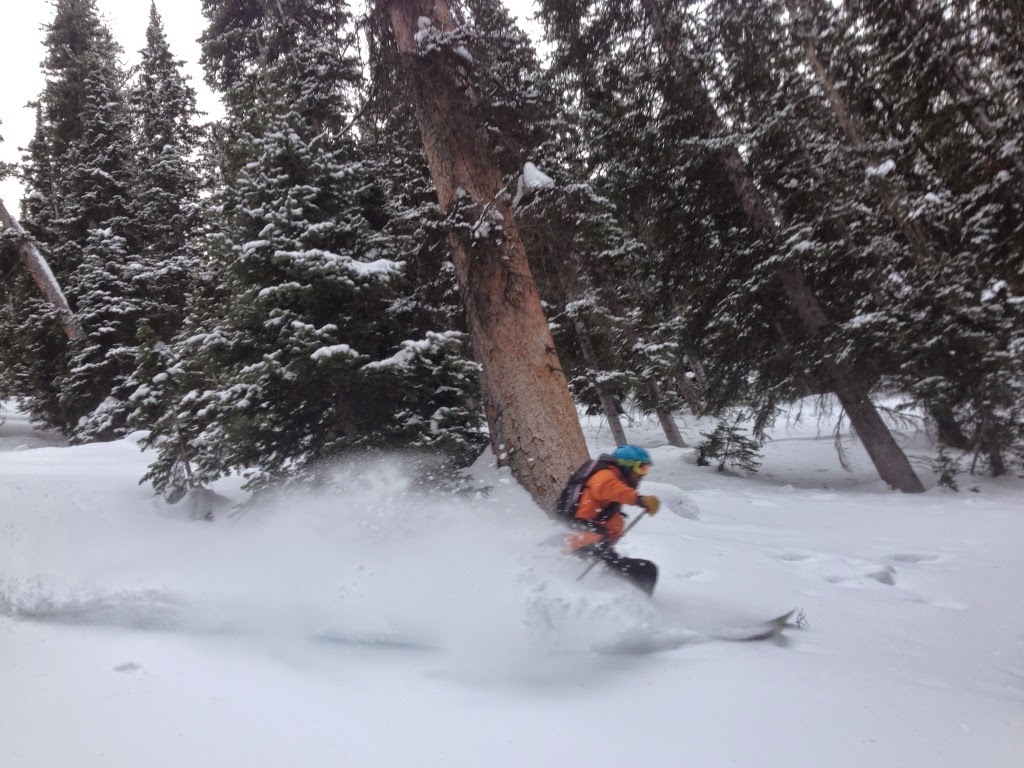 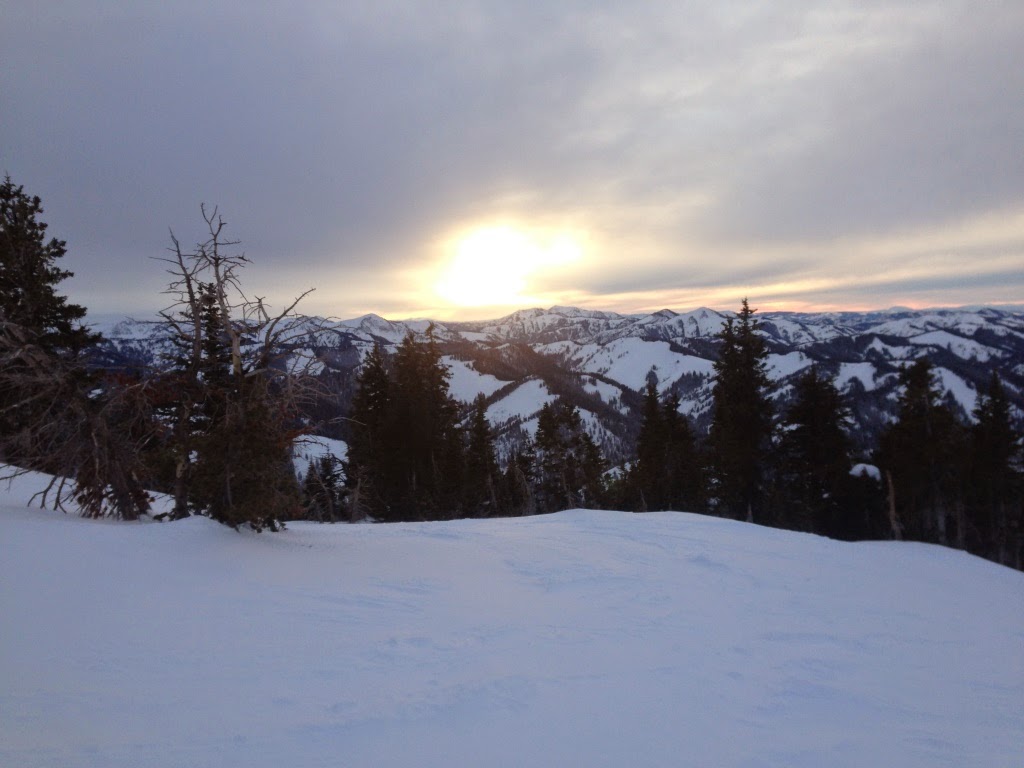 It was great catching up with Colin and spending time with the AK boys, but a huge bonus to this trip is the fact that Tom winters in Jackson.
Tom has actually spent the last 6 winters in Jackson, working in neighboring Yellowstone and Teton national parks, doing an incredible assortment of jobs. I got to hang out with Tom and Sarah mid-week, and then on Saturday, Tom treated me to once-in-a-lifetime trip into America’s crown jewel national park.
This winter, Tom is driving tracked snow coaches into Yellowstone (the roads aren’t plowed in winter, but are instead groomed for travel by the coaches and a limited number of snowmachines). Compared to the bustling summer months, the park is a quiet place this time of year.
Tom had a group heading to the hotel at Old Faithful that would be staying for a couple nights, so he was taking them in, and then had the rest of the afternoon off. I got to ride shot gun as his helper for the day!
On the way in, Tom stopped at some of his favorite spots to let the group out and go for short walks to check out hot springs, waterfalls, and to look for wildlife, while he regaled them in stories about the park’s history and his own experiences hiking and camping there.
We made it to Old Faithful mid-day, and after helping the guests unload from the coach, we picked up a pair of wide touring skis and went for a ski around the geyser basin.
I guess I’ll shut up and let the pics do the talking? 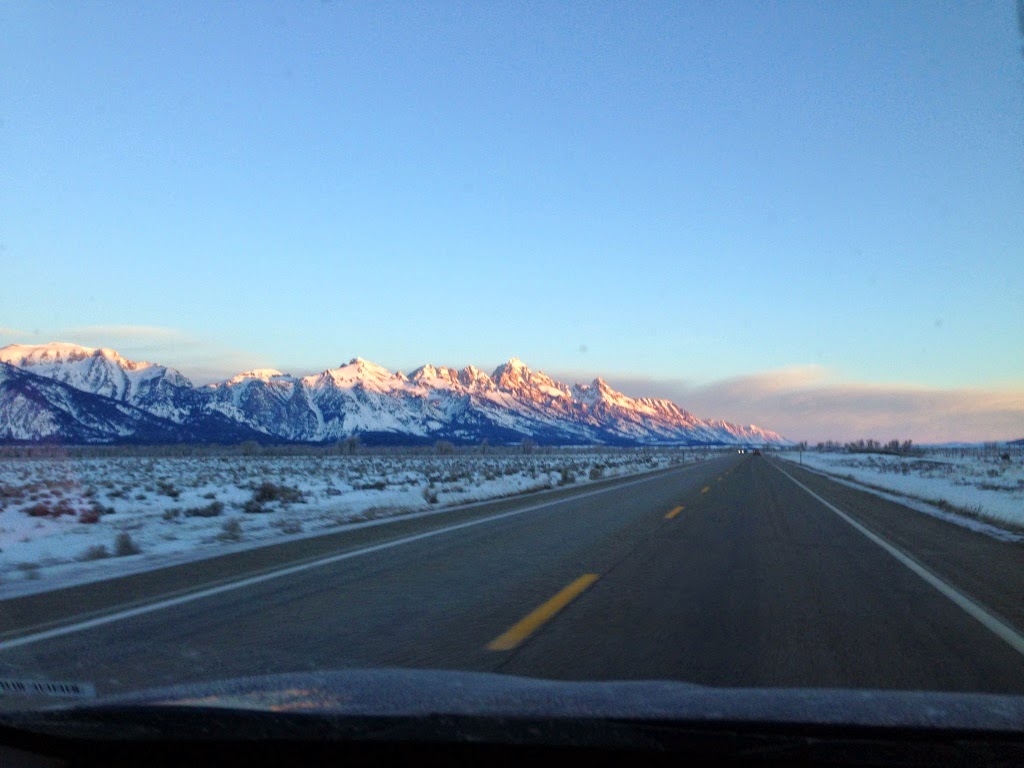 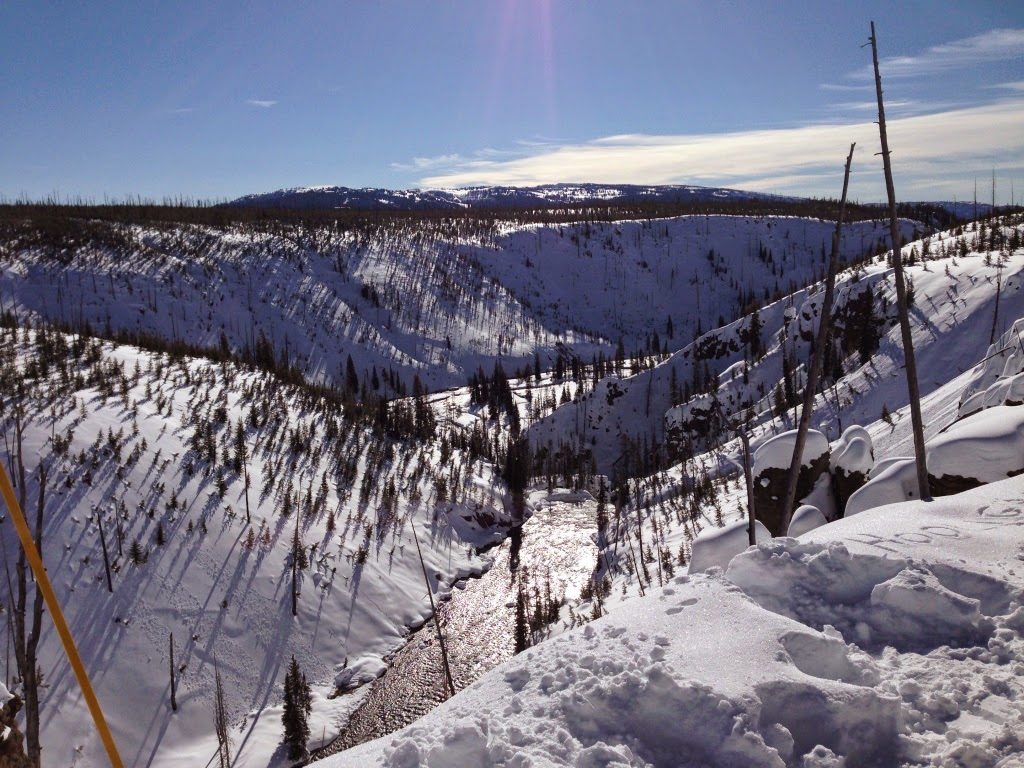 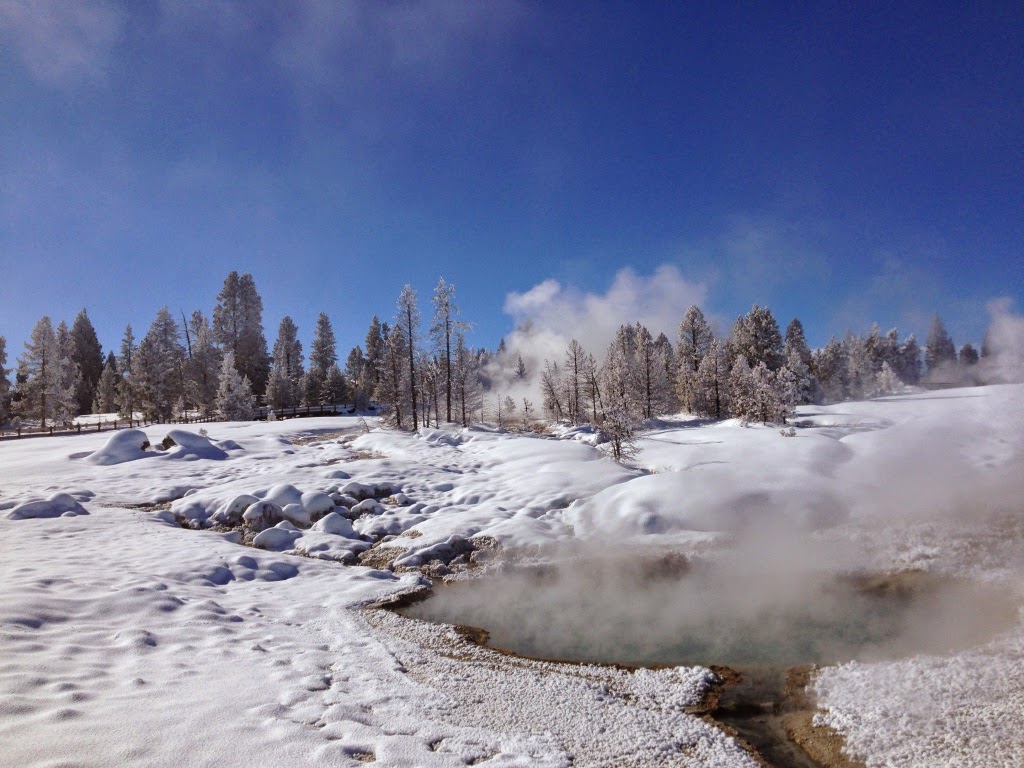 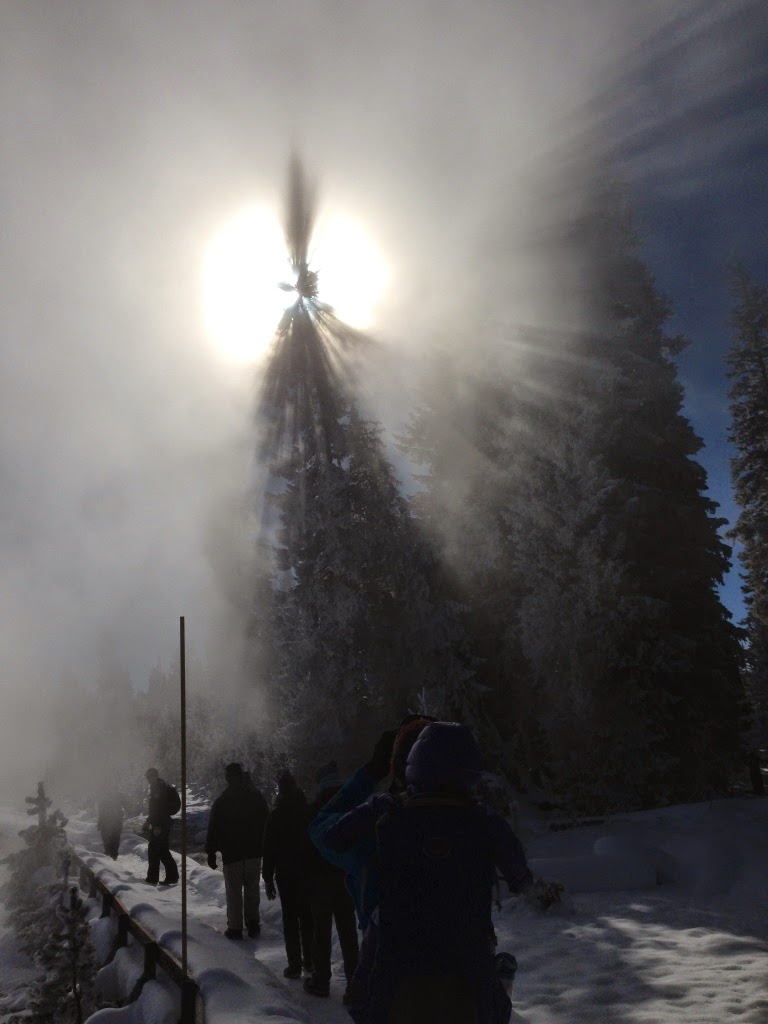 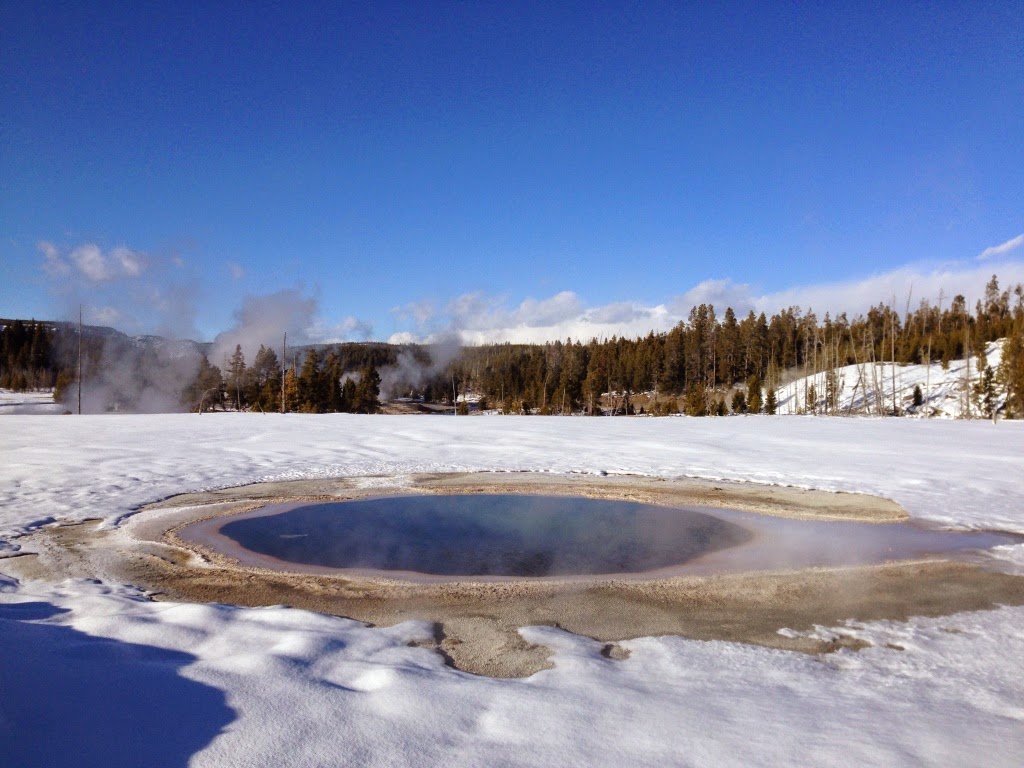 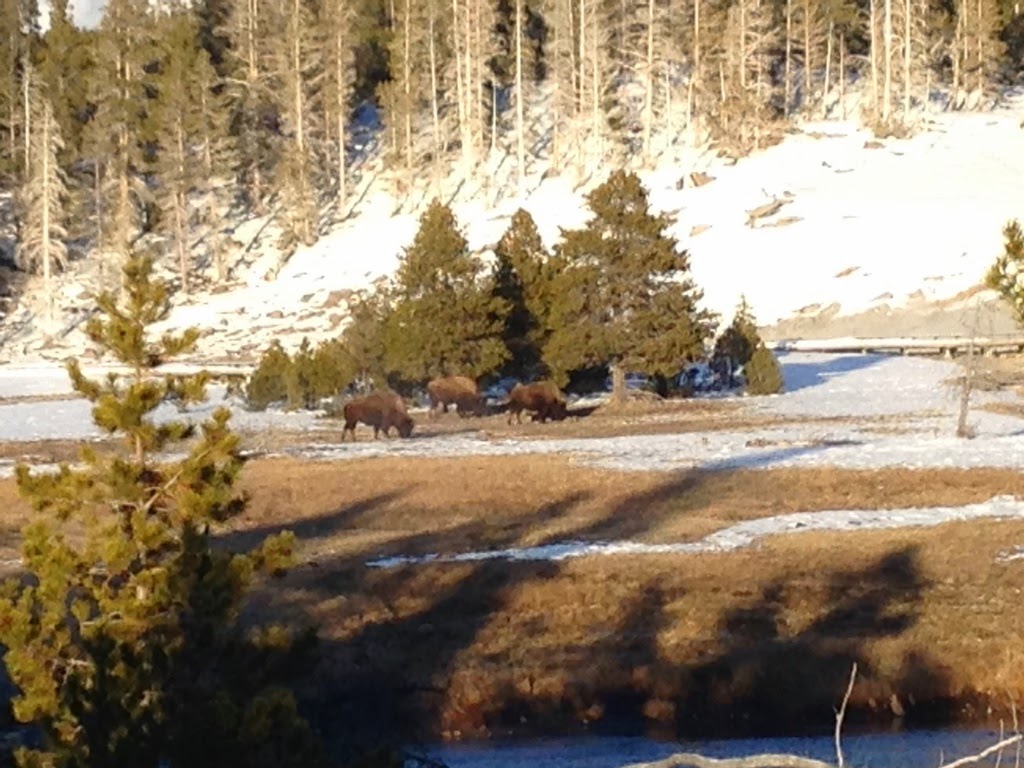 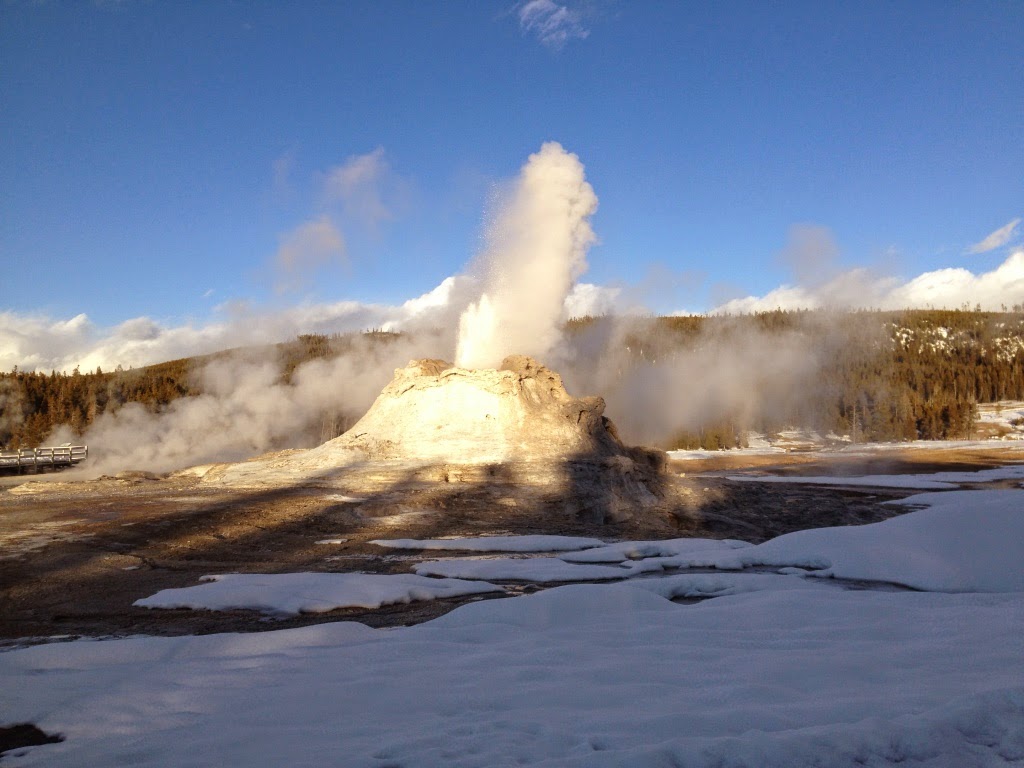