Key Slot Couloir and Other Adventures

Like the fragmented memories of childhood, there are lines and mountain faces that live in the recesses of a skier’s mind, surfacing from time to time – as we drift off to sleep, in moments of silence before the storm lifts and the mountains are yet again unveiled.
They hold an incredible presence, and yet, they are disconnected and incomplete, as they remain a dream rather than reality.
Then, one day, everything comes together, the line is skied, the missing pieces are assembled, and you turn around, look up at your tracks, and realize you can’t remember one complete second. A blur of heavy breathing; waves of air-infused snow; metal edges, sintered bases, and crystalline water colliding; walls of rock and sharp-edged fins flying by.
You know right then, staring up, that you will never live that moment again. It will never get better.
These are lifetime lines. 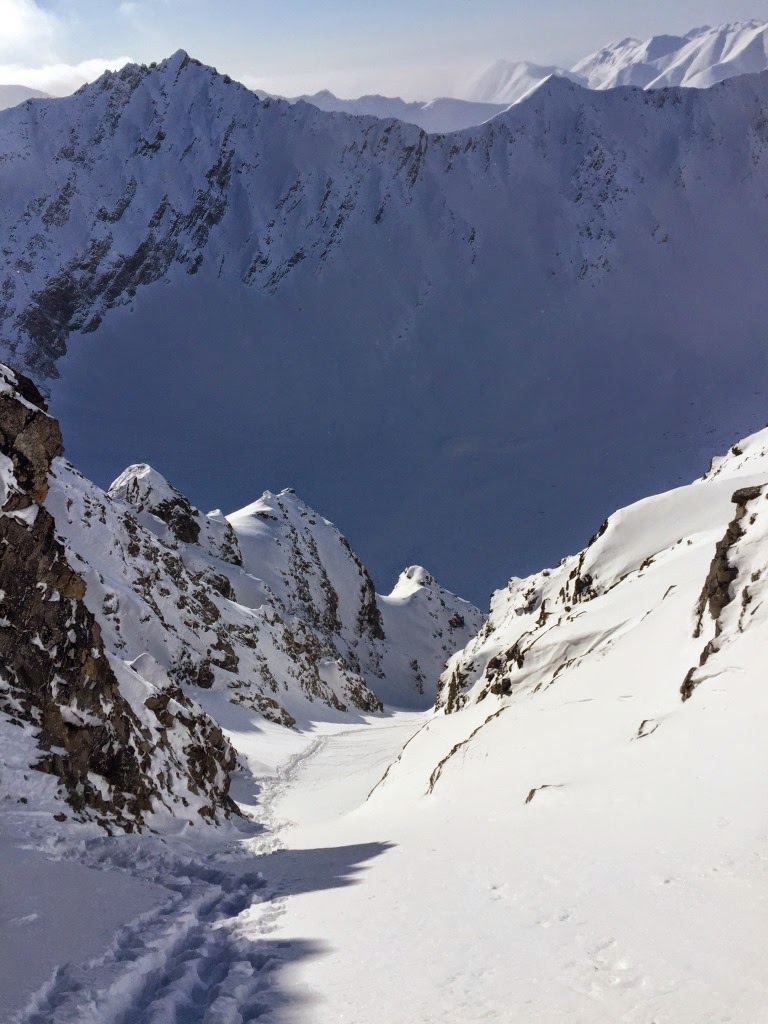 The last storm cycle to roll through poured the snow on heavy and hard in Hatcher, awakening a very active avalanche cycle that effected every aspect and triggered nearly every size of slide.
With a dearth of beta or data, Cody, Nathan and I went on an all-day pit-digging mission on Friday.
We targeted a central ridge line we’re familiar with located in a tributary of the Little Su that sported east, north, and west aspects in the 3,250-3,750 elevation band. We hit each aspect, with each person then spreading an additional 100 yards across the slope itself, to further cover the spatial differences one expects to find in Hatcher.
Our results proved to be surprisingly consistent and promising, again, for Hatcher. North and east slopes supported the deepest snowpack, ranging from 140-190cm, while west-facing were the thinnest, sporting 110-150cm. All slopes supported a storm layer that varied in depth, but averaged around 30cm, fairly well-bonded to a crust of varying thickness (from nearly imperceptible, to snow saw worthy). The storm layer had an average trigger result of ECPT20, and was at worst, a Q2 sheer. In many cases, the collapse was very subtle. Basically, if the storm slab went, it would in all likelihood go soft and struggle to propagate. The lower “ground layer” that extended from the surface of the crust to the tundra was quite cohesive despite its’ heavy component of faceted snow, and though we didn’t isolate every pit to the ground (we dropped 9 pits on a day where the high was minus 7 after all), the ones we did, took a rather immense amount of energy to trigger (body checking after getting to ECPT50. When this last layer did go, it slipped fast and clean to the ground. Undoubtedly, the deep cold was helping to provide a lock down.
We did not bother to target any due south-facing slopes given the progression of the season, though our west face pits all had south-westerly orientation.
We didn’t get much skiing in, and didn’t return to the trailhead until something like 7:30, but we were confident with our results and ready for some action on Saturday.


The target ended up as a toss-up between either Arkose Peak Couloir or the Key Slot Couloir – a deep crack, lined by jagged walls, with around 1,000 feet of run, located on the northern ridge of Arkose Peak. I first got an in-person look at this line about a year ago camping in the area with Liz. At the time, Hatchers was in the midst of a prolonged multi-week dry spell, and the line promised to be variable at best, total crap at worst. We made the right call that trip and targeted a more open, and southerly, line, right next to KSC. A few weeks later, Nathan and Liz were able to ski most of it, but found a lot of debris that had come off the walls.
We returned this year to find very different conditions: deep, cold powder on what will likely be the coldest day of the 14-15’ season.
We opted to target KSC over APC for two reasons, one, the former didn’t have any slough or bomb debris, and second, the latter looked fat and loaded in its critical upper section.
The boot was hell for my comrades, but I packed a secret weapon: Verts.
I resisted buying these presumably over-priced plastic snowshoes for a two seasons, but with the wallow-fest that has consumed nearly every weekend this winter, I figured I’d pony up and try them.
It took maybe all of 10 steps before I turned around and looked at Nathan and Cody, both up to their hips, and we all realized, we all needed these things.
I did what I could to make a trough for them so at least they were only plowing knee-deep as opposed to waist, but it was still a bear for them.
I’ll stick to the objective rather than the equipment, but lets say that while going from booting to Verts isn’t quite like snowshoeing to skinning , they definitely let me really enjoy the upward passage through those high, cold, granite walls.
-There’s something about being enclosed in the blue granite hallways of the Talkeetnas that is all at once thrilling and calming.-
There’s not a lot of places that provide protection in KSC until within maybe the last 150-200 feet where a super skinny and thin side shot heads climbers right and provides an abutment to post-up beneath. Re-grouped we made the next push through the line’s choke and into its final pitch. Topping out looked promising. Nathan lead the charge and got us up under the safety of a nice outcrop maybe 20-feet below the ridge line. He went for the next push, crossing a nervously talkative slab. With maybe 10 feet to go, he sunk off the top of the slab into deep, unconsolidated sugar and the black holes of interspatial gaps. I moved up to join him.
The sugar was bad. A hasty pit resulted in an ECPT of 0! It was so frustrating. I wanted to see that ridge so bad. We could practically touch it. We assessed trying to use the protruding rocks to pull ourselves up, but just moving toward them triggered further sloughing.
Even if we pulled ourselves up, we were practically guaranteed to release a lot of loose snow on entry, a potential problem with the slab below and narrow choke just below that – as it was, each of us had to manage a fair amount of broken soft slab that pursued us through the choke. Worse, would have been the high likelihood of striking a rock in that bottomless sugar on entry, and the possibility of then tumbling into said slab and choke.
The CBA just didn’t work out for those last 10 feet. We were done; time to drop.
We were lucky to enjoy some sun without the fear of its heat at least, and were all happy to have a brief chance to pretend we were warm.
One by one, we dropped in. There was never a question on the way up about how the line would ski, but if there was, it was erased when Cody and I watched as even though Nathan had disappeared from sight, his contrails were visible drifting upward above the high walls.
I don’t really have any cohesive memory of the run: I know my slough was chasing me through the choke – I could literally feel it on tail – but once through, we all took the same line and banked hard skiers right onto a large side-wall. A shot back, and I saw what was left of the slough arresting in the cold pow behind me. The next thing I actually remember was seeing Nathan peering from behind the walls at the base of the line and waving me through. I was appreciative to have enjoyed the entire run totally uninterrupted.
Exiting back out Lone Tree Gulch was a breeze compared to last year, where firm conditions sucked us into the deep ravine. 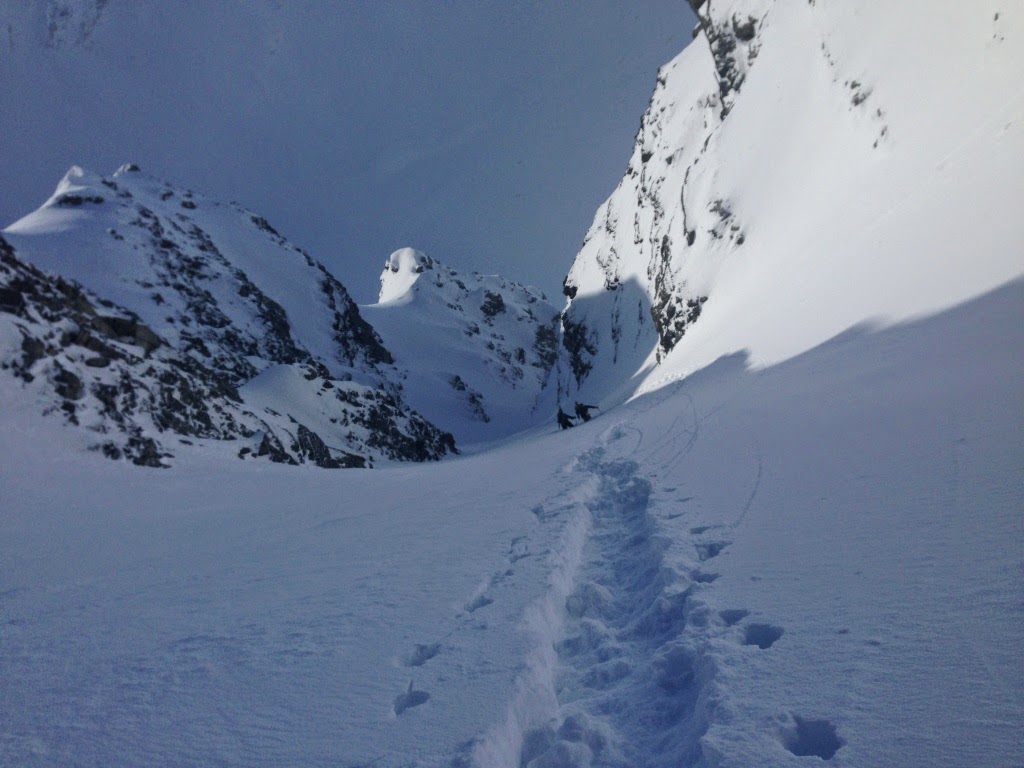 Sunday, a long-forecasted pattern shift began, and blew in clouds, snow, and slightly warmer temps. Kyle and I went out and picked on a short, steep, skinny couloir I skied with Nathan and Cody a few weeks ago in similar conditions. It skied exceptionally well, and we ended up tagging it twice. My legs were toast from the long weekend, but Kyle just picked up a brand new pair of wax-based classic skis and has been jonesing for opportunities to use them. I was hesitant to go for a classic ski at 5 pm on day three, but quickly found myself glad we tacked on a few blissful kilometers of blue/blue extra kick-and-glide on Archangel.