Northeast Pinnacle Couloir and Other Fun in Fairangel 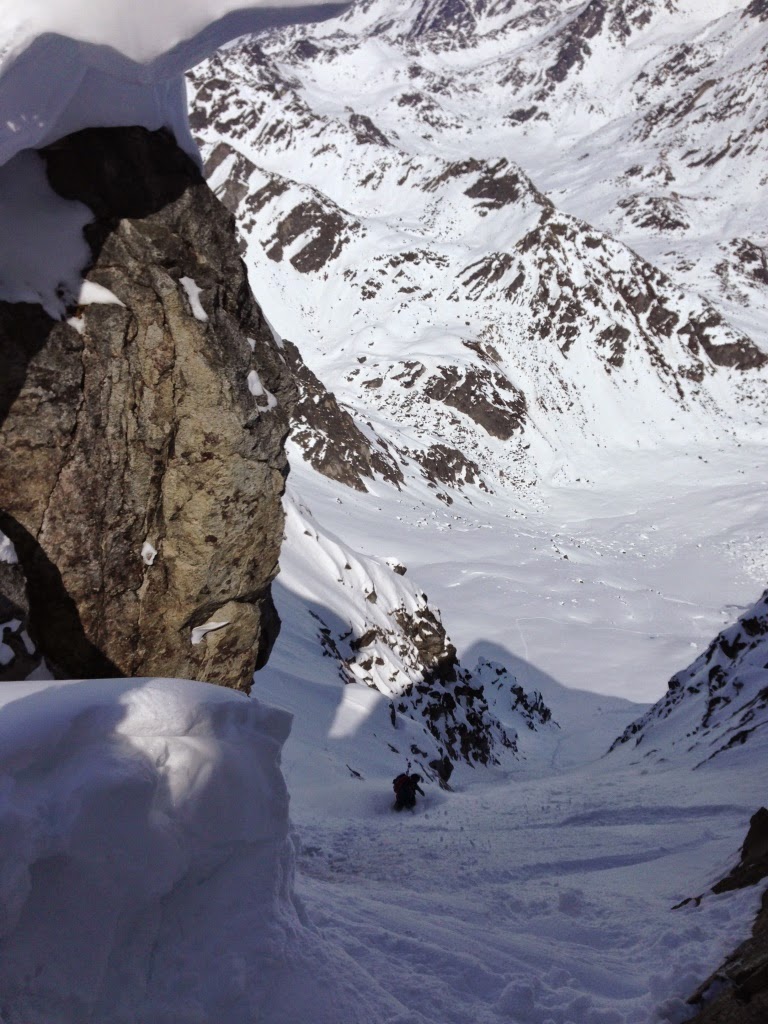 Ya...I was a little stoked at the bottom!


I headed back into Fairangel solo on Sunday. With the weather forecasted to be a carbon copy of Saturday, and confident in the area’s stability, I was comfortable with being alone.
I’ve hardly done any solo days this season, and though they’re not a great habit to get into, when conditions line up, I find they offer their own set of rewards.
I wanted to first check out the cross-cut couloir before it had too much time to cook, and then spend the rest of the day playing in the dark and cold shadow of the ridge that separates Fairangel and Webfoot.
I knew going in that the cross-cut line probably wouldn’t be a full-go, but I wanted to poke at it. Surprisingly, the first 500 feet of the line was in good condition: about 2-6 inches of slough that was the consistency of cream cheese on a rock solid, but carvable base. I ended up climbing a titch less than half the line, broiling in the sun the whole way. Just a little shy of midway, the snow changed suddenly, and consisted of a little over a foot of un-sloughed, wet, slabby, mank, with a crunchy untransformed layer immediately below that, and more layering deeper down.
Aside from concerns about how stable this top layer was, I knew ski quality was going to get worse, so I parked on a big exposed rock in the middle of the run away from the walls, and transitioned.
Skiing the full line will remain somewhere on a mental list, and would make a good spring objective in another 2 weeks, but is otherwise probably better reserved for mid-winter.
The lower portion of the line skied really well anyway, but I was happy to scoot over into the cold and dark side of the valley and get out of the infernal sun.
I had my eyes on a short, but very steep chimney that split two granite peaks. As I began the boot in earnest, I was impressed by how much snow the chimney held as I wallowed thigh deep, even with verts; and was further impressed by its steepness.
I don’t need to say it skied really great right?
I dropped all the way back down to the base of the valley for a nice long powder bowl run, and then headed back up, and broke a new skinner on a slope between the chimney and the east buttress of the Pinnacle to have a recon look down into the Upper Webfoot-Fairangel Crossover Couloir for a future tour.
By the time I reached the ridge, the efforts of the past two days had finally caught up with my legs.
The snow was really nice on the climb though, and I savored the moment, knowing this would very likely be my last powder run of the season.
Though the day before we had heard the echoes of voices from a number of skiers and even a couple of snowmachiners down in Archangel, been passed overhead by a parade of small planes; today had been markedly quieter. Except for two planes earlier in the morning, I hadn’t heard another human-generated noise all day. Sometimes, the sound of a distant tumbling rock would echo, and some ravens had made a brief ruckus later. That was it. I could list all the sounds I’d heard in the past 6 hours on one hand.
With that, I pushed the nose of the board over the lip, took one more look around, and dropped in:
One,
More,
Time. 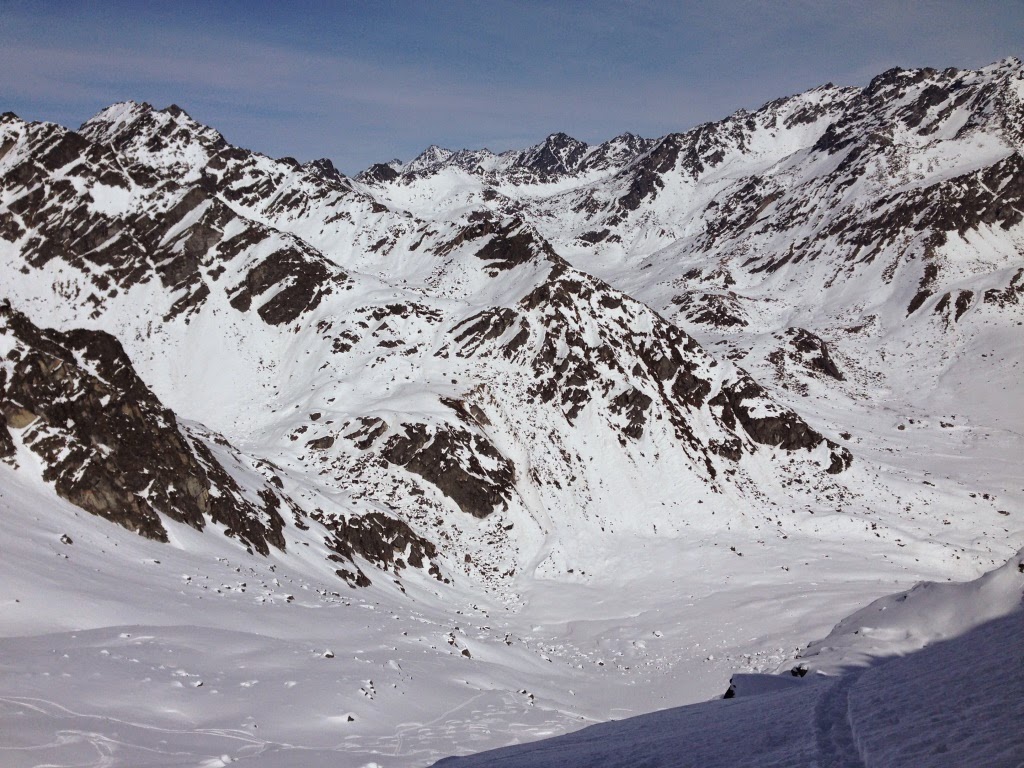