I was done last weekend.
Why not?
Nathan R sent me a message mid-week: “Wanna ski this weekend?”
Why not?
I was clearly not done last weekend.
We debated a few options, and settled on Ram Valley/Falling Waters neighborhood.
A lot of hiking got us to skin-able snow, and a bit more skinning got us beneath the north side of Raina Peak, a Chugach 6,000 footer.
Temps were cool and the snow deep at the base of a chosen line.
Say, you know what are great?
Verts!
Say, you know what you don’t leave in the car, ever?
Verts!
We wallowed up 1,400’ feet of knee- to waist-deep cold pow.
The final pitch was steep…I don’t know how steep, just that my hat brim was getting in my way.
The final 20 feet was thin…I know how thin, 1-1.5 feet of semi-consolidated fresh snow on Chugach base grinder.
In hindsight, we should have kicked in and dropped, but after that much of a battle, we wanted that last 20 feet, even if it meant a core shot.
Nathan made the push, plowing through a small cornice.
We obviously both spiked gremlins on the drop, and on mine, I took out a small swath of snow that slipped and ran, but the top always seems worth it in the big picture.
And as for the remaining 1,380 feet of vertical that wasn’t thin: Incredible. 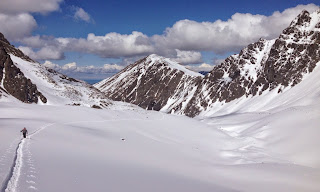 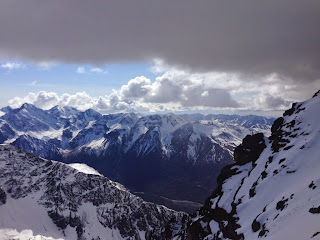 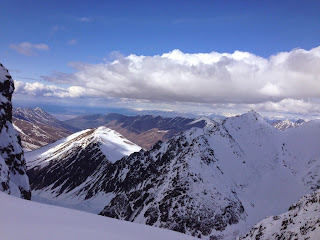 I probably could have gone either way on Sunday, winter or summer pursuits, but Kyle was motivated, and had a bone to pick with the NE Pinnacle Couloir. Not completely stoked on how he skied it last weekend, he wanted a re-match. I was a little skeptical we’d still find cold snow back there – for Pete’s sake, we got munched on by mosquitoes in the Archangel parking lot at 9AM – but I couldn’t turn down the opportunity to spend another day in the fair valley of Fairangel.
Indeed, heat had worked its way higher than the week prior. The cross-cut couloir looked like it’d taken up a 3-pack-a-day habit. A few good slides had released from hanging slopes in the area leaving behind some blocky piles of debris.
North-facing shots though were still looking good, and if anything, the base was more consolidated, and the surface nicely refreshed by the diurnal showers that had parked over the mountains each afternoon.
The boot up the couloir felt a bit easier thanks to the firmed up base, though the old booter and tracks were largely gone.
Our friend, the Buick-sized cornice hanging over the top of the line, had melted back and lost some mass, though still lurked with deadly consequence.
The top out was much easier since we’d busted down the ridge cornice the week prior.
Kyle dropped first.
What’s the word I’m looking for?
Slayed.
Yep. Slayed.
I launched in next and like last week, stayed high on the skier’s right.
I was feeling pretty beat, but Kyle talked me into skiing the hot pow down through the rest of the bowl and doing at least one more bowl run.
As we climbed back up, the bright May sun gave me a boost, and we opted to keep climbing to the slope adjacent the couloir.
Of course, some afternoon clouds set up, and we sat around for a half hour waiting to see if maybe the lighting would pop, but, in the end, it was still pretty descent, and the boot-top glory pow made the lighting inconsequential.
Exiting was far more challenging this week. From the base of the valley to the road, I waded through heinous, bottomless mank. I probably should have clicked the board in half, as at one point, I literally resorted to paddleboarding. It was not proud. The road was super slushy and had an attachment complex (grabby), but firm beneath so we got through it. 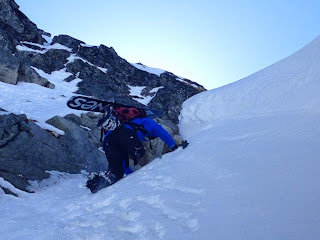