Cramp'n my style; Are Splitboard crampons worth it?

Ski crampons are an opinionated topic in their own right. International ski mountaineer, Andrew McLean, lists them as un-pack-worthy, and calls them “backcountry crutches,” advising users to “learn to skin.”

After years of hit-or-miss use of ski crampons on splitboards, I’ve tended to side with this argument as well, though I think there are a few noteworthy differences between being a hardbooter and a softbooter, and the application of ski crampons.
In my mind – and I imagine most others – the iconic terrain a ski crampon would be employed in, is probably some wind-hammered, icy ridge, with a lot of exposure, where slipping is just not an option.
In reality, I think the actual image of where ski crampons work best for splitboarders is a boreal rain forest, whose floor is covered by rain-hardened snow, or the gleaming slopes of an Alaskan peak, sometime before noon, in late-March through April, where frozen sun crust blocks the way to the goods up high or the afternoon corn.
Basically, the more iconic, agro, ski mountaineer terrain, that ski crampons would seem like the right tool for, in my opinion, is better attacked with actual crampons. If you have hardboots, they may be sufficient on their own.
To start out, I like to ski big lines, but I like them cold and soft. Define soft as you will. If I can bite a consistent edge in, I’m good; if I need ear plugs and a new life insurance policy, I’ll find something else to do.
I’m for sure not into super agro, technical, or slide for life conditions.
The more I’ve used ski crampons, particularly in more exposed parts of the mountain, the more I found that they lead me to go places I probably shouldn’t, and attempt to take lines I would otherwise avoid.
The advantage to ski crampons is pretty obvious, you can add some teeth to your climbing set-up and keep the decks off your back.
The disadvantage is that they work best on the crappiest of snow surfaces: thick crusts, windslab, ice, et al.
Instead of seeking out softer, and often safer routes, or natural benches and ramps, they encourage the climber to look for what are oft red-flag surfaces, and in-doing so, tend to facilitate climbing steeper routes, because you can.
Let’s imagine this iconic, exposed ridge again.
It’s wind blown, hard packed snow and ice.
Skinning is OK, but it’s not awesome, and the ridge is tilting upward for the final pitch to the summit.
On either side, the ridge falls off precipitously, likely overhung with cornices.
Exposed rocks and tundra protrude where the wind has exposed them.
You could slap on those handy-dandy crampons you’ve been hauling the last 4+ hours in your pack.
Ahhh, but now you’re making a zillionion kick turns as the tilt turns up.
Well, that’s fine, but kick turns burn daylight, and on this firm surface, even with your spikes, you open the door to slipping each time you make one. If you slip, you’re probably going off the side.
The ridge is narrow, realistically, more narrow than it looks because of cornice danger.
Maybe you get tired of the relentless kick turns and decide to eke out a little more distance onto that cornice…it’ll probably hold. Maybe you can access a bit of softer snow just off the side of ridge, rolling the dice on the windslab that you know lurks beneath.
You’re also going to have to shift the trajectory of your track for those exposed rocks ahead. Too bad you can’t actually use them as points of relative safety, now they’re basically traffic cones in the way of your route.
For the sake of keeping the decks off your back, you may find yourself cutting a lot of little corners on overall route safety.


On the other hand, maybe it’s time to switch to booter mode. In these conditions, it’s probably a good call to put some crampons on if you use softboots.
You can take the most direct line, dead center up the ridge, well away from those damn cornices or sneaky buried windslabs that lie below the apex of the ridge. Rocks or benches are now potential islands of safety, not hazards to avoid. Each step is secured with metal points, and no acrobatic kick turns are required.
Soon enough, you’re on top. 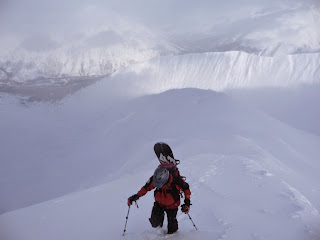 Before I’d toss the ski crampons out completely though, I think there is a scenario where I have routinely found them helpful. For the most part, in Southcentral Ak, it’s from March on, and it’s dealing with rock hard conditions in the lower elevations and approach slopes.

As the progression of the season ticks on, these slopes start to get baked in the afternoon and evening hours, but are cold and slick in the mornings. Occasionally, I’ve encountered these conditions mid-winter after a melt-down has soaked lower elevation snow and left it hard and re-frozen.
Good skinning technique and route selection can usually get you through this zone: target natural ramps and benches to avoid side-hilling and maximize skin-to-snow surface contact, seek aspects with breakable crusts or any type of soft snow.
That being said, sometimes you just have to skin these hard, slick surfaces head on: read, straight up. Sidehilling produces minimal traction and terrible strain on ankles and knees. This all gets exhausting, fast, and tired legs on hard surfaces will more than likely lead to slipping and falling, or at the very least, a lousy start to the day.
I’ve noticed that in general, skiers tend to struggle less in these conditions. I think a lot of this has to do with the stiffer connection hardboots provide in tour mode. Softboots, paired with the wide decks of splitboards, means side-hill skinning in these firm conditions is less effective and more stressful.
Also, splitboards have a different edge for the uphill and downhill leg, where the uphill, straight edge, provides much better traction than the lower leg.
On numerous occasions in these conditions, I’ve been delighted to whip out the ski crampons and scoot up the hard lower slopes without much ado.
While one could argue that, again, booting might be effective here too, I’d say, probably not.
If you’re climbing, you will likely soon enough get above the supportable surface conditions. This means you should begin to encounter more breakable and soft snow. As this happens, ski crampons might not be as helpful, but they also shouldn’t be a hindrance (unless you have to drop down something sizable), and eventually you can pop them off.
Booting would work on supportable conditions for sure, and more than a few times, I’ve just hiked through icy or thin-covered forests to reach better snow above. As soon as you have any kind of breakable or soft snow, though…have fun booting, its time to get the decks back on.


The last part of all of this is the performance of ski crampons available to splitboarders.
So far, I have to say, I’m really unimpressed, with one exception. I’ve used crampons for Voile, Spark R&D (Mr. Chomps for the Burner), and Karakoram (Split30 system).

Here’s the rundown:
Voile: Voile has a smart system that can either be fixed to the split ski for full time traction, or fixed to the binding for improved efficiency while skinning.
Downside: You have to take the bindings off to load or unload the crampons regardless of whether they will be fixed to the bindings or the decks. While the Voile crampons have a lot of tooth so to speak, they are thin, and beveled both forward and back. I have no idea why they would do this. Lastly, they require a separate set of longer pins for connection.


Spark R&D:
Smaller and more compact than Voile, they are also theoretically loadable on the fly.
Downside: They feature a smaller tooth length than the Voiles meaning they provide less bite with the risers up (why would you need teeth if you weren’t climbing?) If you use Voile touring riser blocks, they will barely reach the ground at all. They aren’t actually fixed to the ski or the binding. They rely on a small heal riser on the crampon itself, and the weight of the rider to keep them depressed. As a little guy, I struggled to get any bite with mine on hard surfaces. I’d prefer if they were fixed to either the ski or the binding for a more consistent bite. While they are theoretically loadable on the fly: good luck. If you load them on flat ground that works, but on any tilted terrain, it’s pretty tough. The thing is, the moment you realize you need crampons is rarely at the base of a slope. Given this last point, I wish that Spark would consider doing away with the useless heel riser, and instead mount a small puck so the crampons could be fixed to the binding.


Karakoram: I loved Karakoram’s crampon system. I still miss it. The crampons had ample tooth length even with touring mount risers, were truly attachable on the fly, lightweight, and mounted directly to the binding (read: consistent bite). I never debated whether to bring my Karakoram crampons with me, they always just came with, and I used them often. Admittedly, they also lead me to the conclusion that they might cause for some poor decisions-making on routes.
Downside: If it mattered to you, they couldn’t be fixed directly to the decks.


Bottomline:
If you’re thinking about ponying up the $100 for a set of splitboard crampons, seriously evaluate how much you think you will use them. How often do you encounter the conditions described herein? What binding system are you using? Are you willing to tolerate some tougher skinning for saving $100?
Posted by Dante at 10:27 PM