Psst. I have a secret. I kind of like fall in Southcentral Ak.
It’s an acquired taste for sure. Perhaps not the sweetest of autumn vintages – can anything compete with Indian summer during peak foliage in New England?
Alaska fall is not something that can, or should be consumed in any great quantity, but it is sweet, even if not long to be savored.
Sometime during the endless daylight of the summer the solstice, I awake from sleep – already a scarce commodity – and lay awake in the burning light of 4 am, having just dreamt that the short summer had already ended, and darkness was returning. It’s part a horror, part a wish.
This summer was hot, dry, and awesome. I got a lot of time in the saddle. Too much? As the day’s waned, and nights grew, I had to admit, I was looking forward to a break, and a change in pace.


Res-Devils
I caught two great rides on the Kenai with Nathan A. First on the list was the Res-Devils Loop on the last weekend and the last Sunday of August. Both of us had just wrapped up from the Trifecta races, so the legs were tired, and some very light overnight showers Saturday put a dusting of snow on the ridgelines and provided plenty of inspiration.
Despite this, the trail was still dry, and while there wasn’t much foliage to speak of down low, colors in the passes were approaching peak. 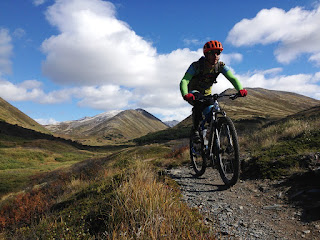 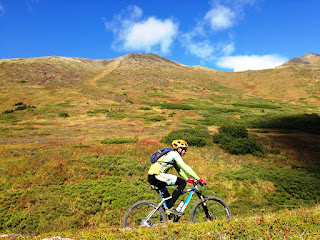 Russian Loop
I expected to spend a bit more time on Russian this fall than I ended up realizing, so in retrospect, I’m really glad we snagged this ride over Labor Day. The weather wasn’t particularly stunning, and admittedly colors weren’t quite peaking yet, but with this trail fully brushed out, it was hard to complain.


Running
The fact that I run is a well-kept secret. I actually run quite a bit for someone who identifies as a cyclist. That doesn’t mean I’m strong, or fast, but there are some great over-land runs to be had in AK, and this is my time of year to branch out. I hadn’t been on Summit Creek Trail since 2013, and hadn’t been over the Summit Creek/East Creek Pass since 2009. Adam was an awesome sport and joined me for a run to the col between East Creek and Resurrection Pass. From there, we turned southward and followed the ridgeline upward and eventually back around to a high col the leads to a hidden tarn just a bit below and east of the East Creek/Summit Creek Pass.

Crow Pass Skiing
A typical wet fall storm parked over the region early in September delivering rain for 13 days straight. Somehwere toward the end of that deluge, temps dropped and snow started stacking up above Hatcher Pass and Crow Pass. I knew the window might open, and on Friday the 18th, I slid my bedroom shades back, planning to go to work, only to be greeted by blue skies and an incredibly low snow line.
I was grateful I’d put my ski gear away ready to go, and quickly packed my bag and went down to the garage to scrape the off-season storage wax from my bases while scarfing down eggs and bacon.
There were a few inches of sopping-wet snow clinging to the leafy alders at the Crow Pass Trail Head, and I needed my storm shell to keep dry as the warm morning sun turned the trail into a cold, wet, collapsed alder obstacle course. I was stupid enough to beat anyone else up to the pass, and from the waterfalls upward, ended up breaking the skinner in about 2 feet or more heavy fresh, underlain by a solid but saturated base. Clouds moved in as I climbed, but moved in and out at rapid intervals, providing easy windows to ski through. A few others showed up later, and I ended up doing two runs. A third would have been nice, but I didn’t have confidence the clouds would keep up their intervals. I skied all the way back to the top of the falls without tagging a single rock: Easily the deepest skiing I’ve done in September or October. 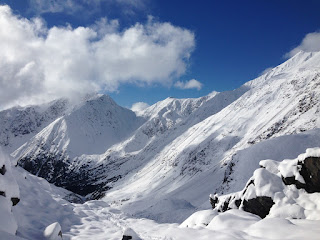 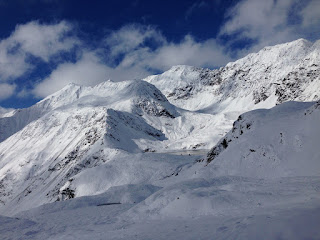 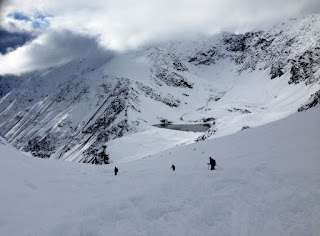 Burma Road Loop
I really enjoy road riding in the Valley during the shoulder seasons, but I’ve stuck to Palmer and Butte on these rides. I’d wanted to check out a loop in the Knik/Point Mackenzie/Big Lake area that included a long chunk of dirt on Burma Road. I’d Burma was a good road, and Phil was up for an adventure. As with most other Valley riding, it was really pleasant. We parked at the Wal-Mart, and traffic was pretty light, and generally very respectful. A lot of the main roads in the valley have parallel bike paths, but unlike Anchorage, where these paths cross hundreds of driveways and side streets where the right-of-way is ambiguous, in the Valley these intersections are far less frequent. That being said, theese paths also tend to be covered in loose rocks kicked up by ATVs and quads, so they can be a mixed blessing. Burma Road itself though was excellent: good flow, narrow, rolling, winding, and well packed. There were two very large puddles at the south end. Phil, on his cross bike, rode through both. I was on the road bike with its 25C slick tires, I made it through the first but portaged the second. Other than that, both bikes were equally adept at this ride, though it was pavement heavy, and I think slicks and taller gears were optimal.

Cyclocross
I’ve been helping out with the Arctic Cross cyclocross race series the past few falls. I don’t have a burning desire to race cross for a number of reasons excuses, starting with the fact that I’m a wuss; but I do like watching cross racing since you can often see a good chunk of the course from a single point, and more importantly, I like hanging out with my friends. We added an event this year so we now have three adult races, plus a short kids race, and cross has gone from being a half-day event with maybe 50 people to basically a full-day activity with 125-200 entrants!
One day, for giggles, I stuck my Garmin in my pocket and let it run while I, umm, ran around, setting up the course, timing, and taking the course back down: I logged about 6 miles over 6-7 hours. It was neat to see. Fortunately, a lot of people pitch in, otherwise that number would be a lot higher!
Photos from the season: LINK


Do nothing
As winter turns into spring, the days get longer, and so with it, the activity list. Some of the biggest ski missions of the year come by a defacto in March-May thanks to better weather, deeper snow, and the need to chase that cold and deep snow into the higher elevations. At the same time, road riding, and soon enough, mountain biking ramp up and there’s a pressing need to start putting in more time on the saddle. Suffice to say, the spring shoulder season isn’t really a shoulder season at all. I’m OK with that, but I’m a firm believer in doing a big-block recovery, and I’m not talking about a recovery ride or mellow day, I’m talking about a real block. Some folks fret about how boring fall is here and how there’s nothing to do. I say: embrace it, take a rest.


Get out
The leaves have dropped, the sun is noticeably lower, but the snow line seems stagnant. Get out of town, get out of state, get out of country…more on that later: