It took my former riding buddy and college teammate Tom 7 years to make it up to AK for a bike ride.

OK, in fairness, Tom has been living and working in some of the country’s most scenic and spectacular National Parks though out those years.
Still, Tom and I went 6 whole years between our last ride on the east coast at Kingdom Trails a day or two before I left for the north, and our eventual re-union in SoCal last fall.
A few months later, Tom gave me a pretty awesome tour of Yellowstone National Park when I was visiting the area last January, and when I finally got him to commit to a visit to AK, I knew I had to pull out the stops for his visit.
Initially, I had thought a road trip to Whitehorse, followed by a short trip to the Kenai for some fishing, was in order. The road trip would provide a great view of the giant state, and I’ve yet to hear someone say something disparaging about the Yukon riding.
We did have some time limitations though, and despite this being an epic summer rarely wetted by rains, Tom of course picked the one week rain seemed sure to fall.
Multiple sources said the Whitehorse trails rode well in the rain, and I don’t doubt that, but driving 24 hours roundtrip to ride and camp in the rain just didn’t add up, especially considering how dry the trails where here.
I decided we would roll the dice and stay local, ride in the rain if we had to (we did), but at least have access to hot showers, an indoor hangout, and local knowledge of the weather patterns and trails (hey, we also did).
Aside from all this, I can’t help but feel boastful of the ScAk trails, and wanted Tom to see them, not some system a full day’s drive off.
Without question, that was the right call.
The first two days of Tom’s trip were gray and wet. We rode Hillside in the rain, and splashed through puddles in Kincaid during a couple hour lull in the precip the following day. The nice thing, is that as noted, the trails were so dry this year, they never got muddy, and dried instantly.
By day three, what had been a gloomy forecast began to change: the sun was coming out, and conditions were looking to be spectacular.
I wanted to take Tom up to the Valley and ride Keppler-Bradley and GPRA, but the storm system was lingering in the north, while gorgeous blue skies broke over Anchorage.
For the first time in days, Tom saw the Front Range, along with the snow-capped Tordrillos across the Inlet.
As it turned out, Anchorage was not secretly located near Fargo, as Tom had been beginning to suspect.
We rode Kincaid again, joined by Joe. As I expected, Tom loved the trails there, and didn't mind hitting them twice. 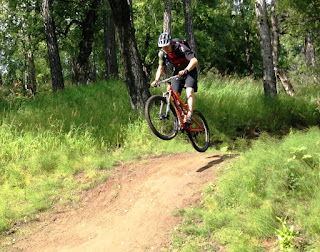 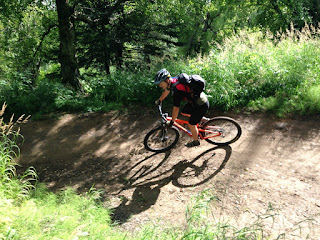 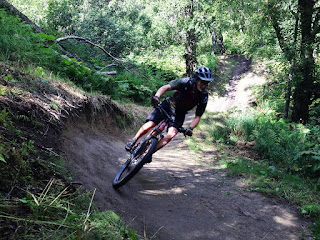 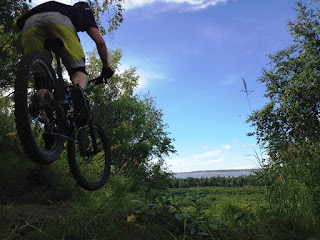 The next day Tom and I loaded up the Suby and headed south to base camp at Braun’s cabin and ride the Kenai.
The Chugach National Forest had just finished brushing out the Russian Lakes Trail the previous week, bringing this normally spring and fall only trail into the fold waaaaay early. I explained to Tom beforehand that this was a real bonus to have this ride on the table in mid-August, but I’m pretty sure he would have figured that out on his own as I freaked out about a dozen times on-trail.
We rode the Russian Loop, and as hoped, the well-drained trail was mud- and veg-free. When we passed where the trails runs along the river bank around mile 8, we could see hundreds of bright red sockeye swimming in the current below. 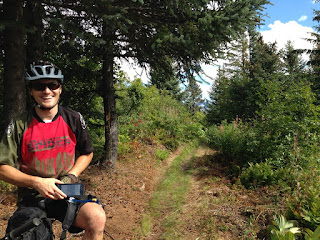 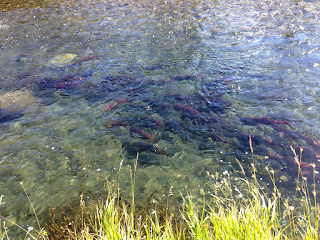 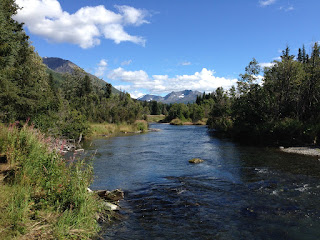 The next day we headed toward Seward to do the Lost Lake Loop. Again, we had perfect blue bird skies and a gentle south wind to keep it cool.
As we finished up the 7-mile Primrose section of the Iditarod Trail, I asked Tom if he wanted to take the straightforward and easy route down the highway to re-connect with Lost Lake Trail, or go ride the Bear Lake section of Iditarod – explaining that the latter was hilly, loamy, not always flowy, and that a 2,000 foot climb still lay ahead.
Tom gave me a confused look.
I tried again: “Easy or hard?”
“Hard,” Tom said.
I was stoked. I know a lot of people pass up on this section, but that’s really their loss.
We stopped once on our way to Bear Lake to gobble up the abundant and fat blueberries that lined the trail, before making the surfy descent into Seward. The shore-side segment of the trail is super technical, and I knew Tom was probably going to want to session some of the features.
He agreed that this stretch is probably the closest thing in Alaska we have to the type of riding he and I did in college, at least, as far as the density of technical features.
As we neared the south end of the lake, we passed over the small inlet stream, and hung around a while to watch up and close as salmon battled each other for mates.
A little while later we were riding high into the alpine of the Lost Lake plateau.
Big shocker, but this did not disappoint. I think my favorite moment was when we reached the top of the plateau just before the lake comes into view. Tom took a ton of photos to the south toward Resurrection Bay.
I let him make a couple comments about how spectacular the view was, and how it couldn’t possibly get better, then we rolled 100 yards across the flat plateau until the lake and the bay were both in full view. I had to ask if he was sure about they view.
Post-ride fried halibut to-go, enjoyed down by the water was in order after descending Primrose. 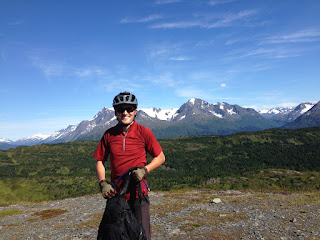 Friday dawned with high gray clouds, but the forecast only hinted at a slight chance of rain.
I had really hoped to do a Devils-Cooper shuttle, but could not arrange a shuttle, and doing the loop wasn’t too high on the list after five days of consecutive riding. The backup plan was to ride up Devils and through Res to the Hope overlook, maybe descend to East Creek if we had the legs, and then turn around.
The weather had other plans. Hypothermia rain started to fall right as we got to Devils Pass, and knowing the Hope overlook view would be pretty unspectacular, we decided to go hang out in the shelter of the Devils Pass Cabin for a while.
As it was, the rain really wasn’t falling too hard, and it didn’t take us long to descend out of the wind.
After 3 days of AK blue bird, Tom said he appreciated seeing a slight dose of reality in terms of what the weather could dish out.
The trail was great even wet though, Devils is already well drained to begin with, and given the dryness this year, didn’t even form any puddles.
We headed to fish camp that evening to spend Saturday working the UR fishing event. The tournament went smoother than it ever has, and I appreciated Tom’s willingness to chip in and drive a shuttle. Tom got real familiar with my old commute to work (I mean, he’s fairly qualified at driving vans after all), all in return for a little fresh halibut and salmon. Good deal huh?
That evening, just before I was about to call it a night, walking through the dark between one of the out buildings and the lodge, I looked up to see the northern lights blazing across the sky. I ran in and got Tom up, and we hung out on the dock for an hour while they put on a hell of a show.