Part 1 (LINK)
July Fourth weekend, it’s Anchorage’s favorite weekend to load up all their toys into a vehicle coupled to a trailer, neither of which may pass a basic mechanical inspection, and hard-charge it down the Seward Highway, making 8-car passes on inside corners, until eventually, someone blows it and shuts down traffic.
Is it any wonder why I always hope for rain or an excuse to stay in town this weekend?
Solitude is a hard-to-come-by commodity anywhere on the Peninsula this weekend, but that’s not always the point.
My wishes for rain or clouds denied: brilliant blue skies dominate, and I can’t resist either, so I take off on the Lost Lake Loop.
It is assured, the name-sake trail in this 34-mile ride will be an absolute zoo.
As I climb from Seward, a hiker tells me: “We need to limit the number of bikers on this trail.”
“I could say the same thing about hikers,” registers in my mind, but oxygen debt and a limited ability to maintain the moral high-ground inhibits a response…mostly oxygen debt though.
I wonder why it is that she tells ME this, I’m slowly climbing by.
I can’t help but empathize with her a bit though.
I’m legitimately nervous that I will get nailed by a descending rider on some rent-wreck junker of a bike 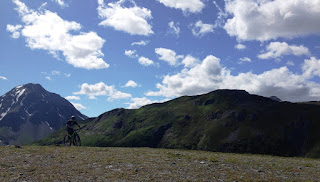 (Edit: this almost happens a few weeks later when a rider comes careening down the canyon section just below tree line on a mid-90s vintage hardtail replete with rim brakes and an 80mm elastomer fork. Unable to stop before hitting me, I duck into the adjacent hillside, and the rider ended performing a complete cartwheel off the cliff side. He was lucky the vegetation that arrested his fall didn’t impale or twist him up too bad. No helmet on the joker either).
I feel like I’m making more noise than some of the descending riders, and that whole “uphill has right of way” rule seems lost in the blooming cow parsnip.
The funny thing is, I’m more nervous on this climb than I was an hour or two ago when I started to head down the mossy section of the Iditarod Trail that leads from the Seward Highway in Divide to Bear Lake. 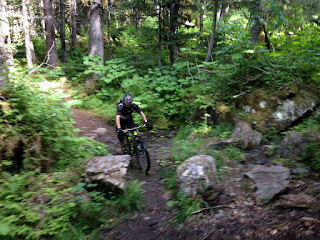 I passed a surprisingly large group of hikers very near the start of the section – surprising because I hardly ever see people on this trail – and they warn: “There’s bears at the lake!”
I ask “what lake?”
I get confused stares in response.
This is really helpful, as there aren’t many lakes in this segment of trail, nor bears for that matter: I mean, there is Troop Lake about a mile or so in – which is presumably where these people are headed, but I will skirt; and there is of course, the very “beary” Bear Lake, 7 miles down the trail in Seward, where I’m headed; and then there are maybe 3-4 other bodies of water I’d probably describe as ponds between these two bodies of liquid, but maybe they’re lakes with bears too?
The thing is, I sometimes joke, this section of trail was actually cut by the Feds for the bears. As noted, I almost never see people on it. Fat and plump blueberries grow abundantly here, and blue/purble bear scat litters the trail from mid-July through August. Closer to Seward, Bear Lake, which I don’t think got its name because of its oblique shape, is the end run for thousands of returning Bear Creek salmon with nowhere to go and nothing to do but die and present their protein-rich bodies to those who might wish to feast upon them.
All the while, the dense, old-growth forest makes this a lovely corridor to pass between Resurrection Bay and the Snow River drainage, if you’re into hanging out in deep, dark, quiet forests – kinda like bears are into.
So yes, this is really helpful beta: there could be some bears, by the lake.
I’ve been thinking lately, we actually need a sign at the narrow isthmus between mainland AK and the Kenai Peninsula that says: “Caution: Bears ahead at lake.”
What? It wouldn’t be wrong.
Neither were the hikers though.
Guess what I find at Bear Lake? Yup. Momma and her 3 millennial cubs out for a stroll.
These cubs are all just about as big as momma, and after the instant fear has washed away, I think, in retrospect, those cubs need to move out already.
Maybe they’re still perfecting their artisanal fish carcass sculpting?
It could have been a bad situation though. The section of trail along the steep east shore of Bear Lake is tough: technical, lots of blind corners, dark, and ledgy.
I even had the thought, moments before I interrupted this bear family’s outing: “What if I dropped into one of these blind descents, or came around one of these ledgy corners, and came face to face with a browny?”
If I had any time to react at all, my only exit option would be to leap away from the steep hillside into the thickets of devils club and alder below, hoping the bear deferred to better judgment and didn’t follow suit.
I’m lucky I spot them down one of the few stretches of trail with a good sight line, maybe 50 feet. Even still, mom huffs, and she hesitates before turning tail. The three cubs struggle to turn around on the narrow trail to flee, clumsily bumping into eachother.
Had it been a closer encounter, they might have realized they had good odds for a beat down.
Admittedly, I was shocked.
I’m used to seeing a lot of bear sign on this trail, especially later in the summer when the blueberries are ripe and the shores of Bear Lake wreak with the stench of rotten salmon.
The blueberries were still white though, and the fish had yet to make a strong showing at the lake, or, at least start dying by the hundreds.
More, it was 1 in the afternoon on a bright sunny day.
Not really when I expect to find a family of bears out and about.
I guess that’s just it though: In the new wilderness, and the old wilderness, it’s never clear what the dangers will be, it’s just how different the dangers actually are in each, even if the two can exist in the exact same place.