The Old Wilderness: It’s remote, abandoned, desolate, cold, lonely, and ruthless.
The New Wilderness: Can’t find a parking space at the trailhead; can’t get good 4G/LTE coverage to Twittergram or Tinder; don’t make eye contact with all the others; just stepped in dog poo in my brand new hiking sneakers; screw this, I’m calling the chopper.
If these two wildernesses were overlayed on a map, surprisingly, we’d see they often sit atop each other.
When I moved up here, friends and family from Outside were convinced I’d end up dead from cold, starvation, getting lost, and consumed by some beast – possibly all of these things happening simultaneously in one calamitous demise.
That’s because I was obviously off recreating in the Old Wilderness – in their minds.
The New Wilderness is no less ruthless though.
On any given weekend, in the “near-country” of Southcentral Alaska, you can find yourself locked in the jaws of either of these wildernesses…it’s just hard to say whether those jaw will resemble that of a 15lbs Schnauzer or a 1,500 lbs grizzly…that’s kind of (emphasis on: kind of) been my summer in a nutshell.


One weekend back in late-May, I go out on a solo 45 mile out-and-back on Russian Lakes Trail, determined to crack my previous best time for this ride as conditions are optimal. With 14 miles to go, feeling good, and on track to bust the old time down a peg, an errant stick shoves the rear derailleur into my wheel and it’s ripped off my bike so violently it leaves a chunk of bolt sheared off in the frame and flings another chunk of the former gear-shifting assembly deep into the high grass where I can’t even find it.

Without locomotion, I neutralize my gears and clip the kinked chain down to size to single-speed for a mile or two before it eventually over-tensions and the chain explodes. I proceed to jog the remaining mileage out, coasting what little terrain I can, and power-hiking the rest. My carbon fiber-soled cycling make this way more enjoyable than it sounds.
I’m reminded along the way: this is why I start these longer rides earlier in the day. I’m, also reminded: this is why, as much as I dislike running, I run every week, and make those runs hard – by a cyclist’s standards anyway.
These are the only two ways to “prep” for this situation, other than bringing a new derailleur, derailleur hanger, chain, and power drill to tap out the sheared off bolt. I guess you could also only ride a single-speed, and then you may well develop tendonitis too.
Basically, the risk of riding these longer trails all the time, is there’s always the risk that you’re going to be out for a lot longer than you plan.


As the end of the tunnel draws near, I begin to think: “this wasn’t so bad after all,” (endorphins talking) when I cross paths with two backpackers and the three dogs accompanying them.
One of the dogs, a sheepherding-looking thing, decides it doesn’t like me on this trail, or near its herd, or both.
This dog and I already met this morning. He/she didn’t like me then either, but stuck to aggressive barking and snapping.
This time around, the dog is still off leash, and I’m not as lucky: he/she/whocares grabs my ankle, leaving two small punctures and two small slashes.
Go figure I’d get bit by a dog today.


Again, what can you do? I have a med kit. With the dog restrained, I pull out some iodine pads and clean the bite the best I can. I’m close to the car, and in less than an hour, I will clean it further with alcohol wipes.
I pull out my phone and ask one of the backpackers to provide an ID so I can get a snap shot of it.
If the bite is infected, the doctors will have to record it as a dog bite and file a report with the authorities (a colleague went through this ordeal).
They oblige, and I can tell they are concerned. They apologize non-stop. They promise they were just about to leash the dog, its not there’s, it’s a friend's, it’s an abused rescue, the list goes on.
I love dogs, but I have every right to be irate with them: the dog already demonstrated over-the-top aggression this morning, they are nearing a very popular hiking area as they get closer to civilization, and (ME!) I’d been planning to camp this weekend, but would be hot-and-bothered about it now.
I have other things on my mind, and yelling won’t satisfy anything. It's not even in the top-10 on things on my mind right now.
The backpackers seem genuinely remorseful, that's about all I really expect. In the back of my mind is the irony that on this trail, most folks would expect to get mauled by a bear before they’d get bit by a dog.


A week later, I’m back, looking for redemption on the same ride. The weather has changed, and the blue skies and 70 degree temps have switched to gloomy gray with passing showers with highs in the upper 50s. 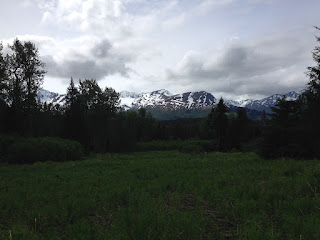 I stuff a rain shell into my pack, but look at arm warmers and decide I will really only need a shell if I need anything.
I head out, and though I get sprinkled on here and there over the course of the next 5 hours, it’s never enough to justify the shell. The temps though…they justify some insulation, especially in the higher elevation section of this ride. Not terribly stupid, but definitely dumb in the scheme of things.
For two hours I ride without seeing another person. The weather has clearly kept people away this week compared to last.
I’m hardly alone though. 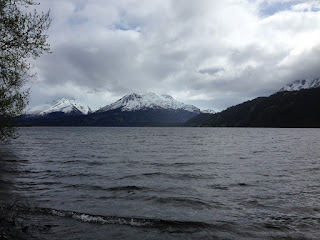 For the last three weeks I’ve been riding in this valley, and for the last three weeks, I’ve seen virtually no signs of bear.
This week, their sign is everywhere.
I like the silence though. When I’m riding with others, sometimes I hope to see a bear. In 7 years of riding the Kenai, I’ve seen only three of the brown variety. I’ve seen a lot more of the black variety, but they are a fearful animal here, a prey species that survives by staying low or running fast.
Seven miles in, dozens of feet from the trail’s namesake river, surrounded by a dense wall of willows and spindly spruce, the vegetation explodes to my right.
A brown bear, probably confused by the combination of noises from the river and the bike, all muted and warped by the dense growth, charges first toward me, before wheeling back around.
I see only the brown flash, and know to hold my pace steady as the noise subsides.
I flip several glances over my shoulder, and am relieved the bear is not in pursuit.
“That was close,” I think, as I up my pace a titch out of nervousness.
Less than 10 minutes later the trail has entered a beautiful stretch where it winds its way through a mosaic of cottonwood stands and open meadows
I cross a bridge Adam and I once treed a chubby black bear on.
Into a field, the trail sweeps left. Two, massive, blond shoulders are just visible above the handle-bar-high grass, ambling about 30 feet ahead and closing.
“WHOA!”
It’s all I can think to say in the moment as I stand up on the pedals and squeeze hard on the brakes.
The massive head attached to the shoulders flies up from ground level, eyes wide.
We lock gazes for a fraction of a second, but the bear is already wheeling back to run.
By the time I realize how close we were, and how bad this could have gone, he – and I’m assuming “he” since there were no cubs – is already loping 50 feet away down the trail; flipping glances back.
“That. Was. Way. Too. Close.”
I’ve easily been as close, or closer, to brown bears of similar size a few times before at the fishing lodge.
You knew what the bear wanted though: spawned out salmon, or the remains of filleted carcasses it could fish out from the river bed.
“Stay outta my way and we all get along,” was the MO there.
Out here, it’s harder to guess how an encounter will go, and in the end, they’re better to avoid.
I stop, but it seems that a large fraction of the insect entourage that was accompanying my fellow trail user has decided I’m just as tasty.
I look at my bike computer’s clock, and think I should hold for 5 minutes. After hardly 2, the swarm is too intense.
I ride on, somewhat reluctantly, but am now in full-on noise-making mode.
I count to 10 in my head on the flats, 20 if I’m climbing, and belt out a loud “HeyOhh.”
I should have started doing that as soon as I set off alone. I should have started doing that as soon as I noticed how much more sign there was this week. I should have started doing that as soon as I saw the first bear.
As if to prove the point, not twenty minutes later, riding through a scenic, pastoral meadow on the Upper Lake’s south side, I see the blond rump of the third bear of the day bounding a good 50 feet or more down the trail.
This one got the advanced warning, like so many others I probably never see.
Up to today, I may have only seen three brown bears in thousands of miles of Kenai rides, but I’m not stupid, I couldn’t even begin to wager a guess at the number that have seen me.
It’s the last brown bear I’ll see today, but not the season.
Posted by Dante at 10:11 PM