The bike throw: the culmination of an exasperated attempt to keep a bike running, tuned, and useable, that ends with expletive language, a rider-less bike in flight, and perhaps a new bike not too long afterward.
I actually don’t remember the last time I threw a bike, or even had to suppress the urge. I suppose that’s a good sign.
I do recall one of my more memorable bike throws though, and I think it sheds a little light on what can drive a rider to the “hucking point,” and how the bike’s mechanical integrity is only part of the picture.

Time machine: July 2005.
July in the Northeast sucks: it’s ridiculously hot, humid, and dominated by downpours and thunderstorms that roll through at random intervals.
I was living on my own for the first time, sharing an upstairs apartment with a friend. The apartment was situated at the corner of the busiest intersection in Saratoga; it was hot and noisy all the time.
I had two jobs, both 10-miles away, in Schuylerville. One of them was theoretically really cool: working on a river boat on the Hudson. It offered a few hours of work a week at $6.15/hr. The other job was making cheap, greasy pizza. I was paid a little better, and in cash under the table, plus tips, but I worked late and came home smelling pretty gross. I was learning some life lessons, and hemorrhaging the meager savings I’d built up since high school.
The so-called real world was, a month and a half in, not what I’d hoped it to be.
I was also riding my face off, and almost every weekend that summer I loaded the Suby and headed as far as 3 hours away to race.
I still didn’t road bike yet, although, by the end of the summer, that would change. My two mountain bikes were taking a lot of abuse.
It definitely wasn’t a dry summer either. More than a few times I was caught out in the downpour.
That sucks anywhere, but the cold, quartzite rollers, spines, and ledges of the Stables trail system where I logged most my time are smooth and slippery when dry: add some humid rock sweat or rain, and they take precision riding to a whole new level.
In an attempt to beat the afternoon thunderstorms, and get a workout in before heading off to make cheap pizzas, I typically rode in the mornings.
I had just picked my Marin up from the shop a day or two ago after it had sat there for over 2 weeks (way too long) getting it’s practically brand new Manitou Minute worked on. It was clear within a mile, it still wasn’t fixed.
For some reason, the events of the 7/7 London bombings were weighing heavy on my mind. I don’t have a good reason as to why. I’m sure when the Bulgarians I worked for at the pizza place didn’t have the satellite TV tuned to a soccer match, it was blaring news of the god-awful and graphic stories about the attack.
It was probably 75 degrees when I rolled out, and 250% humidity.
Everything was wet and greasy. I’m sure it had rained the night prior too.
I’m also sure I wasn’t cleaning many lines.
I came into a 3-foot, smooth, uphill ledge. The trail made a 90-degree corner with a cross-root mid-turn before hitting the ledge. To clean this, you had to make the corner, rolling the root at the exact right spot so you didn’t slip the front wheel or catch the back; and set up the wheelie.
I had the requisite speed, and as I pulled the front wheel off the ground, I saw the bright, orange silhouette of a red eft, clinging to the cold rock, exactly where my back wheel would seek traction. 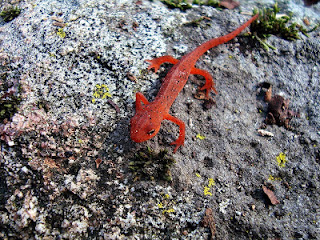 I pushed by body weight left, and as the back tire hit the slippery rock, off angle, I heard the terrible shriek of rubber spinning over wet rock.
In an instant, an attempt to counter-balance the off-kilter bike left the tire kicking out hard to the left while I fell hard to the right.
I slammed my left shin on the top tube and right knee on the cold rock, before rolling into the soft, forest dander.
In a blind fit of rage, I unclicked my feet from the pedals, grabbed the bike by its grips, and flung it as hard as I could into the woods.
The Marin sailed through the air and crashed into the woody undergrowth.
At the bottom of the ledge was the eft, crumpled into a mutilated, dirt-stained, orange ball.
It was all for nothing.
A flood of emotion rushed over me, and I bent over and started to sob like I'd never cried before. It just hurt, and I didn't know why, but it felt good.
I remember thinking briefly about someone finding me in that sorry state, but it was 10:30 in the morning in the middle of the week in the middle of the woods. That wasn’t going to happen.
It wasn’t the eft.
It wasn’t bruised legs.
It wasn’t even that mechanically doomed Marin (I can’t remember, but I’d bet I bent the hanger in the throw and had lousy shifting for the rest of the ride.)
It was kind of just, life, in that moment.
Sometimes, you can ride through the obstacles life throws at you. No matter what seems to be on your mind, an hour or two on the pedals promises respite, relief, and diversion.
In this case, I found all those obstacles and more on the trail to be too much to handle, and I finally snapped.
I remember soft pedaling much the rest of that ride, walking more than a few features rather than even trying, but I somehow, surprisingly, felt content.