Another year, another RDJ (2014) (2013), another twist.
Last year, I literally couldn’t wait to knock out this loop.
This year, I was ambivalent at best. I had a new plan for a big, late-spring loop, CRReD: Start at Devils Pass TH, head down the road to Tern Lake and take Old Sterling Highway to Crescent Lake, out-and-back to Crescent Lake, onward to Snug Harbor Road, up the 14 miles or so of gravel on Snug, “down” Russian Lakes Trail, across the street to Resurrection Pass Trail, and hang a right one-and-a-half dozen miles later on Devils Pass Trail to close it all out.
I think the CRReD loop would have totaled up to about the same mileage as RDJ (~90), but where the latter sports something like 30 miles of pavement (albeit, mostly on a scenic bike path and the even more scenic Hope Road), CRReD would have something like 4 miles of pave in total, and would make all the rest of its connections on jeep roads, atv paths, and gravel roads.
Then the Kenai caught on fire. The south half of Resurrection Pass Trail was closed due to a 250-acre fire above Juneau Lake, and combined with the smoke of the Stetson Creek and Card Street fires, filled the Cooper Landing area with haze and smog.

CRReD was a no-go.
Johnson Pass, in awesome condition, beckoned, but there was this nagging feeling that I know I felt, and I think Adam did too, that with perfect weather and perfect trails, if the RDJ didn’t happen, not doing the RDJ might be a regrettable decision later on.
Out of curiosity, I rode the north half of Res on Friday to the Devils Pass junction, and found that smoke from the fires was a non-issue. I could hardly even make out where the distant fire was. 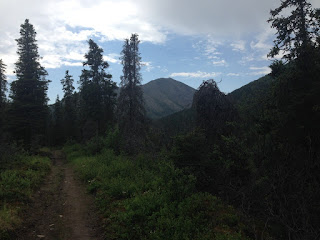 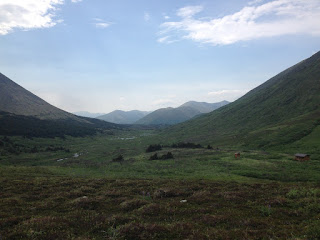 We went ahead and met at the south Johnson Pass trail head on the earlier side the next day, thinking we’d do it over-and-back.
With wheels on, and maybe a few minutes from roll-out, Adam looked at me and suggested a new twist.
We could park my car at the north Johnson Pass TH, and start the ride at the north Res TH.
The thinking was two-fold:


The car staging would eat up over an hour, but it was such an obvious win, we immediately mobilized.
The day turned out to be pretty well perfect. Low-slung clouds in the morning helped to stave off the heat for a little while. Eventually lifted and revealed brilliant blue sky. Trail conditions were superb; we got a wiff of smoke near the top of Res; and the veg on the south half of Johnson was a little unruly, but that might have been my only complaint.
We also saw a ton of familiar faces.

We hit the north Johnson TH in 6 hours. I think just a bit before we topped out on Johnson, I’d mentally committed to closing out the loop on my own, but I kept my mouth shut as it was kind of nice to have the option.
I actually felt really good when we got to my car though.
Adam retrieved some clothes out of the trunk, and I switched to my hard tail. If I’d known what the game plan was from the outset, I might have had the bike a little better prepped (lubed and tires at full pressure for road riding). With the option to use a lighter and more efficient bike, staged perfectly at the start of the long pavement section, not switching seemed dumb.
I stopped my clock for the 15 minutes we were in the lot. I don’t know how I feel about that in the scheme of things.
Basically, the next 2.5 hours turned out to be really brutal, and completely sucked, but, in the best way.
A few miles down the bike path, my hopeful tail wind turned to a steady head wind, and although it wasn’t too strong, it was persistent the rest of the way to Hope.
The bigger problem, was that I bonked, really hard. I have no idea why I didn’t have a bite to eat while I was switching bikes. I have no idea why I decided that since my clock had stopped, so had my metabolism. Regardless, I got nailed hard, and that deep into the ride, the margins were too thin.
I reached for a pack of shotblocks in a jersey pocket, but realized they weren’t going to act fast enough, nor be sufficient to get me out. A couple miles later I dug out the emergency Gu that lives in my pack.
As always, the e-Gu saves. My head stopped floating on the end of the balloon cord it was on.
While the road riding sucked, it was obvious my body had been good for the 60 miles/6 hours, and the additional 30/2 was what was going to make this ride count. As much as I hurt, and as brutally as my legs screamed the final miles on Palmer Creek Road, I was really glad I was closing it out.
That was kind of it. It was really uneventful. This was the latest start for this ride, and thus the latest finish, which was kind of nice as the evening air cooled a bit and traffic was very light.
I got to Adam’s car and shut the clock off at 8:30 total.
If I ran the clock through the transition, it would have been 8:45, which was last year’s time.
I guess that leaves some questions in my mind. If I’d stayed on my full suspension (i.e. 0 transition time), would my total time have been extended to 8:45 because of the bigger bike’s inefficiency?
Did I “cheat” by using a lighter bike for the paved section, and a big bike for the trail sections?
I’m not sure.
I think it probably would have been about the same. I did the whole loop on a hard tail last season, so I still got the advantage of having the light efficient bike on the pavement and the climbs on Res and Johnson.
I also don’t find my current full-sus bike to be terribly inefficient on the road.
In the future, I’d probably continue to complete this loop by starting and ending at Devils Pass TH (I just like ending really long rides by coming down Devils), but I’d also do this variation again, particularly if we had a similar situation. 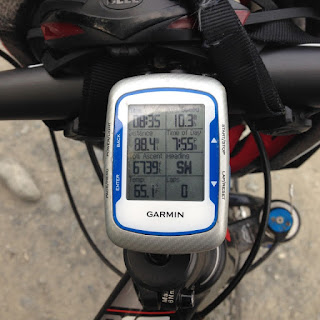