Digging for Treasure: A Brief Obsession with the Past

Alaska is a land of people who seem to be perpetually on the move. They come from somewhere else, pass through, view the country through their respective lenses, and often, in time, move on.


Alaska has also been a magnet of sorts for those in search of riches – sometimes monetary, sometimes perhaps more tangential.


More people have, and will continue to come in search of those riches, before moving on, for richer or poorer, in a cycle that seems endless.


It’s easy to lose sight of civilization, or its existence, in the mountains of Southcentral Alaska. It’s also just as easy to quickly be reminded that despite the ease with which quiet and solitude are found in seemingly empty valleys and ridgelines, these places have not always been so quiet, nor empty.


That’s Alaska in general though: no collective memory.


The historical record just doesn’t go that far back. Oral traditions tell tales through the millennia, but the written record only made thin forays beyond the Alaskan coast a couple hundred years ago, and more extensive history-keeping only began within the past century and a half.


This winter, for whatever reason, my appetite for hyper-local history of the eastern Kenai spiked.


During my first winters here, I read Alaskana lit voraciously. The books were broad, they covered the state, from the Aleutians to Eagle, from recent history to that of the first peoples who trekked here across a now-submerged land bridge from Asia.


This winter, I found myself specifically interested in the men and women who lived, worked, and died in the mountains I spend much of my time in on the Eastern Kenai during the turn of the last century.


I wasn’t completely unaware of this region’s history, or the names and places. There was a story here and there from something I’d heard or read, but I wanted more.


Luckily, Title Wave Books in Spenard keeps an entire Alaska mining history sub-section, and I snapped up what I could find on the area.


It’s not so much that I was curious about mining, and it was far from it that I was interested in broader Alaska history; I just wanted to read about people, in places I knew, with specific references to valleys, tarns, streams, ridges, and forests that I could still see, or at least imagine.


By far, the best and most comprehensive account of mining history on the Kenai comes Mary Barry’s book, “A History of Mining on the Kenai Peninsula.”


What I liked about this work, was its unromantic, second source format. Barry used records, and first person accounts, but generally refrained from editorializing, except for occasionally pointing out potential gaps or exaggerations of stories.


At times, the book is almost tedious, with year-by-year accounts of each mine’s activities.


At the same time, it’s a relief to step away from the constantly overhyped, overly weapy, obsession with Alaska and its grandeur.


Indeed, Alaska is a beautiful place, but how many ways can you call the sky blue?


There were parts to reading this history that were heartening, but also disheartening, for sure.


I loved when I could pin point a gulch, a valley, a lake: to know for sure, that the early pioneers saw the same thing I saw; to know how different it must have looked and felt to them; to only have rough trails connecting small outposts; to be made to feel alone by their surroundings, and yet to see the area grow.


At the same time, after three crushingly warm winters in Alaska, it stung to read of deep and persistent snow packs, of heavy ice, and of cold, without the typical hyperbole that frequently intrudes Outside Alaskana writing.


Pick up any magazine story, or the diarrhea description of one of the countless shallow and vain “reality” shows on modern Alaska, and one expects a land possibly as harsh or worse than what some faced over a century ago. It’s a lie, and anyone wearing shorts-sleeves on a hike in March can tell you that.


If you want evidence that Alaska’s landscape is changing, it’s certainly everywhere: visit one of the state’s accessible glaciers and look at the little markers showing the rate of glacial retreat, that’s understood, sure.


Maybe I knew, maybe I didn’t, but the snout of Skilak Glacier used to be visible on Skilak Lake?


Did Portage Lake ever freeze this past winter, or the last? Doubtful. Many know the story of the Portage Glacier retreating out of sight from the expensive National Forest visitor’s center that was built to take it in during the 1980s; when the first miners arrived to the region, there was no such thing as Portage Lake, or what there was, was a puddle.


In May of 1896, thousands of stampeders stomped about impatiently on the beaches of Kachemak Bay, waiting for the ice to clear from the otherwise choked Turnagain Arm. The vessels weren’t able to reach Sunrise or Hope until the end of May that year. There was ice in the Arm for all of about 4 weeks this past winter, quite similar the preceding two.


On the other hand, there were countless examples of places that haven’t changed. My favorite was a picture taken on the East Fork, perhaps in May, that showed Pete’s South in the distant background, with its same damn glide crack that shows up there every year.


I took away something about the people too.


At first, I was really disheartened to read the accounts of the early miners who arrived on the shores of the northern Kenai in the late 1800s.


Many were simply fools; mostly men who were either duped, or desperate enough, they gave up what savings they had or went into debt to trek north to a land they’d probably hardly heard of, for riches that were apparently plentiful.


You still see this today: the idea that Alaska’s treasures are both bountiful and easy for the taking.


Incredibly unbelievable stories about mountain streams filled with big golden nuggets waiting to be scooped up drove these men to a point of frenzy, buying up a season’s worth of expensive supplies and gear, storming ships and demanding passage north.


Upon arrival, most were greatly disappointed.


While we often think of the early pioneers as tough, resourceful, and enduring in the face of hardship, the reality was, a lot of those who came up in the first rushes of the late 1890s were anything but, and truthfully, had no business being in this wilderness.


They reminded me of that skier, flush with a brand new $1000+ backcountry ski set up, bright new goretex wear, but struggling like hell to make even a kick turn within sight of their car.


The blue bird, blower pow, the “AK velvet” so eagerly hyped and promised by the industry, does require a little work, and it doesn’t oft come easy. The truth is though, your average first timer AT skier, fresh out the doors of REI, is probably more prepared and motivated than some of those early miners were.


Many of the first stampeders sought passage back on the first boats for Seattle when they realized that riches were going to come the same way they did anywhere else: damn hard work and time.


As is well known, the people who fared best from the early days of the rush, were those who purveyed the goods, who sailed the ships, and who ran the mule trains and the lumber mills.


The miners who did strike it rich were often just lucky above all else.


My favorite case was that of A.W. “Jack” Morgan. In his memoires, Morgan explained how he was duped by a seemingly trustworthy doctor in Oregon who claimed to have traveled up the Susitna River to a rich claim. Morgan traveled to Alaska with a group including the doctor to their jumping off point in Tyonek. After three days, they hardly made it upstream of the mouth of the big sandy river before they realized their leader had never been to Alaska, there was no claim, and that they best part ways. Broke, Morgan bounced around Turnagain Arm a bit prospecting and working, before taking some work at a so far relatively unsuccessful mine on Lynx Creek. A turn of events lead Morgan to become a part owner, and the chief operator of the claim. He spent his first Alaskan winter at the mine, watching over his own and the adjacent claims, high in the mountains, hunting and trapping. Not long after Morgan took over, the mine hit its “paystreak” and Morgan cleaned up well. Morgan continued to live in Alaska for a number of years, before eventually returning south, but he seemed to be one of the few who came away richer in more than one sense of the word.


As I read deeper into the history of the region, I found, that, as time wore on, those who actually wanted to be in the area, were willing to stick it out, and like Morgan, found riches beyond the gold.
The Kenai was obviously not a great place to get rich. It quickly thinned those who were there to make a quick buck. Unbelievably, many of those same fools followed myth and rumor to the next rush. Those who stayed though, became the founders of the modern Kenai, establishing the communities of Hope, Sunrise, Seward, and Girdwood. The names of those men and women still stick to the sides of mounts or along seemingly forgotten claims and streams on USGS maps, or, for others, deep in obscure pages of history. 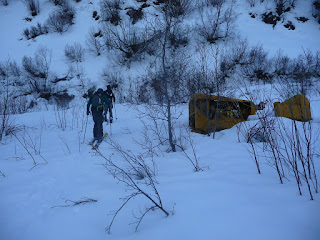