April 2016 started with a wash out. A planned weeklong trip to Thompson Pass got nixed when some of the best skiing and stability in recent memory was nearly destroyed as freeze lines and rain climbed to heights one might expect in late May, let alone late March.
Reports started trickling in though: there was hope. A Seward crew ticked off some great lines on Andy Simmons and Sheep mountains in the Moose Pass area, and skiing above Seward was reported to be good as well.
In a copycat effort on Simmons, I drove beneath LV Ray early one morning last week, and wondered why I wasn’t headed up Carter Lake Trail instead of the hot and sweaty Ptarmigan Creek Trail I ended up getting rejected on?
A week later, Nathan, Trent, and Kyle were onboard for LV.
LeRoy Vincent Ray, better known simply as LV, established himself as a prominent Seward lawyer, mining investor, Senate president of the first Alaska Territorial Legislature, and thrice the mayor of Seward. He financed a great deal of mining activity on the peninsula, something that became more critical as miners realized the key to success in the area’s was claim consolidation and more capitol-intensive mining methods.
Ray’s namesake mountain rises steeply to the north of the small community of Moose Pass, so steeply in fact, that without a sun roof, it is hard to take in the mountain’s slopes when driving below.


An aside, while the Moose Pass mountain, LV Ray Peak, may be one of the most prominent memorials to the Seward pioneer, it is interesting how, just as in his real life, Ray’s influence and work can still be found throughout the eastern peninsula. One of Ray’s most successful mining ventures was the Bruhn-Ray Mine on Canyon Creek at its confluence with the East Fork, one of the most active and long-standing mining spots on the Kenai. In the early 1990s, re-alignment of the Seward Highway threatened the remnant structures of the mine site, so some of the buildings – a barn, bunkhouse, and blacksmith shop – were relocated to the community of Hope, where they can still be visited today.


There are dozens of lines that would make incredible descents off LV Ray Peak, but given the progression of the season, our chosen line was the ~1,000’ run down the northwest face above Carter Lake.
For as big and prominent as LV may be, the whole day went by with so much ease it was almost a head screw.
We had a short 30-minute walk from the trail head up the switch-backing Carter Lake Trail before we reached snow line and clicked in.
We cruised up to and across the lake to a draw that divides LV with its neighbor, Madson Peak, and proceeded to go SFU on bomber crust – there was no side hilling to be had on this climb.
Eventually, the slope got steep enough that we switched to booting to attain the NW ridge, and then, alternated as necessary between booting and skinning along the ridge to hit the mountain’s north summit.
Nathan got hero of the day award, still skinning slopes the rest of us were booting, or patiently kicking steps through the stout sun crust ahead of us to make veritable staircases up the steeper sections.
As we closed in we began to find soft snow, and eventually got our first full view into the NW face, relieved to see that despite the stiff conditions on solar aspects, out descent route was going to ski nice and soft.
LV has 3 distinct summits peaks. We knew going in we’d be aiming for the lesser northern summit as that would set us up for the run – the true summit is out of the way for skiing the NW face. That being said, we were all thoroughly impressed by LV’s somewhat hidden west face, and the potential this face holds for a future mid-winter trip and actual summit descent.
We also got a nice view of Madson Peak’s north face too, which looked better than I imagined, and also well worth a return trip.
There are sort of “two” lines down the NW face. The most distinct is a couloir-like feature that hugs the east edge of the face. The “other” is a slightly diagonal run toward Carter Lake down the more open face, though depending on coverage, has a lot of different potential features and variations. I don’t think you can drop the north summit to the highway, it wasn’t really on the agenda, but I think it cliffs out. The central or southern summit knob would set a skier up much better for the long but chunder and alder-strewn run down to Moose Pass regardless.
Anyway, I got to cut the line, and slashed a couple turns to a convenient dollop 100 feet down. From there I could see the entire run, radioed up that I would go out of sight, and dropped in.
I judge a run by what I remember: the less I remember, the better the run.
I skied a bit conservatively, as I was expecting a harsh transition to heat crust. When I found the transition, it had a nice coat of soft snow over top and was very carvable, not harsh at all, and I was actually able to open it up a bit more once I hit it.
That’s all I remember.
Down in the sun I radioed up and the crew dropped in one by one.
We had made such good time, there was discussion of hot lapping the western benches for some corn harvest, but the stout crust turned out to be surprisingly more breakable once it’d been softened by the sun, so we opted to count our win and head out.
We were back at the car in 5.5 hours total.
Amazing. 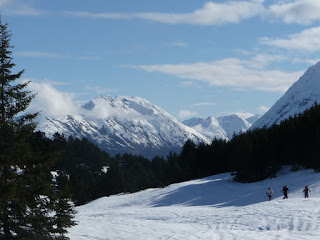 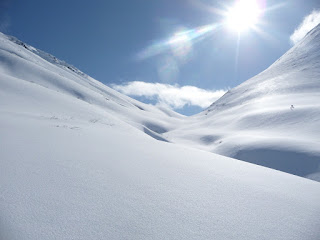 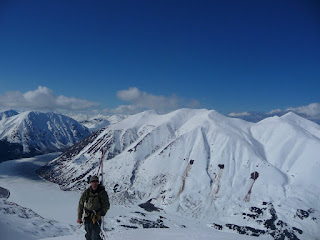 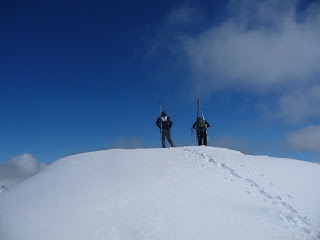 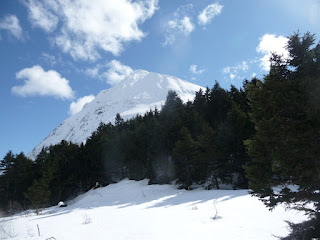