Nathan and I did this traverse again after a few years time since Phil and I jogged it in 2014. I had pretty good memories of that run with Phil, but surprisingly, I think I forgot as many details as I remembered. Nathan and I were lucky to score one of the nicest days of the fall: crystal clear skies, a stiff frost, and dead calm to start anyway. A cool breeze and high clouds worked their way in by the time we finished, but we were long off the ridgelines at that point. I suppose one of the biggest perks was that for much of the traverse we had frozen ground and frost withered vegetation, allowing us max traction on the grippy slopes and keeping out feet dry when crossing the normally soft and wet low sections.


The easy travel conditions sped up the traverse by a solid hour from 2014: we made it to Glen Alps in 6:45. Even still, that allowed us ample time to watch an incredible battle between a coyote family and a massive golden eagle; enjoy time on the summit of Bird Ridge Overlook, and lose about 20 minutes as we both comically sat separately in sheltering from a cool breeze at Ship Lake Pass, waiting for the other, not realizing the other was doing the exact same thing just out of sight.

We launched from the icy trailhead at 8:40, and held a steady pace up Bird Ridge, opening our pace into a jog higher up where the terrain allowed. We passed one couple quite high up the ridge who must have started well before dark. Around 11 we were aproaching the little pyramid of Overlook when we came across two sheep. As we jogged closer and closer, we spooked a large golden eagle we hadn’t noticed hiding behind a blocky piece of rock. The eagle swooped around the eastern side of Overlook out of sight and we joked how cool it would be to see the bird strike one of the sheep. 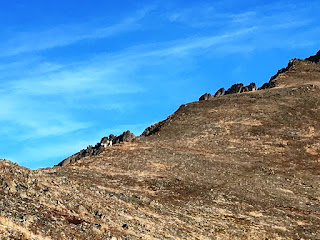 Ten minutes later we popped over the eastern rib of Overlook, and were suddenly greeted by a cacophony of yips and howls coming from the alpine basin below us.


At first I hoped wolves, but the pitch was two high.


Despite the ruckus, and the apparent closeness, we couldn’t spot the critters, and I began to wonder if maybe the animals were lower down in the brush, and the terrain was just amplifying their yowling. It seemed like there were two animals yowling, and then a yipping that sounded closer to a domestic dog. I began to fear we might witness that sad fate lost dogs in Chugach State Park often suffer.


From a deep ravine in the side of the basin, a dark coyote dashed across tundra. Seconds later, the massive, dark, golden eagle came swooping from the same ravine, and to our disbelief, turned into a dive bomb of the coyote!


The eagle aborted at the last second, but what ensued was a surreal came of predator vs predator, as the two changed roles over and over. The eagle would land on the far side of the basin, and the coyote would charge across, getting with only feet before the eagle would swoop off and the coyote would leap in the air snapping at it. A second coyote guarded the base of the deep ravine, and the eagle seemed intent on getting back into, sometimes dive bombing the coyotes.


We think the coyote den was in the ravine, and the eagle had snuck in and hit a pup, and was trying to get back in.


Eventually, they settled into a stalemate, and we headed up the last little pitch to the top of Overlook. 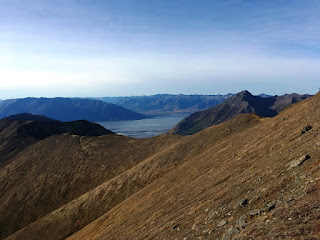 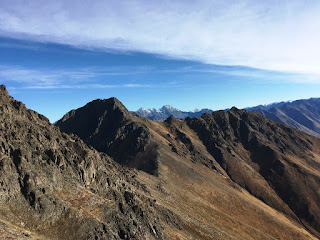 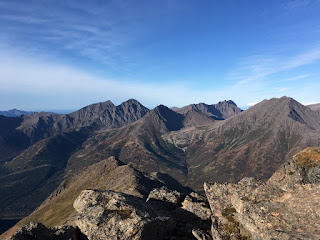 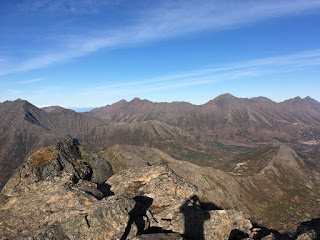 We were working our way down the ridgeline to the saddle by 11:30, and just before we tipped over into South Fork Ship Creek, the basin behind us again erupted.


We scared up droves of ptarmigan in the nameless basin northwest of Overlook, but I was shocked when we came across two hikers standing on a peninsula jutting into the tarns.


I figured that after the two hikers we’d seen on our way up Bird, we’d probably not seen another person until somewhere in the Ship Lake Pass Valley. 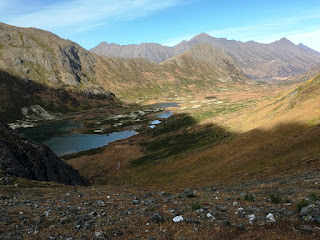 I’m not sure how our route across the Indian Pass compared to a couple years ago. I remember Phil working quite hard to keep us from having to do any really bushwhacking.


It was probably moot for us, the vegetation was largely collapsed, and the marshy bogs were mostly frozen over.


We were on the muddy the Arctic-Indian trail, complete with now frozen postholes made from some idiot horsepackers (nice work tool bags) around 1. Ironic that the sketchiest footing we’d encountered in hours was on a trail.


We pretty easily found the much thinner trail to Ship Lake, and enjoyed some of the nicest jogging stretches of the day was we gradually climbed back into the alpine valley. 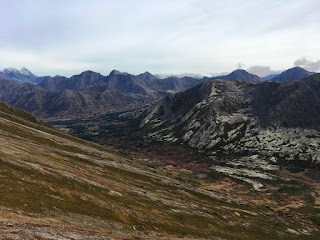 I had a pretty solid memory of the climb up Ship Lake Pass being a bit of a doozey. From below, it doesn’t look very steep or long, and it’s crimson red fall coat of low bush blueberries makes it seem almost soft, warm, and somehow benign.


The positive, was that both Nathan and I would later agree, that the 30 minute vertical grind may be hard, but it’s hard in way that, if it doesn’t stop you, feels really good.


We agreed on this later, only because as we climbed, we bagan to separate. Nathan was heading a little more toward the Ramp, while I slipped into a gully and then hooked on a cross-cut sheep trail that took me pretty well right into the bottom of the saddle.


Nathan was expecting me to pop out of the gully, while I tipped over the saddle instead, simultaneously expecting to see Nathan pop out somewhere higher on the ridge. Getting a bit chilly, I figured I’d just walk along in the big open expanse, and Nathan could jog down and catch up. After walking for a bit and still not seeing Nathan crest, I began to scratch my head. There were some people scrambling up the Ramp, and as I started shivering, I began to fear Nathan had thought I had somehow ended up on his right, and that he was chasing phantom Dante up the Ramp!


In reality, he was just behind the ridge, wondering why the hell it was taking me so long to get out of the gully he’d last seem me drop into. I was starting to hike back up when I saw him pop up over the saddle, much to my relief.


We synced back up and enjoyed the downhill cruise back to Powerline Pass.