The last few seasons have not been good to Hatcher. Other than a few recon trips, I haven’t had a real descent in the Talkeetna Mountains since December of 2015, and even then, it wasn’t all that great.


This winter, the season is playing hard to get: cold and dry.


If it weren’t for a few copious snowfalls above 3,000 FSL in the Talkeetnas in late October, there’d be no skiing at all.


As it is, the snowpack is weak, and ready for a disaster if the pattern shifts and dumps heaps of snow up there. On the plus side, a crust formed over Halloween has given the normally dry and airy snow of that range some armored base to protect bases from ever-lurking granite.


Meredith and I had planned only to go Nordic skiing at Independence mine two weekends ago, but a few pictures from Jack made me think we might go for a tour first and look for softer snow in sheltered locations where the winds hadn’t totally decimated the surface conditions. A lack of avalanche activity following the Halloween cycle indicated we could safely venture out on moderate slopes.


We tossed in skins and wide planks along with our Nordic gear, and I envisioned a little schussing about in some mellow rock gardens where the snow pack would be anchored and hopefully playful.


An hour of touring and a pit later, and we realized conditions were a lot better than we hoped, and another hour later we were cautiously but hopefully navigating our way up the ridge to Gold Cord Peak.


The wind had done a number to the snow, but had been consistent and predictable in its work: if it looked wind-effected, it was.


Everything else though, was really pleasant.


Despite a temperature of 10 in the parking lot, we enjoyed two sunny laps from the top of Gold Cord Peak.


A week later, we returned. A light snowfall and some occasional gusty breezes had complicated surface conditions a tad, but done little to the avalanche quotient.


Not seeing our tracks from the previous week on the front face of GCP, we were lured back to the top. The winds’s effect had been less predictable and bit more swirly, and the firm base created by the Halloween event showed signs of weakening in places, providing an occasionally punchy consistency beneath, but was still worth yet another two sunny runs.


The next day, a Saturday, Cody and I returned. Expecting the crowds to be on the thick side, we move toward Friendship Pass area. Along the way we looked longingly into hidden couloir (no idea if this is really its name) on the side of Granite. A week prior, the line had been ridden by a snowboarder who appeared to have booted all the way from the parking lot up to Gold Cord Mine and up the line. Those tracks had been completely erased by the snowfall and wind, so we decided to give it a go.


We agreed to commit to backing out if we entered the chasm and found conditions to be firm or variable/punchy, and not suckered into the old: “maybe it’ll get better,” because after all, it almost never does.


Well, almost reared its head, because it did get better.


Just above the apron, conditions were briefly firm enough that we were only toeing-in to the stiff windboard. I think the only reason we didn’t stop right then and there is that neither of us wanted to step into gear on such firm conditions.


A bit higher up and conditions softened some, but still weren’t great. One side of the line was actually quite nice, right down the middle there appeared to be a buried slough path that provided great booting, while the other half of the line was deeper with a punchy crust buried too deep to impact skiing, though not ideal for climbing as our boots easily busted through.


Each step seemed to reveal improved snow quality though, and lured us upward toward the gleaming beams of sun poking over the top.


Near the top, the line widened with a pile of protruding boulders in the middle; to either side, we found some of the nicest snow of the whole line.


The top out was the only place we finally found evidence of the boarder who had skied it a week or more prior. His or her cautious side-slip entry was still evident, and had been solidified, to make the final 25 feet very firm.


Up in the sun, we had a magnificent view into the Willow Creek drainage.


We agreed to take our time and ski very conservatively to adapt for the changing – and what would be generally deteriorating – snow quality, as we descended.


The entry was firm and steep, requiring a side slip to get back down to the soft snow below.


Re-grouped, I took the first crack, and skied half the line to get behind a nice alcove.


The snow rode much better than expected, but the top 3-4 inches easily popped loose and ran in 20’ x 20’ sheets, creating significant but slow slough runs down the center.


Part two of the line skied a little rougher, but we knew what was coming, and the slough we knocked loose above provided a consistent bed to ride on top of until we hit the creamy apron.


Having fulfilled our quota of booting, we mooched a fresh skinner from a departing group into an adjacent pillow playground, and had a great evening run riding through a series of shoots and pillows to end the day. 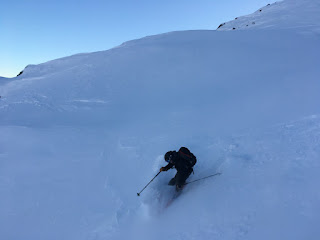 Here’s to hoping for more adventures in the Talkeetnas this winter, and being grateful for finally getting back into them after such a long hiatus.
Posted by Dante at 9:20 PM