I’ve wanted to do a ski tour that made a full circuit The Pinnacle for a few years now. I’ve managed to ski all four corners of this iconic Hatcher Pass summit one at a time or in pairs, but stringing them together has remained an elusive goal since 2013 (West Face and Webfoot Couloir) (Fairangel Couloir) (Northwest Pinnacle Couloir).

After enjoying a couple days of good skiing around Independence Mine over the long Christmas Holiday, I suggested to Nathan that we give this loop a go on the 26th.


I have oft envisioned the loop being skied counter-clockwise from Independence Mine.


That would be a bad idea right now. While skiing Gold Cord Peak on the 23rd, we noticed Pinnacle’s Northwest Couloir was incredibly boney at its mouth. Nathan correctly identified from afar that winds tumbling down the western-side of The Pinnacle had created a vacuum effect in the narrow chasm at the base of the line, and the only snow that remained was a bullet proof wind-pack encasing a jumble of exposed boulders.


This effectively meant the PNwC was going to be a climbing route only, and steered the decision to instead ski the loop clockwise.


We took off at sun-up and cruised through the first orange rays of the cold morning light on the Nordic trails and a broken skinner that went right to the base of the west face. We broke a short ways north over to the base of the PNwC, and threw the boards on the packs. The line was unrecognizable from December 2015 when we last skied it: a total rock garden of exposed granite littered the first couple hundred feet. It was unfathomable how it was ever skiable at all.


The Verts stayed stowed; crampons weren’t necessary, but they wouldn’t have hurt either. We toed in, rarely much past the welt of our boots. I couldn’t help but think about how we could not have climbed in soft boots without the aid of crampons.
The intermixed rocks and hard pack gave way to a punchy snow and we accelerated to a small rock outcrop mid-way to regroup.


The upper section opens up wide and broad-faced, above us loomed a 4-foot-high wind drift we needed to sneak over. It was scary as fuck.


From there we moved at sprint pace over hollow snow between sections of limited protection.
Finally, I closed the last segment and stepped onto hard-packed snow, just 5 feet from the edge, but unable to see whether our line to Fairangel would go.


I wanted desperately to look over and find out our fate, but I resisted the urge and spotted Nathan as he bolted up the last segment.


Rejoined up top, I held my breath and carefully nosed toward the edge, watching as the Buick-sized overhung cornice to my left grew as I inched outward.


When we tried an up an over in December 2015, the Fairangel Couloir had not backfilled, and would have required a brain dead mandatory drop, or a rappel. There was much more snow this year, and a group had skied the Fairangel Couloir in mid-November, so I had reason to believe it went, but still, over a month and several wind events had occurred since that group skied.


If the Fairangel didn’t go, we’d have to retreat and ski the sketchy wind slab-laden PNwC back down and into the garbage disposal rock garden below.


The sense of relief that washed over me as I peaked over into the beautiful chasm below, lacking a drop or any signs of danger, was immense.
Nathan, who couldn’t see, was clearly wondering why I was just staring, but for the moment, I was just so relieved that I was speechless.


I drew back so he could see as well, and we went to work cutting away a block of cornice.


The chunk, about the size of a very large microwave or small mini fridge, thudded softly into the line below and rolled away, not even moving slough.


Nathan buckled in first and used the ledge we’d cut away like a bench, a bench with a hell of a view. He dropped, cut, cut again, and then ran out the line to the bottom of the apron.
I buckled in, made a few cuts, and let it go, sliding lower and lower off the tall sidewalls until I moved in and surfed out the soft 4-inch slough train that was running down the gut.


The snow improved, from a bit punchy at the top, to deeper and lighter as we descended.


At the base, we noticed a few tracks descending from the Webfoot/Fairangel dividing ridge. The speedy Rando crew that we’d watched climb the west side of The Pinnacle and tip over into the Webfoot Couloir had passed through here on the 23rd. We’d be reversing their route for the remainder of the day.


While several hundred feet of glorious cold smoke beckoned us to keep skiing to the Fairangel’s valley floor, I knew skinning in the cold and faceted snow would be a task, and we wisely sidled over to the base of the dividing ridge and transitioned instead.


With the Archangel Valley still closed to machines, and the poor Nordic groomer unable to make its way up the valley through the deep snow, it was a perfectly still and quiet skin up to the ridge, save for the hiss of the veneer-thin facet sloughs slipping away below our boards.


We dropped down the cross-over couloir to the base of the Webfoot Couloir. The Rando crew had used the cross-over couloir for a skinner to get to Fairangel from Webfoot, and I was worried we’d feel it on, but in the days that had passed, the snow had dried out and it was unnoticeable. Unfortunately, I did feel the hidden gremlin that knicked my board’s tail with a resounding thwack, reminding me that as deep and glorious as the snow was, the granite boulders were still lying just out of sight in places.


We faced up to Pinnacle’s Webfoot Couloir. The wind had exposed a few of the line’s big boulders, but overall, it looked good. I checked the watch, 1:40PM. We skinned the tall apron to the mouth of the line, and switched over to Verts.


I’m so glad we’d carried them. Our poles easily plunged waist deep, but the Verts held us afloat and we rarely sunk past our knees. We rotated out in 50-foot intervals, and while it was by no means easy, we marveled at how much easier climbing this line felt with the right tools compared to November 2013.


We topped out in an hour and change after starting. I’d posited at the beginning of the day, that we might consider dropping this line and recycling our booter if we made descent time. I also pointed out that it would likely be the case that we’d have to weigh that against just making a sunlit descent of the west face after not having seen the sun for the bulk of the day. In fact, the last weak rays we’d enjoyed were right before booting through the rock garden at the base of the PNwC, almost 3 hours ago.


We were buckled in at 2:50PM. If we turned around and skied the Webfoot, we’d be back on top of the ridge around 4, almost 20 minutes past sunset. Obviously, there would still be ample blue light to ski out, but, as expected, the choice was clear: ski in the sun. 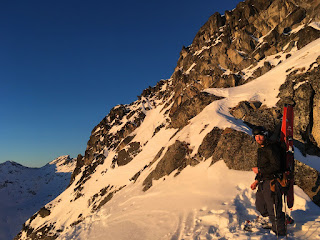 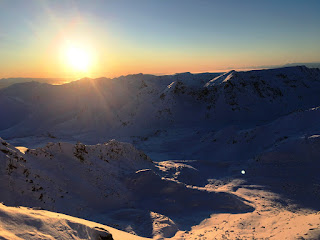 I was a little worried about the west face from recent wind loading, but damn, it was solid and skied wonderfully. Off the steeps, we rallied our way through the playful mushroom features in the playground terrain back to the mine.
While the Pinnacle circuit was certainly a fitting cap to the long holiday weekend, it was hardly the only photo-worthy skiing. 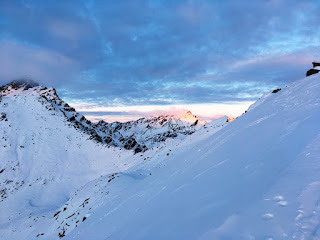