Clothesline Couloir and other Adventures in a Bi-Polar Winter

With another tropical fire hose pointing at Alaska this past weekend, Joe, Nathan, and I went to eke out the last of the good lighting and stable conditions on offer in Hatcher on Saturday. We knew the weather was moving in fast, and despite blue bird skies, cold temps, and relative, calm, we resisted the urge to chase after something more committing or deeper. Instead we focued our efforts on two short, steep, narrow lines that rewarded us with deep, cold, stable snow, shelter from increasing winds, good viz as the skies went opaque, and a some little-league technical skiing to dull our edges but sharpen our senses. 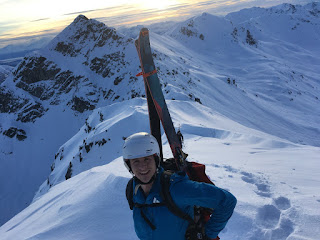 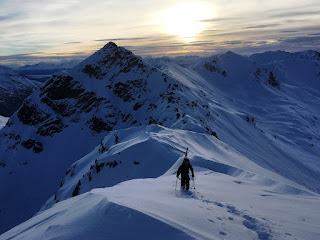 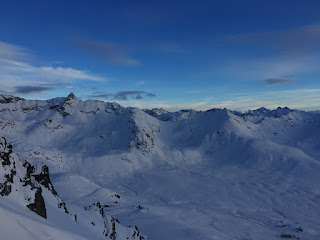 Our first line was super straightforward. Despite deep dry snow, the Verts helped us make a reasonable climb. Up on the ridge, we climbed a bit higher to investigate skiing into a hanging bowl that fed into two couloirs, each featuring a clothesline tram cable across it. Despite the obvious apparent decapitation hazard (the cables aren't really a threat without another 3 feet of snow or if you're also an NBA point guard), the bigger concern was dropping into the hanging snow field that had been exposed to more wind and loading without assessing it from a less committing position (e.g., from below). Also, there's this really good rule to follow in Hatcher: If you haven't seen it, you probably shouldn't ski it. More on that later.


With storm clouds rapidly moving in, we opted to stay in the neighborhood and try the clothesline couloir next.
The line had a minor twist in it, and was a tad wider. Up we went.
Well, wouldn't you know it, just around the twist was a "stone wall."
OK, not really, but the line features a barricade of large boulders. We climbed up to the rocks, and, although they presented an obvious necessary down climb, we decided to press on.
I'm glad we did, but that's a real reminder on Hatcher skiing protocol. From above, the rock wall looked like a crux, at worst. I'd just hammered the last couloir at high speed, and had we dropped this one, I likely would have felt confident going into this one hot. The stone wall was too big to even consider trying to leap over, and, even if you did, it had a few gremlins lurking below. This line required a cautious and slow approach with an emphasis on slough management, tipetoeing down the rocks, and then exiting as you pleased.
It was a little league kind of challenge, but fun practice. 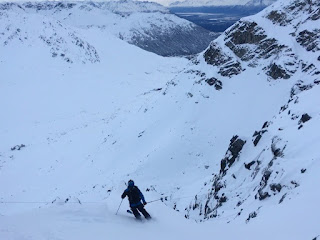 As predicted, the fire hose slammed into the Kenai, but despite warnings from the National weather Service of "Impossible travel conditions" we somehow managed to make it to Tin Can, and found great skiing Sunday and Monday. I guess anything is possible...