Sidney Creek Circuit and “The Juicer”

A couple years ago, in a season of lower snowfall, Cody and I went for a tour into Sidney Creek, a tributary to Archangel, and saw a striking line off the Sidney-side of Microdot.
A crooked line that falls between two “cat ear” flakes of granite; narrow, and peppered in it’s upper half, it slips through a 55-degree 6-foot-wide choke midway, and then opens up wide to the bottom.
In January 2015, Cody and I booted through variable snow to the choke. Above us, we had supportable bullet proof snow in the choke, and higher yet, two notable ledges.
The line went into a mental notebook, and disappeared for a couple years.


Last week, our winter’s latest bout of bi-polar disorder crescendoed with temperatures that hit 50 degrees in parts of the Anchorage Bowl, and winds that roared into the 70MPH range in Hatchers. As bad as that sounds, the winds did a thorough job wiping out and compacting the long-dried out and faceted snow that had hung out through the holidays. A “make up, we’re sorry” snowfall ensued midweek to put a happy face on an angry season, and Hatcher was back in a 24-hour turnaround.
WTF.

Nathan, Meredith, and I headed out Friday afternoon under cold, clear skies. The winds had slam-packed the snow, stability was good, surface conditions were drier and sloughy.
The Juicer tour was on.
We slipped up the sunny front side of Microdot, and skied into the settled backside powder down to the lake. A fun, feature-routed skinner brought us below the back side of the cat ear entrance.
I had some concern the benign looking flakes we were aiming for would be the wrong entry. The short boot wasn't much fun, despite the wind's work, bare boots plunged into the snow.
We climbed into the enclave and onto a cornice, walked out onto the hard snow, and looked down.
There were three separate reactions to what we saw between the three of us.
The upper portion of the line was steep, a little wind blown, and loaded with shark fins. It funneled down to a point where we simply couldn't see any more of the line, just rock buttresses.
I was 95% this was the Juicer from my angle, and when I joined Nathan in the narrow entrance, I could see the choke below, and the wider lower section.
This was it alright.


As expected, the upper portion of this line was going to be a very slow, conservative ski. We were likely to knock down a lot of slough even making jump turns, there was no where to hide, and there was a lot of nasty crap to get grated over or scraped against if you lost your feet.
We discussed that aside from some of the visible rock, there might be at least one, possible two, exposed, or thinly buried ledges.

Meredith wanted to go first. It was a committing ski, I didn't doubt for a second she could handle it, but I was expecting to either tail gun or lead this line, with Meredith in the middle.
It was definitely the right call. We discussed the strategy. She would ski down through the choke as conservatively as she pleased. Once through the choke, I knew there was an enclave for her to hang out and hide under. She would radio back up from there.

Down she went, jump turning between the rocks. We lost sight of her as she approached the choke, but released a significant amount of slough, enough in fact, that her slough was able to step down and pull out a lower layer of densified snow in one place.


She radioed up that she was below the choke, but that in skiing through the choke, her slough had taken out a lot of snow, making it even narrower.
I took my time jump turning down, but felt really good. As I closed in on the choke, I could see that some slough had held over the choke proper. I decided to straight line the feature, and bypass the enclave Meredith was hanging out in as I'd be too hot after shooting the 55-degree slope, and instead steer into the next enclave 50 feet down the line. I feared taking the choke slow would erode more of the snow and I wanted to leave something for Nathan. I was confident with the line below that I could pull this off.
I took a deep breath and pointed the nose into a straight line dive through the narrow slot, blasted out, and bled off speed into the next enclave, thrilled with the rush.

Nathan made the shortest work of the line, and got to ski the whole Juicer top to bottom. Meredith followed from here hide out, and I dropped the lower section last. 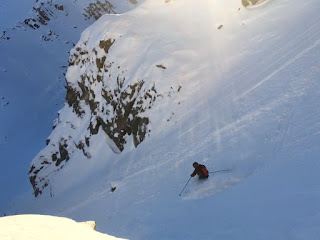 We party skied down through to the valley bottom to turn around and see the line, and all it's neighbors, rising above. 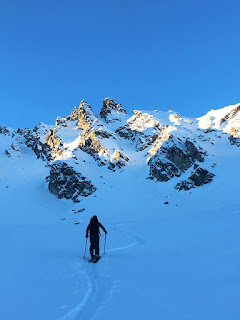 We finished the circuit and the day by heading back up the gentle pass to Microdot's shoulder, and skiing the sunlit slope back down to Independence. 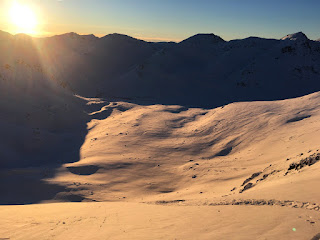 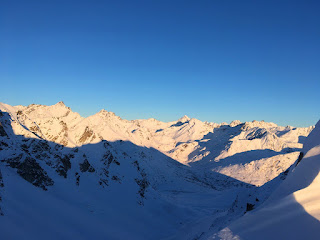 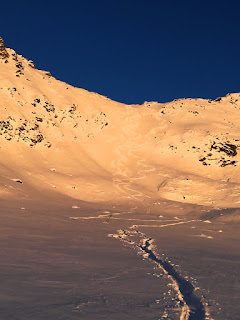 When I see a line like this, and park it away, only to think of it in passing moments of recollection, in the space between sleep and dreams; to eventually go out and ski it, even years later, to feel as good out there as it did in dreams, it's definitely what keeps me hitched to this sport. This was easily one of the most rewarding lines I've skied in Hatcher, and I'd rate it just behind Key Slot in the overall.

With some clouds rolling in, Joe, Nathan and I returned Saturday to ski Hidden Couloir and fish around Babe Ruth. 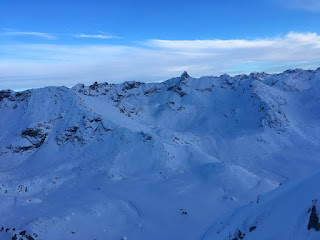