I've watched plenty of bears in camp, even scared them off with my car, but all my encounters here have felt pretty safe and I've felt in control. This morning however, it looked like all that was about to get turned on its head.

Like falling off a bike or tripping down the stairs, that little primordial part of my brain shifted into gear and the world slowed its rotation around the sun to about half speed. My head was swiveling towards the woods behind me, my mind already racing ahead trying to plan my next move. My ears could see what my eyes still hadn't. I'd never seen a bear in the open at this time of day, but that ambling pace was too distinct not to recognize.

I wanted to see an obnoxious red squirrel or maybe even the neighbor's dog, but as my eyes finally reached the edge of the yard 35 feet away, I saw the light colored fur atop the back of a griz.

Frozen I, watched. He was moving east, I couldn't see him entirely. The spawned out pinks rotting on the shoreline surely brought him here. He was too close to the edge of the deck, but if he kept moving he'd have made it by the stairs and I wouldn't care anymore. I questioned if I should let him know I was here, or just watch him roll through.

He slowed, fuck! I watched his nose come up and start sniffing, double fuck. I tried to anticipate his next move; I knew he was going into hyper mode, he needed to stuff in as many calories as possible right now, otherwise he wouldn't be out foraging at this hour, but there were dead fish all over the shore, I should be fine. To my disbelief, he stopped, changed course, and followed his nose right towards the staircase that lead directly to where I stood.

Still searching the air for clues to the origin of the curious scent, he was now within 20 feet. I was 3 feet from the door, I could slip inside I thought...where was the bear spray, the killing machine, was this about to happen? Should I go hide and let this bear have himself an unsolved mystery, or even let him investigate the deck for himself?

Hell no I thought, breaking my freeze, I moved forward. This is my deck, my yard; I don't care if this guy wants to clean up the shore at night, but not while I'm right here. Past the stairs leading to the deck with a railing between them and myself, I had a clean break for the sliding door now.

Stopped, his ears perked to the sound, though still he continued to search at ground level, sniffing at the air, the thought to look up had yet to occur. He was within 15 feet of the deck as I looked down on him. Smaller compared to the other bruins I'd seen in camp, my eyes shot to the woods to see if maybe mom was in tow. No, this was a young male; he looked relatively well fed, not overly rotund, but certainly not ribby.

His eyes widened and suddenly he was on his haunches wheeling back east away from the deck. He'd connected the dots; put the smell to the sound to the sight of my ugly bi-ped figure. As he spun our eyes locked. I could see the terror in them, he reminded me of a dog, guilty of raiding the trash, fearful of what might happen next.

But my heart leapt too, something in those eyes shot a bolt through me. I knew I had the upper hand, but in those eyes, behind those jowls, locked in the rolling muscles of his broad shoulders, was a message that called for the upmost respect. That bear was trotting in the direction he'd originally been ambling now, checking back to see if I was in pursuit. What I saw however was a beast that could just as well have me on the run.

I'll be damned was all I could think as I scurried inside to grab my camera. Just yesterday I'd ridden by myself for four hours in a valley with one of the densest concentrations of bears maybe in the world, and never seen a one, but I couldn't go to the grocery store without getting far closer than I would prefer?! That's my new life. 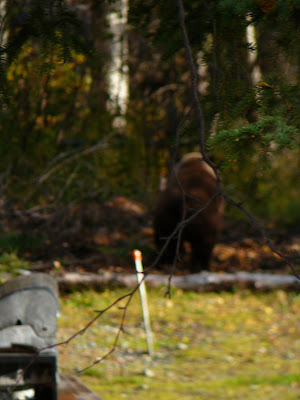 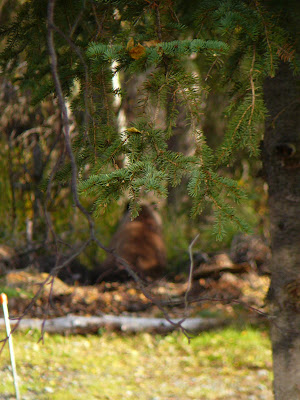 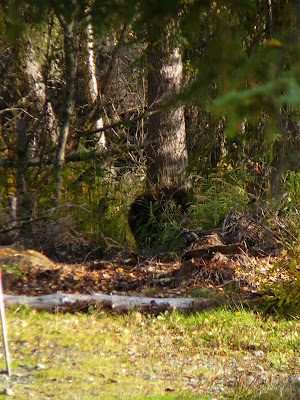 I couldn't quite keep my hands steady or get a good focus, jeez I dunno why!

...please where can I buy a unicorn?