Writing in the Dark: UPDATE 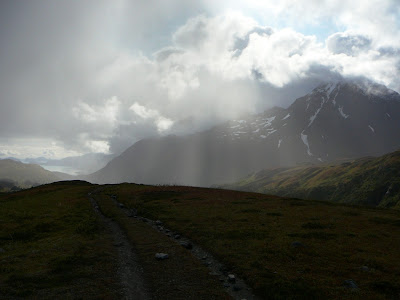 Top of the tundra plateau on the way to Lost Lake outside of Seward last weekend. Resurection Bay and Seward are in the distance. By far my numberone favorite ride in the Kenai


Ok, after my last post almost 2 months ago, I apologize. The early weeks of August were absolutely nuts. Camp continued to stay booked. Despite a near drag in fishing after King Season closed and Silvers continued to feast out at sea, we had pink salmon up to our ears. Ryan decided they made excellent "Salmon patties" and began pushing pink fishing on our guests. It was unbelievable, if you had more than three casts without a fish, you were doing something wrong. It was a bunch of fun to catch them no question, I could only compare it to fishing in a stocked pond of jumbo small mouth bass that'd been starved for weeks. We challenged guests to fish-offs to see who could get a five, or ten fish to the boat first, or held the "Olympinks" at the end of the day to see who'd caught the biggest, smallest, and of course, ugliest fish of the day. While this got a few of our guests excited to go haul the buggers in by the boatload, literally, that meant I was filleting and skinning hundreds a day for essentially pennies, as the little fish can hardly tilt a scale when all is said and done.
Fortunately the Silvers came in thick and strong so the pinkolympics came to an end. My father came up the week of the 20th. At that point camp had cleared out so we more or less had the run of the place. Ryan was able to fit my dad onto his boat in the morning with the charters while I took care of any work that needed to be done. Through the afternoon dad went out and nailed the pinks, which had finally started getting up to camp, good and ugly. 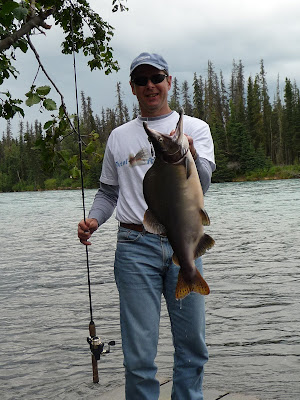 In the evenings we went back out with Ryan to chase after the silvers, doing well each night. 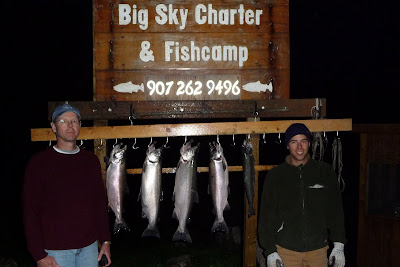 One of the days we went to Seward and fished a combo trip on Resurrection Bay. Though late in the year, we did pretty well considering the rough seas. We also got to watch humpback breaching only a few dozen yards from the boat on the run back in. We did a trip for halibut in the inlet, but some lessons are learned the hard way; unable to get the day I wanted with my preferred captain, I tried a new guy from Texasssss. 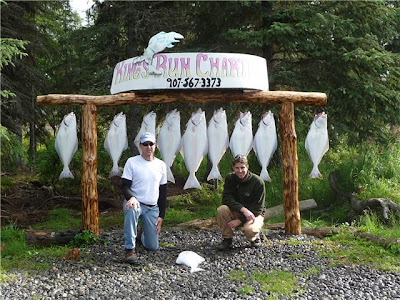 He was a fool, bottom line, but I know enough about what I'm doing out there that we did fine, though we didn't really have a chance to go after any lunkers like I wanted. 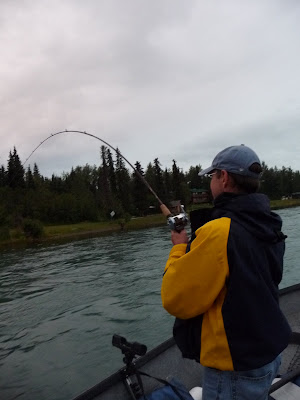 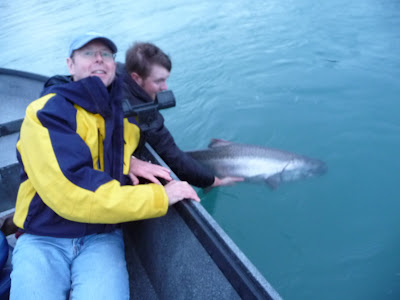 My dad hooked himself into a strange chrome late run king. The 40-45 pound fish gave him a solid 10 minute fight. I was just estatic he got to fight a bright king on the Kenai.


To top off the wildlife experience, three bruins, a mother and her 2-3 year old cubs walked right through camp not 30 feet away as we sat on the deck enjoying cool brews. I had to hang onto the back of Dad's shirt as he tried furiously to run inside and hide (I'm not exaggerating here folks) but those bears were far more interested in rooting through the rotten salmon carcasses piled up in the river. 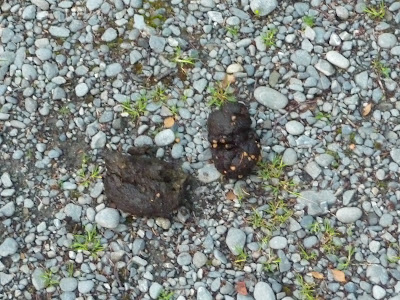 The whole experience was truly awesome. Between the great fishing, wildlife and exceptional weather (probably the best I saw all summer), I really felt like the trip let me get closer to my father. I know he was a bit hesitant to come up here, and apprehensive about my decision, but I think getting to see what a blast it was, how hard I had to work, and how good the people I met/lived and worked with were, let him see what an opportunity it really was. Then again, I could be making all this up, smoking cigars, drinking Alaskan Summer Ale, and whacking pinks off the dock is pretty good too! 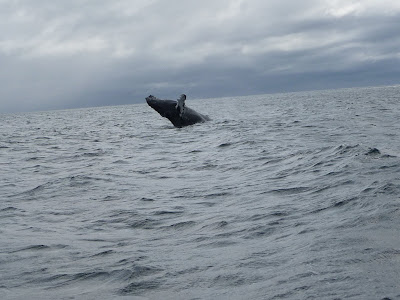 My mom came up the following week. Originally the plan had been to drive back to the lower 48 together, but as of mid-August, after my boss Joe offered to live in camp rent free while he was gone and watch over the place, I decided I would at least hold in Sterling while I searched for a job. We had a great time as well, no fishing, just sightseeing. We spent a day in Anchorage, Homer which I hadn't visited yet, and Seward. She also did a half day horseback ride in Cooper Landing, allowing her to see the mountains I play in on the weekends at her pace instead of mine (always a good thing).

With the parents gone by the beginning of the month, Joe and I closed up camp, and I began searching for jobs. Adam, one of the guides helped me get a place in Anchorage, so all I needed was some work. I started putting in applications with environmental firms in Alaska, Washington, California and Colorado. Life slowed down big time. Joe left with his wife for Arizona in their motor home mid month, and the neighbors had largely cleared out. I had the place to myself and almost nothing to do besides apply for jobs, fish, watch the bears and get back into riding. Life was pretty good, but winter has been coming down across the area quickly. 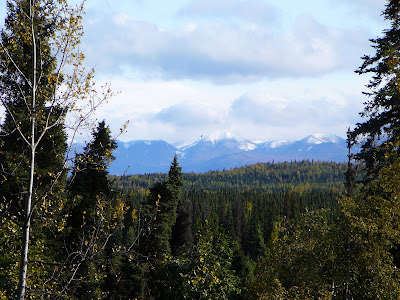 Snow started sticking high up in the mountains and has slowly been working its way lower and lower. Next week we're forecasted to get some down here, though I doubt it will stick. The cool wet weather along with the waning light had me really wondering if I was sure I wanted to stick it out up here or consider making a break for the lower 48. 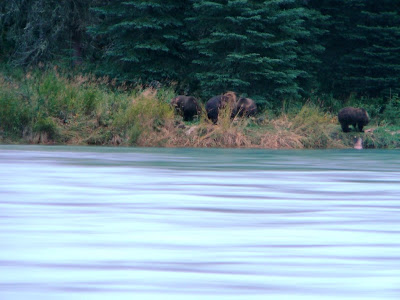 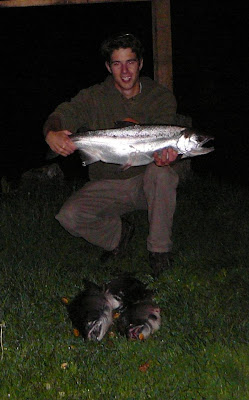 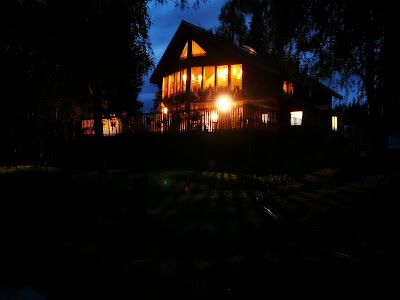 Fishing into the evening, I lit camp up when it got dark while I cleaned my fish given the bear activity

A week and a half ago Bernie shot me an ad from journalismjobs.com for a general new reporter position right here in the peninsula. I'd been avoiding applying for journalism positions because the pay for an entry level position is so low, especially compared to those at say, multi-national oil companies...
Suddenly the option of doing something I know and enjoy, while living rent free was sitting in my lap. I jumped on the ad and hand delivered my resume and clips, something they hardly expected. The following day they asked me to come in for an interview. I had to rush to the local clothing store, as in my haste to leave Vermont, I chose to leave behind my sport jacket, and the nicest pair f pants I brought still had grease stains on the bottom of the right leg from my bike... Anyway, less than three hours after the interview, standing knee deep in the Kenai fishing for the second run silvers, my phone rang, and I was hired. I'm not going to write the name of the paper here to avoid catching screens, not that I'm planning on writing anything deceitful about the paper, but I'd prefer not to attract the attention of corporate eyes, especially having just started. If you're interested in following my work shoot me an email and I'll send you a link.
I'm still concerned from time to time about what it will be like in a month as the cloak of night sweeps in and the temps continue to plunge. More, I long for the closeness of friends I once had in Saratoga and Middlebury. I suppose those will come with time, but when I'm sitting around wishing I could go bag a peak, or grab a drink, time is not my friend. If in a year I'm ready to be done with this place I can always head south. For now, I'm really excited about this opportunity, living rent free, in one of the wildest most beautiful places on earth, doing what I love, and getting paid for it all... what else could a 22/23 year old want!?
Posted by Dante at 9:16 PM

Sounds great! Keep us in the loop!

Loved the pix -- fish are huge!