Did You Eat Your Way-Ohs! This Morning?

Through years of epic adventuring, I’ve learned that the key to the start of a long day on the trail is a solid breakfast. My personal favorite all season fuel up: scrambled eggs with a bit of cheese thrown in, lightly buttered whole wheat toast, a tall glass of orange juice and of course, and a hearty bowl of oatmeal. Up here in the north, however, that breakfast requires an injection of something different.
While I’ve substituted flakes of my smoked coho for cheese in my eggs, and black bread whole wheat toast, I might never come back from a solo ride without a big bowl Way-Ohs! Hey-Ohs! Owwooohs! and YipYips!
So what’s the deal with this, what the heck am I talking about, and why doesn’t my local grocery mart stock up on any of these bottom shelf sounding cereals?
Well here’s the deal, I only eat my Way-Ohs! before I head out on long mountain bike rides by myself, I might have less if I’m going with company, and in a month or so, I won’t need them anymore; at least not until the weather warms in six months.
Ten miles from the trail head, 9 miles from the last person I saw, and 7 days since another person stood on the deck of the cabin I’m munching a Cliff bar on, I have two defenses against a hyperphaisic bruin.
One is a little black can of pressurized irritant with a fire extinguisher styled nozzle. I carry this at the top of the mesh pocket on my pack for a few reasons: It adds weight surly making me a stronger rider, I one day I’m so luck as to see someone else I could use it if I saw them being attacked instead of relying on a hopefully available really big stick, it offers peace of mind… whatever. Two, it’s located high on my pack so in the event that I was attacked and thrown to the ground, I could curl into a fetal position and perhaps the bear would pierce it and then he wouldn’t need to season me.
So I don’t have a lot of faith in pepper spray, and I don’t own nor would I bother to bring a gun for protection. This leaves one last defense, my big mouth, or Way-Ohs!
I’ve spent some solid time keying in on my Way-Ohs! and I have to say I’ve really got a talent for belting out non-sensical calls into the wilderness. Don’t think either, as a pseudo science major, that I haven’t spent some time conducting advanced studies on different pitches and variations to the Way-Oh! I’ve been on rides with others and seen, or perhaps heard of the “yips,” the howls, and the time honored “youts.”
Yips yowls howls and youts however, are more commonly associated with a sudden change in altitude or directional travel. They usually indicate an event that is either really good, or about to lead to something very very bad.
If I went yip-yowl-howl-youting every 15-30 seconds on a trail I’d probably be indicating to my fellow trail users that I was suffering a prolonged vertical or perhaps emotional instability. I might also be indicating to hungry bears that I was actually a pocket dog that ought to be consumed as soon as possible.
More importantly, I really do need a call that will last the duration of my ride. There really could be a bear around the next bend, beyond the tree line or hunkered 20 feet away in the head high grass, probably wanting as little to do with me as I it.
Last Sunday as I rode farther up the Russian river I saw more and more bear sign. The steaming piles of excretion hardly raised the hair on my back as the sight of tracks freshly gouged in the soft earth where a bruin had bolted into the brush likely no longer ago than my last call. But they, along with the fact that I had yet to actually see a bear, confirmed that my incessant calling was working.
So what makes a good Way-Oh! Frequency and volume based on environment. I’ve got to call as fast, or slow as I travel to match my surroundings. It’s common sense here. Bombing down a hill in a spruce forest, I’m not going to give anything much time to react, so I’ve got to call frequently, maybe every 10 seconds. Climbing slowly in an open meadow, one or two calls in the course of a minute would be fine. I can’t go half-way on volume either. Saying way-oh to the rock in front of me isn’t going to do squat, so I’ve got to be comfortable hollering, constantly.
It’s a strange new concept for sure, and one that I’ve adapted only out of necessity. I still remember when I first rode in Alaska four years ago, and our guides told us we need to make noise if we were at the front of the pack. I couldn’t do it. Every shout I released was a reminder to my petrified little self that big bears walked the trails too, and I just had no interest in meeting any of them.
Now I shout so frequently, I sometimes laugh at the thought of getting back in my car and shouting as I drive back down the Sterling highway to camp. More, I wonder about the day, where I may be on a trail in a place not inhabited by such terrifying beasts, and wonder if Way-Ohs! will have become such an integral part of a ride, that I find my own silence as peculiar as I now find my shouting. 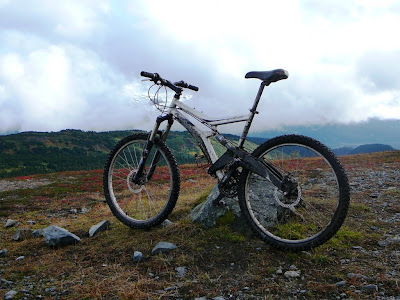 Mari poses at the tundra plateau 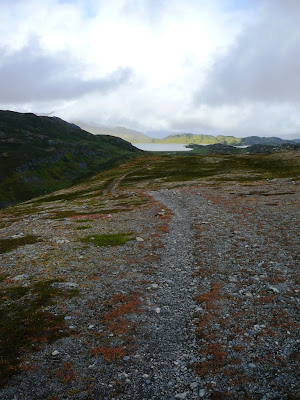 trail on the plateau 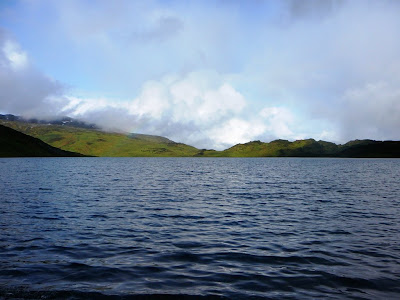 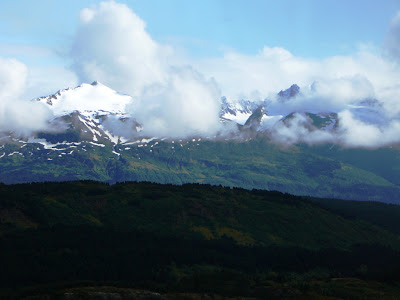 It has a name, I'm too lazy to figure it out right now 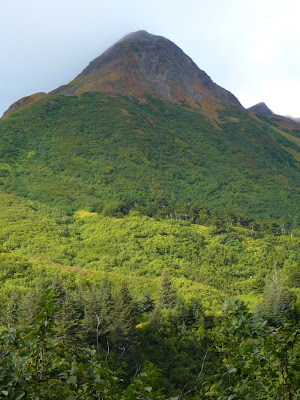 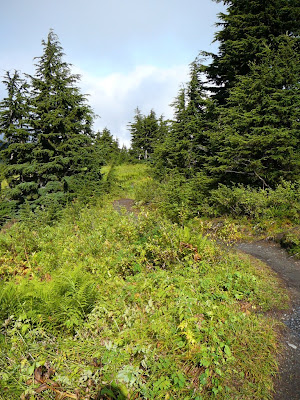 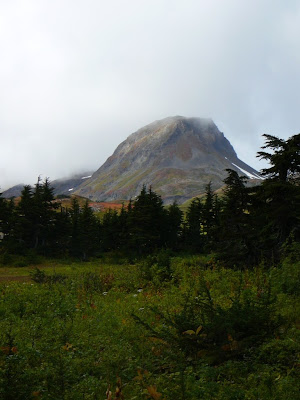 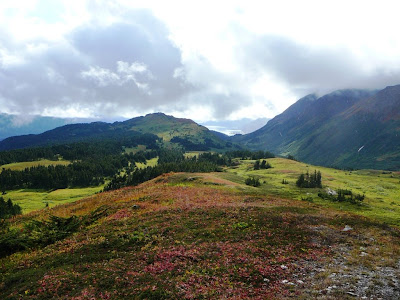 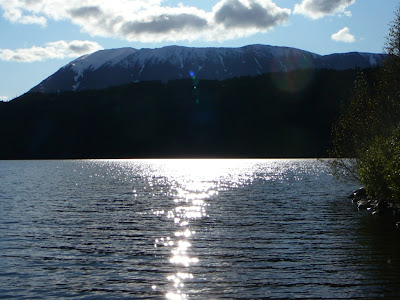 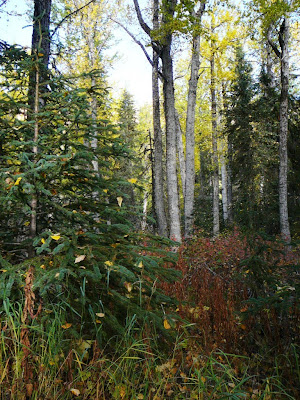 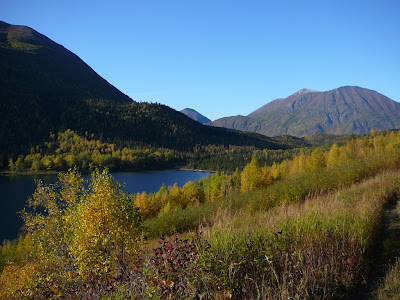 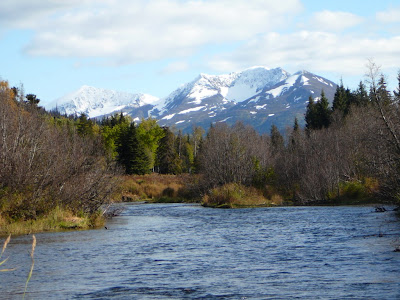 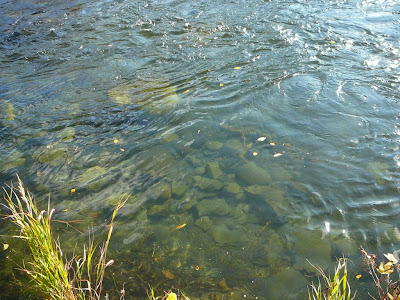 Hole where I saw my first Alaskan Salmon four years ago 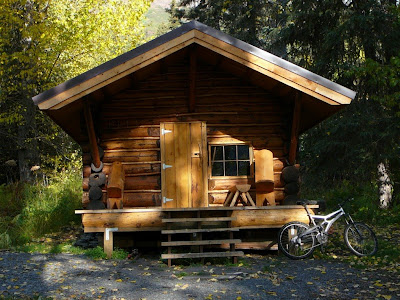 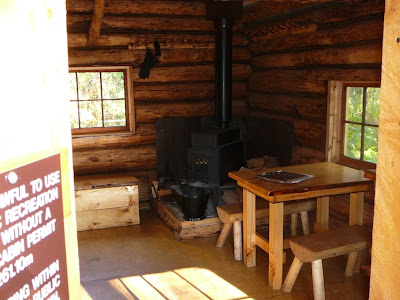 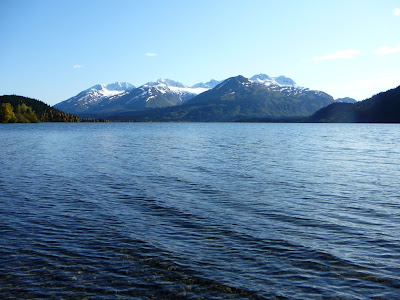 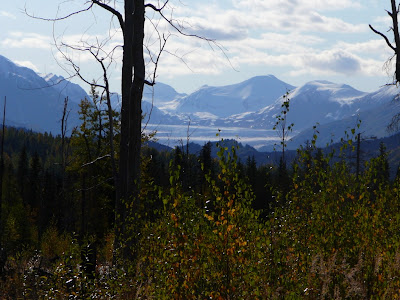 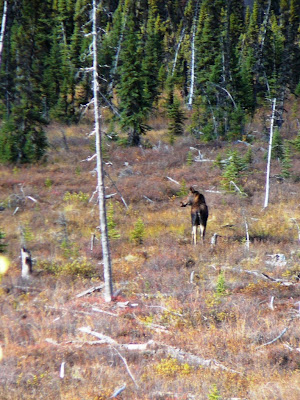 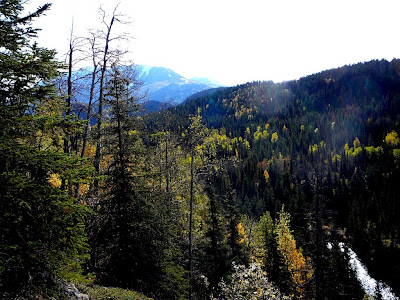 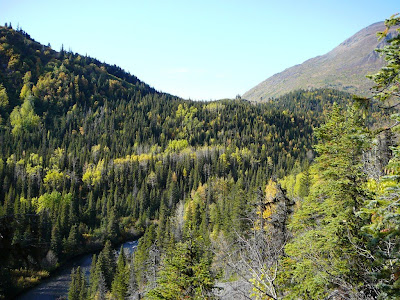 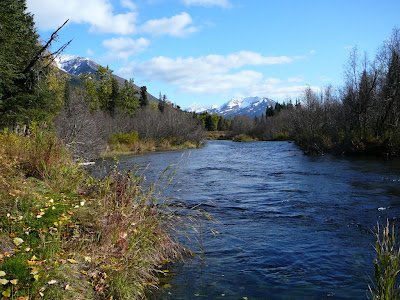 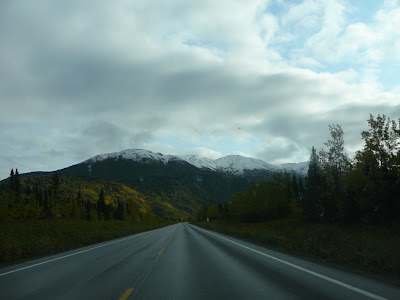 INSANE photos... how is it that every time i see your photos, they are from the most beautiful places in the world? Man, i enjoyed these... thanks bud all the best.
trav