Keith very eloquently sums up this weekend in words that I cannot, at least not on this blog. This was certainly a weekend of saying words perhaps we normally should not. The f-word, certainly, but another word comes to mind as well, the b-word.
No, no, not a b-word that refers to a female dog, I was thinking of the word "best."
Best is a word I hate to use.
By definition, if I experience, and admit that something is the best, I would have to acknowledge that I may never have an experience that's better. I'm far too young to be hitting any peaks yet.
So it is with much hesitation and consternation that I say that these past two weekends have probably been the best snowboarding conditions I've had in my life.
Read that statement like I just wrote the f-word umpteen times in a row instead, because that's what it feels like in my gut to publicly to admit that.
That being said, I really haven't been here all that long in the scheme of things nor have I seen all the terrain this land has to offer. In other words, the ceiling is still a very long ways overhead, even if I'm now looking down at whatever the previous best was.

I'll shut up now and let the photos do the talking.

Friday Keith and I got a leisurely start at Ravens Ridge in Summit Pass. 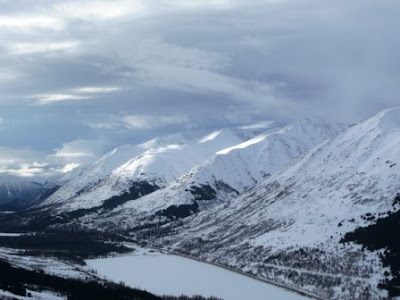 The day started with some typical Kenai God wrath that made for some epic lighting and heavy wet snow down low. Very early on the gods tinkled on us a little, but then moved on and took the clouds with them. As we gained elevation we hit the freeze line and the snow, still cold from the previous week, lightened up underneath. 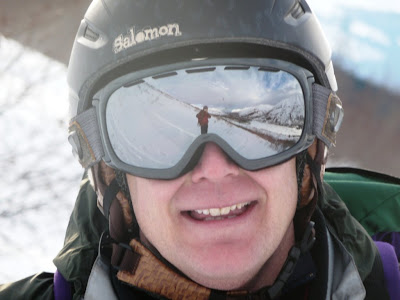 Keith's mirrored goggles offer a different angle of the mountains. (Click to enlarge.) 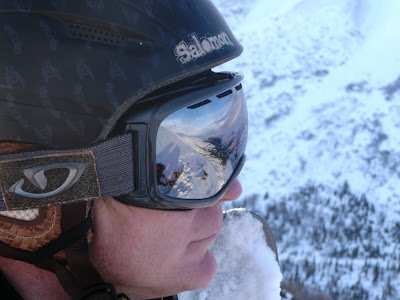 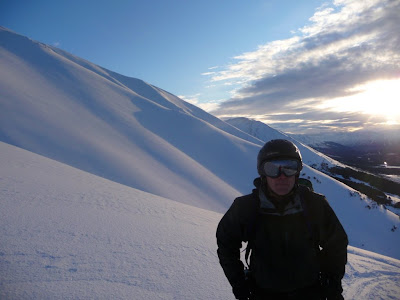 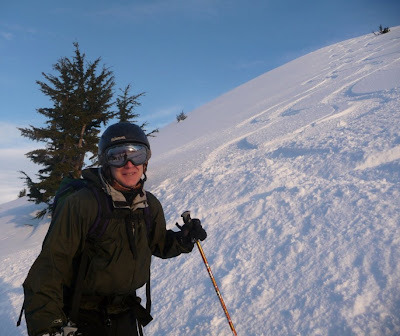 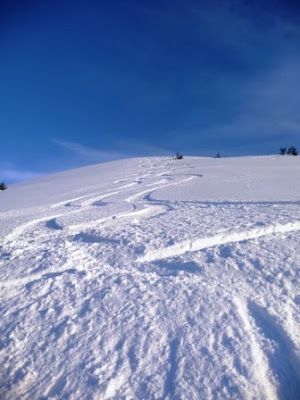 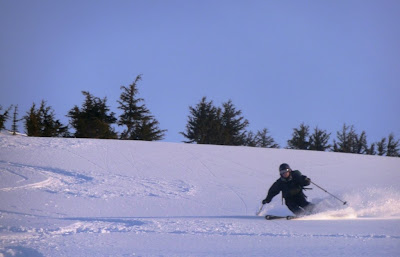 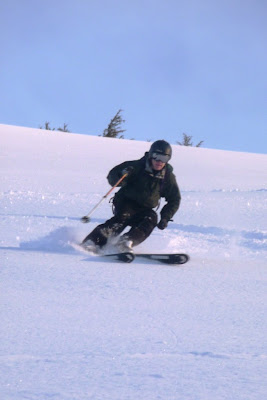 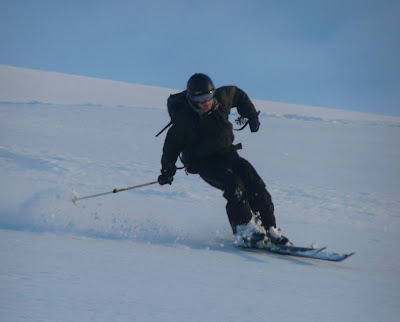 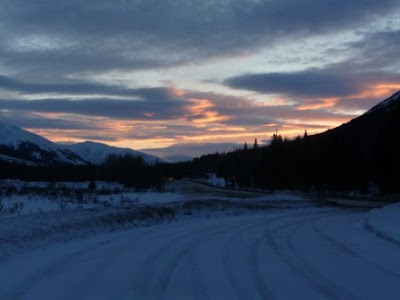 Saturday the "Peninsula Posse," Pete, myself and two others, rendezvoused back at the base of Raven's under some brilliant bluebird. Cold temps overnight sucked the moisture from snow below the freeze line lightening things back up. 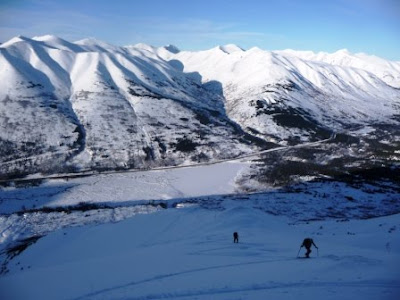 Jack had already blazed an uptrack another 500+ vertical feet up the rib above where Keith and I had been stopping the day before. Clear views all the way to Tern Lake. 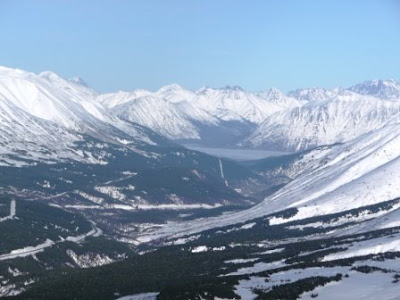 And to a fog bound Turnagain Arm. 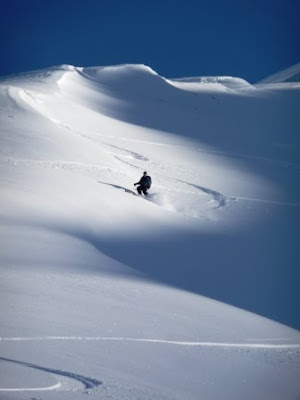 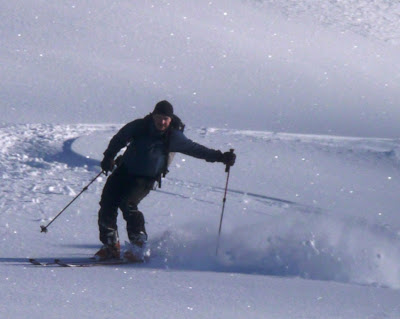 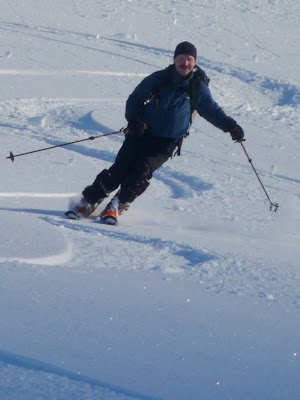 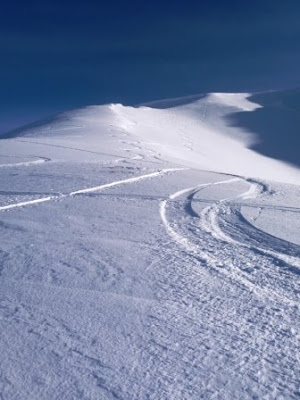 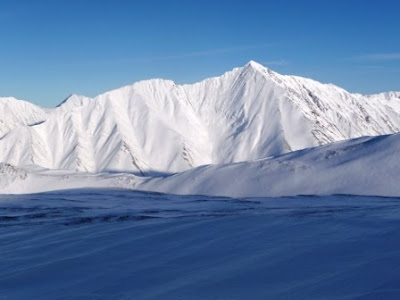 The next round Jack and I pushed all the way up the rib and scrambled over a low spot in the cornice to reach the wind whipped summit ridge. 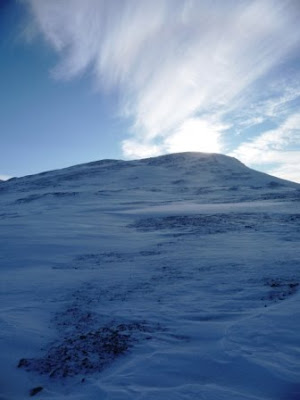 No snow to be found up here. 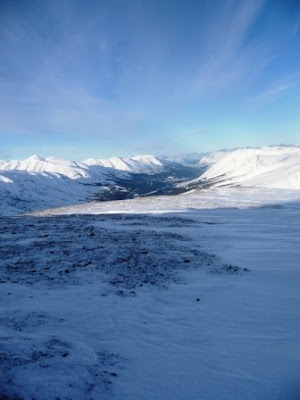 But some pretty good views. 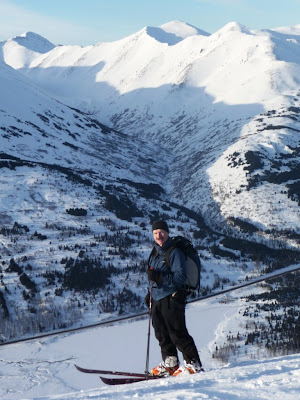 Oh, and a pretty awesome run with an adrenaline pumping launch point. (CTE) 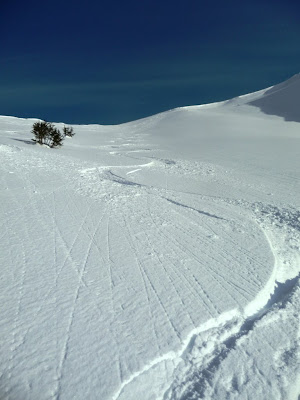 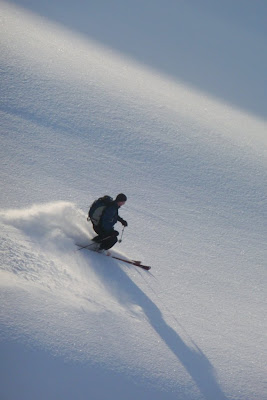 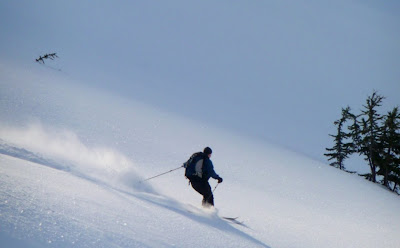 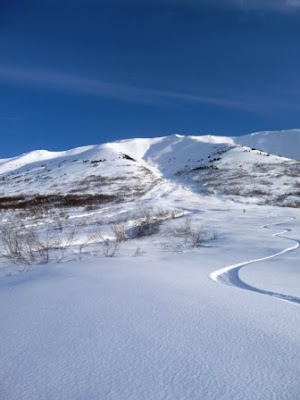 I know I've posted this view before, but it's still unbelievable to throw your head over your shoulder and see this. 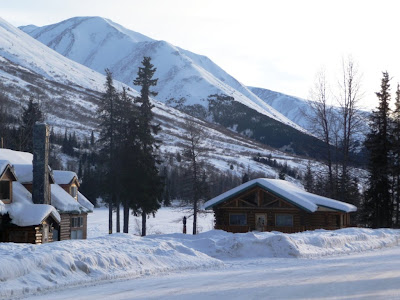 Rach this is for you, per request. (CTE)


While we were skiing a little red plane touched down and took off twice on the lake below us. I found the plane on Tern Lake on the way home. Not sure what happened. 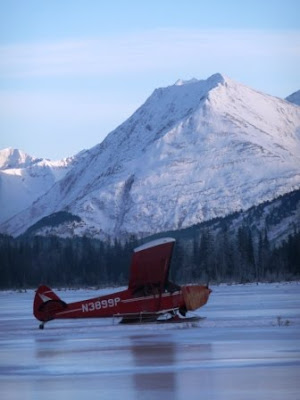 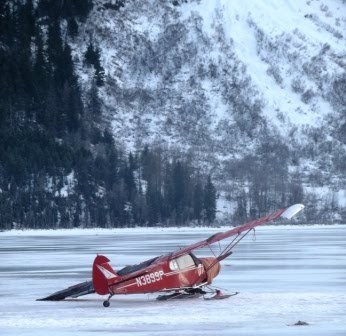 Dude, those are some awesome lines, how long does it take to ascend one of those peaks on a split board set up?

Also, can you send some of that fresh powder to Colorado for me?

Amazing photos as always! Seeing these kind of makes me wonder if I've made the right decisions in my outdoor recreation life -- especially during these trainer-bound months.

Anyway, just because the past couple weeks have been the best conditions you've seen doesn't mean you won't find better conditions in the future. Think of it this way: Best, so far...

Thanks all.
Steve, that's a good question, and actually Jack has our climbing rate down to feet per minute I think. On average I'd say we climb about 1,000 feet an hour. Obviously that could be slower or faster depending on the condition of the skin track and the snow. Friday I had to set my own and my boards got pasted with wet sticky snow so they were collecting weight all day. The splitty is a great climber and keeps up with AT and tele's on the way up, but the conversion from skis to board and back sucks up 5 minutes at either end. It means I never really get a break with skiers. I kninda like that though.
As for snow, you'll have to pay hommage to your own gods.

Bernie, true words on the b-word.
Also, there's still time to see the light and head north. I'm telling you, skate skiing rocks the socks off of road biking.
On that note, I hopped on the trainer on Sunday, and put in an hour long ride to give my legs something different to do. That's the first time I've been in the saddle since the first weekend of November!
I mostly just paced along and watched a movie (Jurassic Park III, finally saw it 9 years after released...)But dang dude, that trainer is a b-word. Ya the real b-word. That old mag had so much less resitance, I actually had to work yesterday! Haha.