I spent the morning at the end of the Kenai Spur Highway in Nikiski with Scott from the paper and Rob from Fish and Game tracking radio tagged northern pike that have been illegally introduced into Stormy Lake.

Pike are non-native to this area but have been dumped into a number of river systems and lakes through Southcentral in the last few decades. Where ever they go they cause ecosystem destruction, eating up everything that fits down their gullet before turning on each other and leaving lakes devoid of piscatorial life or full of stunted cannibalistic pike.
This being one of the last bastions for the wild pacific salmon, the threat is not being taken lightly.
I don't want to give much more of the story away from here, so check Sunday's Clarion online or I'll post a link here when I post Sunday night. 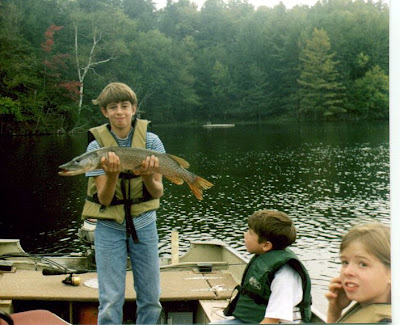 As a kid my family would make a pilgrimage to Saranac Lake, NY area in early September each year to fish for pike and and large mouth bass in the Adirondacks. The onset of cold weather made the fish "snap," causing them to feed voraciously and strike more energetically with the dog-days of summer gone by. This is a reasonable size pike circa 1998.
Pike were one of my favorite target species. I never kept them, they were purely a sport fish. They had me hooked, sorry, both by their fierce looks and predatory habits. The more you thought like them, the better a chance you had at finding one.
They also make spectacular lunges at surface lures and will stalk spoons and spinners like underwater lions, waiting for the right trigger to tell them when to strike. My favorite pike story was the day one leapt out of the water when I jerked a lure out as it approached the boat. I was obviously unaware I had a follower. Feet from the stern, the fish nearly landed in the lap of my friend who had started to doze off.
That woke him up! 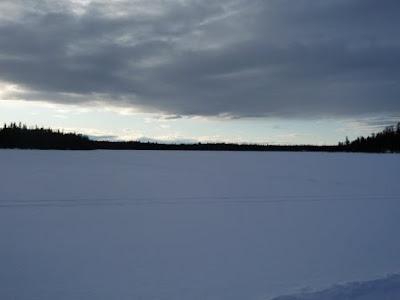 No pike were jumping in Stormy, the lake has a thick sheet of ice over it. 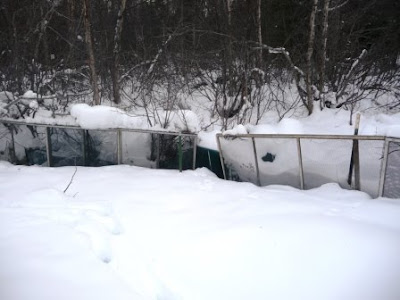 This screen mesh netting at the outlet of the lake is all that has stood between the pike of Stormy and the Swanson River since 2001. The Swanson is a noted rainbow and silver fishery. 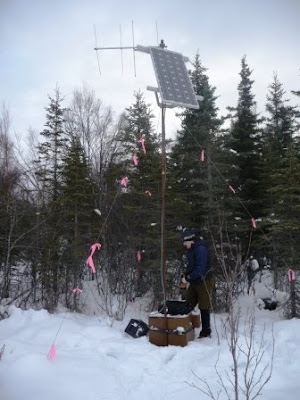 Rob replaces the 12-volt battery at the stationary site which monitors the outlet to see if any of the tagged fish approach it. So far so good this year, but that probably has more to do with the thick ice keeping them out. 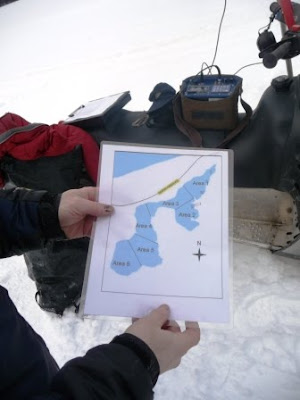 A map of the lake, divided into regions. When Rob finds a fish, he marks it's location to see where its moving from week to week. 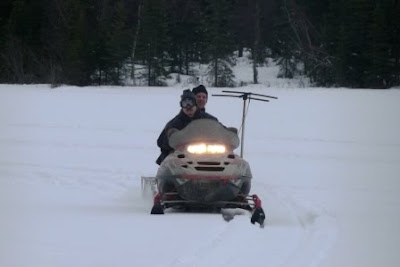 Scott catches a lift back to the car. On the side of the machine, the antennae picks up beeps emitted by the fish so Rob can hone in on them. There's a lot of anglers out there who would probably love one of those. We were able to find most of the tagged fish in the few hours we joined Rob. 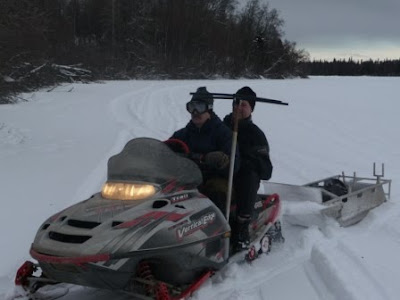