What else would you do on a sunny April weekend in Alaska?
I made a scouting tour up to 4,000' on Tenderfoot Ridge to peek into some north facing couloirs in search of powder on Friday for a potential Saturday expedition...score.

Jack drew up this nice map for his own post, definitely check his pics out too.
Friday, I made my solo run up the ridge on the solid line to the first summit. I knew instantly from what I saw that I'd be back. 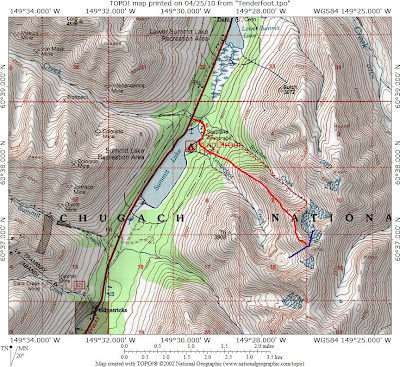 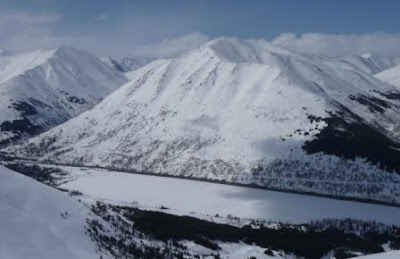 A nice view of Summit Peak. Ptarmigan Rock Bowl is just over the ridge. 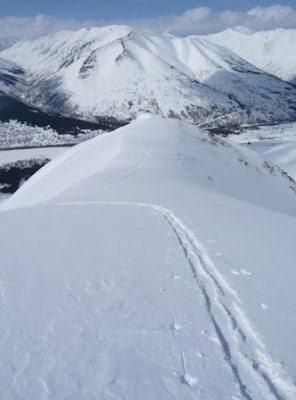 A view back down Tenderfoot. 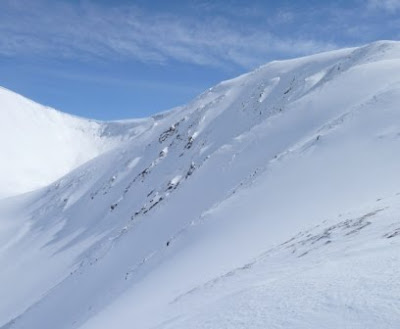 The north facing bowl off of Tenderfoot's first summit. 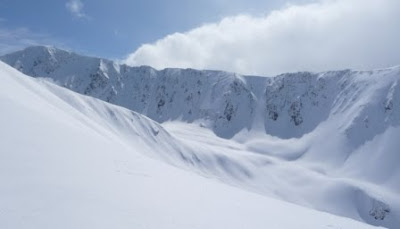 The ridge of wild dreams, aka, the ridge behind tri tip. 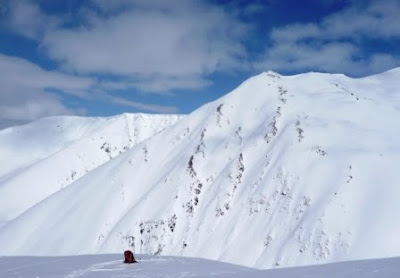 Hale Bop, I believe. I watched my first natural avalanche tumble down this south face when the 5:30 sun hit the slope dead on. Very impressive. 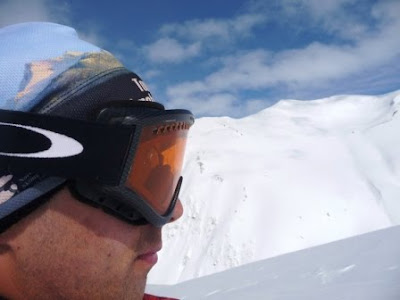 Did I mention it was bright? Two layers of shades (dark tinted sunglasses under the goggles) as I ate lunch. 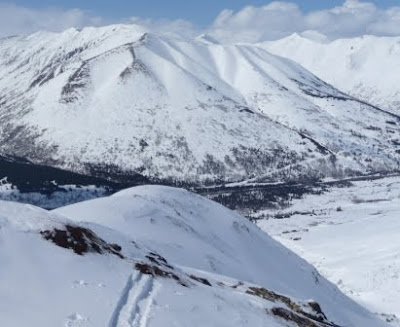 
Some of the bowls dropping off of Tenderfoot's north face looked tempting even solo, but I couldn't see their run outs and I don't really want to burden anyone with having to extract my remains sometime in July when all this snow melts, so I toured back down the ridge line. 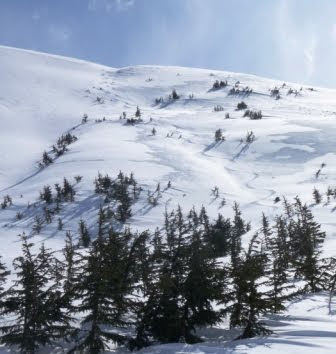 I found nice punchy powder ofnTenderfoot's lower north face.
At the bottom of the lower northface I pulled out my probe and measured the snow depth. Eight feet.
Saturday morning I met up with Coast Guard Jared and we headed up to the trail head. By 10 we were en route, this time following the dashed line on Jack's map, up the bottom of the Butcher Creek Valley north of Tenderfoot Ridge.
The sun having come out with such a force the day before, Tenderfoot's west face was icy and hard so early in the day.
I decided to keep it low for the approach. The valley ended up being a good call as we could scope out potential lines from the bottom. We also found the valley floor to have a neat moraine running right down it's center. 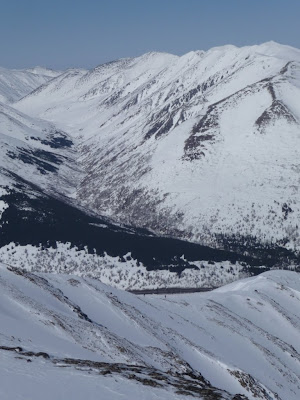 We rounded Tenderfoot's first summit and made our ascent to the ridge line, booting over tundra for the final stretch. Up top we saw Jack and G en route. (CTE) 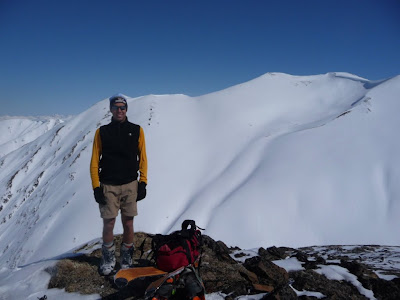 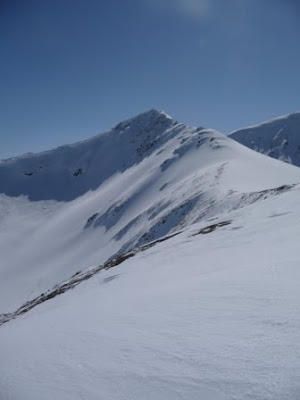 Off of Tenderfoot's "true" summit were two big couloirs. Joined up with Jack, we he headed on over. 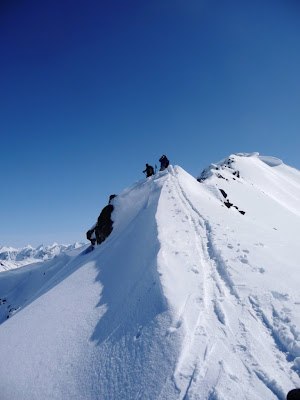 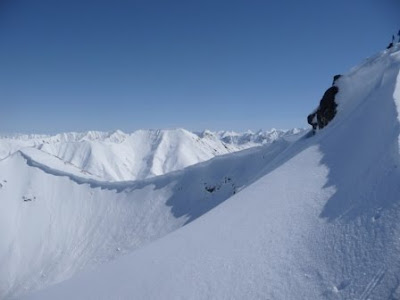 Looking eastward, across the first ridge is Mills Creek, beyond that is Johnson Pass. I love getting high, it totally changes your perspective on stuff. Quote it.
We made a run down the north face, and then took the SFU line back to the ridge making a quad searing rock scramble up the side of one of the couloirs.
Up top, Jack couldn't resist diving over the south side into the head water of Tenderfoot Creek for some sun warmed snow. 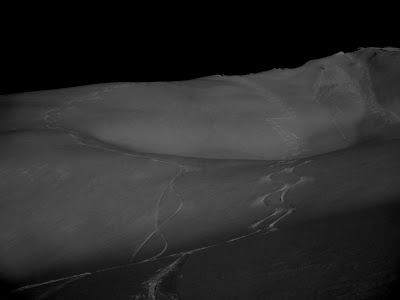 The only way I could get our tracks to pop in the birght snow. Look at those turns though, wow. (CTE) 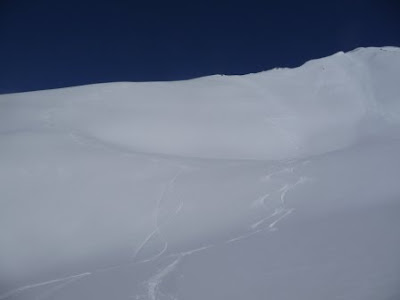 Back up top after a sweaty climb in the sun, we dropped back down the north face one more time before Jack and G had to split.
Jared and I carried on for two more runs in the lookers right couloir. 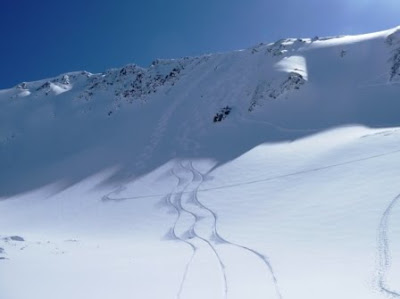 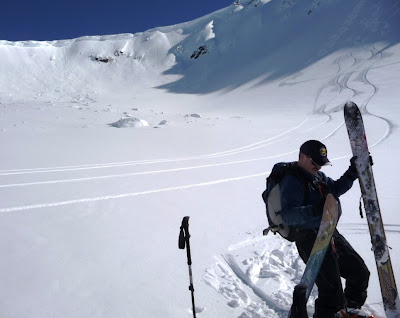 Notice the Subaru Outback wagon sized chunk of cornice in the middle of the bowl that's partially buried. Above it, the cornice still overhangs by as much as 30 feet I think. (CTE) 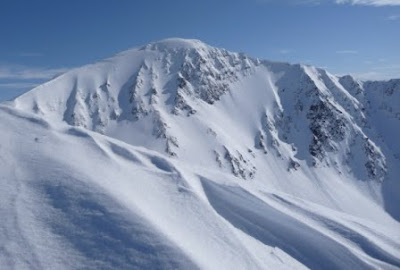 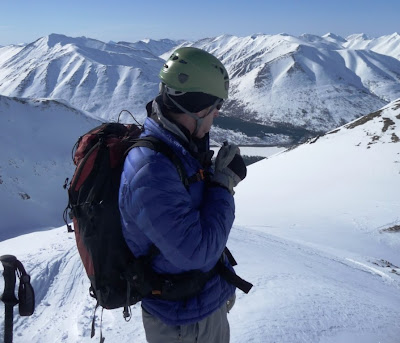 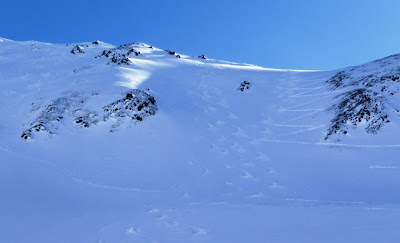 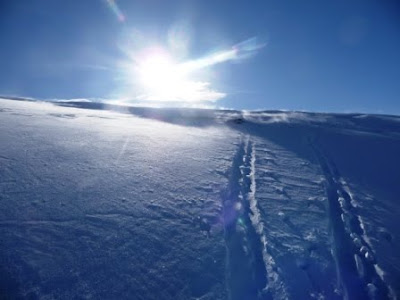 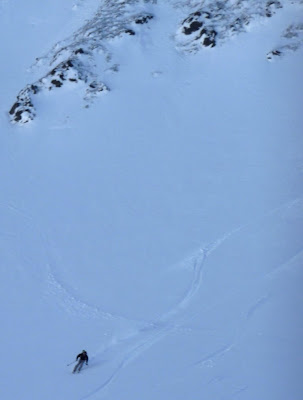 Jared (CTE)
After tracking out the two couloirs, Jared and I scooted across the bowl and launched down Butcher Creek.
With a tailwind helping us out, we tore down the valley carving on top of the moraine.
Once we made it to the the bottom of Tenderfoot's lower north face, we followed my up track from the day before to just below 3,000', made a few scritchy turns on sun crust and then dug into the corn and mashed potatoes on the warm and sunny west face; riding back down to the highway elevation. 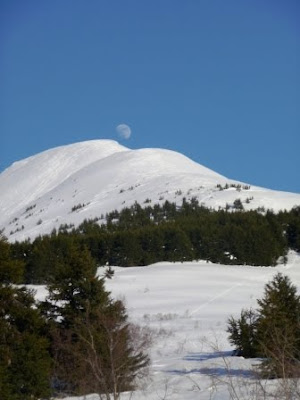