Fall has arrived in the high reaches of the Kenai Peninsula. Don't blink or you'll miss it.
Nothing will ever hold a candle to the vibrant colors of New England at peak foliage season, but for a short time, this place lights up in intense shades of yellow, gold and red that gives the northeast a fair run for its money...plus we don't have all those out-of-state leaf peepers poking around on our roads!
I knew that with bright sun in the forecast I wanted to do a ride in Devils/Resurrection Pass area this weekend, leaving me with a few options. Ideally I was hoping to arrange for a shuttle and ride up Devils Pass to the Resurrection Trail junction, head north over the pass and down to East Creek Cabin (about as far north as it's worth riding on the trail) and then double back continuing on Res to Cooper Landing.
Unable to rally up the forces, and not feeling like doing an out-and-back from Cooper Landing to East Creek, I decided to do the loop, with a combo bike twist.
I've ridden the Devils Pass to Cooper Landing loop before, putting up with the 18.5 mile road ride connection on my fat tire rig.
While the 25 miles of ensuing single track was well worth it, riding a mountain bike on a flat-ish highway is a chore to put it mildly.
Modern full suspension trail bikes like mine aren't really suited to be ridden with the rider in the same position for long stretches. They were intended to traverse terrain where the rider will, by necessity, continually be changing position with fluxxes in trail conditions i.e. up-down-steep climb-switchback-rock garden-etc.
Additionally, the bike isn't geared for speed on the open road, and it's fat knobby (not cheap by any stretch) treads are ground down by the pavement.
As a rule, I try to keep paved road ride connections to 10 miles or less on a trail bike. I'm much more tolerant of dirt roads however like the long Snug Harbor Road, that connects Russian Lakes Trail.
So, in this case, I decided to try something different, and packed up my road bike as well.
On Saturday I headed first to the Devils Pass Trail Head, pulled in and unloaded my mountain bike, found a suitable tree, and locked it up. There, I also left my Camelbak and mountain bike shorts, leaving only food and water in the pack and keeping valuables with me.
I drove back down to the Res Pass Trail Head in Cooper Landing and suited up for a quick 18.5 mile road ride back to Devils Pass Trail Head.
The ride there was uneventful, though the section along the Kenai River is a perilous one for road biking with no shoulder, a windy road and damaged and uneven pavement.
The road ride took an hour, at least a half hour shorter than it would have been to mountain bike as I recall from last summer.
After a quick changeover, I locked up the road bike and hit the trail. 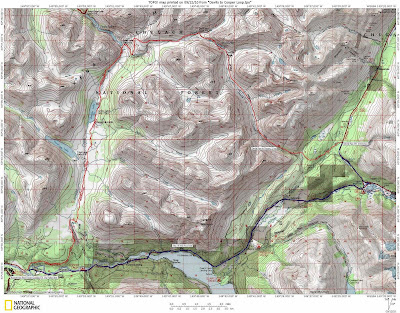 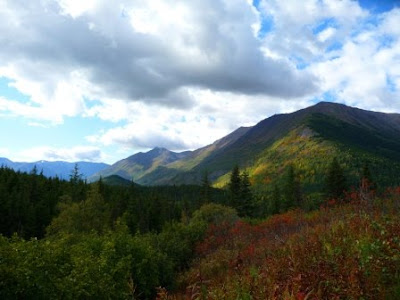 A view south from the power line overlook a mile and a half in. 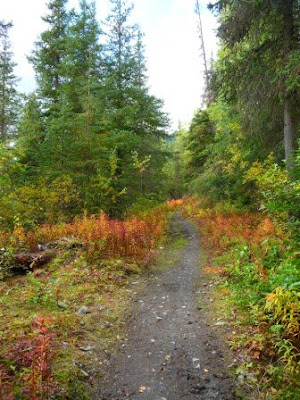 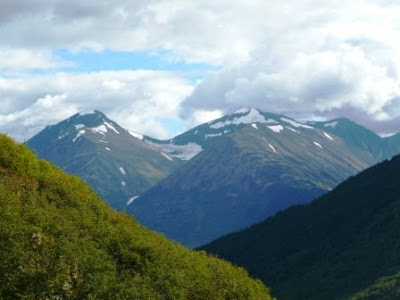 From left, Tern Lake Peak and the north face of Wrong Mountain. 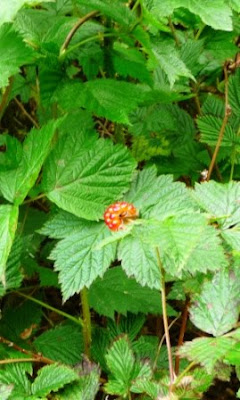 Salmon berries were still around and just as bitter as ever. 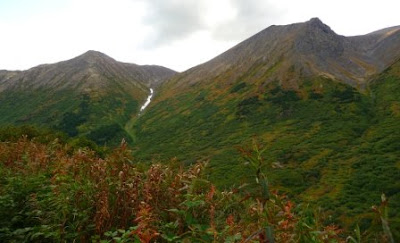 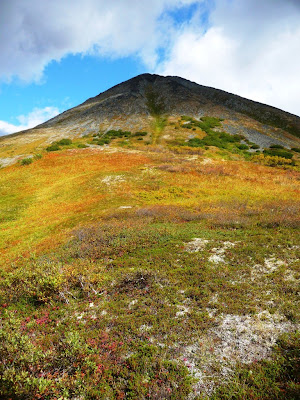 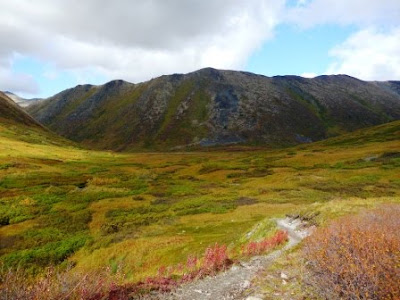 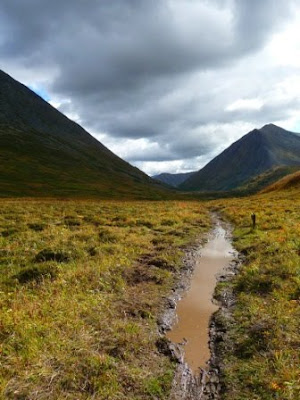 A few muddy wet feet west of Devils Pass. Trail conditions were generally good but it has been a wet summer and sections of the trail were definitely soft. To compound that, not to start a user group mudslinging match (cheese anyone?), but there has been quite a bit of equestrian use and a few places have been torn up. 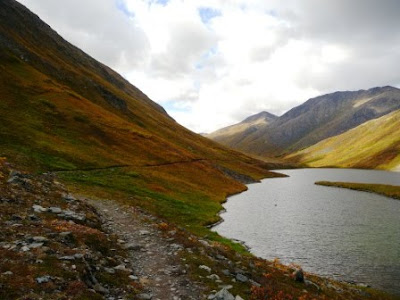 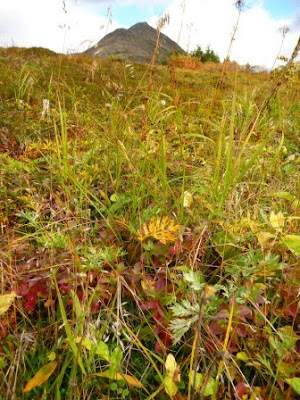 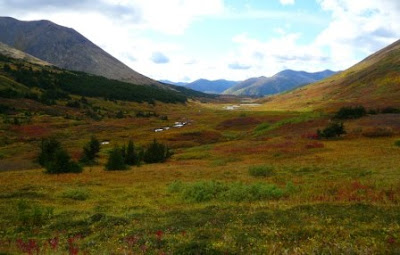 The upper valley south of Resurrection Pass from the junction. 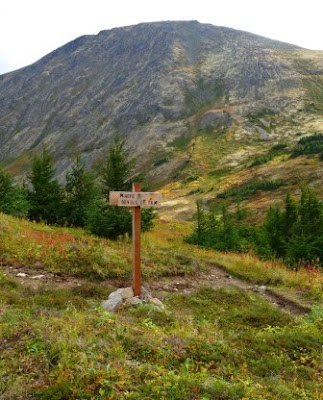 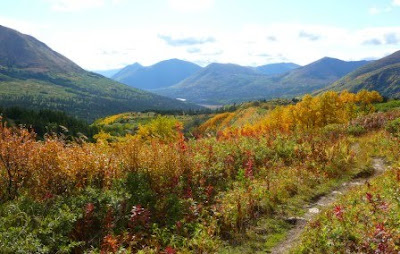 The colors in this area are always especially intense. The little glimmer below is Juneau Lake. 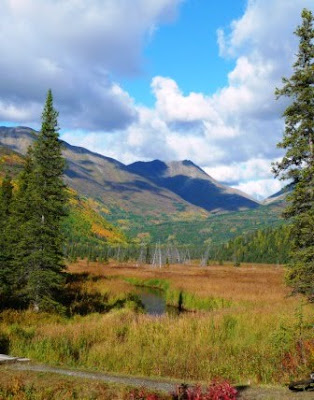 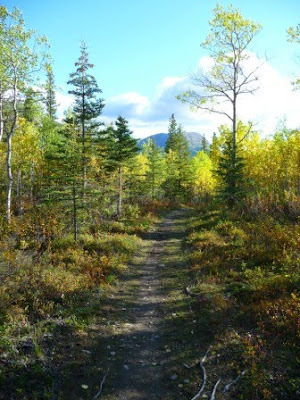 Between Swan Lake and Cooper Landing foliage is mixed. Some stretches looked like this, while others were still lush and green. 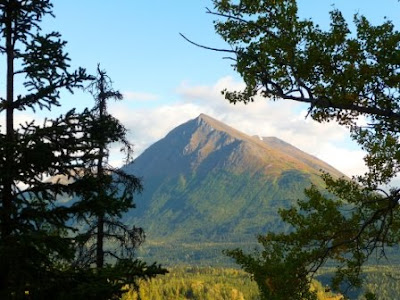 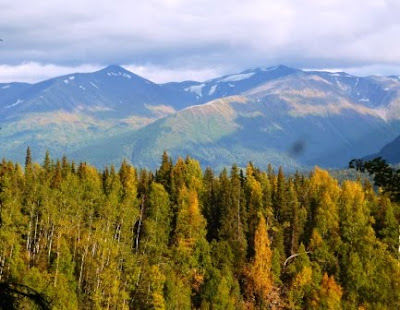 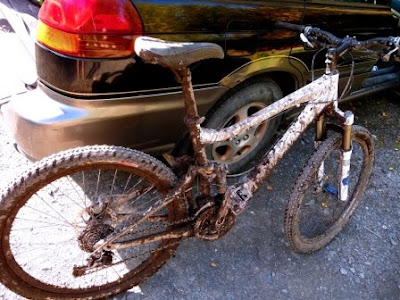 Anyone wanna clean my bike? The good thing is the mud around here, if allowed to dry on, can be cleaned off easily with a stiff bristled brush and a rag.
Is it next weekend yet?
Posted by Dante at 10:00 PM

I'm always so jealous of your adventures but love reading about them! =)